JACKSON • A Hinds County chancery judge on Wednesday issued a ruling that makes it easier for Mississippians with underlying health conditions to vote absentee in this fall’s elections in order to reduce exposure to COVID-19.

In her Wednesday evening ruling, Chancellor Denise Owens said that people “with a chronic illness such as heart disease, diabetes or lung disease” are at a higher risk of developing severe symptoms from the virus and should “stay home as much as possible” and be allowed to vote absentee instead of voting in-person at a polling precinct.

Secretary of State Michael Watson, a defendant in the suit and the elected official who oversees the state’s election process , appealed the ruling on Thursday. 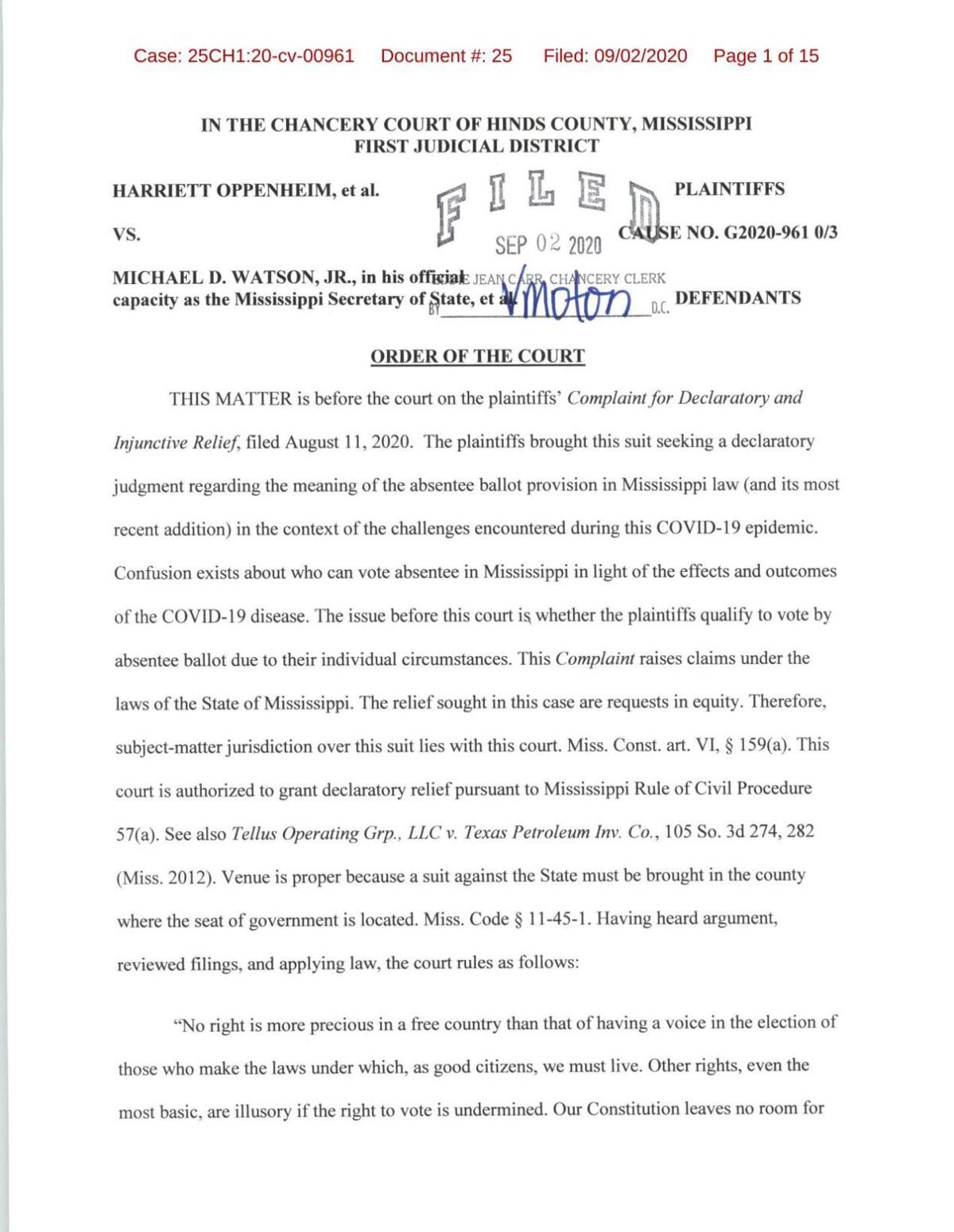 “The appeal is an effort to receive clarification for our Circuit Clerks, so they know exactly what does and does not equate to a “temporary disability” under the statute,” Secretary of State Michael Watson said. “The goal is to make sure the application of the term is consistent for every Mississippi voter.”

The suit questioned the state’s absentee voting laws by arguing that recent changes in voting laws were insufficient and that individuals with underlying health conditions needed a safe alternative to voting in person.

This past legislative session, the Mississippi Legislature temporarily amended the state’s absentee voting laws with House Bill 1521, which allowed people under a physician-imposed quarantine, or those who care for or are dependent upon someone who is under a physician-imposed quarantine, to vote via absentee ballot. The legislation otherwise left voters with few alternative means to cast a vote.

The order stopped short of allowing people to vote absentee if they wish to avoid polling places to limit their chances of contracting the virus through in-person, community transmission.

Critics argued that with a presidential election, a new state flag design and a medical marijuana initiative all on the ballot, voters would likely turnout at a higher rate than a typical election and create a scenario in which some people would feel compelled to choose between their health or participating in the election.

The legal organizations called the lawsuit a victory, but argued that the court should have gone further to rule that all Mississippi voters have the right to vote by absentee ballot during the pandemic.

“The Court correctly concluded that Mississippi voters may vote absentee if they have medical conditions that will lead to particularly severe consequences if they contract COVID-19,” said Rob McDuff, an attorney who represented the plaintiffs in the suit. “But we believe the right to vote extends even further and requires that absentee voting be available to all Mississippi voters who are following public health guidance and avoiding community events during this pandemic.”

“Voters should not have to choose between their health and their vote,” said Vangela M. Wade, the president and CEO of the Mississippi Center for Justice. “We are doing everything we can to insure they are not forced to make that decision.”

TUPELO • After one of the nation’s top infectious disease agencies released new data about the number of people who have died from COVID-19, M…