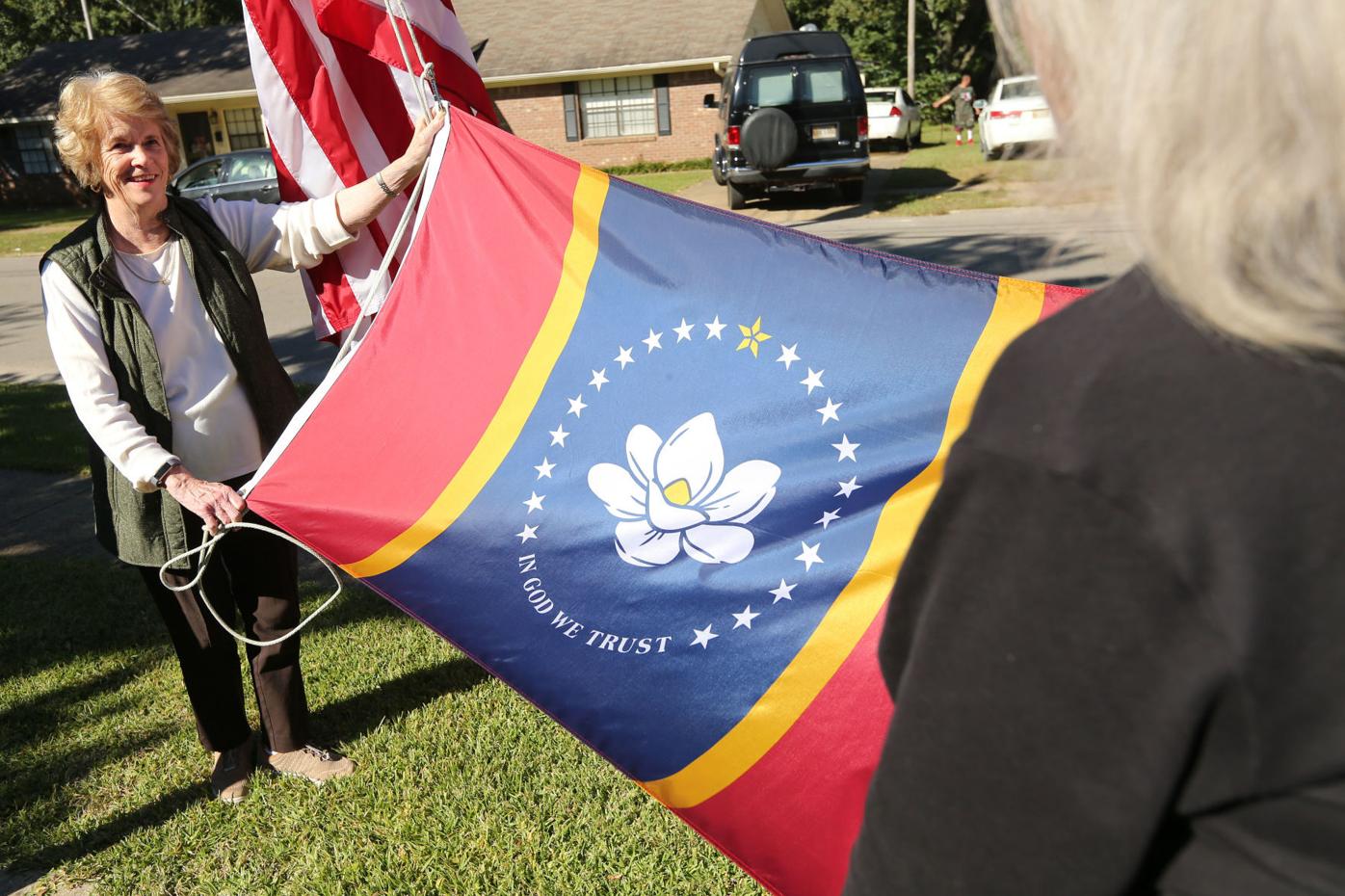 Betsey Hamilton, left, a New Albany resident who sat on the nine-member Commission to Redesign the Mississippi State Flag, and Jill Smith, director of the Union County Heritage Museum, raise the proposed state flag at the Museum on Tuesday in New Albany. Voters will decide whether or not they approve the new design during the Nov. 3 general election. 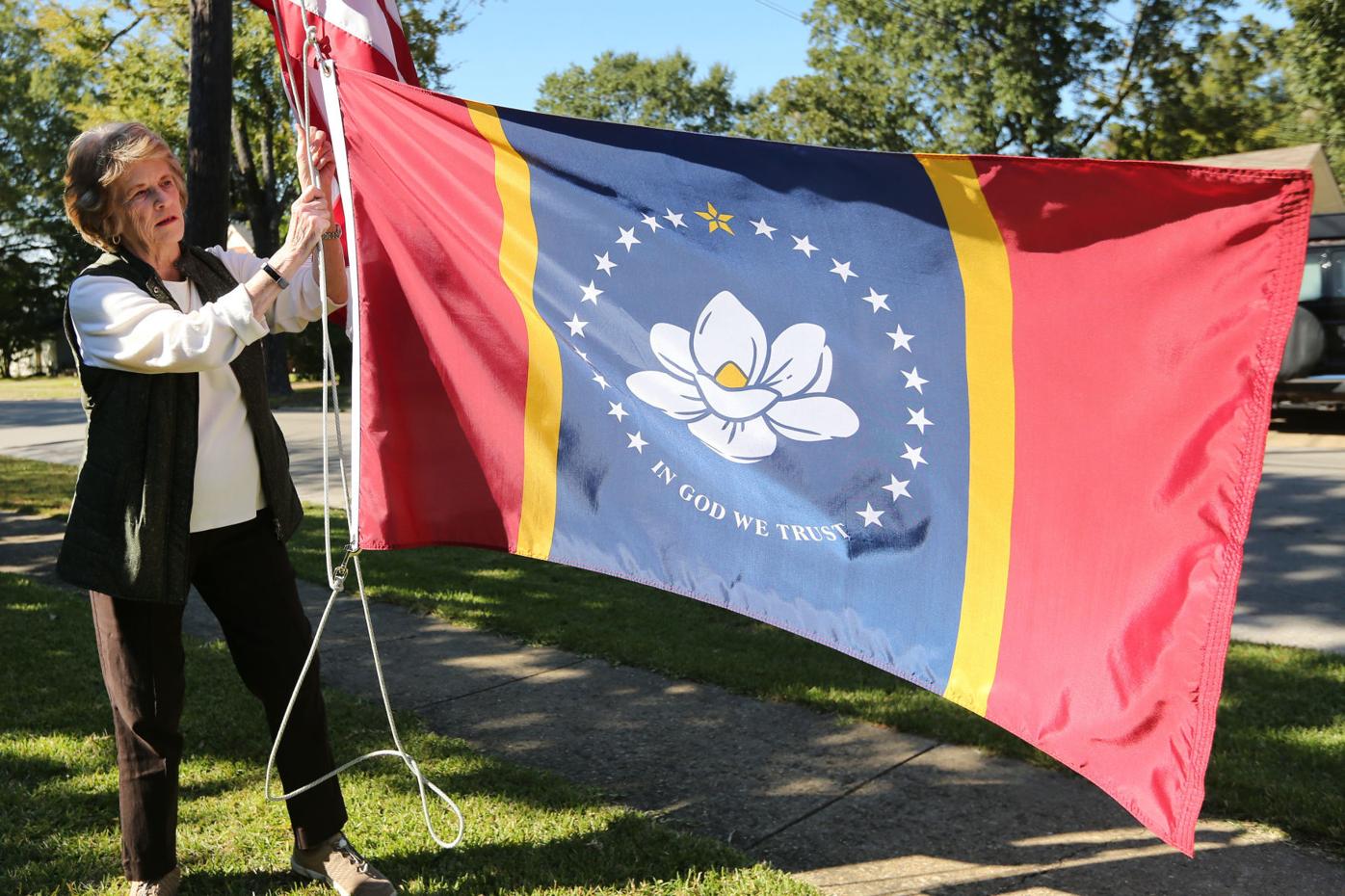 Betsey Hamilton of New Albany, who sat on the nine-member Commission to Redesign the Mississippi State Flag, raises Mississippi’s proposed state flag at the Union County Heritage Museum on Tuesday in New Albany. Voters will decide whether or not they approve the new design during the Nov. 3 general election. 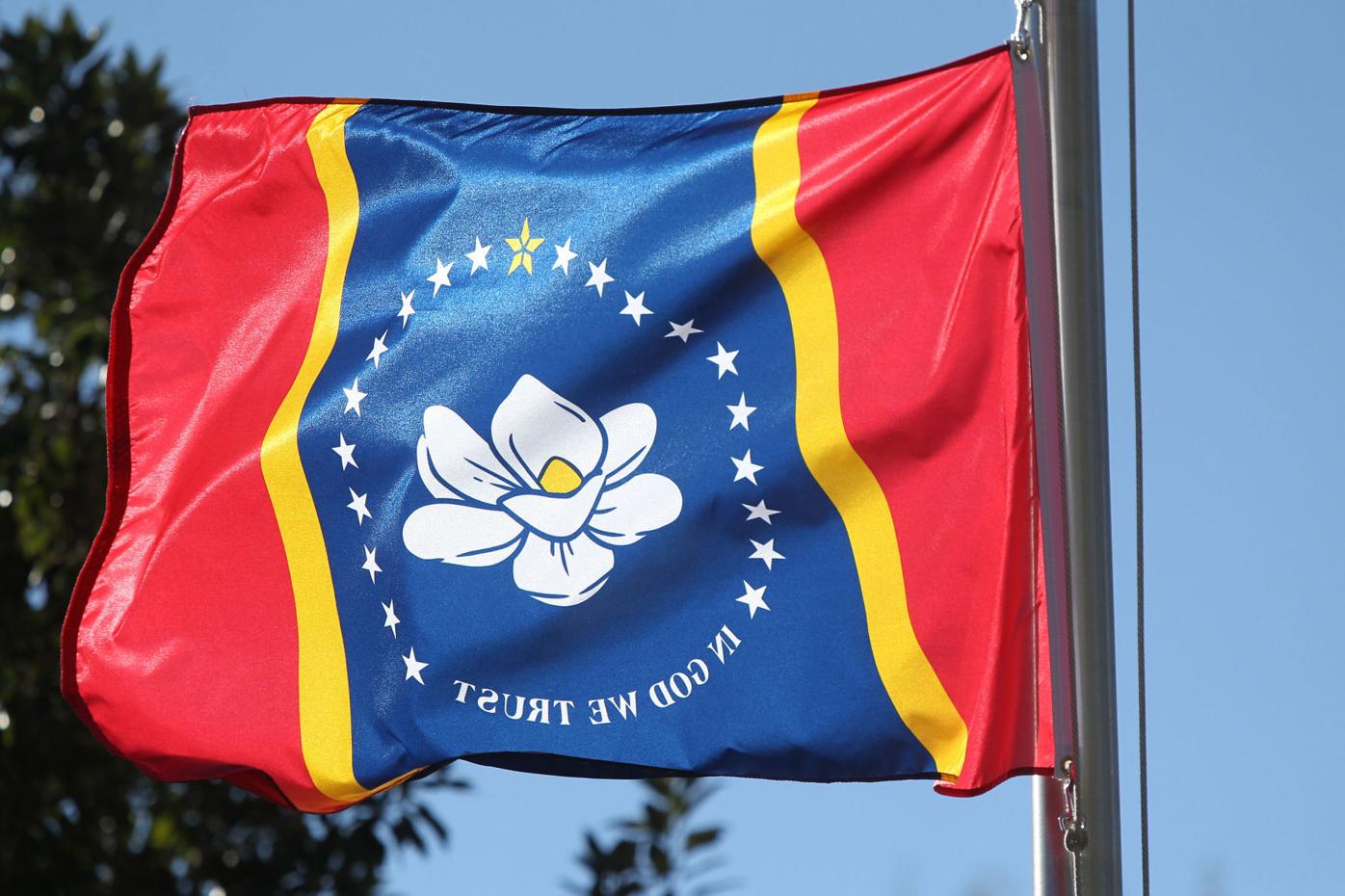 The new Mississippi State flag flies on display at the Union County Heritage Museum on Tuesday in New Albany.

Betsey Hamilton, left, a New Albany resident who sat on the nine-member Commission to Redesign the Mississippi State Flag, and Jill Smith, director of the Union County Heritage Museum, raise the proposed state flag at the Museum on Tuesday in New Albany. Voters will decide whether or not they approve the new design during the Nov. 3 general election.

Betsey Hamilton of New Albany, who sat on the nine-member Commission to Redesign the Mississippi State Flag, raises Mississippi’s proposed state flag at the Union County Heritage Museum on Tuesday in New Albany. Voters will decide whether or not they approve the new design during the Nov. 3 general election.

The new Mississippi State flag flies on display at the Union County Heritage Museum on Tuesday in New Albany.

Editor’s note: Between now and Election Day on Nov. 3, the Daily Journal will publish a series of articles exploring key races and issues that will go before voters on the ballot.

TUPELO • State leaders took historic steps this year to retire Mississippi’s divisive state flag, which featured a Confederate battle emblem; in November, voters will get the final say in how the new state flag will look.

Mississippi’s Nov. 3 election will feature three statewide ballot referendums. Ballot measure 3 will ask voters to approve or reject a proposed design for the new state flag. If a majority of voters approve the design, the Mississippi Legislature will then vote to formally adopt it as the new flag. If a majority of voters reject the proposal, a state-sanctioned commission will again design a new flag for voters to either approve or reject.

Either way, voters in November won’t have any mechanism to bring back the former state flag, which was the last in the nation to feature the Confederate battle flag. Instead, voters face the choice of what will replace the now-retired flag.

Ballot measure 3 will display a picture of the proposed design and ask voters to either indicate support of adopting the design as the new flag by voting “yes,” or opposition to the design by voting “no.”

The proposed design is a red and blue flag with gold bars and prominently features a magnolia blossom, the state’s flower. The flag contains 20 white stars to represent Mississippi as the 20th state admitted to the union, one gold star to symbolize the Native Americans that originally settled in the state and contains the phrase “In God We Trust.”

Oxford Mayor Robyn Tannehill, who sat on the nine-member commission that proposed the flag design, called its inclusion on the ballot a “real turning point for our state.”

“I think it is a way to say to the rest of the nation that we are moving forward,” she said.

Legislators gave the state flag commission two parameters for designing the flag: it had to say “In God We Trust” and could not feature the Confederate battle emblem. Other than those stipulations, the commission could virtually design any state flag it wanted.

After looking at over 3,000 submissions, the commission voted in September to put the “In God We Trust” flag on the ballot for consideration by Mississippi’s voters.

“I believe that the commission selected a flag that represents everyone in Mississippi,” Tannehill said. “And that was the goal. It’s a handsome flag and one that we can be proud to fly.”

The former flag has long been a point of contention in Mississippi and was frequently seen as a symbol of hate and division because of its inclusion of the Confederate battle emblem, which has become increasingly associated with white supremacy groups.

Still, retiring the flag remained a thorny political issue, and many thought it would be decades before state leaders would agree to change the flag.

In July, elected officials bowed under increasing national scrutiny of the flag in the wake of nationwide protests of racial injustice and police brutality and after political, athletic, religious and business organizations supported changing the flag.

The conversations surrounding this ballot referendum stand in stark contrast to the tenor surrounding the last time Mississippians voted on a proposal to change the state’s flag. In 2001, a separate flag commission recommended that a new flag be put before voters, but it was rejected by an overwhelming majority.

Jack Reed, Jr., the owner of Tupelo-based Reed’s department store, said the difference in the debate in 2001 versus now is almost unbelievable. His father served on the 2001 flag commission, and as a result, people boycotted his store over the family’s participation.

“It just shows you that this really can be done,” Reed said of the current flag proposal. “It was exciting, with a lot of people working all over the state with their representatives. It was just really an exciting experience.”

State Rep. Rickey Thompson, a freshman lawmaker from Tupelo, said he was almost in disbelief that he cast a vote to retire the old flag in his first year serving at the state Capitol, but was happy elected officials coalesced around this issue.

“It was exciting. We came to a consensus,” said Thompson, who is Black. “Republican and Democratic representatives came together to make this happen for the state of Mississippi.”

Despite the wide swath of organizations uniting to create a new flag, there are still some in the state who feel betrayed because the decision whether to keep or retire the previous flag was not brought before voters.

Leaders of Let Mississippi Vote, an organization of Mississippi voters, are currently in the process of filing necessary paperwork while coordinating with volunteers across the state. After all of its paperwork is approved, it can start gathering signatures in an effort to place the measure on the ballot.

Lauren Smith, a resident of Tupelo, is one of the leaders of the Let Mississippi Vote organization and said that true intent of the group is not to advocate for one flag over another, but rather to give voters a true choice in what design will become the state flag.

“It’s not to stack the deck against one flag or another,” Smith said. “It’s simply to give the people a choice. Only having one flag on the ballot is not a choice.”

Betsey Hamilton, a New Albany resident who served on the flag commission, said that even if people might disagree about the way in which the flag was changed, this is still a chance for positive attention to come to Mississippi.

“So many times in our past, when legislators, business leaders, and citizens have come together for good reasons, good things happen,” Hamilton said. “While we might not all agree on the procedural manner that got us to his point, the important matter is that we are here. We now have an opportunity to vote for a new Mississippi state flag and a brighter future.”

Some business leaders have concerns that voters may think the flag change inevitable and that turnout could be low.

Scott Waller, the CEO of the Mississippi Economic Council, said he hopes people will vote from the top of the ballot to the bottom, which is where the flag referendum will be located. As a precaution, the MEC and other business and civic organizations have established the “In God We Trust Flag Committee” to launch advocacy campaigns to educate voters on the importance of the issue.

“The whole purpose is to make sure that people understand that they have an opportunity to be part of history,” Waller said. “When you think back at this, history was made when the state Legislature retired the old flag. We have a second opportunity to make history by voting this in as the new flag.”

The campaign plans to get its message out through yard signs, flags, social media ads and other ways to encourage voters to adopt the new design.

Ballot measure 3 will be at the bottom of the ballot alongside other ballot referendums, as well as elections for U.S. president, U.S. congressional offices and state judicial races.

Editor’s note: Between now and Election Day on Nov. 3, the Daily Journal will publish a series of articles exploring key races and issues that…