TUPELO • Even though Mississippi’s statewide mask mandate expired on Wednesday evening, local mask orders will still exist in many cities in Northeast Mississippi.

Tupelo Mayor Jason Shelton issued a local executive order on Wednesday evening that requires people in Tupelo to wear a mask when in public buildings and businesses. The order will expire at 5 p.m. on Nov. 11 but, Shelton said, realistically, a local mask mandate will last until “the medical professionals say it isn’t needed.” 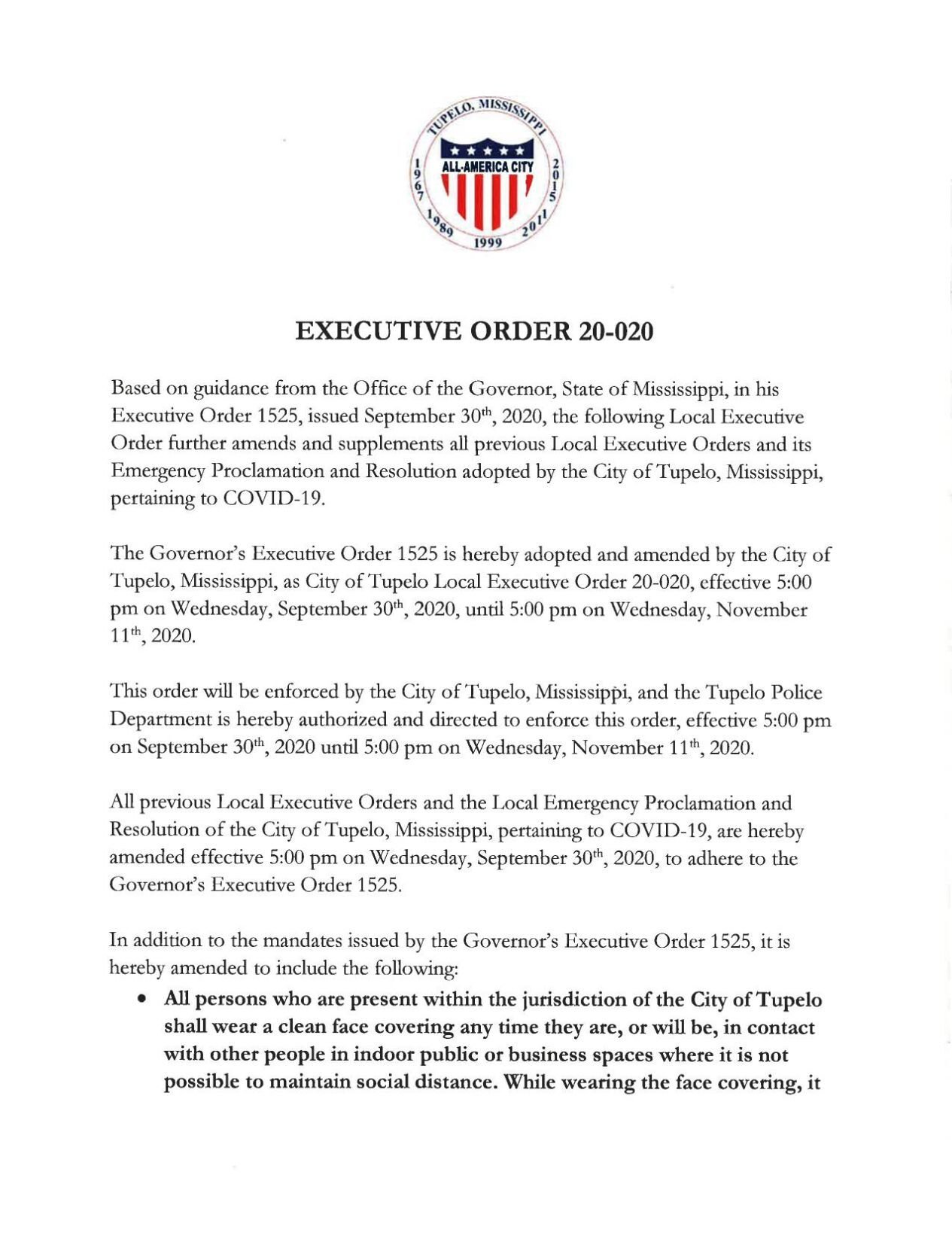 City leaders in Oxford and Starkville also announced on social media that they would have local mask orders in effect in their respective towns, despite the suspension of the statewide order.

Gov. Tate Reeve on Wednesday afternoon announced that the state’s mask mandate will largely expire and that several other statewide COVID-19 safety restrictions will be rolled back.

Under Reeves’ latest executive order, Mississippians will only be required to wear a face covering when they are inside a school building or classroom, when outdoors at a school campus, at sporting events and at close contact businesses such as salons and tattoo parlors. The order will go into effect at 5 p.m. on Wednesday and expire at 5 p.m. on Nov. 11.

“I want to be clear: I still believe that masks work,” Reeves said at a Wednesday press conference. “I think the facts and the data in our state and across this country bear that out. I still plan to wear one, and I expect that most people in our state will still wear them often. It is the smart, it is the prudent and it is the wise thing to do. But there is a difference between something being wise and something being a government mandate.”

The order also relaxes several of the state’s previous coronavirus restrictions and now allows up to 50% attendance capacity at extracurricular school events like football games.

Restrictions on public gatherings are also tweaked under the latest order, allowing no more than 20 people indoors and more than 100 people outdoors when social distancing is not possible. This limit on gatherings does not apply to religious buildings, voting precincts or students in classrooms.

Reeves’ decision to end the statewide mask mandate comes as several other states, including the surrounding states of Louisiana and Alabama, still require residents to wear a mask in public.

Dr. Thomas Dobbs, the state’s top health expert, at the Wednesday press conference did not directly address whether he thought Reeves’ decision to end the mask mandate was the correct decision. He still encouraged people to wear masks, but said he understands people’s beliefs about personal liberties.

“I encouraged the governor to look at the data, and he always does,” Dobbs said.

The statewide total number of COVID-19 cases surpassed 100,000 with the latest report from the Mississippi State Department (MSDH) on Saturday.