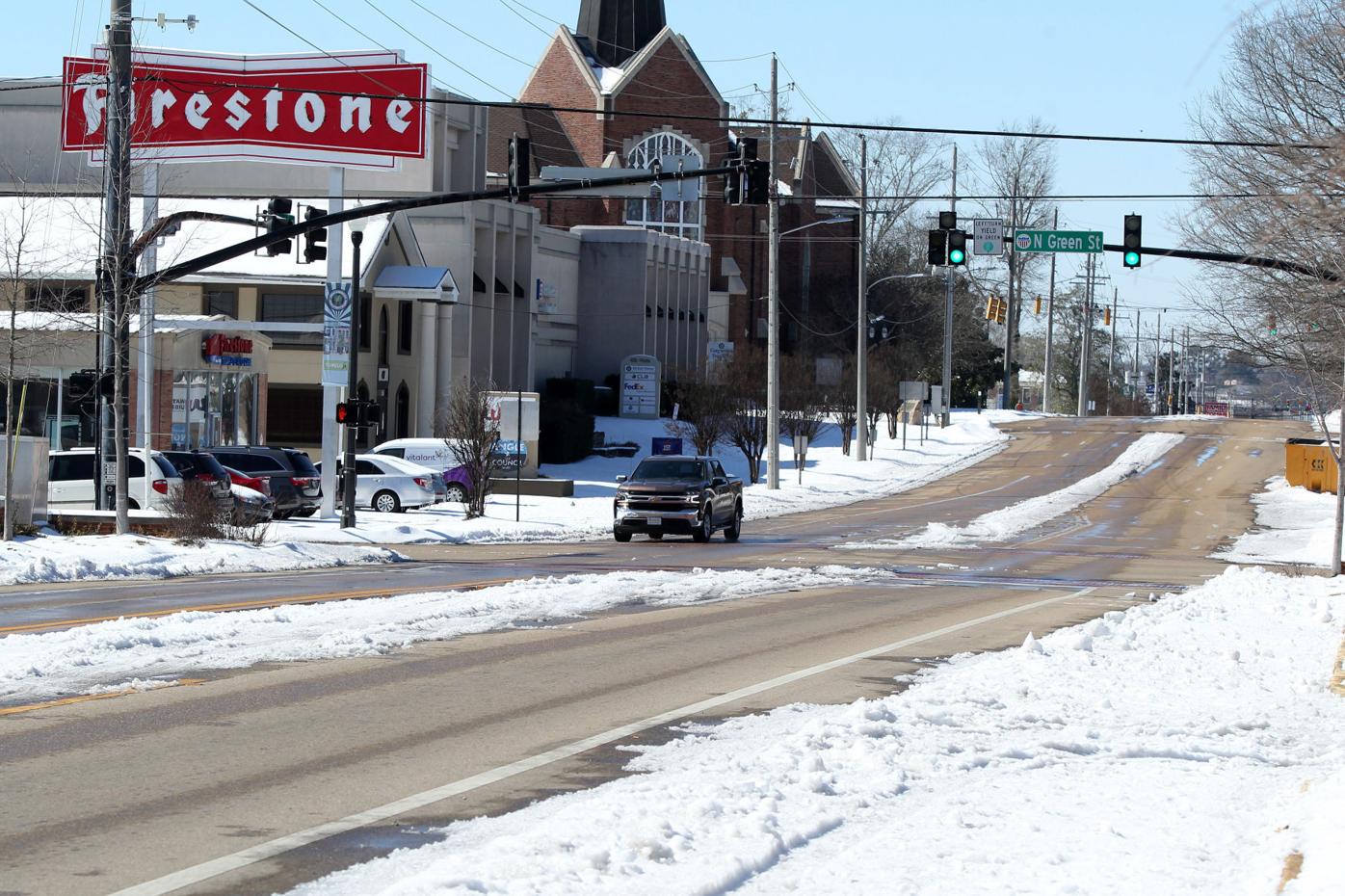 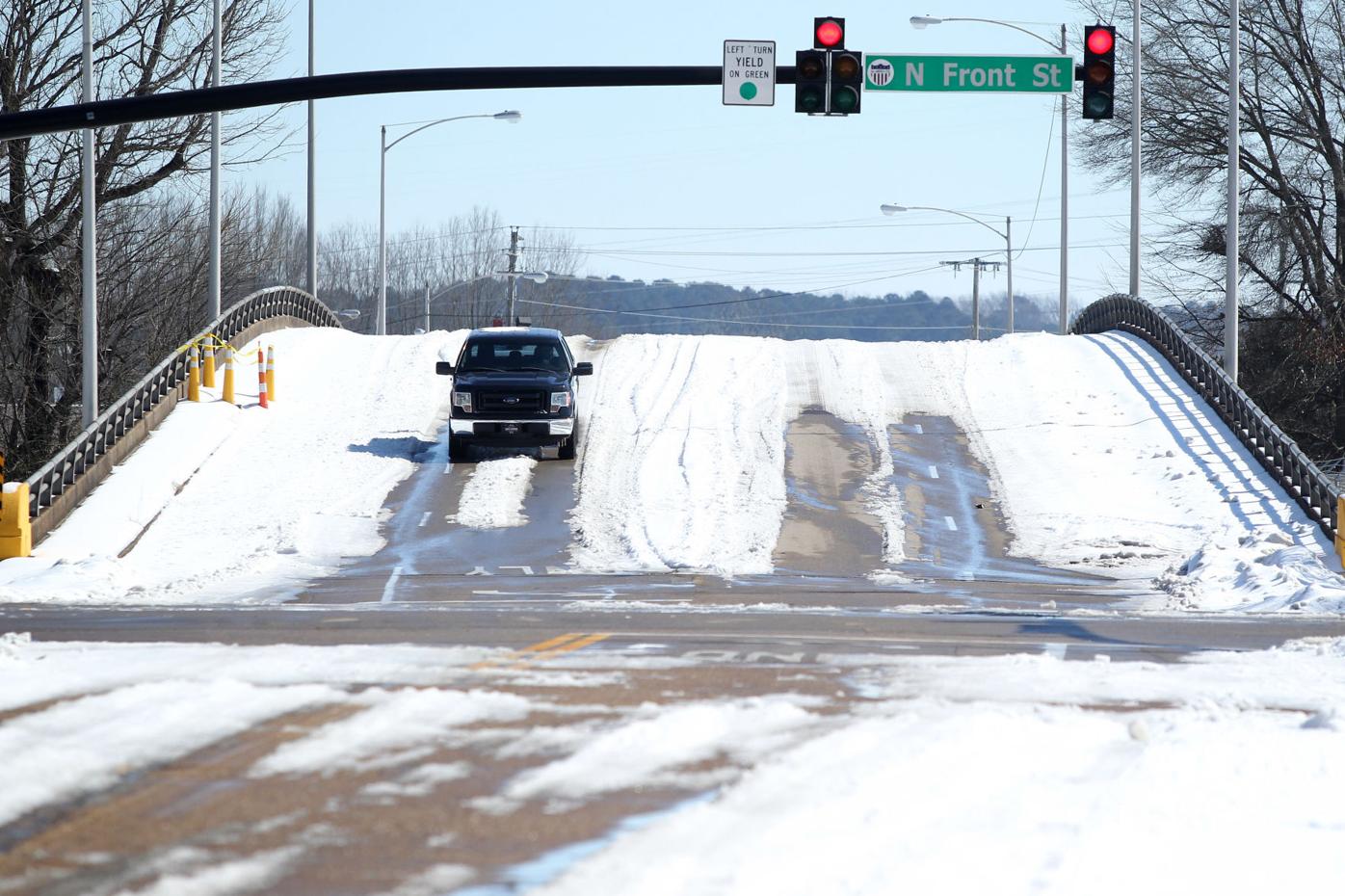 A truck travels west down the Franklin Street bridge on Friday morning in Tupelo. 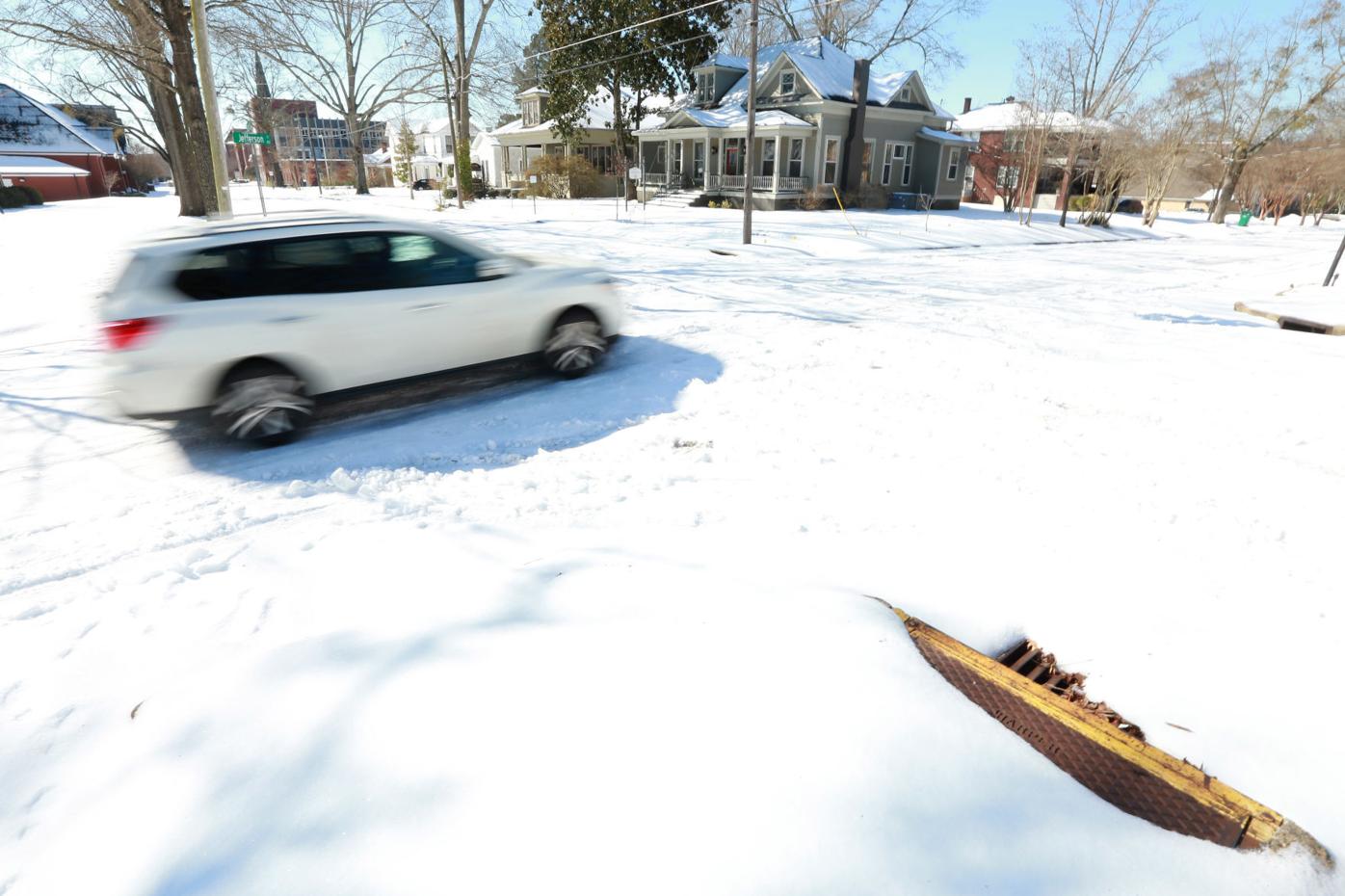 A car travels west on Jefferson Street Friday morning in Tupelo. As the sun comes out most of the ice and snow turned to turn to slush and melt on major roads. Neighborhood streets are still packed with ice and snow.

A truck travels west down the Franklin Street bridge on Friday morning in Tupelo.

A car travels west on Jefferson Street Friday morning in Tupelo. As the sun comes out most of the ice and snow turned to turn to slush and melt on major roads. Neighborhood streets are still packed with ice and snow.

TUPELO • Although sunshine and warmer daytime temperatures have begun melting the blanket of ice that has covered the region for a week, making travel along Northeast Mississippi’s roads a little safer, officials caution it could be Sunday or the first of the week before roads, especially those that are less traveled, are completely clear.

Officials across Northeast Mississippi, including Saltillo Police Chief Grant Bailey, are asking people to wait a little longer before venturing outside.

“There are still many roads around the city in very bad condition,” Bailey said. “If we hang tight, in a day or so we should be in a better road conditions situation.”

With the help of sunshine and temperatures reaching the upper-30s by afternoon, city, county and state road crews hit the roads Friday morning to clear as much ice and slush from the roads as possible.

“When you have sunshine at even 25 degrees, any black pavement showing will warm up and start melting the ice,” said Mississippi Department of Transportation district engineer Mark Holley. “Once that happens, it allows the snow plows to get in there and remove the ice.”

“We were able to get at least one lane cleared on most of the four-lane roads,” he said.

MDOT crews moved from the four-lanes and started clearing secondary roads Friday. They continued Saturday and will do so Sunday if still needed.

By mid-afternoon Friday, the combination of sunshine and temperatures in the upper 30s were having an effect on roads across the region. Law enforcement officials across Northeast Mississippi gave the same report: Major roads were essentially clear, but side streets and county roads were still covered with ice.

Chuck Williams with Tupelo’s Public Works Department on Saturday said roads are getting better as the morning and afternoon sunshine continues to melt the ice.

“All the main roads are in good shape and passable, Williams said. “Our secondary roads are getting better. We’re going to continue to work on some our back roads later today and hope to have everything finished for the new week.”

In the coming days, Mother Nature will give work crews a big assist in clearing the roads. The clouds associated with winter storms Uri and Viola have moved out of the region. The remaining clear skies mean plenty of sunshine on Saturday and Sunday. That lack of cloud cover will also allow the temperatures to briefly drop below freezing at night, causing minor setbacks.

The National Weather Service in Memphis predicts that once the temperature gets above 32 degrees Sunday morning, the temperature won’t drop below freezing for at least two weeks. The forecast high for Tuesday in Tupelo is 60 degrees.

The sunny and warming conditions Friday enticed many more drivers out, even though conditions were still hazardous in some places. Extra vehicles may actually help to clear and dry the roads. The weight of the additional traffic can melt ice, turning it to slush which can drain off the road. Tires will also turn melting ice to spray, which is carried off the road and into the ditches to drain, instead of refreezing on the road at night.

“As more and more cars travel along the roads, that will help dry the roads,” said Mississippi Highway Patrol Troop F spokesman Staff Sgt. Bryan McGee. “Over the next few days, we will see a vast improvement in the roads. It’s only going to get better.

“By Tuesday, hopefully, the majority of the ice will be gone. I haven’t seen the sheer amount of ice on the roads in my life. Even in the ice storm of 1994, we didn’t have this much ice, and it didn’t stay around as long.”

While the ice caused temporary inconveniences for motorists, it will cause a rash of potholes in the coming weeks and could cause long-term problems for the road surface and the roadbed.

Small cracks in the pavement allow moisture from ice and snow to seep into the subgrade. When that water freezes, it expands. The repeated thawing during the day and refreezing at night can compromise the structure and stability of the roadbed.

“Next week, potholes will be everywhere,” Holley said. “We already know several sections that will be bad, like the Highway 45 and Highway 25 intersection. The time it takes for subgrades to show heavier cracks will depend on the traffic, especially heavy truck traffic. It will show up first on two-lanes with high traffic because all the weight is on that one lane.”

In the coming month, MDOT crews will be inspecting roads to make note of the obvious potholes but also any growing cracks that could lead to more serious problems. City and county road crews will do the same thing on secondary and local roads and streets.

Lee County Road Manager Tim Allred is bracing for the certainty that some already degraded county roads will soon be a lot worse.

Once he has a full accounting of road conditions, Allred said he can assess long-term maintenance needs.

“It’s going to be a work in process,” Allred said. “It may change the four-year road program. If I had a crystal ball, I’d sure look at it and let you know.”

Caleb Bedillion and Jayson Burnett contributed to this report.

“By Tuesday, hopefully the majority of the ice will be gone. I haven’t seen the sheer amount of ice on the roads in my life. Even in the ice storm of 1994, we didn’t have this much ice and it didn’t stay around as long.”

Live Updates: The latest on winter weather across Northeast Mississippi

PHOTOS: Much of Northeast Mississippi covered with snow, ice