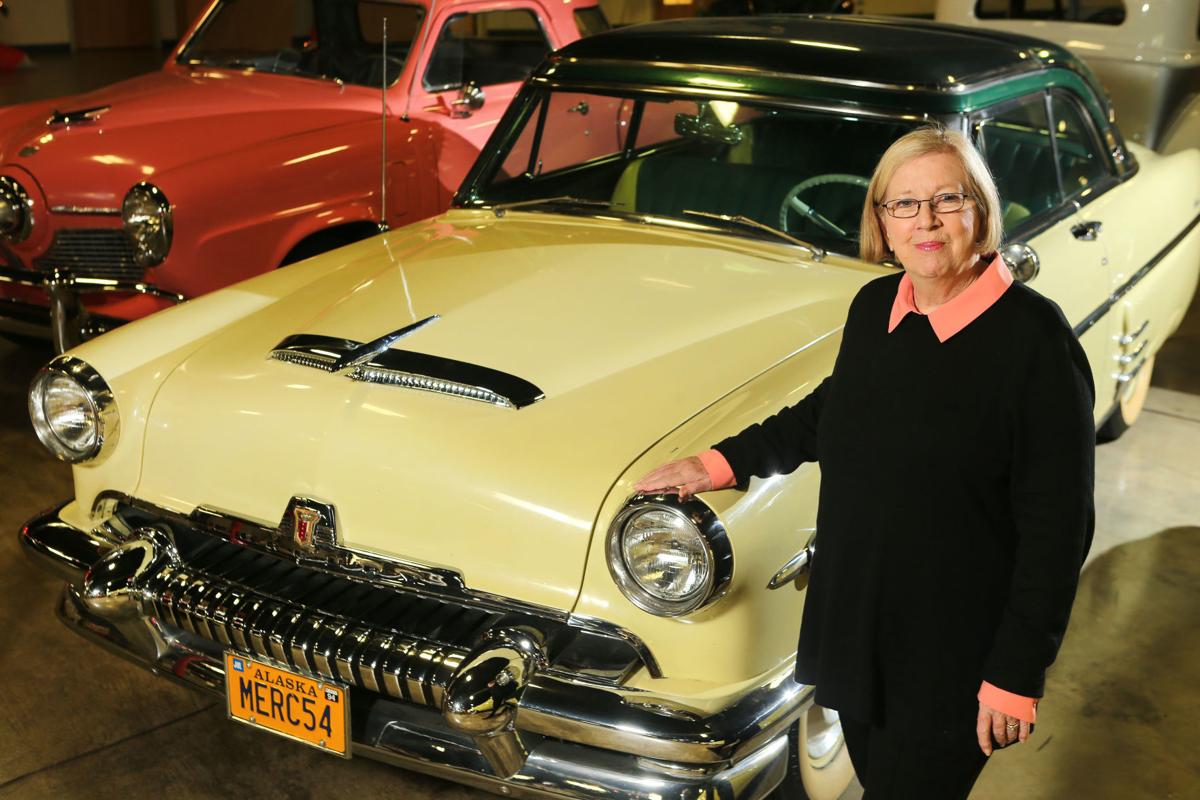 Jane Spain, curator of the Tupelo Automobile Museum, stands next to the 1954 Mercury Sun Valley, a car she rode home in from Alaska with her husband, Frank, after buying the car for his collection. 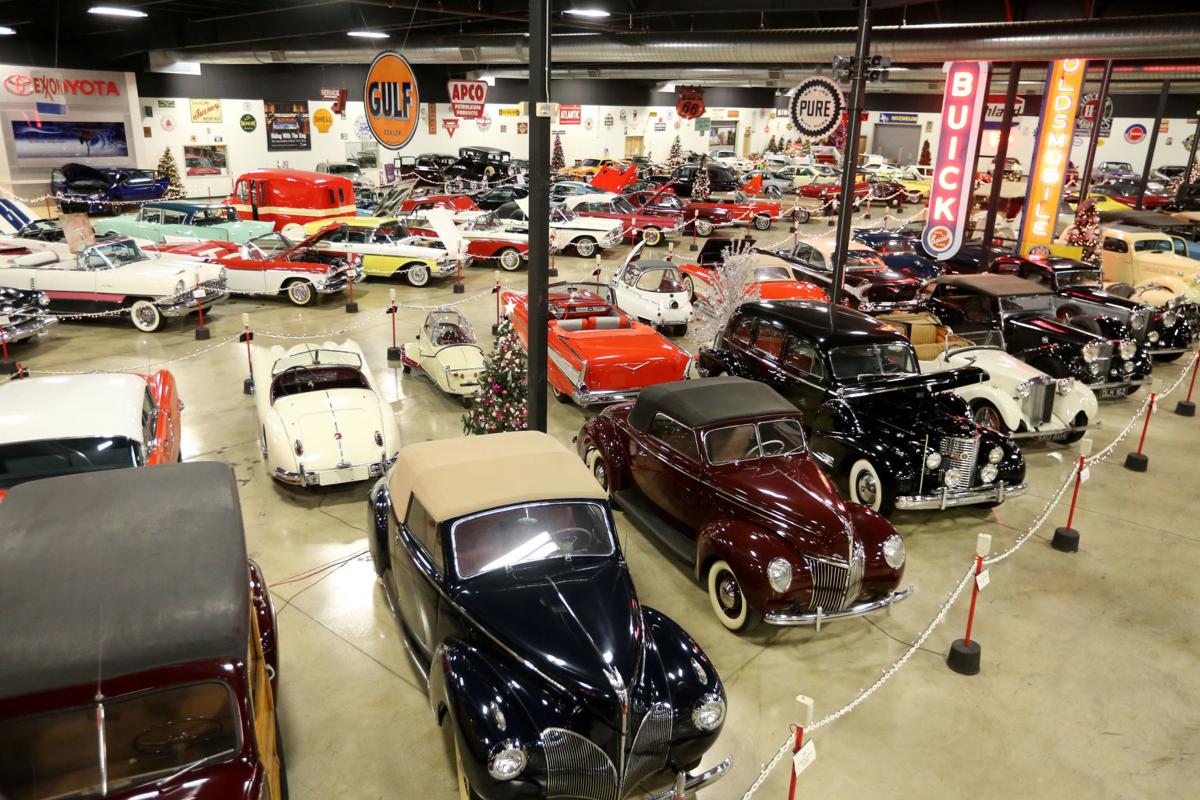 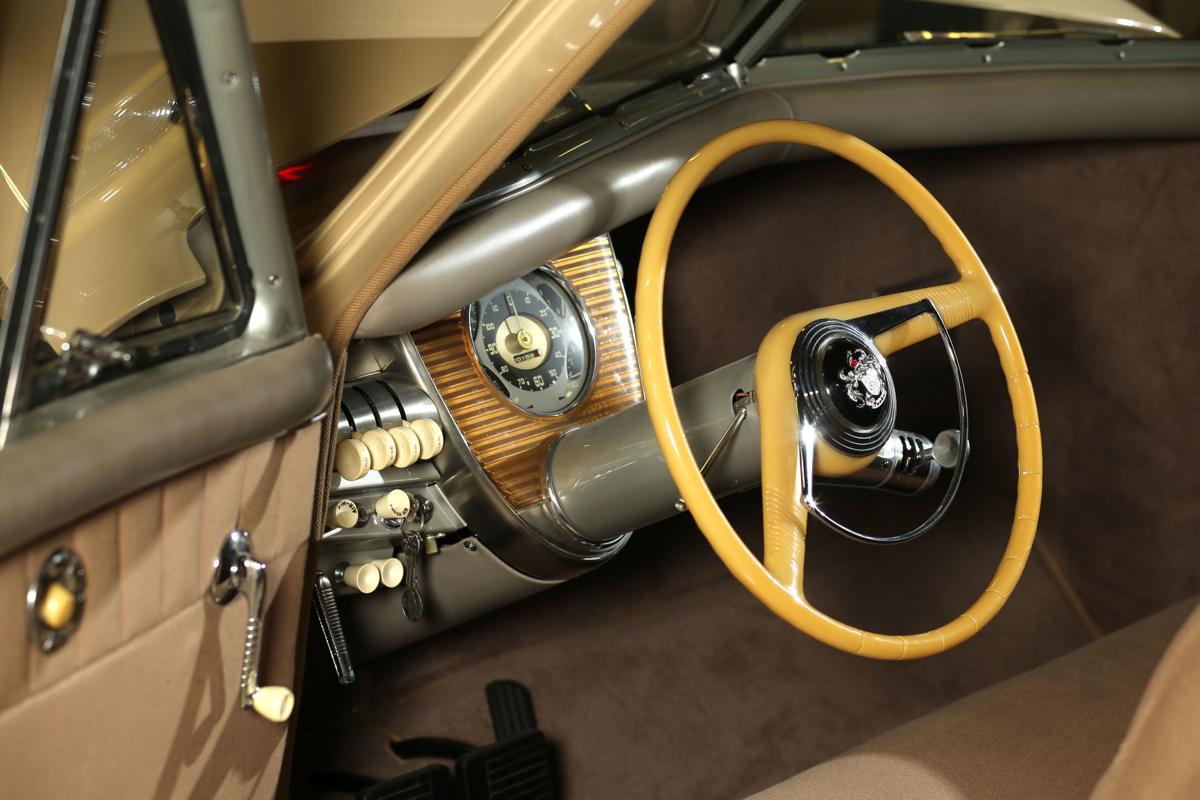 The interior of the 1948 Tucker on display. 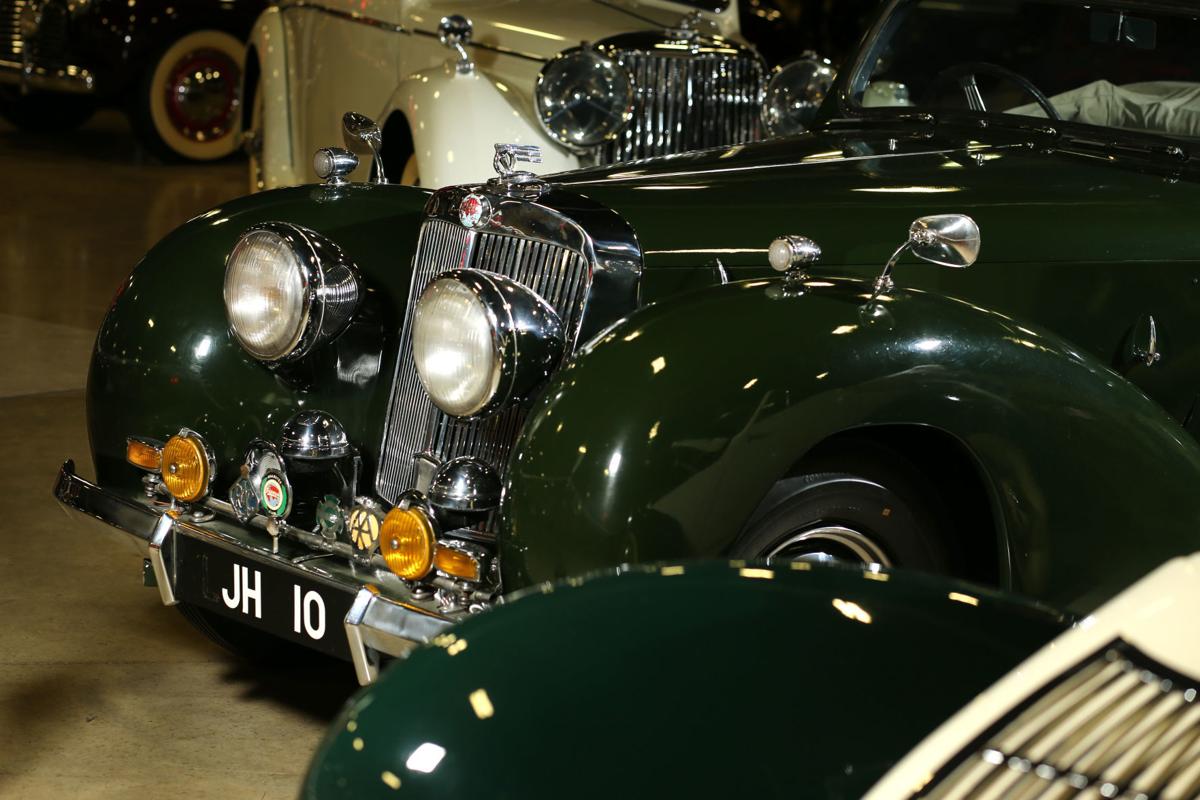 The 1949 Triumph 2000 on display at the Tupelo Automobile Museum. 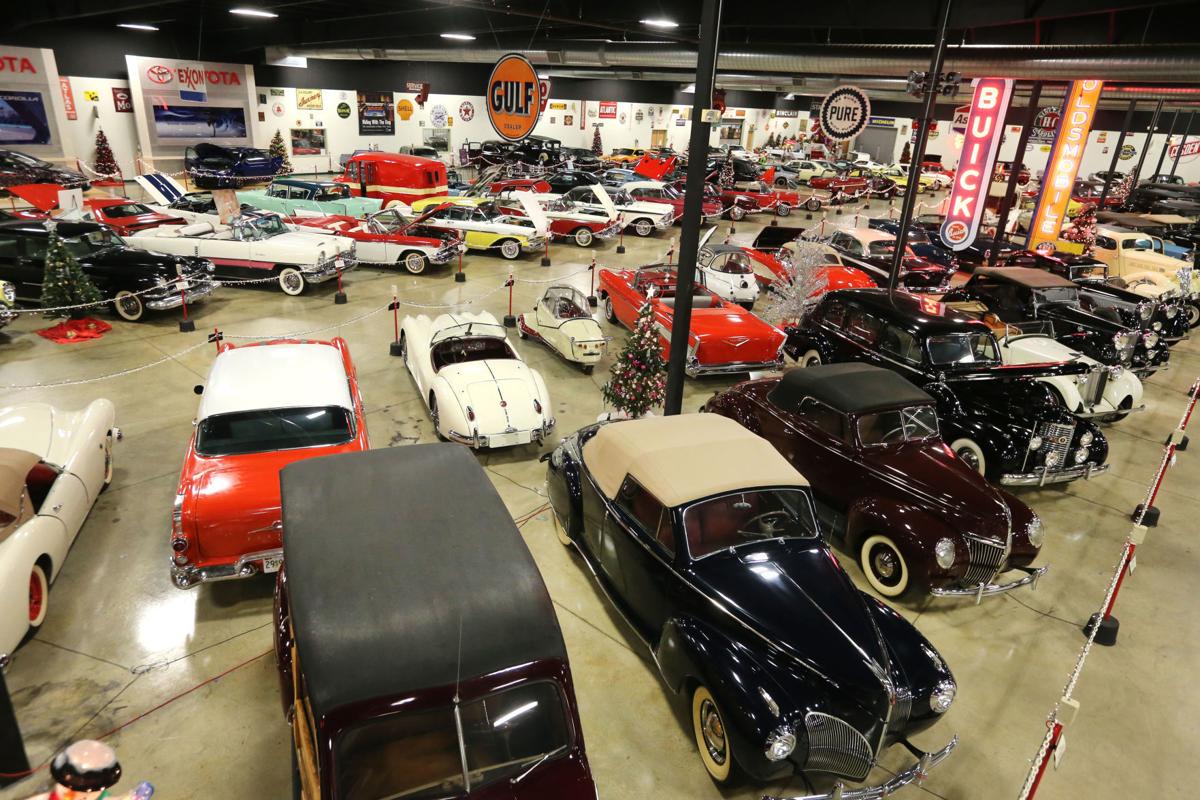 Cars sit on display at the Tupelo Automobile Museum.

TUPELO • Jane Spain’s favorite car in the Tupelo Automobile Museum is a 1954 Mercury Sun Valley. Painted a pale yellow, its innovative and distinctive plexiglass panoramic roof allowed passengers to soak up the views.

And that’s what she and her late husband, Frank, did in the late 1990s, when they drove the car from Alaska back to Tupelo. The memories of that trip – even when the car broke down in the Yukon, where they had to wait a few days for parts – are indelibly etched in her mind.

“It was an awesome adventure,” she said with a smile.

But the Sun Valley, along with the other 177 vehicles in the museum, will be sold at auction in late April, never to be gathered under one roof again.

Spain made the bittersweet decision to sell the cars because, after 16 years, it was no longer sustainable to run the museum. Most importantly, she said it was time to do what the construction of the museum was meant to do – fund a charitable educational foundation Frank had envisioned.

Proceeds from the sale of the collection – whose value ranges from nearly $10 million to perhaps twice as much or even more – will go to the foundation.

“Every nickel will go toward it,” Jane said. “I’m not keeping any of it.”

Nor is she keeping any of the cars, despite the many memories and stories that so many of them hold. Not even the beloved Sun Valley.

“I have plenty of memories, but you know, if I clung to every memory, I’d keep so many of them and then I’d feel guilty if I didn’t keep this one or that one,” she said. “So my thing is it needs to make more memories – all of them do.”

The cars will all find new homes. Some will go to collectors, some will likely go to museums in Europe and elsewhere. But Spain hopes that some of them, like the Sun Valley, will be driven again.

“They have sat here, and we took very good care of them, but they need to be out on the road, and they need to start new experiences,” she said. “Most will hopefully go somewhere where somebody will make new memories with them.”

The Tupelo Automobile Museum opened on Dec. 7, 2002, and in the spring of 2003, it was officially designated the State of Mississippi automobile museum.

Establishing the museum was a 28-year process, beginning when Frank Spain bought his first antique car in 1974. Spain, the television pioneer who started WTVA and who helped develop color technology and other innovations, scoured North America and Europe to find cars for his growing collection. He and then museum curator, Max Berryhill, drove most of them to Tupelo, sometimes breaking down or running out of gas.

Until the late 1990s, the vehicles were stored at locations scattered across the U.S. Spain and Berryhill wanted to build a museum so the public could enjoy and learn from the collection.

The cars are displayed in chronological order, each marked with a sign giving more information about each.

Stephen Mancuso, the director of collections at the museum, has been documenting the cars, organizing the files and matching the paperwork for each one as the auction draws nearer.

“We have 178 cars owned by the museum, and 233 cars in the museum on display, some of which are on loan,” he said. “My job is to make sure we have paperwork on everything we have, to document it and transferring titles to the museum since some of that was never done.”

And the car collection is indeed impressive. With vehicles from every decade, it includes many rare vehicles, including some that are among only a handful remaining in the world.

Spain found several cars scouring newspaper and magazine classified ads. For example, the 1936 Lagonda and 1937 Alvis were bought in England after he saw ads for them in the back of a magazine.

“He was always hunting,” Mancuso said. “He had a phenomenal eye for them. And the more professionals I bring in here that really understand the level of cars we’re dealing with are blown away. For example, we have a Winton here that is the only one that exists in that year. It’s all original and was a rare production even for that year.”

The museum also has a Tucker, which was introduced in 1948. Only 51 were made. A movie in 1988 produced by Francis Ford Coppola, “Tucker: The Man and his Dream,” told the story of Preston Tucker and his innovative automobile and how forces shut down the company before it could sell any of the cars. Coppola himself is one of the few who own a Tucker.

Spain in the 1990s bought what Mancuso calls a unique Tucker with its Cord transmission and an exterior color (beige) of which only five were painted that way.

“It was used at the Indianapolis Speed Trials and went around the race track,” he said. “We have the promotional video that Tucker shot with our vehicle in it, which is pretty special. And the car is fully functional. It just needs a new battery and a light tuneup.”

Mancuso said the Tucker, along with the rest of the collection, has the interest of car collectors and enthusiasts around the world, including some well-known celebrities.

The model at the museum is officially designated Tucker No. 1028, and when it goes up for auction, it will be a rare occurrence. How much it will sell for is unknown, but it should be quite a lot.

“Phones are ringing now, and word is trickling out,” he said. “This has been a tight, well-kept secret for a while as we were going through the process of locking down all the details.”

The auction will be April 25-27, through a partnership with Bonhams Auctioneers and consultant Wayne Carini of Velocity Channel’s “Chasing Classic Cars.” Carini has been to Tupelo to review the collection, and he’ll be returning again next month. And he’s not the only master car restorer and enthusiast who knows about the Tupelo Automobile Museum.

Mancuso said the museum is well known as a collection among those who are really knowledgeable about the cars, but to the general public, it’s viewed as just a bunch of old, if interesting, cars. They often don’t have an understanding or appreciation for what’s inside.

But once they visit, their minds often change.

“It’s pretty typical to see people walk through the doors and just stop because they can’t believe what they see,” he said.

And for a few more weeks, the museum will stay open to the public. It won't close until late March or early April, when it will close its doors in preparation for the auction. Until then, visitors are welcome Monday-Saturday from 9 a.m. to 4:30 p.m. and Sunday noon to 4:30 p.m., with the exception of Christmas and New Year's Day.

“It’s going to really send a ripple effect through the auto collection community.”

The Tupelo Automobile Museum is owned by a non-profit, educational foundation that Frank Spain created. The intent was to keep the collection of cars preserved for future generations, and the original plan for the foundation was to develop educational scholarships and a curriculum for school children.

Despite the museum being the top-rated destination in Mississippi via TripAdvisor and receiving numerous accolades over the years, it has never had the numbers of visitors it needed to be self-supporting.

After Frank Spain’s death in 2006, there was a plan to boost attendance through various means, but that still didn’t bring in the numbers. The financial stability of the museum was and never has been in doubt, however. Jane Spain sold a 1,200-acre lot her husband had bought in Southern California to a wilderness protection group, and the proceeds from the sale helped protect the museum “forever,” she said in 2006.

But now at age 66, Jane Spain said operation of the museum with herself and a handful of volunteers is no longer feasible or sustainable.

“The purpose of all of this was to preserve the cars and to provide grants for educational purposes, not necessarily individuals, but for innovative projects and would teach many kids,” she said. “We were never really able to do that. For two years now we’ve been looking for a way to keep the collection together, but I haven’t been able to do it. So I’ve come to terms with letting the collection go. Every nickel that has come into this building has gone toward operations, but now every nickel will go into into an educational fund. It’s all going to a continuing purpose, and I’m excited about that.”

And it’s Mancuso’s task to get everything in order for that auction so that every car can get top dollar.

“Preparing for something like this is a large undertaking no matter what,” he said. “It doesn’t matter if you have one car or 178, and with 178 it’s a huge task, and we’ve got a lot of work to do. It’s a long process.”

Spain said it is bittersweet to let go of the collection, but it is a decision that will benefit so many other people in the future as Frank had planned

Frank never sought or wanted recognition, but with the funding of the educational foundation via the auction, his legacy will continue, which Jane said was important for her.

“I always say I wish he collected stamps because it would have been much easier, but it wouldn’t have been as much fun,” she said with a laugh.

DENNIS SEID: We don't know how much we'll miss it until it's gone

Sometime next spring, the collection of cars at 1 Otis Boulevard in Tupelo will be scattered across the globe, never to be seen together again…

Some of the cars in the collection

Among the 178 cars at the museum are these collectibles and classics:

• 1886 Benz - a three-wheeled car powered by petrol and looking more like a buggy than a sedan.

• 1908 Glyde – The first in the industry to provide an independent mounting of the powerplant from the body for the purpose of isolating engine vibration from the seat for carrying passengers..

• 1918 Stanley Steamer – a steam-powered automobile that showed ingenuity, if not a love for danger.

• 1948 Tucker – Ome of only 51 cars like this ever built and made famous by the movie "Tucker: The Man and His Dream," starring Jeff Bridges as the car's creator, Preston Tucker.

• 1957 Corvette – The Corvette was introduced in 1953 and has been in continuous production ever since. With ram-jet fuel injection this model produces 283 horsepower from its 283 cubic inch engine.

• 1983 Camarovette – half Camero, half Corvette, artfully painted and featuring a nitrous-oxide-injection booster for maximum speeds.