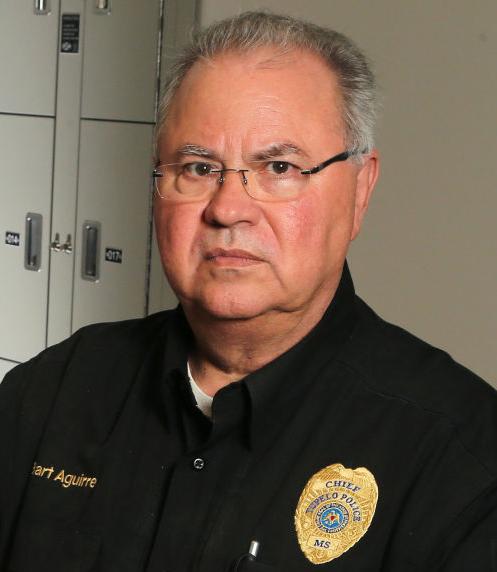 ABERDEEN – Tupelo police Chief Bart Aguirre spent most of the afternoon on the witness stand Tuesday during a wrongful termination trial in federal court. He will continue his testimony Wednesday morning.

Former officer Jennifer Baker says she was the victim of retaliation when she was unjustly fired in March of 2017.

Aguirre said Baker made improper traffic stops, lied to the public and gave more tickets to blacks than whites. He added that the decision to fire her was made with the full knowledge of City Hall and Mayor Jason Shelton.

The chief said complaints from the public and other officers led officials to conduct an internal investigation that looked at the dash camera video from all of Baker’s stops.

“We looked to see if she was targeting the elderly or African Americans,” Aguirre said. “We only came up with five (questionable stops) within a couple of months period. Our system only stores about 60 days. Any others might have rolled off or were not recorded.”

In his opening statement, Baker's attorney Jim Waide downplayed the importance of the videos which were hand-picked by Capt. Tim Bell, who as the patrol division commander was Baker's supervisor.

"They singled out about six cases that she had made and turned those over to Internal Affairs," Waide said. "They met with her on March 2, 2017, and told her she was suspended. About five days later, they gave her three reasons why they were firing her."

One of those reasons was Baker telling a motorist she was under pressure to write more tickets.

"I only ask them to be more productive and active in their patrols."

His comments were countered by two former officers. In 2015, then-officer Keith Bowdry wrote a letter to the Tupelo Human Resources department asking for a hearing to discuss the department's quota of writing 30 tickets a month.

Former officer James Andrews testified Tuesday that the department looked at numbers and the saying "Two tickets a day keeps the captain away," was well known among officers.

In an internal email about Andrews' possible promotion, Capt. Bell wrote "It's hard to fight for him. He worked 14 days last month and turned in 7 tickets."

Aguirre had been on the stand for more than two hours when U.S District Court Chief Judge Sharion Aycock decided to end the first day of the trial.

"We still lack a good bit of testimony," Aycock said. "I feel it would be best if we come back in the morning and expect to hear a full day of testimony."

Other witnesses expected to be called to the stand this week include Capt. Bell and Deputy Chief Allan Gilbert.

The judge expects the trial to last “possibly five days,” which would carry it through next Monday. The case will be decided by an eight-person jury, made up of six women and two men. There are six white and two black jurors.

Videos of traffic stops led to firing of Tupelo officer