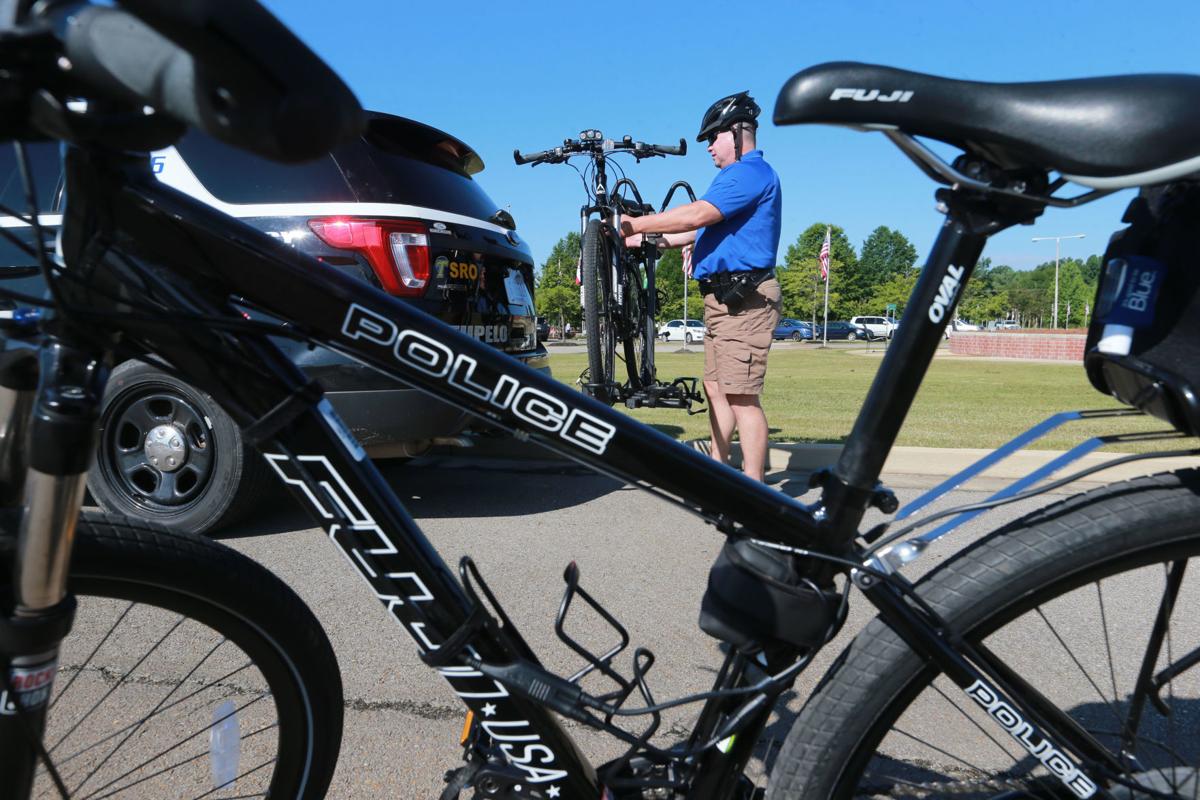 Cpl. Alan Chavers begins unloading his bike from the rack as he and three other officers start their daily bike patrol as part of the Tupelo Police Department’s ‘Operation Safe Summer.’ 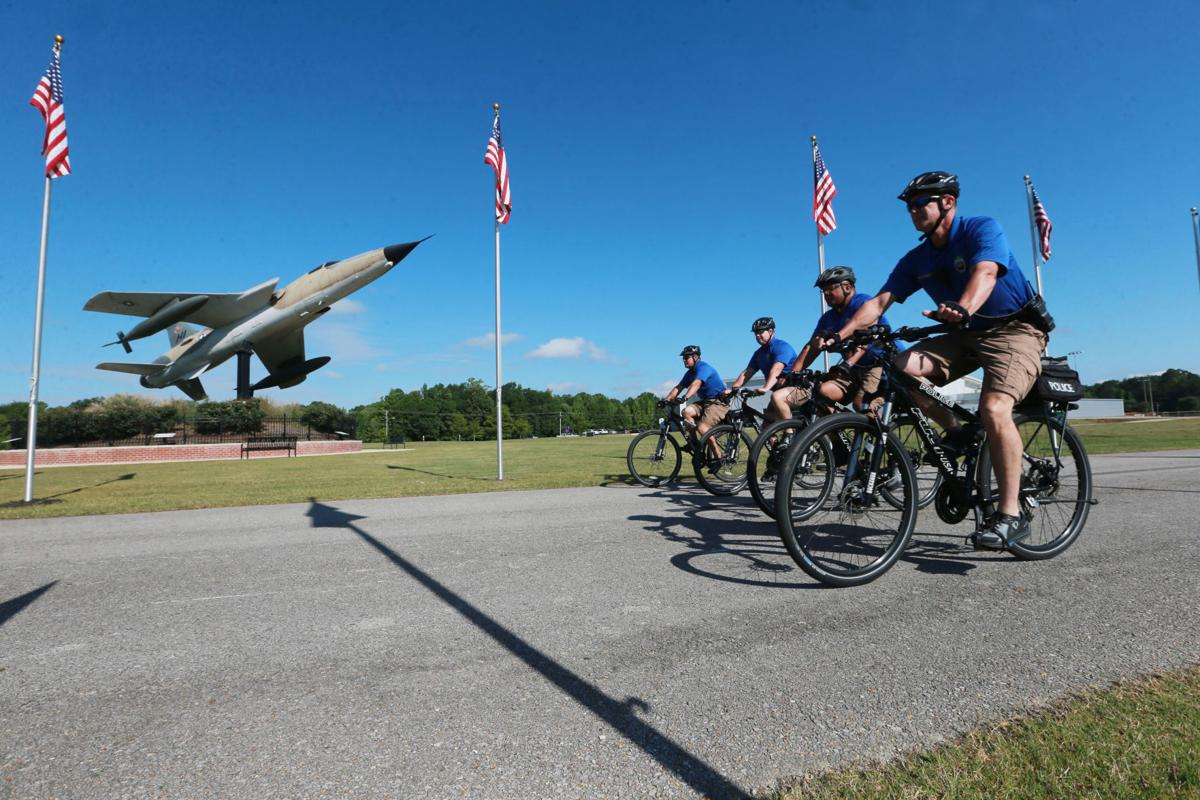 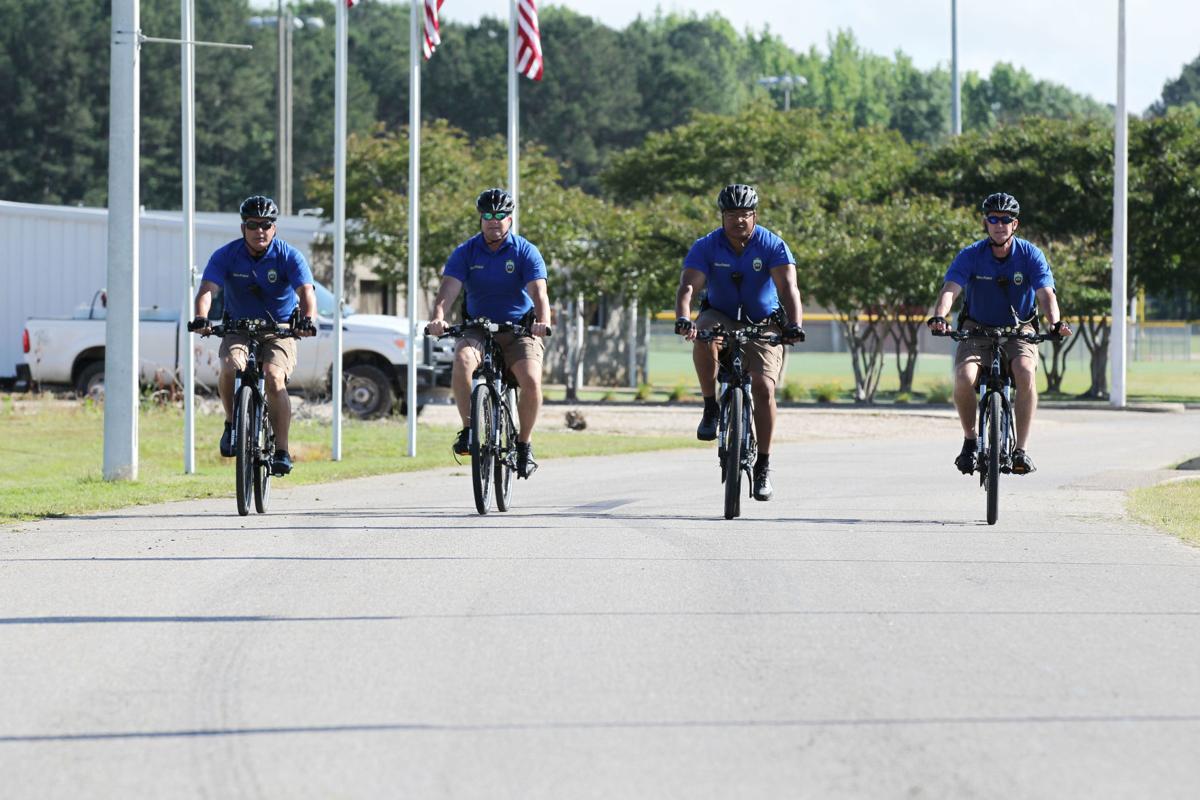 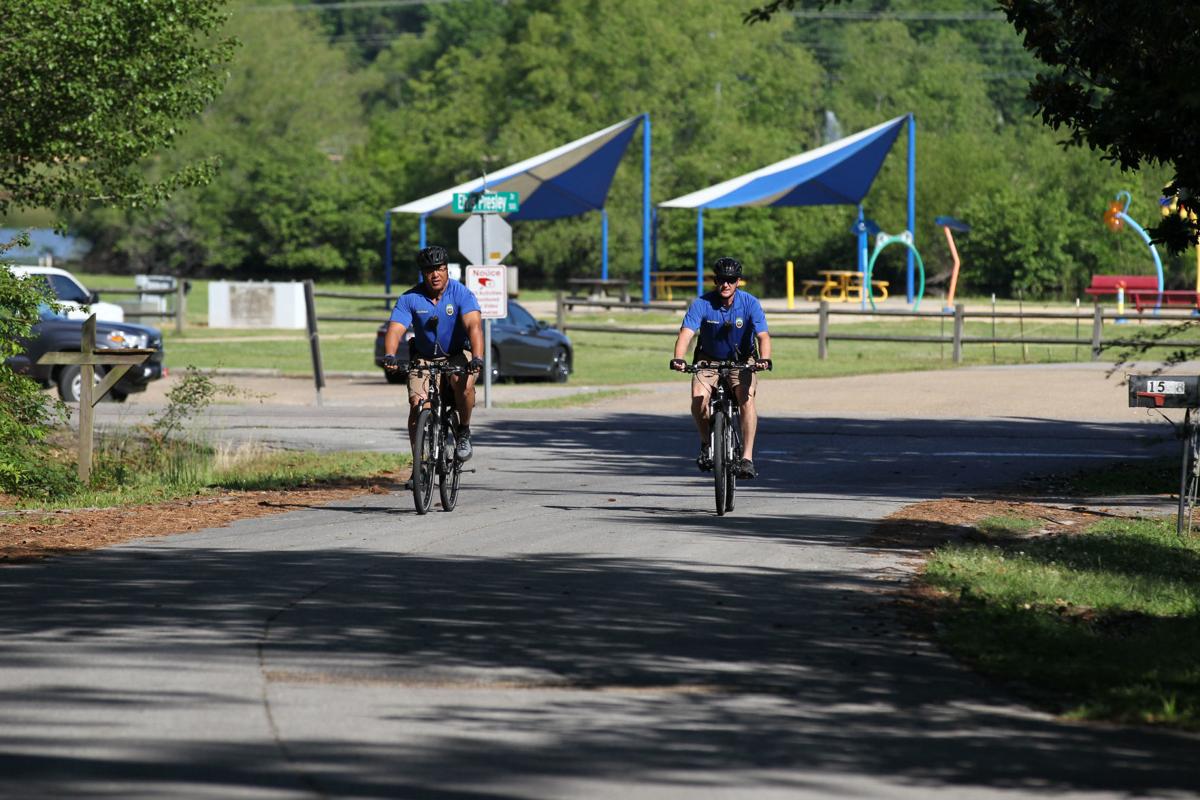 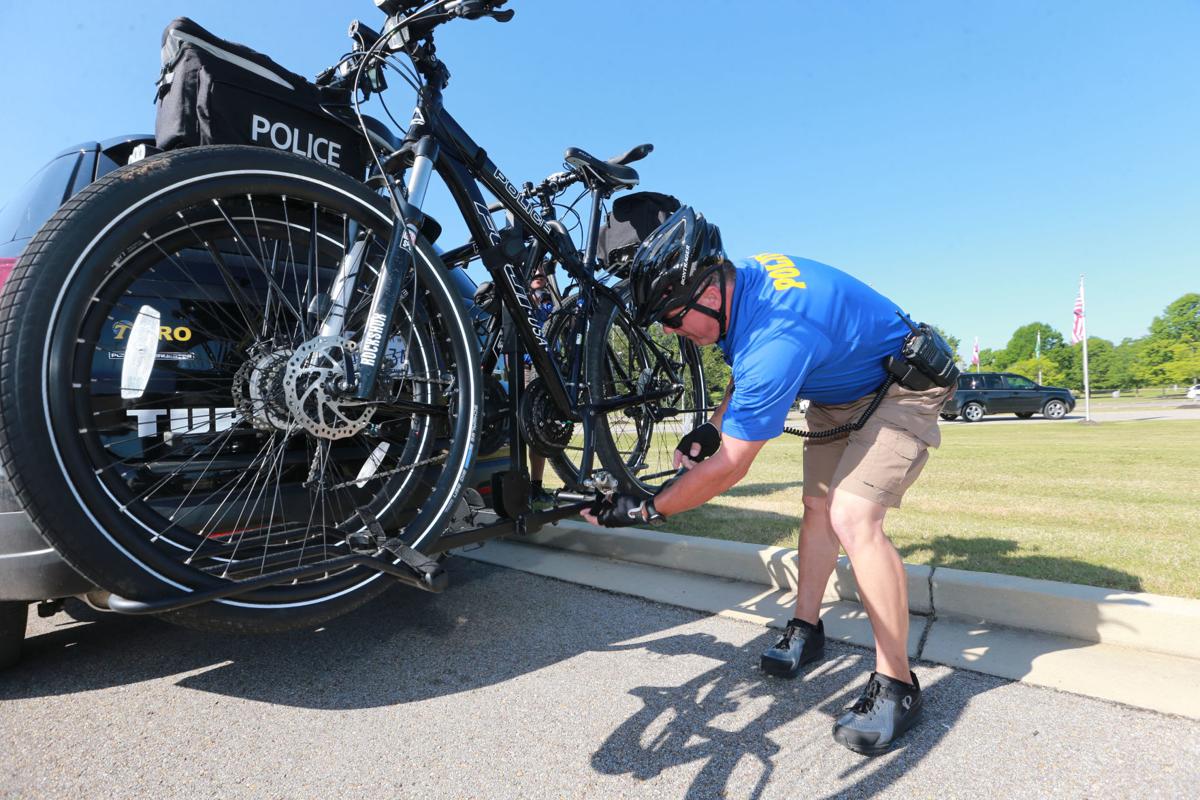 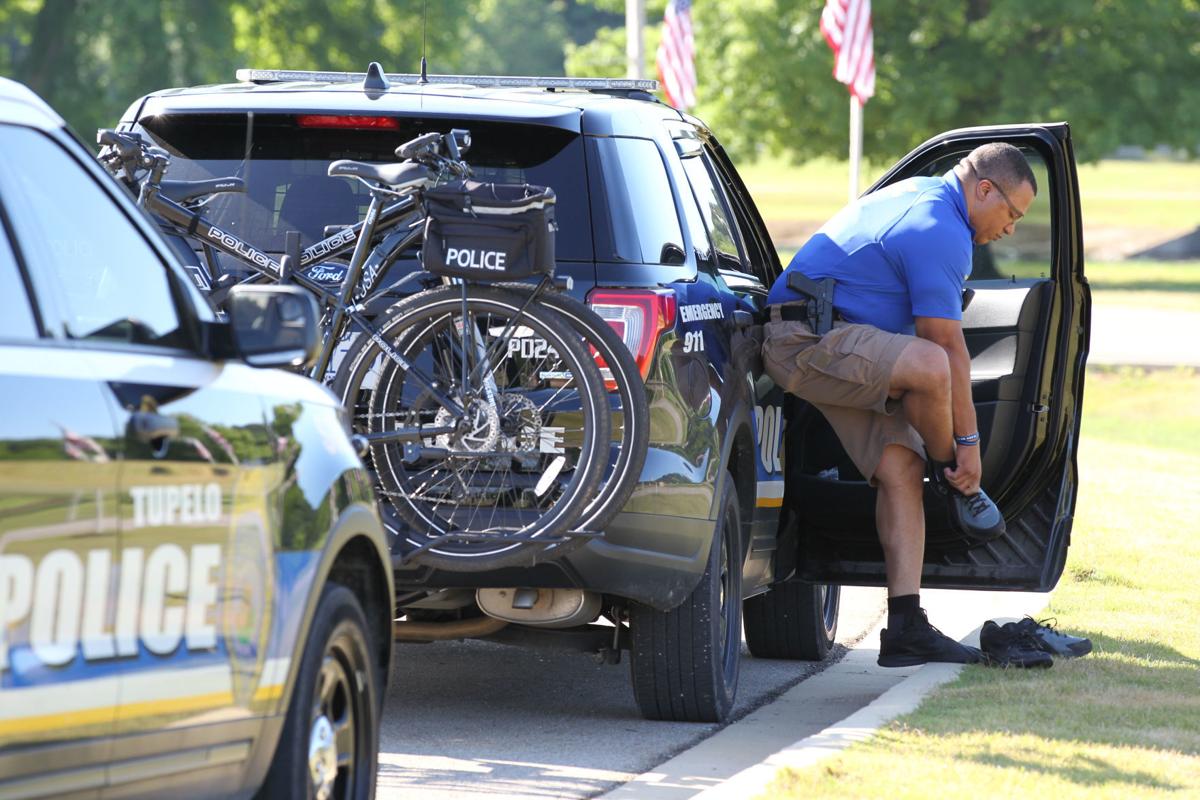 Tupelo police officer Tremaine Frison changes into his bike shoes before he joins three other officers to begin their neighborhood bike patrol as part of 'Operation Safe Summer.'

Cpl. Alan Chavers begins unloading his bike from the rack as he and three other officers start their daily bike patrol as part of the Tupelo Police Department’s ‘Operation Safe Summer.’

Tupelo police officer Tremaine Frison changes into his bike shoes before he joins three other officers to begin their neighborhood bike patrol as part of 'Operation Safe Summer.'

TUPELO • People should plan on seeing more officers all over Tupelo as the temperatures continue to climb.

In addition to patrolling in cars and SUVs, police will be out on bicycles, golf-carts, Segways and even on foot. For nearly two decades, the department has been more flexible in the way it patrols neighborhoods and events during the summer months, when criminal activity normally increases.

“Longer days, hotter weather and fewer structured youth activities typically lead to an increase in crime across the country,” said Tupelo Police Department spokesman Capt. Chuck McDougald. “Sometimes, youth lose the structure of school during the summer, have more time on their hands and kind of drift off and get into trouble.”

Operation Safe Summer is designed to give the department more flexibility. They will need all the flexibility they can get since the COVID-19 pandemic has disrupted the country’s routine. The department can’t offer its normal youth camps this summer because large gatherings are discouraged. This will be the first summer since 2000 that TPD has not held its Junior Police Academy.

The normal activities at the Police Athletic League building have also been scrapped for the time being.

“We hope to create a PAL Mobile, where we can give notice on Facebook, go to a park and meet up with a smaller group of kids for activities and interaction, both athletic and academic,” McDougald said. “We are still trying to work out the details but a key component of Operation Safe Summer is the officers interacting with the youth.”

While the pandemic did create new problems, it also freed up the school resource officers almost two months early when in-school classes were halted in mid-March. The SROs had more time to prepare for their activities with Operation Safe Summer. That includes getting themselves in shape to ride bicycles all day.

“We started off slow, doing a couple of miles a day and have worked up to 15 miles a day,” said Cpl. Alan Chavers. “In the last two weeks, we have done more than 100 miles on the bikes.”

The bike patrol uses the city’s bike paths and bike lanes whenever possible and they expect to pedal more than 750 miles before the summer is over.

“We are also using golf carts and Segways,” said TPD support services director Capt. Terry Sanford. “We are trying to hit two neighborhoods a day and are getting a good, positive response from the citizens.

“We’ll alter our schedules according to community requests.”

They used that flexibility recently when one neighborhood reported a rash of burglaries. The bikes, golf carts and patrol cruisers saturated that neighborhood for several days.

“The whole Operation Safe Summer has the ability to move folks around where they are needed according to crime stats or community requests,” McDougald said. “Bike patrol works in conjunction with patrol, the Street Crimes Unit and K-9s – it’s all about teamwork.

For the time being, Operation Safe Summer is focusing on neighborhoods, business districts, parks and creating events to interact with children. The department will also be enforcing the city’s juvenile curfew, which is actually in effect all year, not just during the summer.

Anyone under the age of 18 is supposed to be off the street by 11 p.m. Sunday through Thursday. On Fridays and Saturdays, they can be out until midnight.

“The curfew is a way to rein in some of that activity before it gets out of hand,” McDougald said.

Because the statewide pandemic guidelines discourage outdoor gatherings of more than 20, the status of the normal festivals, parades and other large community events is up in the air at the moment. If those do return, TPD has enough flexibility to easily switch gears.

Analyst: You can sue the goverment, but chance of success is slim

CNN commentator: Trump's behavior is the antithesis of patriotism