Telesha Brim, left, lights the candle of a supporter who attended Monday’s candlelight vigil for her sister, Tiara Dancer, who was shot Jan. 28 in Haven Acres while watching a fight. 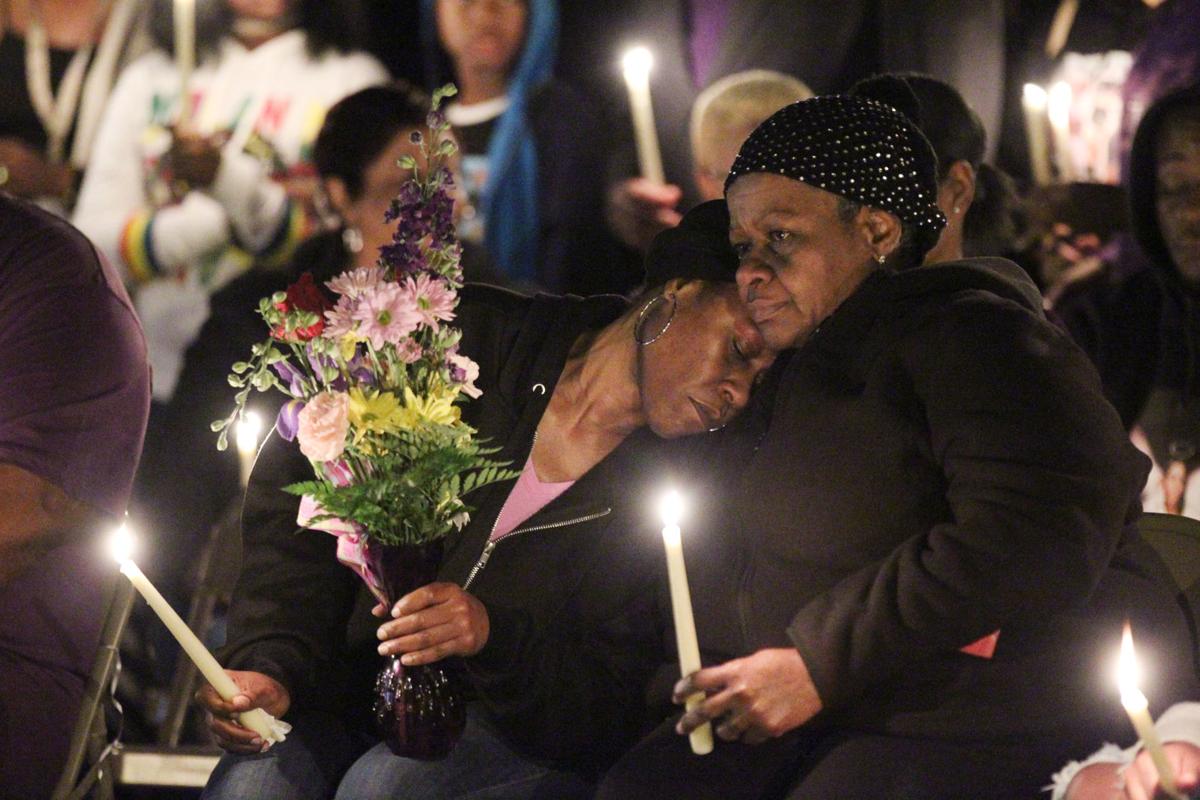 Christel Dancer, left, leans on a family member Monday night as friends, family and other supporters gather at Gum Tree Park to hold a candlelight vigil for her daughter, Tiara, who was killed Jan. 28 by a stray bullet while watching a street fight in Haven Acres. 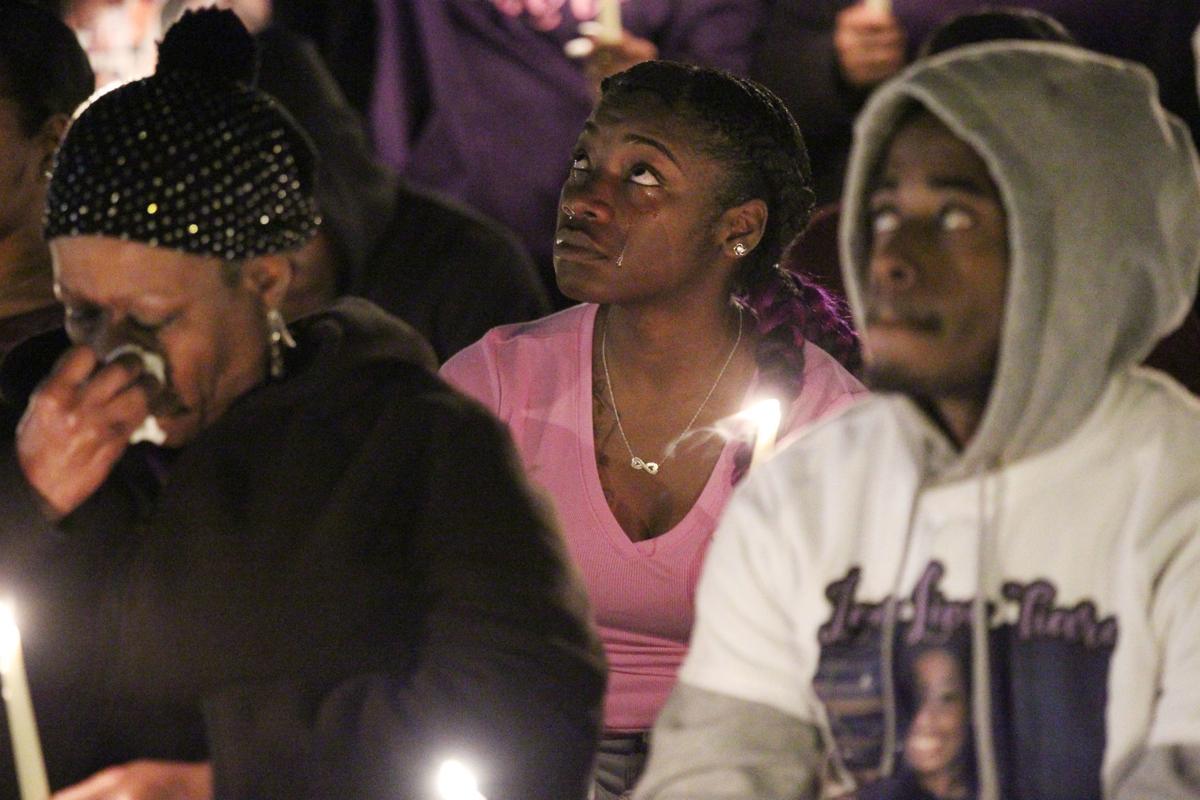 A family member looks to the heavens as they release balloons Monday night during a candlelight vigil for Tiara Dancer, 17, who was killed by a stray bullet as she watched an altercation in Haven Acres on Jan. 28.

Telesha Brim, left, lights the candle of a supporter who attended Monday’s candlelight vigil for her sister, Tiara Dancer, who was shot Jan. 28 in Haven Acres while watching a fight.

Christel Dancer, left, leans on a family member Monday night as friends, family and other supporters gather at Gum Tree Park to hold a candlelight vigil for her daughter, Tiara, who was killed Jan. 28 by a stray bullet while watching a street fight in Haven Acres.

A family member looks to the heavens as they release balloons Monday night during a candlelight vigil for Tiara Dancer, 17, who was killed by a stray bullet as she watched an altercation in Haven Acres on Jan. 28.

TUPELO • With nine homicides in less than 11 months, the Tupelo Police Department is stepping up its efforts to reduce gun violence in the city of 38,000.

Last week, the department announced it would increase patrols, stage more safety checkpoints and make a concerted effort to confiscate illegal guns, especially those in the hands of youth.

The moves come in the wake of a 17-year-old Tupelo High School student being gunned down following a Jan. 28 street fight in the Haven Acres neighborhood. Tiara Dancer was an innocent bystander hit by an errant bullet.

Since 2004, there have been 35 homicides committed within the Tupelo city limits. Almost half have been within the last three years. Of the 17 homicides since April 2017, only three were not the result of gun violence.

During the same time span, there were at least 20 incidents where shots were fired and police were called but no one died. In most of the cases, the shooter knew the person or persons they were shooting at. Some of the instances were domestic violence. Others were the result of ongoing disputes.

Getting guns off the street

One way to reduce gun violence is to reduce the number of guns. To take a gun away from someone, police have to prove it was stolen, used in a crime or illegal to possess. Most of the guns on the streets are stolen from unlocked vehicles and houses.

Police Chief Bart Aguirre said his officers will increase both safety checkpoints and searches of individuals to get guns off the streets. That approach has worked in the past. During the first six months of 2017, TPD seized more than 200 guns, including a loaded full automatic machine pistol.

“Our goal is to get guns off the street,” Aguirre said. “There are so many guns on the street and many of them are in the hands of youth. There is no reason for kids 15, 16 or 17 to carry guns to school or to carry them in a peaceful community.”

In fact, state law prohibits anyone under the age of 18 to possess a handgun, whether it is loaded or not. It is a misdemeanor, punishable by up to a year in jail and/or up to a $1,000 fine.

“Kids need to know. We are putting them on notice,” Aguirre said. “I am giving an order to come to the community. We will be stopping people and searching for guns. If that upsets you, then blame me.”

When police interact with individuals – whether youth or adults – in areas where there has been gun violence in the past, the officers will now pat them down for weapons.

“It is not police picking on black kids or profiling. It is a safety issue,” Aguirre said. “We know folks carry guns in their jackets or way down in their pants. It’s for officer safety and their safety. If we see a bulge, that gives us a reasonable suspicion and a right to search them for weapons.”

When police announced the efforts to reduce gun violence last week at the Haven Acres Neighborhood Association, the citizens backed the department. Several noted that if someone had called 911 when they saw the street fight, then Dancer may not have been killed.

Focusing on the entire city

Dancer’s death highlights the gun violence on the south end of the city but police will not single out any section or neighborhoods.

Since 2017, there have been five homicides clustered in a three-mile area on the south end that includes Haven Acres, Southern Heights, Green Tee Road and Barley Court.

But there have been twice as many homicides in an area about the same size in central Tupelo. There were 10 homicides not only among the apartments on Monument and Lumpkin but also in single family homes off Jackson Street and in the Bristow and Lee Acres neighborhoods.

Increased patrols and checkpoints will deter crime, but stopping or slowing gun violence is tougher. They are often crimes of passion and opportunity, often taking place behind closed doors.

Police have to wait until the crime happens. In most cases, authorities cannot be proactive.

“I wish there was a way (to prevent homicides),” Aguirre said. “It’s a societal problem. Parents are not raising our children the right way. Parents and churches have to teach kids the right and wrong ways to deal with things.”

Homicides on the rise

Over the last 25 years, the city of Tupelo has averaged about two homicides a year. In fact, in 20 of the years from 1996 through 2019, there were three or less. There has been a marked increase of late, with eight killings in 2017 and another seven in 2019. Just a month into 2020, there have already been two homicides.

Police can’t stop crime by themselves. They need the help of the community.

“We are all in this together. We need your help,” said Deputy Police Chief Anthony Hill.

Officials are asking for residents across the city to reclaim their neighborhood by reporting crimes and suspicious activities.

“Last week, Team Tupelo met with more than 20 neighborhood associations,” Tupelo chief operating officer Don Lewis said. “The common theme is you have to take ownership of your neighborhood. When a disturbance happens, the first call needs to be to 911.

“Don’t go to Facebook and make a post or call your neighbor and say that you heard gunshots. Call 911 first.”

The community can help to keep guns off the street by simply locking their doors. People also need to write down the serial numbers of their guns and report any weapons thefts. That helps police identify and seize stolen weapons.

Lewis said the city cannot conduct a buy back program to get handguns off the street, but they are working with different organizations and civic groups “to see what we can do.”

Lee County Justice Court Judge Tony Rogers challenged parents to step up and do the right thing to take guns out of the hands of children.

“The sad part is some of the parents know their kids have guns,” Rogers said. “And not only parents, the brothers and sisters know (their siblings have guns) but nobody is willing to come forward and talk about it.”

Ward 7 Tupelo City Councilman Willie Jennings watched Haven Acres kick out the crime element in the late 1990s. He is ready for that neighborhood and the city as a whole to take back the community.

“Officers can’t ride up and down the streets 24 hours a day,” Jennings said. “That phone on your hip can help.

“Let’s step up and be that nosey neighbor and make that call. No one has to know you made the call.”

TUPELO • The shooting death of a 17-year-old girl has prompted police and residents of a south Tupelo neighborhood to take action.