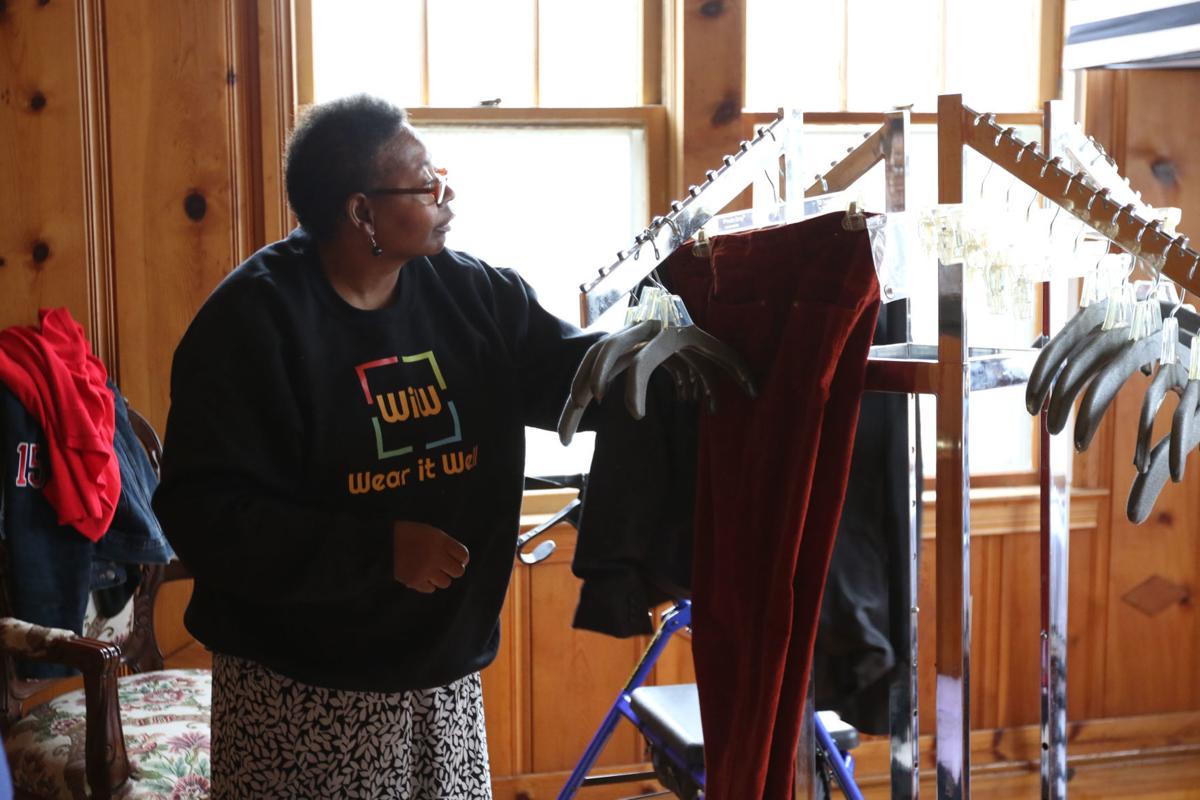 Debra Tuggers hangs items for the clothes closet at the new location for Wear It Well. 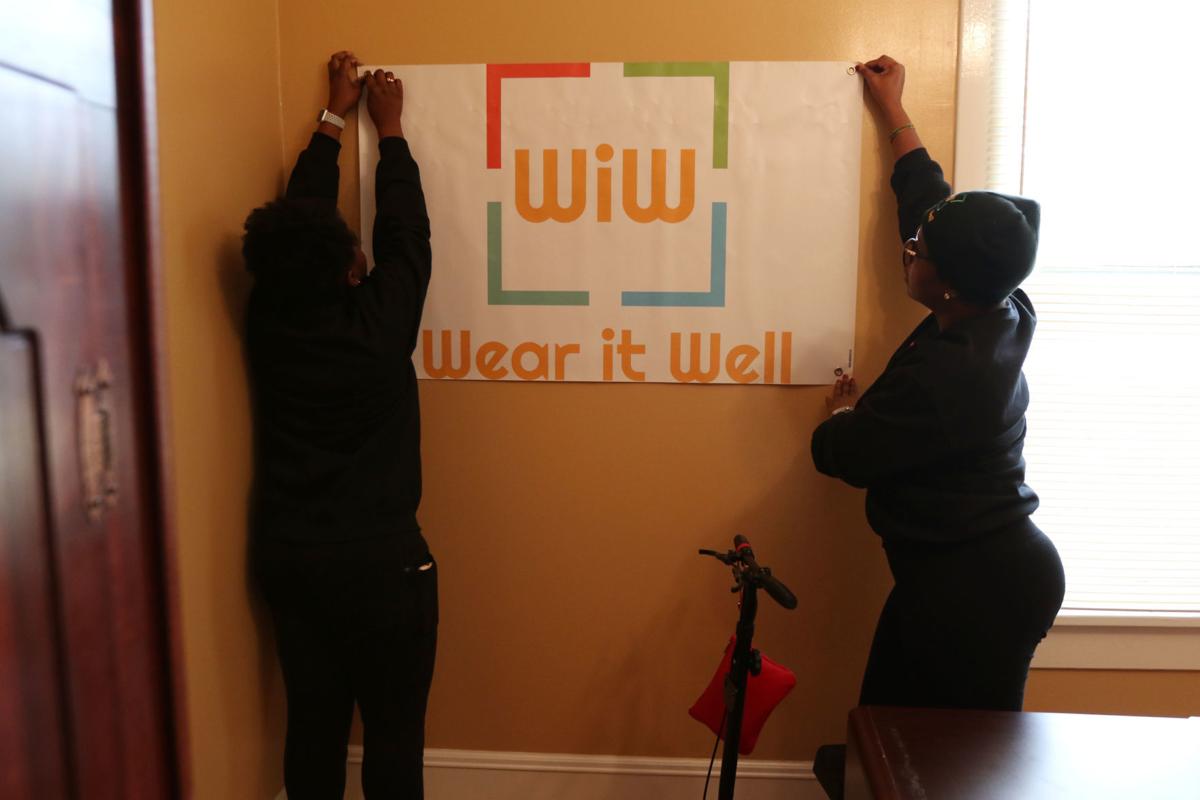 Lindsey Davis, left, and founder of Wear It Well, Katina Holland, hang a banner at the new location for Wear It Well in Tupelo. 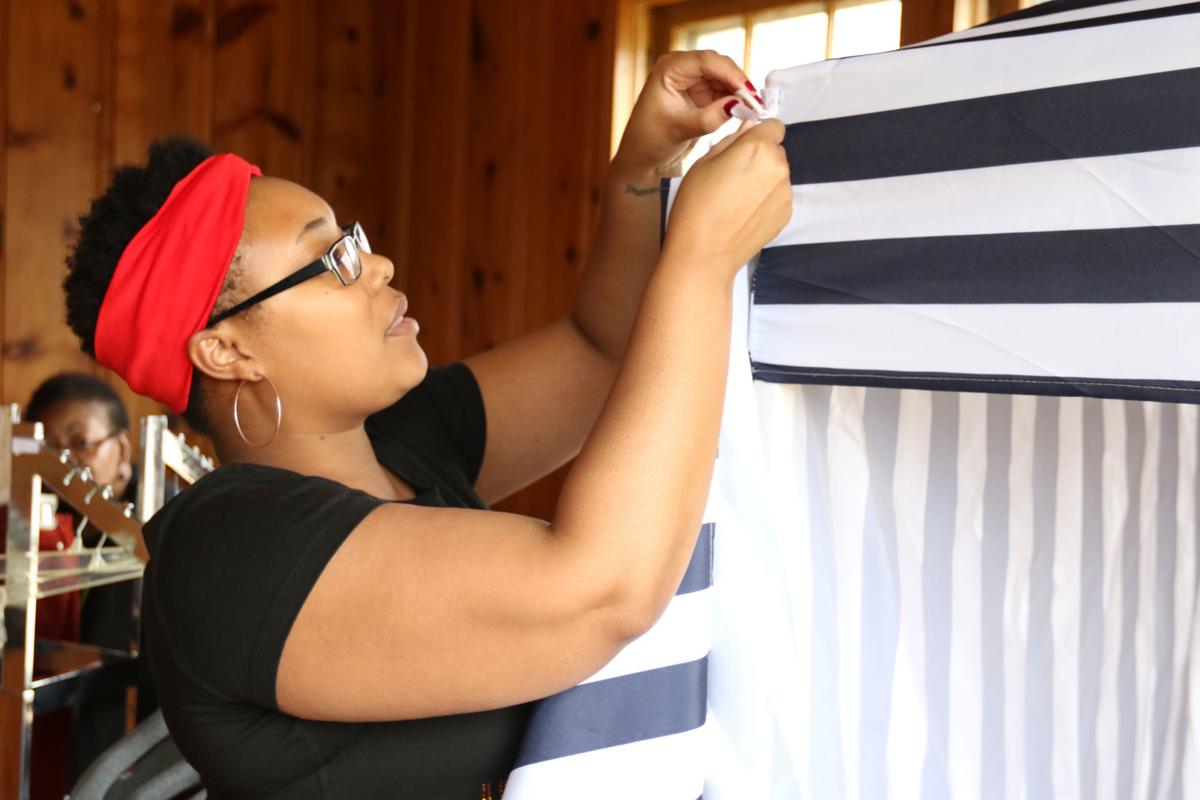 Leonna Mabry assembles the dressing room at the new location for Wear It Well. 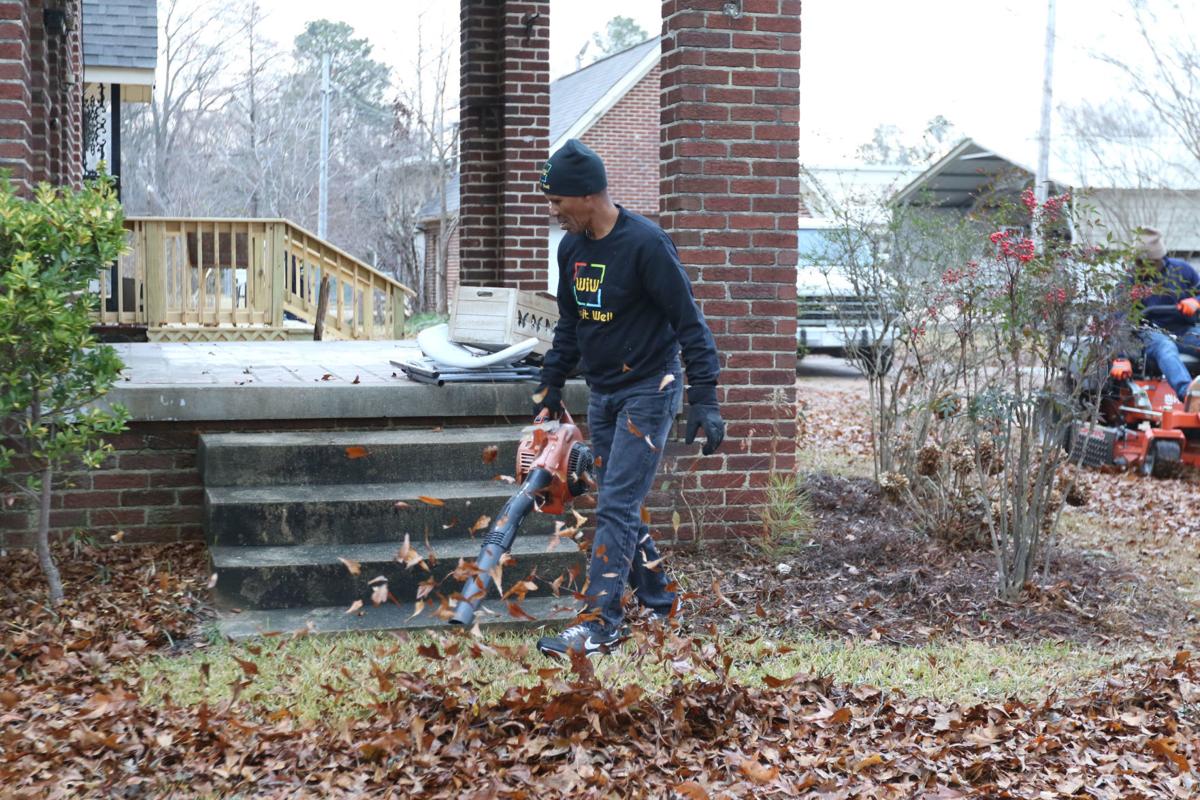 Johnnie Smith cleans up leaves at the new Tupelo location for Wear It Well, which was donated by Charles and Ruth Morris. 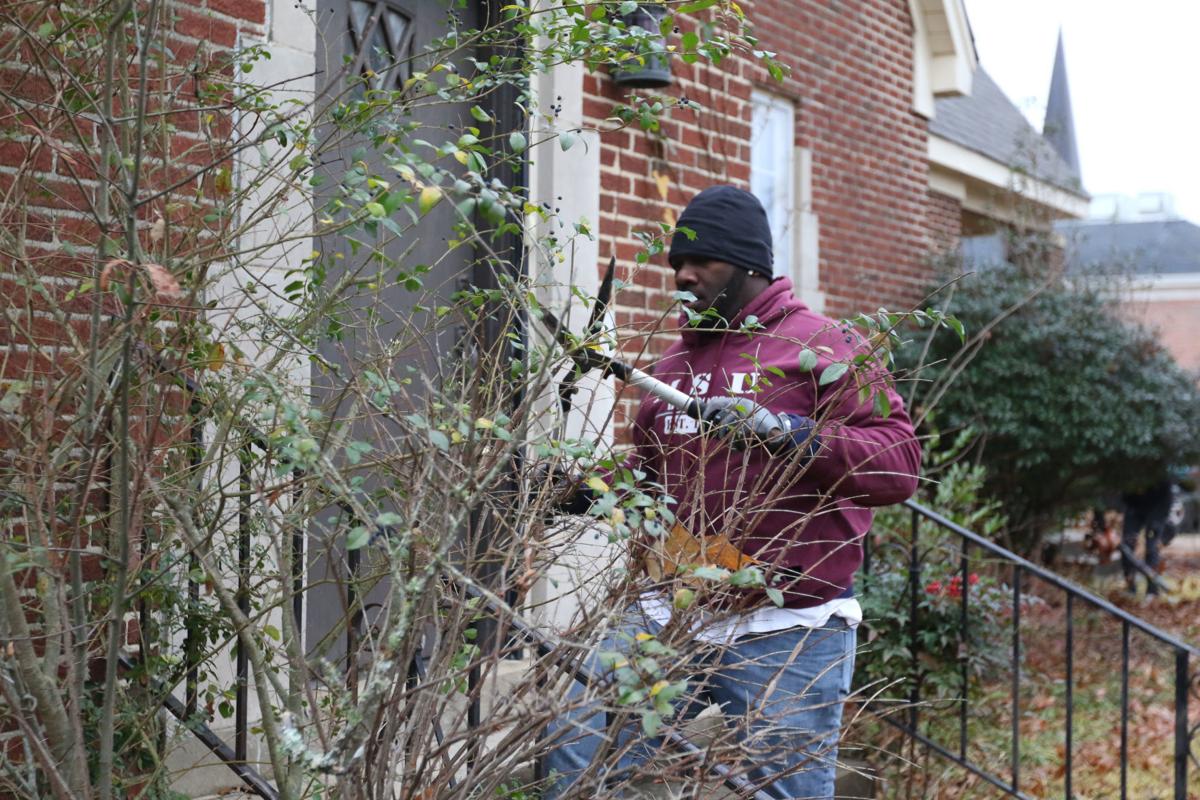 Jeremy Davis cuts branches at the new location of Wear it Well. 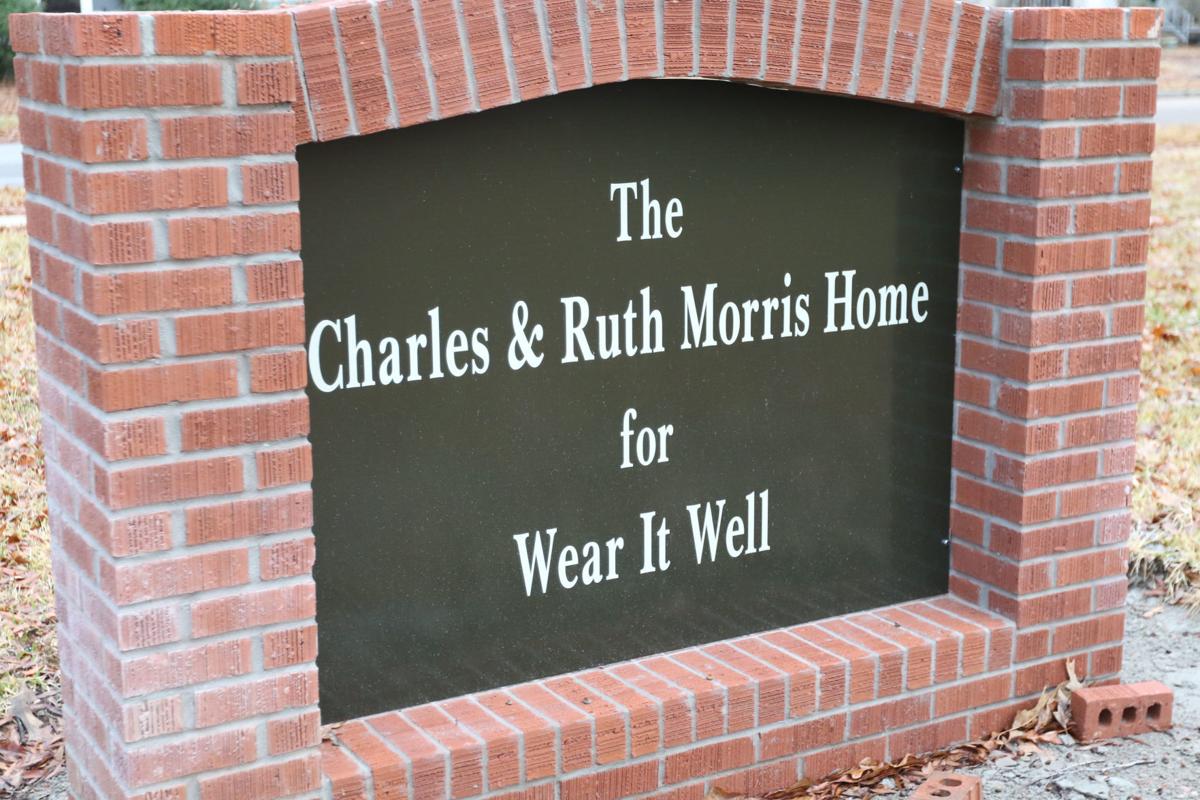 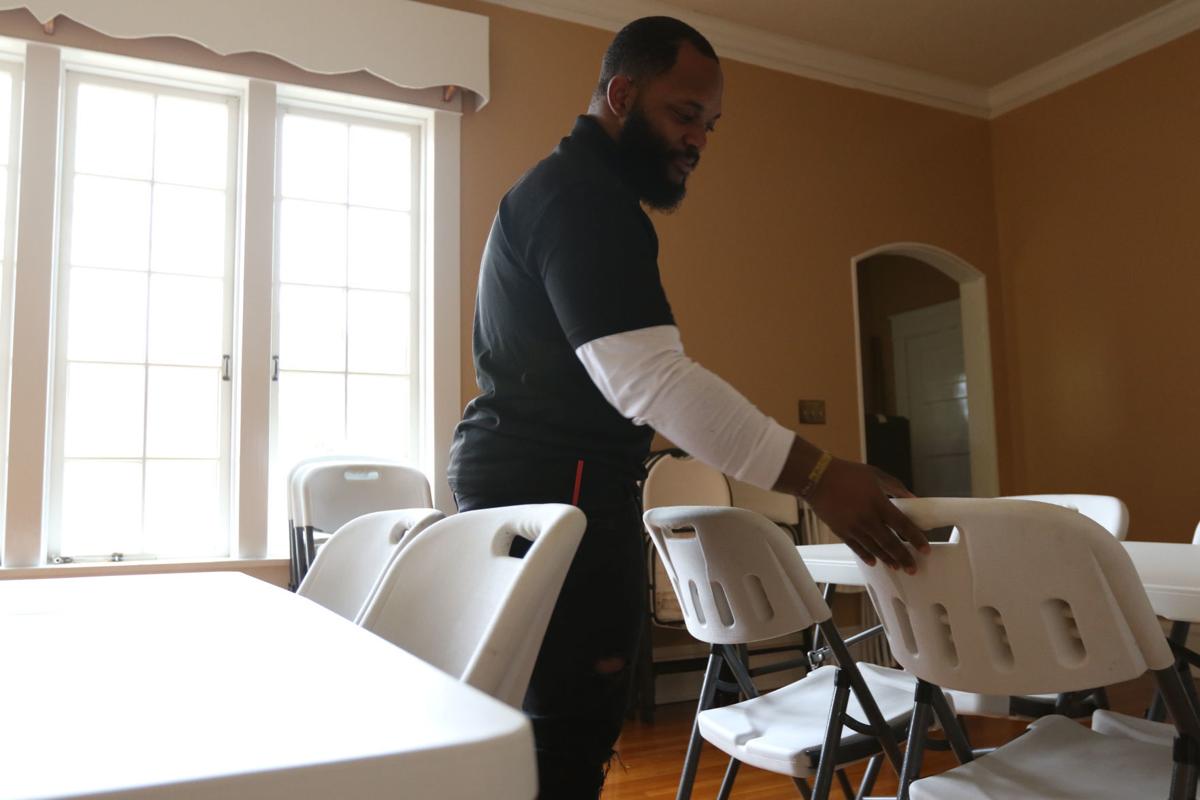 Devonte Senter sets chairs up for the Wear It Well after school program.

Debra Tuggers hangs items for the clothes closet at the new location for Wear It Well.

Lindsey Davis, left, and founder of Wear It Well, Katina Holland, hang a banner at the new location for Wear It Well in Tupelo.

Leonna Mabry assembles the dressing room at the new location for Wear It Well.

Johnnie Smith cleans up leaves at the new Tupelo location for Wear It Well, which was donated by Charles and Ruth Morris.

Jeremy Davis cuts branches at the new location of Wear it Well.

Devonte Senter sets chairs up for the Wear It Well after school program.

TUPELO • After being mobile for nearly two and a half years, Wear It Well will finally have a permanent home. The new Charles and Ruth Morris Home for Wear It Well at 826 W. Jefferson St. opened Wednesday, and an official grand opening will take place at 1 p.m. Friday, Jan. 10.

Wear It Well’s mission is to educate, motivate and inspire through a growing community reach. The organization began with makeovers for cancer survivors and has added programs such as Love The Skin You’re In, Health is Wealth and Ready, Set, GOALS.

Katina Holland, the founder of Wear It Well, said her own experience dealing with a traumatic brain injury nearly three years ago showed her firsthand what it was like to be without a job and need assistance and inspired her to begin her mission.

“As the founder, with this expansion, it really warms my heart. Most of all, I’m making my grandmother (Leona Givhan Davis) proud,” Holland said. “The whole concept of Wear It Well is in her memory and honor because of her selflessness and her raising me to be a servant and to have a heart to help others.”

The home is dedicated in memory of the late Charles and Ruth Morris. Pamela Morris, who currently resides in Florida, said the home belonged to her parents for over three decades.

Morris was inspired to dedicate the house to a cause after a previous renter moved out of town. Her husband, Larry Morris, previously created a home for girls in Atlanta named Jesse’s House after his father, and she said they both decided they wanted to leave a legacy in her parents’ honor.

“We wanted to create something in their memory that would last forever, so we’re real pleased,” Morris said.

Morris said her parents were originally from New Albany. When her father retired from the military, the Morrises moved to Tupelo, where the two were active in the community and First United Methodist Church. Her mother was a cancer survivor and former director of special services for Tupelo Public School District, while her father ran Tupelo Scrap Corporation prior to retirement. Morris said her parents always cared about the wellbeing of others and she wanted to continue that legacy for them.

It was through contact with CREATE that the Morrises found out about Holland’s need for a permanent home, and after researching her organization and speaking with her, they decided to give her use of the house as a place to house her charity. Morris hopes the home allows Holland to continue her work benefitting Tupelo and the community.

“She just touches so many people. That is the impact that we want, to touch as many people who need the services that she offers (as possible),” Morris said.

Holland said while they started mobile, she always wanted to have a physical location and was grateful when Larry and Pamela Morris reached out over the summer to offer use of their family home as their new location.

Holland received the space in October, and began renovations after a city evaluation. Volunteers have been painting, cleaning and redoing floors. Parking was added, and the building will be handicap accessible. There are set spaces for makeovers, and the location will feature classrooms and a boardroom. Holland also plans on adding a “repeat boutique,” which will be set up like a store and allow people to select clothing free of charge.

Since announcing they received a location, community response has been mind-blowing, said Holland. Several have donated money, items and their time.

Currently, the organization has 40 to 50 regular volunteers. Holland hopes to expand services by offering support groups and hosting events, seminars and women empowerment events. The main focus will be an after school enrichment and feeding program aimed at middle schoolers that will operate during the week. Holland also wants to create small groups for adults and children aimed at both the bullied and bullies. The space will provide a needed space if someone is in crisis, and Holland hopes donations to their drives will increase now that they have a set location.

“It will really, really open up for us to serve a lot more people,” Holland said.

While she is waiting until after opening to set hours, she encourages people to utilize the Wear It Well website or call 662-401-6331 to request services, make donations and receive more information.

The Jan. 10 open house is being organized by the Community Development Foundation and allows the community to see the space. Holland said she is excited to be able to do more and said the home gives the organization stability while allowing them to be in the heart of Tupelo.

“I always want to impact lives beyond the particular day of service,” Holland said. “We want to have our facility open so that (the) services we provide can be ongoing versus being a one-time thing due to not having adequate space.”

Additional information can be found at www.wearitwell.org.