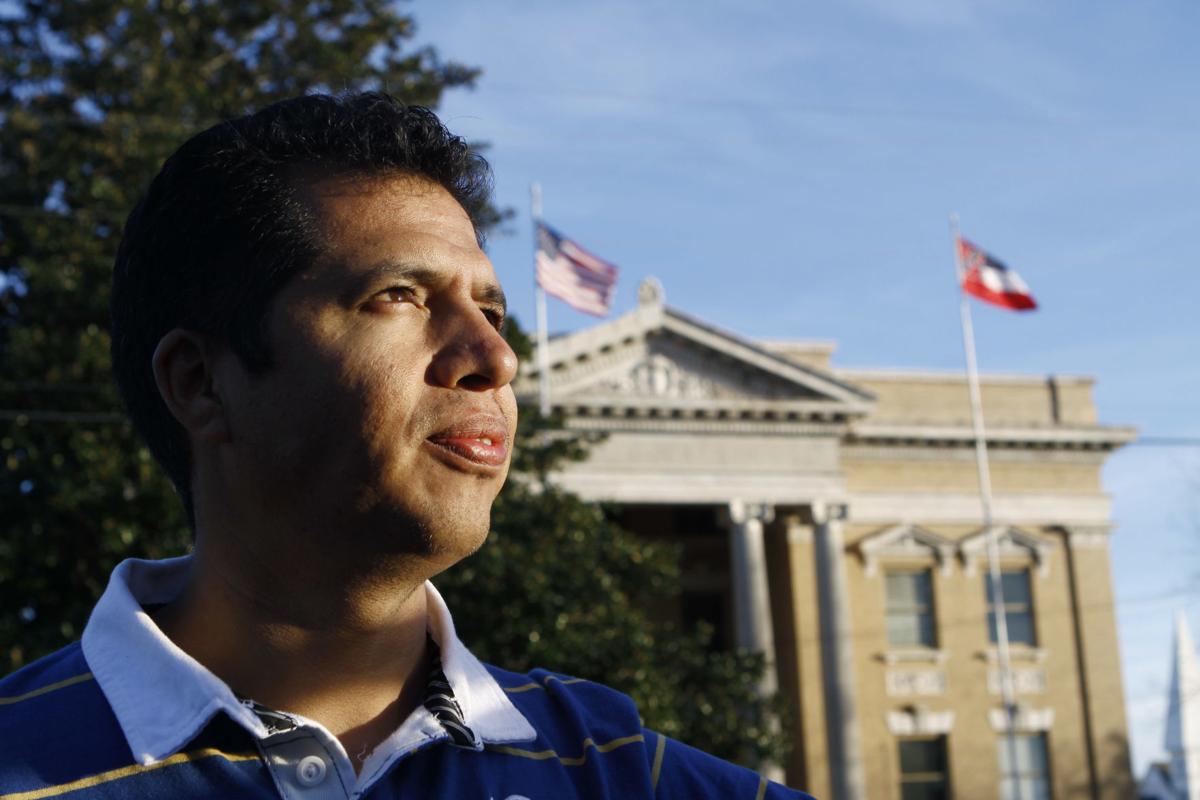 Standing outside the Jones County Courthouse in Ellisville in 2008, Ismael Cabrera said America’s educational opportunities for his two children are among the foremost reasons he wants to stay in this country. Cabrera was among the almost 600 immigrants picked up during a U.S. Immigration and Customs Enforcement raid at Howard Industries, a transformer factory in Laurel. A decade later, Cabrera and his family remain in the Ellisville area. 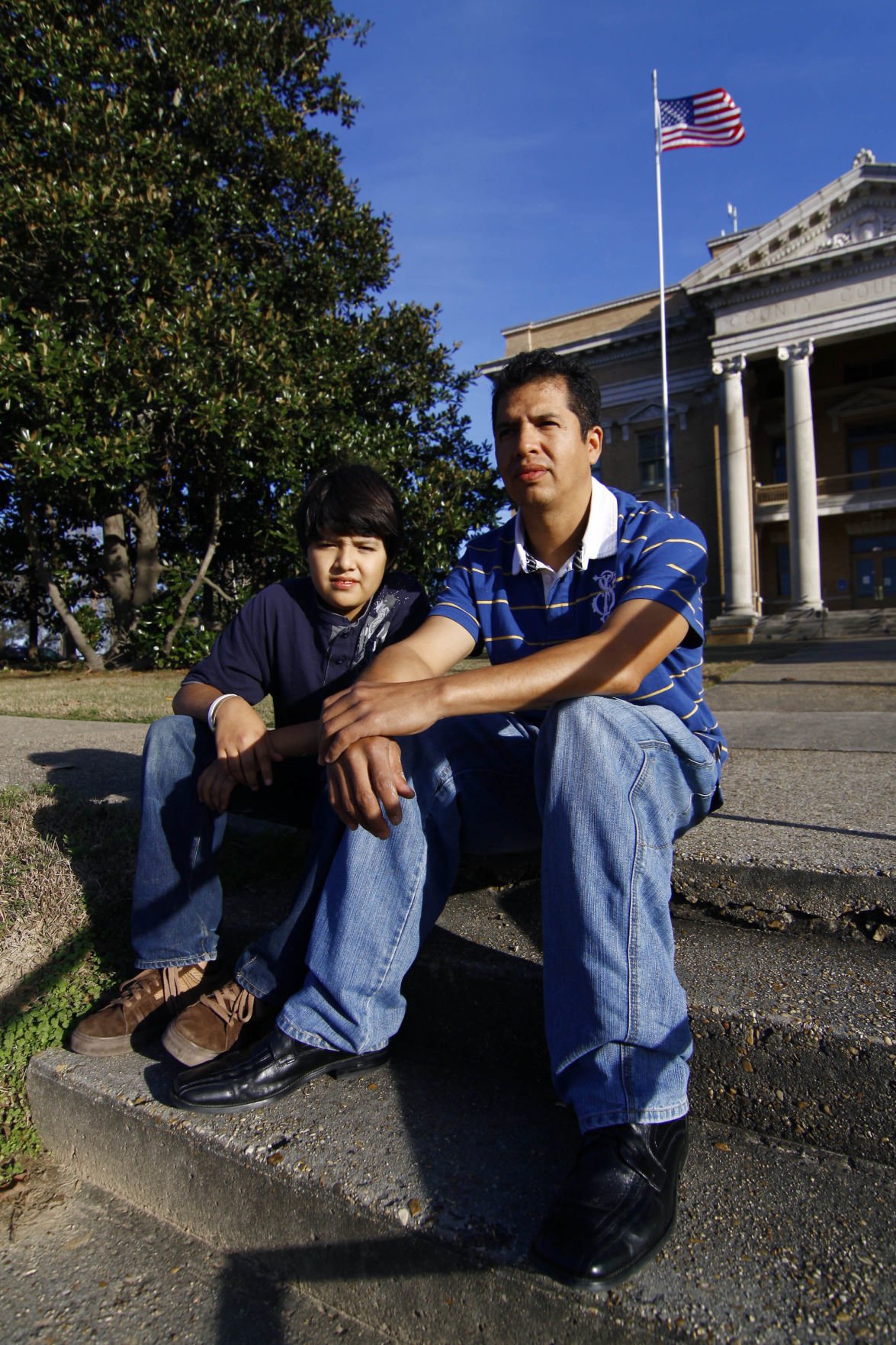 Ismael Cabrera and his 13-year-old son Cesar sit outside the Jones County Courthouse in Ellisville in 2008. Ismael Cabrera was arrested that year during what was then the largest single-workplace immigration raid in U.S. history at Howard Industries transformer plant. Over a decade later, the family remains in Ellisville. 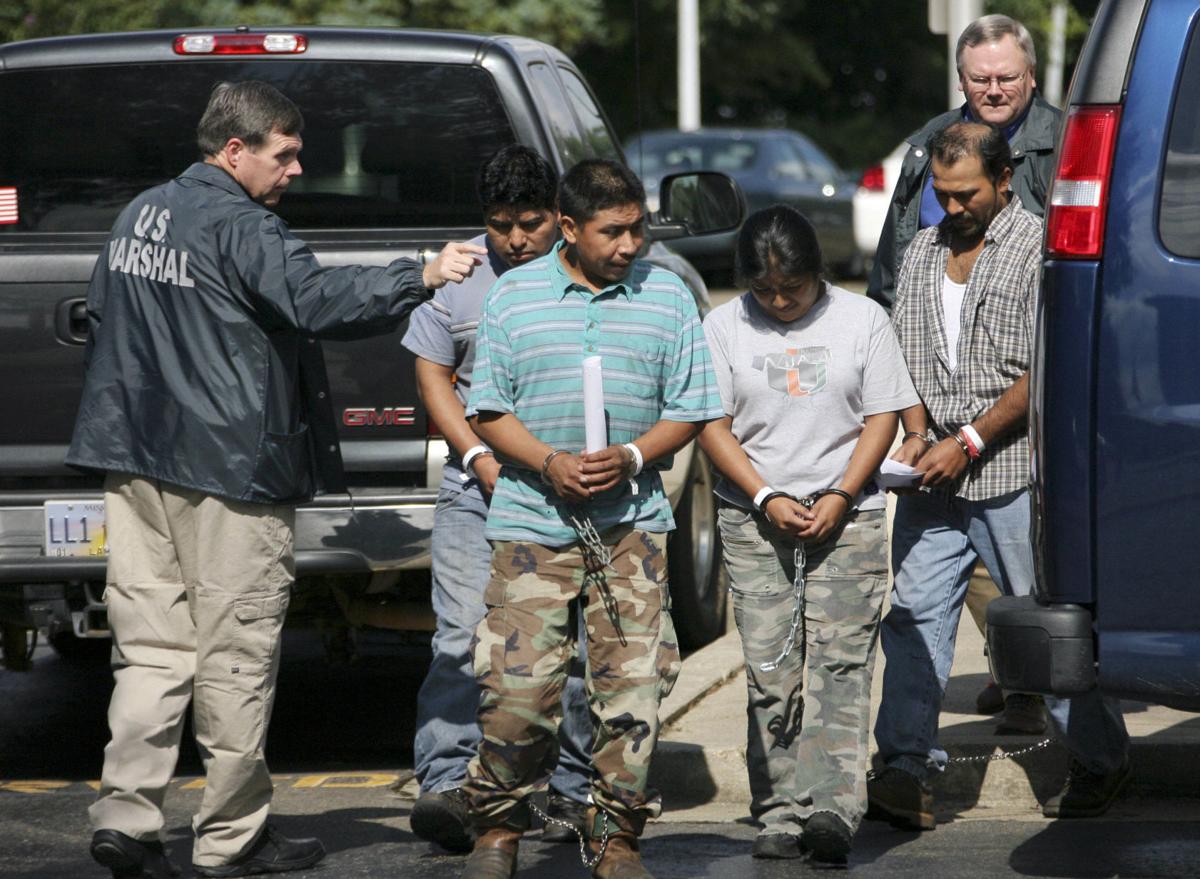 The raid and subsequent arrest of almost 600 suspected illegal immigrants was one of Mississippi’s top 2008 news stories.

Standing outside the Jones County Courthouse in Ellisville in 2008, Ismael Cabrera said America’s educational opportunities for his two children are among the foremost reasons he wants to stay in this country. Cabrera was among the almost 600 immigrants picked up during a U.S. Immigration and Customs Enforcement raid at Howard Industries, a transformer factory in Laurel. A decade later, Cabrera and his family remain in the Ellisville area.

Ismael Cabrera and his 13-year-old son Cesar sit outside the Jones County Courthouse in Ellisville in 2008. Ismael Cabrera was arrested that year during what was then the largest single-workplace immigration raid in U.S. history at Howard Industries transformer plant. Over a decade later, the family remains in Ellisville.

The raid and subsequent arrest of almost 600 suspected illegal immigrants was one of Mississippi’s top 2008 news stories.

The day Immigration and Customs enforcement came to town, Cesar Cabrera’s mother took him out of school. It was 2008, and he was in the seventh grade.

“My mom was really scared. She wanted to check us out when it happened because she was afraid ICE or immigration were going to come to schools,” Cabrera said.

Cabrera’s mother was visibly distressed when she came to pick him and his sister up. She didn’t tell them why until they arrived home. When she did, they were all stunned.

Cabrera’s father, Ismael Cabrera, was among 595 workers detained at Howard Industries during an Aug. 25, 2008 raid in Laurel. Impact from the shock remains, even more than a decade later.

At the time, news reports described the 2008 Laurel raid as the single largest workplace immigration raid in the state’s history.

That changed earlier this year.

In August, immigration authorities raided seven chicken plants in central Mississippi, detaining 680 undocumented workers in a series of events that echoed those in Laurel 11 years ago.

In both raids, ICE came in the early hours of the morning, catching everyone by surprise. Hundreds were arrested and the effects rippled throughout the area. Churches and community organizers scrambled to create shelters and food pantries, provide legal services and raise donations for those impacted. Parents did not take their children to school.

Organizers who assisted in the 2008 raid recall panic.

Marie Thompson was working as executive director of Mississippi Poultry Workers for Equality and Respect (MPower) in Morton when she received a call the morning of the raid. At the time, Thompson’s role with MPower involved poultry industry workers, but Howard Industries was in the manufacturing industry creating products such as electrical transformers and medical supplies. She lived in a hotel and worked on the ground in Laurel for three months assisting the families of the plant workers.

“Nobody was prepared for Howard Industries,” Thompson said.

Thompson arrived to widespread concern. The first priority was to ensure the children of arrested workers would be safe. To avoid involving the Mississippi Department of Human Services, organizers tried to find next of kin so they could have children released from daycares and schools.

The last child was released into care around 9 p.m., Thompson said. The next day, organizers got attorneys involved and alerted national immigration organizations. Thompson contacted nonprofits and Catholic churches. By evening, there was a team of half a dozen people to help coordinate support.

It took two days for people to be released and go through processing, Thompson said. Over 100 were released with ankle bracelets. Organizers opened a center with cots in Laurel. Fundraising began, as some landlords evicted families from their apartments for being undocumented.

Local churches, restaurants and businesses became allies by helping parents with childcare, and providing food. Organizers provided transportation to the Gulf Coast for ICE removal proceedings, provided food and made sure lawyers were present.

Just as stark as the physical needs were the mental ones.

Father Ken Ramon-Landry, of Sacred Heart Catholic Church in Hattiesburg, has worked with the Hispanic community in southern Mississippi since 1985. For months after the Howard Industries raid, he remembers a community gripped by fear.

“Rampant rumors of ICE raids from Walmart to Highway 49 to neighborhoods spread like wildfire,” Ramon-Landry said.

Businesses in the area also felt the aftermath, including gas stations and convenience stores. Agriculture, including poultry and catfish production, also felt pressure as some workers left.

“It was interesting to me, at the time, how much economic activity is generated or affected by something like this,” Thompson said.

“I did not know that nightmares repeat themselves”

The raids across central Mississippi earlier this year followed much the same script.

Suzie Middleton, youth minister of Immaculate Conception Church in Laurel, received news of the raids around 7:30 a.m. during what she described as the “mommy shift”: some mothers only missed being arrested in the raids because they were dropping off their children at school. Others were not so fortunate.

“When it first happened, it was very quiet for the first day or two. We could barely find out any information. By the third day ... we had lawyers here at our church and we had people start coming in,” Middleton said.

Like many area churches with members impacted by the raids, Immaculate Conception Church assisted those in need. The church had a functional food pantry within a week and gathered donations to help families with rent, as many didn’t receive a final paycheck and no longer had a source of income. Church priests coordinated with lawyers and interviewed families.

“More or less, the same thing that happened in 2008 is happening now,” Velez said. “In Howard, there were people just like now that couldn’t pay their rent, they couldn’t pay their light bill, because the working source (was gone).”

Ramon-Landry saw the parallels between the two raids as well, and believes that there may be more to come.

“My initial thoughts, having gone through both, is I did not know nightmares repeated themselves but, I fear, they may well be repeated again in the future with this current xenophobic administration,” said Ramon-Landry in an email.

In a press conference following the raids this year, Mississippi Immigrants Rights Alliance legal project director Patricia Ice discussed the 2008 road to highlight the longterm impact of these enforcement actions.

“Eleven years ago, we were attacked, if you will, by the Department of Homeland Security in Ellisville, Mississippi at the Howard Industries plant,” Ice said. “I am still working with people who were affected by that raid all these years later, so these types of events have long lasting effects.”

Life after his father’s arrest was uncertain. His father spent a month in a federal detention center in Jena, Louisiana. Cabrera remembers his mom getting an extra job to save money for his father’s bail and an attorney in addition to caring for her children. Even after his father was released, he still had to appear in court once a month for removal proceedings.

Ultimately, the case was left unsolved.

“We got blessed and they never closed or dismissed our case, but it’s still there,” Cabrera said. “They could easily be like, ‘Hey, we got to seize you and deport you back to Mexico,’ but I couldn’t tell you that part. I feel like (the immigration system) right now is very flawed.”

Some of the initial fear his family had around deportation has gone away with age.

“I’m sure that if you asked me when I was 15, 16, I would tell you yes, I would be incredibly worried because I was dependent on my parents, but now I wouldn’t,” Cabrera said.

Now 23 years old, Cabrera has been living in Ellisville since he was four and will start college there soon. After a lifetime growing up in Ellisville, he loves the community and feels American.

But since the 2008 raid, he said his family is more careful.

“In everyday life, everything’s OK, right? I have a job, my parents have jobs, we seem fine but when it comes to the point ICE could come and detain some of us, yeah, that part’s unpredictable,” Cabrera said.

In Cabrera’s own church, he knows of a child who had both parents taken in the 2019 raid. During the 2008 raid, he had friends with similar fates.

“Some of my friends, both of their parents were taken. I never heard of them again. There were some that came back, some that didn’t,” Cabrera said. “It’s a pretty sad time.”

Both Thompson and Cabrera said there was confusion for immigrants who were arrested in the 2008 immigration raid. After the raid, people had to attend monthly removal proceedings, during which several were given extensions of 30 to 90 days, Thompson said. Uncertainty over when immigration cases would be resolved caused some to make their own decisions.

“I’m only aware of about a dozen self-deporting. Everyone else just disappeared. They had their families, and they made their arrangements, and where they went, I have no idea and I don’t want to know,” Thompson said.

Cabrera feels the legal process and outcomes following the arrests were unclear and unorganized.

“There are cases (with other families) that weren’t closed, there are cases that were already closed and there were others (who were deported), but it’s just really random,” Cabrera said.

Velez said he didn’t know what would happen to families impacted by this year’s raids but was heartbroken over stories of children being separated from their parents.

“They’re not all criminals as they are trying to portray. They are family men and women who just were trying to give their children the break they didn’t have. They’re trying to have it better for their children,” Velez said. “They’re not out causing riots or scandalous things. They are in their homes taking care of their families, so it hurts. Whose heart is not broken to watch these young kids crying?”

Ramon-Landry worried immigration raids add onto existing stress for immigrant populations. While he does not advocate breaking laws, he said he believes better solutions to immigration are needed.

“Each Sunday now it seems another disappears. One more is in detention. Deportation and its fear looms. The focus is wrong because we have so many, who, if given the chance, would be citizens,” Ramon-Landry said.

Middleton felt the immigration raids would affect not only the families but also the community. She said it will emotionally leave a “scar on everyone” and result in the loss of students, the culture immigrant families bring and change the spiritual life of churches losing members.

“Hopefully, if anything else, it’s educating a lot of people locally to what happens to someone who is affected by the raids,” Middleton said. “Yes, I know a lot of people say, ‘They got what they deserve. It’s their fault their children were left alone.’ You can judge them all you want. My thing is looking towards mercy to help them through this time.”