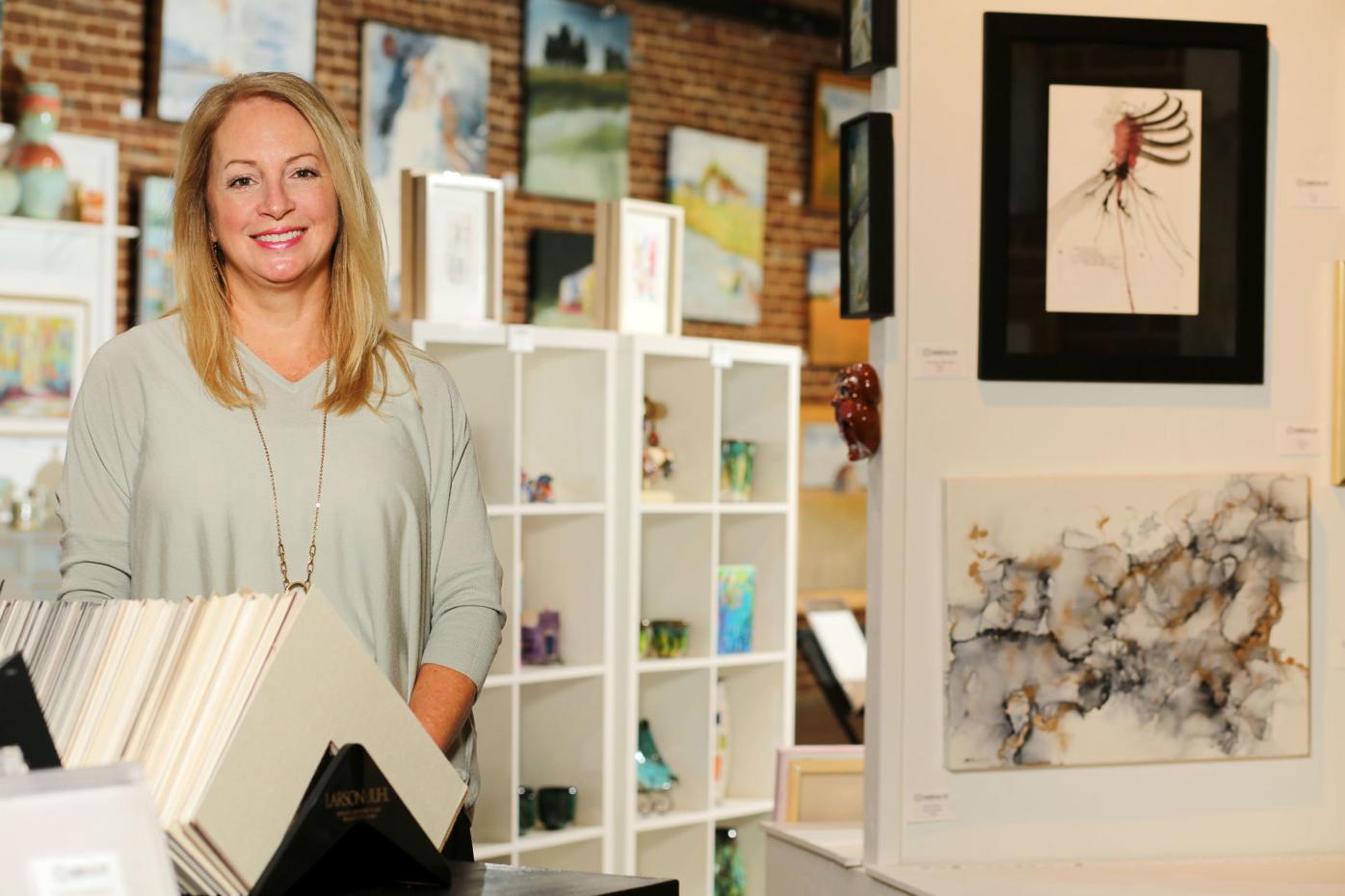 Kim Caron’s husband had to co-sign a line of credit when she decided to open her Tupelo art gallery because she had been a stay-at-home mom for a number of years. 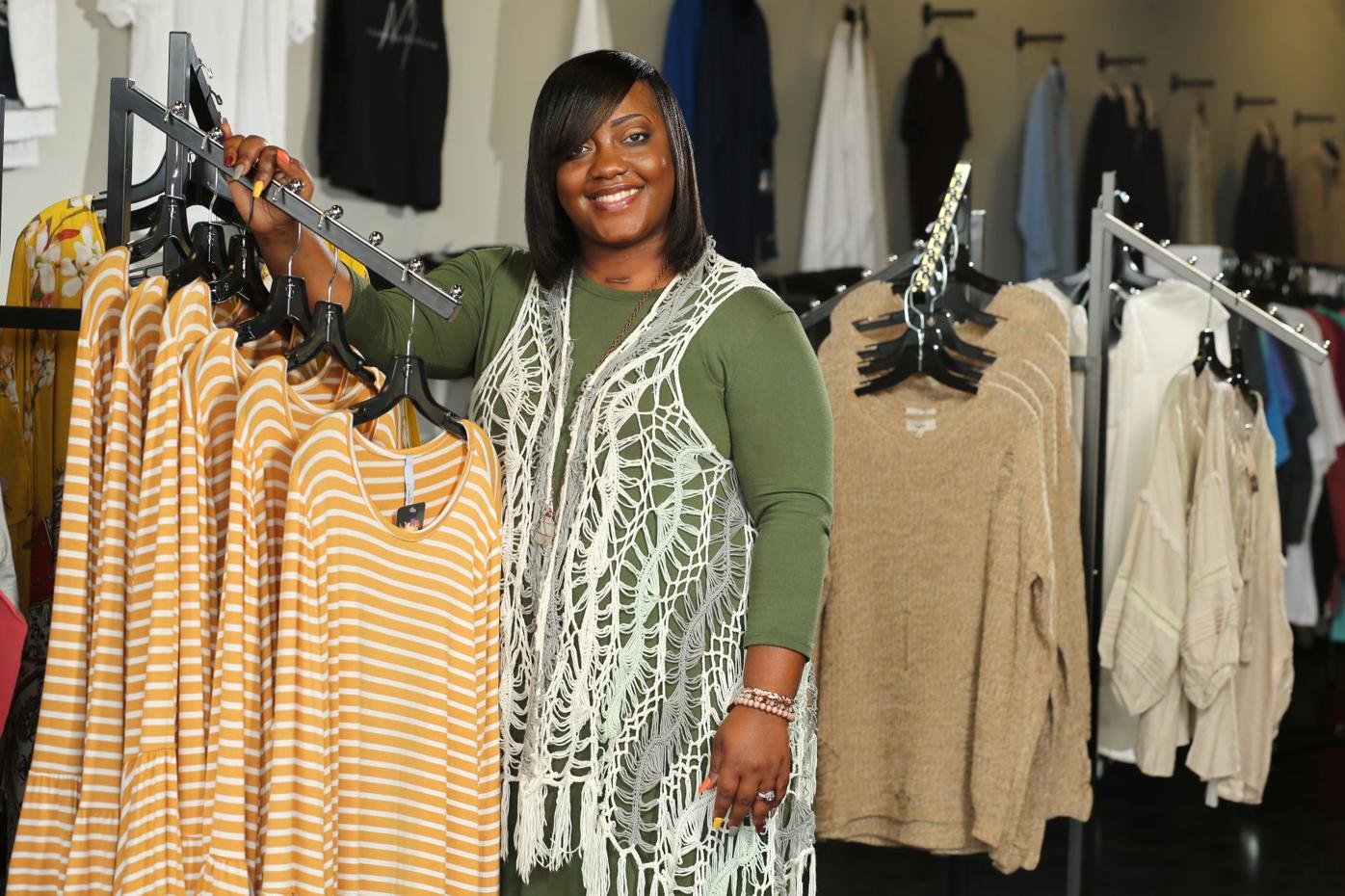 Nicole Judon opened her Peach Blossom Boutique as something to hand down to her daughter and bring in more money to support her family. She also works a second full-time job at Ashley Furniture as a payroll analyst.

Kim Caron’s husband had to co-sign a line of credit when she decided to open her Tupelo art gallery because she had been a stay-at-home mom for a number of years.

Nicole Judon opened her Peach Blossom Boutique as something to hand down to her daughter and bring in more money to support her family. She also works a second full-time job at Ashley Furniture as a payroll analyst.

TUPELO • Owners Kim Caron of the Caron Gallery and Nicole Judon of the Peach Blossom Boutique LLC differ in years of experience. Caron opened her art gallery in 2010, while Judon opened her boutique in May and an online boutique in 2018.

However, the two women have one thing in common: They are both part of the estimated 104,274 women who own businesses in Mississippi.

The ninth annual State of Women-Owned Businesses Report, commissioned by American Express and using data from both the U.S. Census Bureau’s Survey of Business Owners and relative changes in Gross Domestic Product, shows that women-owned businesses now make up to 42 percent of all businesses. American Express research advisor Geri Stengel said several of the Mississippi women-owned businesses tended to be small-scale.

Caron said she believes that in society now, women are leading the forefront on small businesses and entrepreneurship, but thinks there may still be challenges for women looking for capital investors for bigger projects and businesses. When Caron started her own gallery in downtown Tupelo, she found that even while the world has not necessarily been supportive of women in business, Tupelo has been.

“The community was so supportive, and has continued to support us, and it hasn’t been just our community. We ship art all across the country now, and that’s been exciting,” Caron said.

Caron went into business after being a stay-at-home mom for nearly 10 years and said the change took some getting used to. It did present some challenges – when she was seeking a line of credit, she had to have her husband co-sign since she hadn’t worked in years – she said the long-term presence of other female-owned businesses, such as the Main Attraction and Elizabeth Clair’s, let her know owning a successful business could be done.

Like Caron, Judon was also a stay-at-home wife and mother. Judon still works full time at Ashley Furniture as a payroll analyst, and said she was inspired to go back to work four years ago because of a motivation to have “more than enough” and contribute to her family finances. While working two full-time jobs is a challenge, Judon said she started the boutique as a way to have something to pass on to her daughter.

Both Caron and Judon were inspired by their families to go into business. Caron named both her father and husband as her mentors, and Judon’s husband and mother-in-law help run the boutique when Judon is at work at Ashley Furniture.

Caron currently employs one full-time worker and three part-time workers, all of whom are women. The choice was not intentional, however; Caron said often, women are the ones who seek part-time jobs. This trend carries over into women-owned businesses; the 2019 report noted that part-time entrepreneurship among women has grown 39 percent in the last five years. Stengel said this growth is often due to women starting businesses out of necessity to help supplement themselves or for scheduling flexibility.

A statistic that surprised Stengel was how highly diverse Mississippi was with its concentration of black women.

“It’s black women who are really driving the growth in women’s entrepreneurship, so in a sense, Mississippi isn’t taking advantage of that trend, so a policymaker might decide to support women entrepreneurs with policies such as family leave, affordable childcare, supplier diversity programs,” Stengel said.

Judon said she takes pride in being able to be an African American business owner and said she wanted to show women of all ethnic backgrounds that they can look good without spending a lot of money.

“It’s a challenge as a woman to get ahead in the world as it is, so to be able to cater to women and be able to help them piece together that nice outfit for the church, for work and to help them feel bold, beautiful, that’s the accomplishment and joy I have in owning this business,” Judon said.

Judon said she sees an average of 100 people a week in her store and has about 30 online customers a week. Since opening, she has been able to hire a part-time worker who also serves as a store model. Several friends, family members and coworkers serve as models, and she carries two vendors, Beloved Jewelry by Stacey Lipsey and Baby Clothing by Cashmere Cuties, in addition to her regular inventory of clothing.

For Judon, she said her motivation to open her business came after her mother fell ill shortly after the death of Judon’s father.

“I really wanted her to witness her daughter, who is an African American woman, start her business and accomplish that milestone while she’s still here,” Judon said.

Her mother is now legally blind, so one of the small tasks Judon likes doing for her mother is helping her pick clothing for her dialysis appointments. The compliments her mother often receives inspired her, as Judon said she would like to begin offering makeovers for those with vision loss within the next year.

Stengel said while the growth of women-owned businesses has been important in boosting the economy, she has not seen some of the same strength in Mississippi as in other states.

“In the last five years, Mississippi’s employment rate has gone down, and when the unemployment rate goes down, it means that necessity-women entrepreneurs return to the workforce,” Stengel said.

Caron said her biggest challenge has been changing locations three times, but she believes the current location has proven to be the best spot in showcasing the art of more than 45 consigned artists and a growing custom framing business. Her goal has always been to showcase Mississippi artists worldwide, and she said social media has assisted tremendously in promoting this goal. She now ships art to other states and has shipped to Europe.

“It didn’t happen overnight. It was plugging everyday and pushing and having great staff who have the same goals as I do to showcase our artists and try to get that art sold,” Caron said.

Mom gets emotional during heated forum on critical race theory