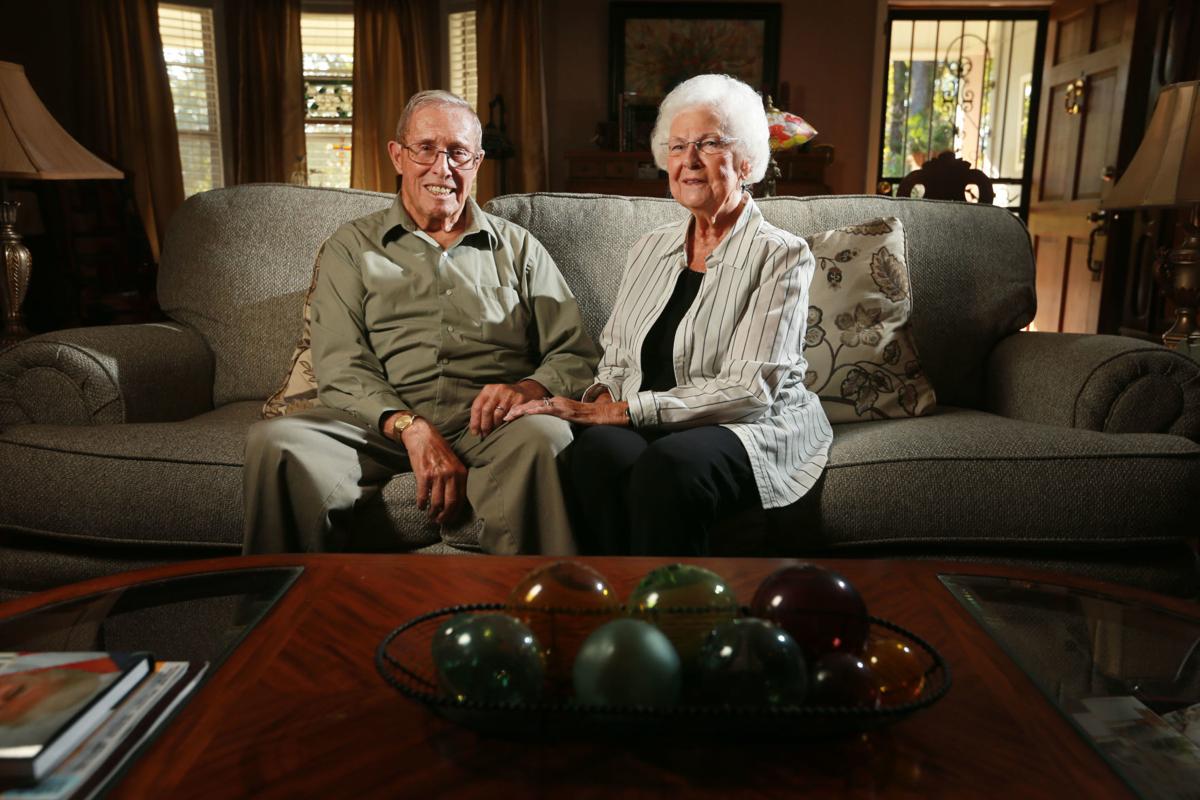 Jesse Clift, a veteran of three wars, and his wife, Elsa, have been married five years. 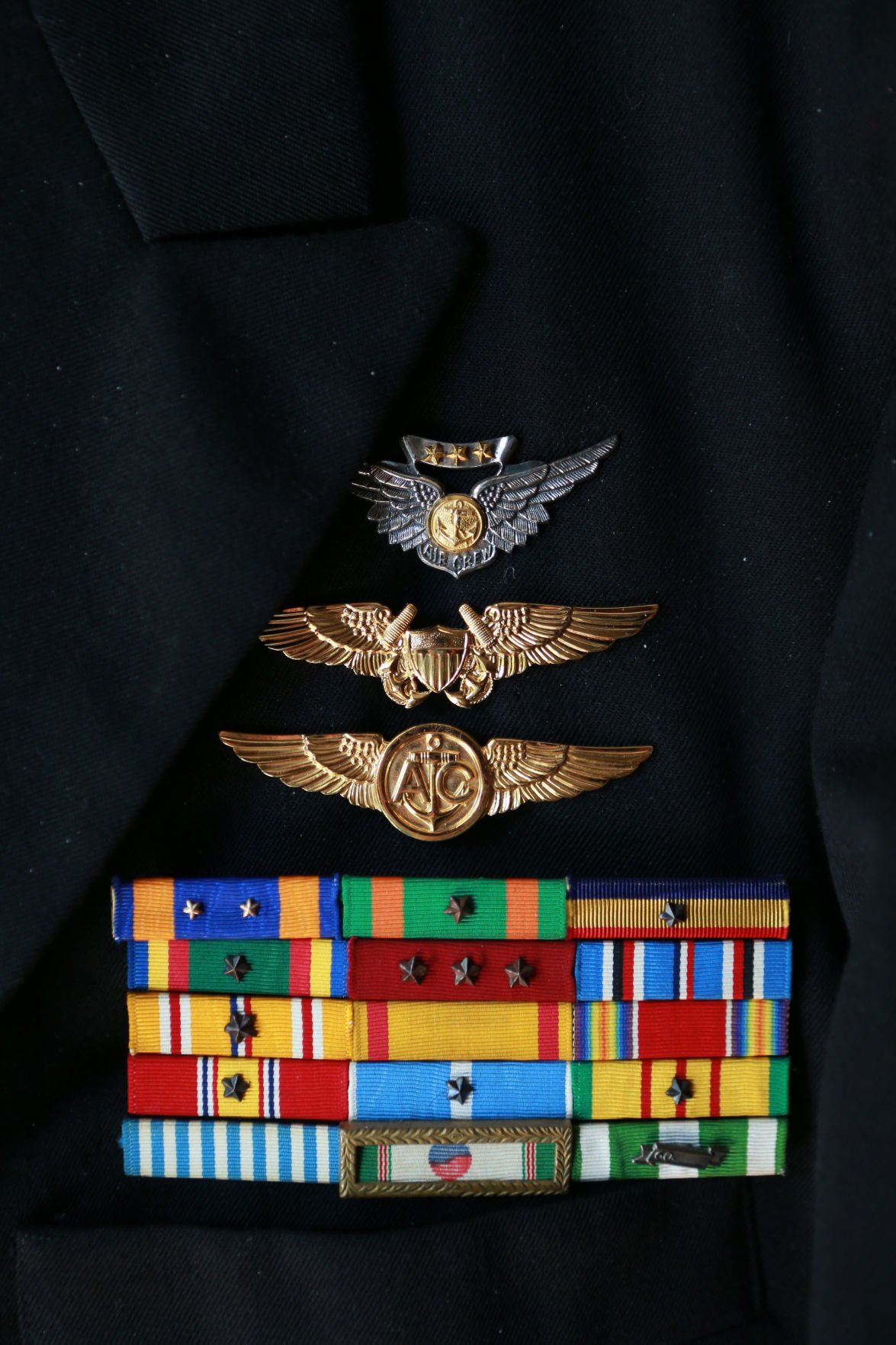 Jesse Clift still has his Naval uniform that has his ribbons from his service throughout his years. Among the ribbons are his Navy Air Medal, Navy Presidential Unit Citation and his medals for serving in World War II, Korea and Vietnam. 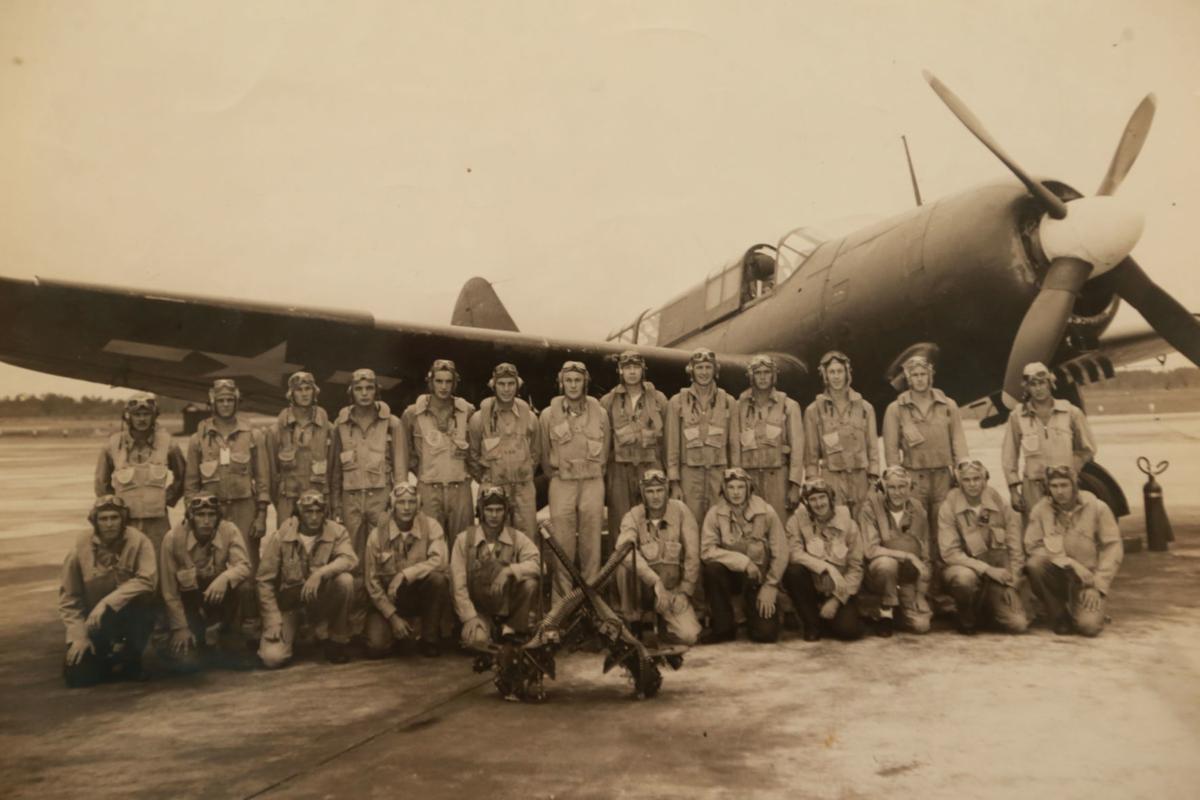 A group photo of Jesse Clift’s flight class that was training on the SB2C Helldiver. He is the first one on left, kneeling on front row.

Jesse Clift, a veteran of three wars, and his wife, Elsa, have been married five years.

Jesse Clift still has his Naval uniform that has his ribbons from his service throughout his years. Among the ribbons are his Navy Air Medal, Navy Presidential Unit Citation and his medals for serving in World War II, Korea and Vietnam.

A group photo of Jesse Clift’s flight class that was training on the SB2C Helldiver. He is the first one on left, kneeling on front row.

TUPELO • Jesse Clift has seen a lot in his 92 years of life. He’s served in and survived three wars: World War II, the Korean War and the Vietnam War.

Clift was born Sept. 9, 1927, and grew up on a farm in Stecker, Oklahoma, where cattle and cotton were his family’s primary source of income.

Still a high school student, Clift made the decision to join the Navy while his parents were away on vacation. He’d just turned 16. He went to the recruiting station in Chickasha, Oklahoma, and told the recruiters he was 17. They said he’d need a parent’s signature to join.

“So I took enlistment papers, went home, took a check out that had gone through the bank in my father’s name, I put it underneath the papers and traced it over,” Clift said.

The forged signature got the approval of a local notary. Clift traveled to Oklahoma City where he was sent to San Diego, California, for boot camp in 1943.

He was asked if he’d like to work with submarines or aviation. He chose sky over sea and was sent to Memphis for aviation and radar operator school before going to the Naval Air Station Cecil Field in Jacksonville, Florida.

After World War II ended, Clift and many other crewmen were sent to Naval Station Great Lakes in Illinois for a dispersing clerk course. He was then assigned to a separation center in Norman, Oklahoma, to help process and discharge enlisted soldiers and ended up helping with pay records as well.

Clift was discharged in June 1946. He returned to his hometown, got his GED and enrolled in junior college. He attended only a couple of months before getting a job helping build a state highway from Anadarko to Cyril, Oklahoma.

He reenlisted with the Navy in November and returned to San Diego where he worked on the USS Saint Paul cruiser.

He was part of VC-11, the first airborne and submarine radar squadron in the Navy. He was second class when the squadron moved to North Island Naval Air Station.

Clift went to Memphis for aviation electronics school with a friend, William Culp, who introduced him to Reba, who would become his wife.

The two married as the electronics school was wrapping up and three days later, the couple returned to San Diego.

Eleven months later, a pregnant Reba was having labor pains when Clift took her to the Naval hospital at North Island. The next morning he returned to the squadron but was told to go back to the hospital and be with his wife.

He was present when his daughter, Carolyn, was born. Not long after, he got word from his squadron chief that the Korean War was escalating.

“You know the carrier that pulled in here 10 days ago, they’ve been loading and unloading ammo, bombs and supplies on?” the chief said. “It’s going to pull out of here on Thursday morning, and you and your radar team are going to be on it.”

During the Korean War, Clift said his squadron would often fly offshore, especially after things began to escalate further in the summer of 1951. They were unable to fly over land for fear the Koreans or Chinese would down and capture a plane.

He recalled one occasion where an airplane was having problems while returning to its carrier and he was in a plane that went out to escort the distressed pilot.

“I don’t remember what happened, but some way we had lost some fuel and we got a little wet,” Clift said.

They had to land the plane in the ocean. Another nearby carrier sent a helicopter over to pick the men up and take them aboard. Fortunately no one was hurt, Clift said.

After the war, Clift returned to Memphis where he worked as an instructor at the Navy electronics school from 1952-55.

Over the next few years, Clift lived and worked with the Navy everywhere from Olathe, Kansas, and Newport, Rhode Island, to Okinawa, Japan, and Adak, Alaska.

Around 1960, Clift was transferred to Jacksonville, Florida, and left after about three years to join the VF-32 fighter squadron stationed in the Mediterranean. He said the Navy flew him to Marseille, France, where he joined the USS Saratoga.

He fought in Vietnam with that squadron and recalls being ejected from an F-4 aircraft that was having engine trouble.

After returning to the United States, Clift went through more schooling in Memphis and worked in Philadelphia on ship overhaul where he was assigned to help maintain aircraft.

When he was offered a new job working on the road, he faced a tough decision and ended up passing on the job to be close to his family.

“Under different circumstances, you’d be overjoyed to get a job like that,” Clift said. “But you have to think of the family. That’s one of the fallacies of the military.”

His last assignment in the Navy was at a test center in Patuxent River, Maryland, where he was assigned as a maintenance officer on the flight test division of carrier aircraft. The highest rank he reached was lieutenant commander.

Clift retired in November 1970 and move to Mississippi where he bought a farm and built a house in Saltillo.

He worked for FMC Technologies for 15 years before retiring. His wife Dale died in 2013, and Clift now lives with his third wife, Elsa. They have been married five years.

Clift said the biggest lesson he took away from his time in the service was learning how to work with people.

“Learn the individual and that individuals have to be treated differently,” Clift said. “You talk to them and ask them a lot of things and let them open up for you.”

Perhaps the largest lesson he’s learned in life, he said, is “to take advantage of opportunities.”

It’s certainly something Clift’s done often in his lifetime – a result of his teenage decision to join the Navy which led to his opportunities to travel the world.

Military veterans were recognized for their service by Rep. Trent Kelly and U.S. Sen. Roger Wicker, R-Miss., at Veterans Day programs in north…

See the most memorable moments from the Grammy Awards