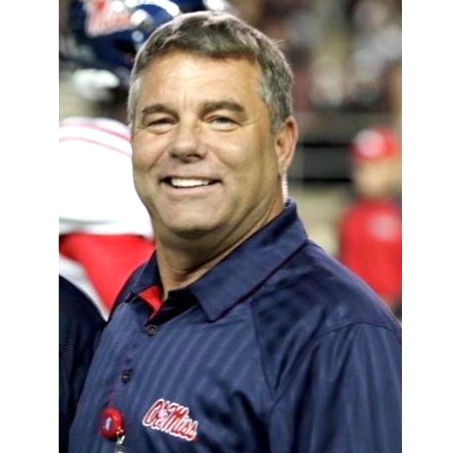 Donny Smith, whose faith- and family-fueled life was centered in Tupelo, even as it often played out from coast to coast during the years he captained the Ole Miss football team's equipment truck, died on Friday. He was 58. Although Smith was perhaps most well known for his work with the university, the red-and-blue cab often parked along Gloster Street when it was not hauling gear from one stadium to the next, he was, in his private life, a charismatic and welcoming safe harbor for people in need. Before he died of a heart attack, he spent much of this month preparing meals and working on other relief efforts connected to the coronavirus pandemic. He had an entrepreneurial spirit coupled with a big personality: friendly, gregarious, the opposite of a clenched fist. Favorably compared to Barnabas, noted in the Bible as an encourager, by his friends, Smith's curling, contagious smile was the entryway to a man who was a mentor to many and an enthusiast for Ole Miss football, hot rods, construction and ministry. He was born Donald Cleveland Smith, Jr. on Sept. 11, 1961 in Oxford, the first of Donald and Elizabeth Smith's five children. He mostly grew up in Oxford, where he enjoyed playing Little League baseball and building models, and graduated high school there. He later moved to Tupelo and lived there for more than 30 years. But, in keeping with a ceaseless interest in anything with an engine, he often commuted to his hometown to work alongside his father on the 1999 Peterbilt that the Ole Miss football team depended on for game supplies from Starkville to Fresno, Calif. "When we come into these places, people are as excited about this truck as anything else," he told a university website in 2013. "They're waving, clapping and taking pictures." Back in Tupelo, Smith was the Campus Administrator for the American Family Association, attended Hope Church Tupelo and previously served as a deacon, served on the board at Tupelo Christian Preparatory School and was an avid fan of the school's athletic teams. Donny's life is best described by the words friend and caretaker. When he was not spending time with his beloved and far-reaching family, he was often indulging his love for animals, including his dogs Charlie Brown and Nahla and more horses than anyone can remember. Donny's love for people and service were the traits for which he was known - his days were spent tirelessly caring for his horses, feeding the homeless, serving on the Hope Church IMPACT team, fixing flat tires for strangers, lending a helping hand to anyone with a need and spreading his bright, contagious smile and positivity. Donny was truly known as a good man by all, but a great man by those closest to him. They take comfort in knowing he was welcomed by his parents and Savior into his eternal mansion Friday with the words "Well done, my good and faithful servant." Donny is survived by the wife he adored, Lorie, to whom he was married for 33 years and was the apple of his eye; their daughter, Sadie Smith-Ayers of whom he was most proud and loved more than life itself, and her husband, Logan Ayers, who he fathered and loved as his own; his chosen family, Kerry and Elizabeth Coke, for whom he had a deep and special love and the rest of the "Lee" family. Four siblings -- Sally (David) Blinder of Atlanta; and Shellye (Chad) Mills, John Smith, and William (Melissa) Smith of Oxford -- also survive, as do many nieces and nephews. Memorial contributions may be made to the American Family Association (P.O. Drawer 2440, Tupelo, MS 38803), Eight Days of Hope (P.O. Box 3208, Tupelo, MS 38803), and the Regional Rehab Center (615 Pegram Drive, Tupelo, MS 38801). Services are pending, and will be announced later by Holland Funeral Directors - Tupelo Chapel, who are honored to serve their friends. Condolences may be posted at hollandfuneraldirectors.com.