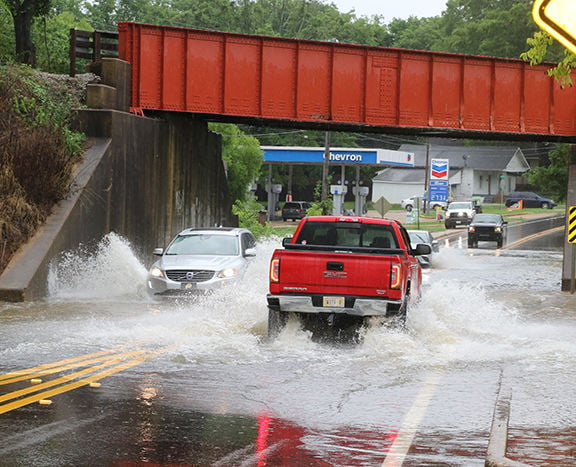 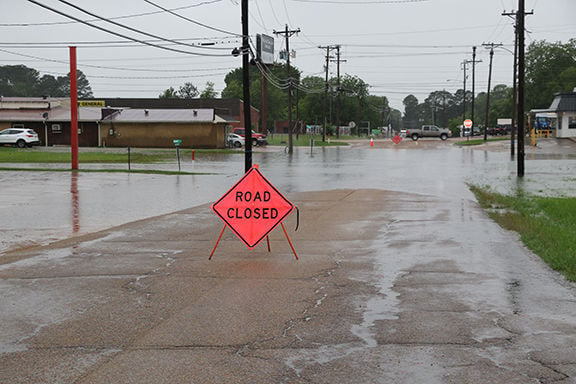 Reynolds Street Closed to traffic as it flows to Highway 15 beyond the Salvation Army.

Reynolds Street Closed to traffic as it flows to Highway 15 beyond the Salvation Army.

Pontotoc County and city of Pontotoc officials said that many roads and several streets remain flooded because of torrential rainfall over the past 24 hours. Residents in some areas have reported six to 12 inches of rainfall since Tuesday morning.

At noon today (Wednesday, June 9) , WTVA weather officials said an additional 1 to 3 inches of additional rainfall are possible through this afternoon. Rain chances for Thursday are 40 percent.

Pontotoc Mayor Bob Peeples said that Reynolds Street is closed at the intersection of Highway 15 Bypass (by Spuds) because of a collapsed manhole.

And at the Tanglefoot Trail underpass on Oxford Street two to three feet of water is standing on a 40 yard section of the street. Motorists are urged not to try and drive through the deep water under the overpass.

Pontotoc County supervisors said that numerous county roads are flooded from the incessant rain that has fallen since early Sunday morning.

First District Supervisor Wayne Stokes said he has several roads that the water is over, “all roads are passable but people need to slow down.”

Stokes said that Brassfield Road in Parrish Bottom is a trouble spot as well as Tuscumbia Road and Old Highway 15 at Central Avenue beside the bridge are flooded.

“Don’t take anything for granted,” he cautioned. “Don’t drive through deep water because the culvert may be out.” Stokes said it would have to quit raining and the water go down before they can make a full check of his district. “Right now (Wed., June 9) we have a small window of time to look around, but there is more coming tonight.”

In the second district, supervisor Mike McGregor said that nearly every road he has is underwater.

“Don’t drive off in it,” he cautioned, “especially in the low places there could be trenches in the roads. We are getting more rain tonight and tomorrow and there could be more gullies washed across the roads.”

McGregor said it will be the next day or two before he knows the total damage to roads and bridges in his district and the rain will hamper the efforts through Thursday, at least. “Meantime, please be careful and drive slow,” he emphasized.

Brad Ward said that district three has culverts washed out and ditches are also washed.

Ward said that Oak Forrest Road is not passable because there is no culvert. “Only the people who live on that road are allowed to go down it at this point,” he said. He also noted that Patterson Road has ditches out.

“Chesterville Road is impassable, Russell Road and Levi Road are in bad shape, Nanny Road in the bottom is impassable, a bank has slid off onto Rowland Road and the southeast end of Kings Highway is flooded, along with the Belden/Endville Road” Wright reported. “And it’s so wet the trees are just falling out of the ground.”

“We’ve been fighting this rain water since Tuesday afternoon, folks need to be praying that the rain will stop,” he urged. “One man said the water has backed up inches from his door and I urged him to pray for it to stop raining.”

“We’re working hard as we can, but they’re calling for more rain through Saturday. Folks need to be very careful traveling and avoid driving at night because you can’t see where a flash flood has covered a road.”

In the Fifth District Dan McKnight said that Wicker Road is closed and water is over the roads in all the low lying areas where it always floods. “I want people to be careful,” he said. “Also bear in mind that the trees are heavy with the water on their leaves and they will fall, so especially if you are traveling at night, give your self extra time to get there and slow down even on a highway that is clear.”

David is managing editor of the Pontotoc Progress.

China must be held accountable for global pandemic