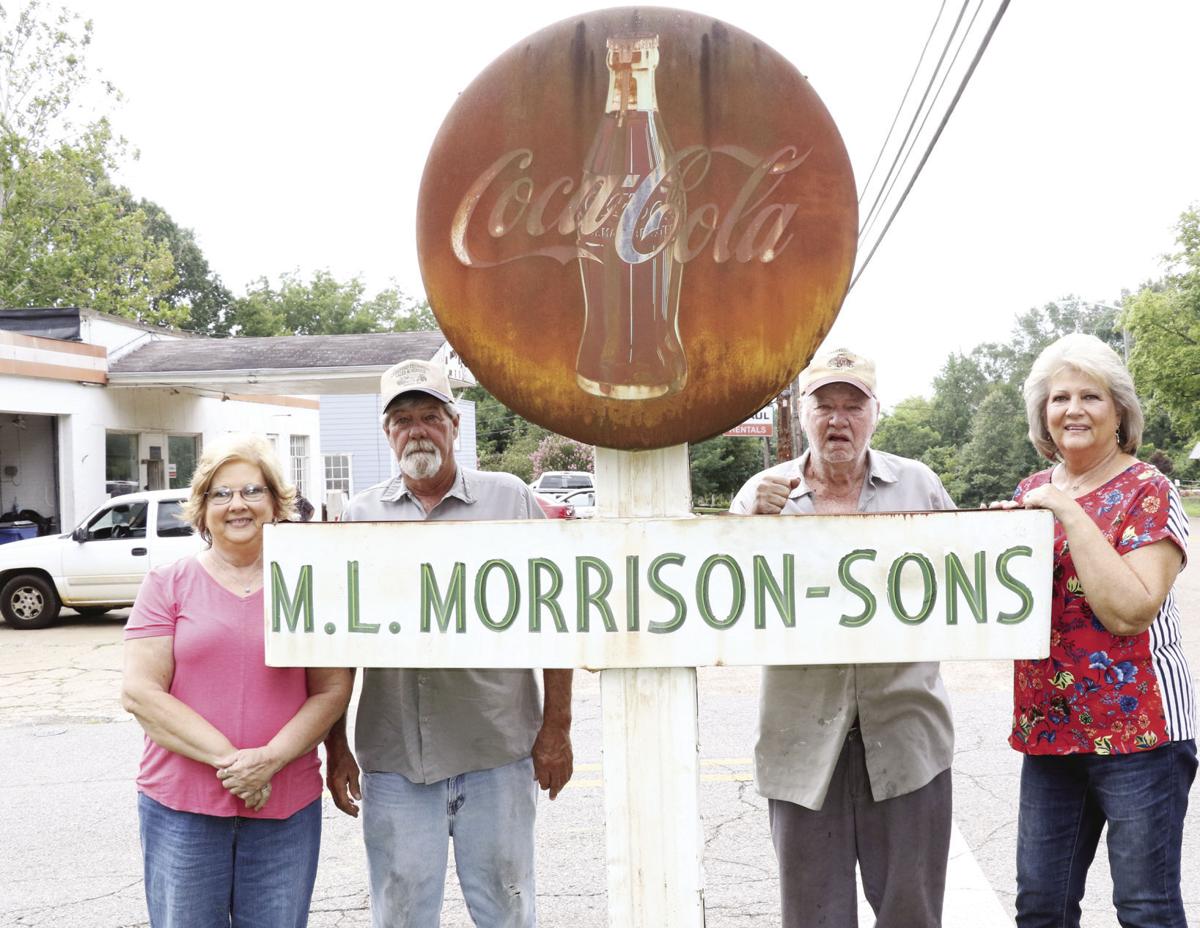 M. L. Morrison-Sons Service Station, a cornerstone in Pontotoc on South Main Street for the past 69 years, officially closed last Friday (July 31). The business was founded by Marvin and Gernie Morrison on August 1, 1951. Mr. Marvin’s sons Lamar (center left) and James Ray Morrison (center right) are retiring after decades of running the full-service station. Joining them last Friday for a photo of the iconic landmark sign were sisters Patsy Morrison Collums (left) and Joyce Morrison Warren. The sign is being moved to Casey Morrison’s home off of South Liberty Street in Pontotoc. 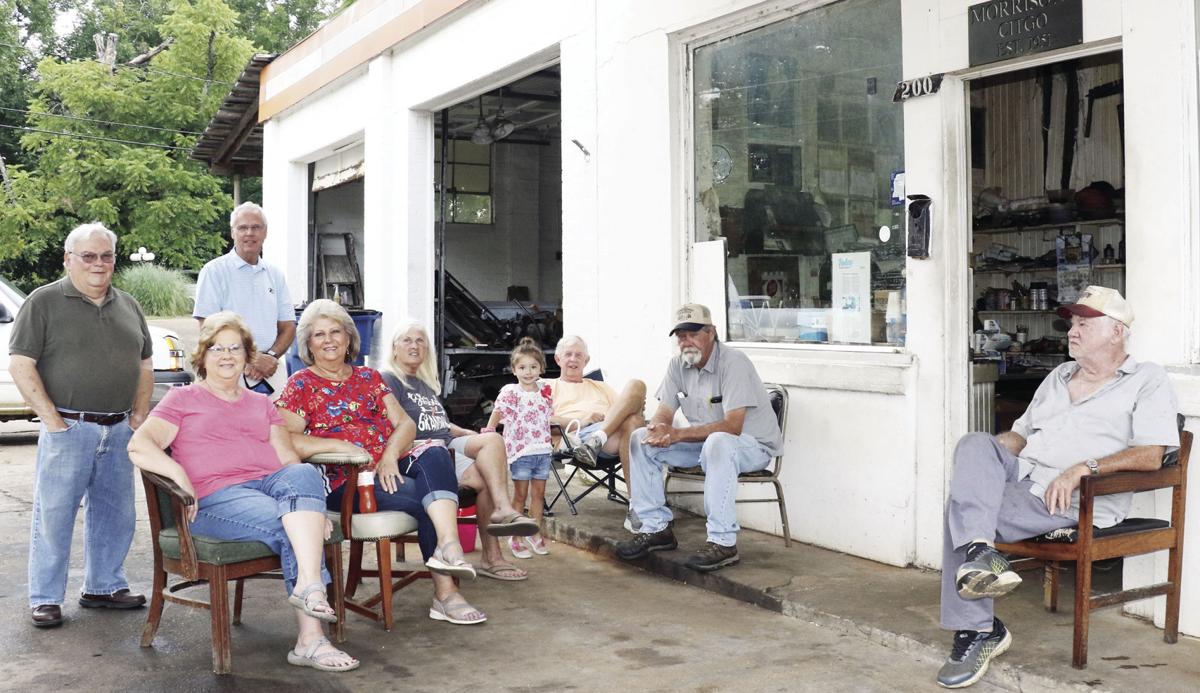 M. L. Morrison-Sons Service Station, a cornerstone in Pontotoc on South Main Street for the past 69 years, officially closed last Friday (July 31). The business was founded by Marvin and Gernie Morrison on August 1, 1951. Mr. Marvin’s sons Lamar (center left) and James Ray Morrison (center right) are retiring after decades of running the full-service station. Joining them last Friday for a photo of the iconic landmark sign were sisters Patsy Morrison Collums (left) and Joyce Morrison Warren. The sign is being moved to Casey Morrison’s home off of South Liberty Street in Pontotoc.

Last Friday sixty-nine years of business ended on a good day, one with a cool morning breeze out of the southwest carrying the smell of rain, one perfect for sitting outside the service station, not fretting over what you ought to be doing, and telling stories.

James Ray Morrison emerged from the old Citgo on South Main St. in Pontotoc, a building full of tools, grease-stained work clothes, and furnishings that were antiques 20 years ago.

“I can still see daddy changing out that water pump the day he had that stroke,” Morrison said, talking to the folks gathered to reminisce on Friday.

“That was really the day we lost him,” said James’s brother, Lamar. “Technically, he was working the day he died.” Their dad, Marvin Morrison, passed away three months later on Feb. 5, 2011.

A framed picture in the cluttered office showed Mr. Marvin standing proudly beside his 1956 Chevrolet pickup. As the friends gathered last Friday to say thanks to the Morrison boys, their dad’s truck sat in one of the service bays. The truck still runs.

Today there were no clanking lug wrenches or thumping air-compressors, at least not yet .The heavy, hydraulic floor jack wasn’t grinding across the concrete.

James Ray and Lamar had sold the last gallon of gas the day before.

Lamar said he remembered, by the way, the time his daddy had him fill up a five-gallon bucket and put it in a woman’s car in the hospital parking lot. It cost her a whole $1.50. Unless somebody came in for an oil change or needed a flat fixed, things would be awfully quiet today.

James would talk with old buddies, like Jerry Austin, who stopped by and told about Mr. Marvin fixing a U-joint on his 1957 Chevy. Lamar might thumb through one of his worn, tobacco-stained Western novels.

At 6 p.m. last Friday evening the Morrison boys would pull down the bay doors, turn off the lights, and lock the door for the last time.

Marvin Morrison and his brother Gernie started running the City Service Oil Company in 1951. They had no schooling as mechanics, just plenty of shade-tree experience. Plowing with a mule in the Algoma soil taught them the value of hard work, James said.

The Morrison’s’ reputation for good service and fair dealing spread, and the station took off.

“Daddy was wide open, from five in the morning until ten at night,” James said.

Marvin and his wife, Ouida had the two boys as well as two girls, Joyce and Patsy. All the kids grew up working at the station. They washed cars, changed oil and whatnot.

“We learned to have real joy here, working as a family,” said Joyce. “Daddy taught us a good work ethic, and how to treat people.” Joyce looked into the office through the plate glass. “We need more of that in the world today,” she said.

Marvin took the reins of the business himself in 1967, about the time the company changed its name to Citgo. The family-run station became a fixture in town.

Fixing brakes, replacing spark plugs and, of course, pumping gas kept the Morrison’s busy. Those were the days of full-service gas stations, a concept as foreign to modern business models as kangaroos to Kansas.

When a person pulled into the Morrison’s’ Citgo someone pumped their gas, checked their fluids, and washed their windshield. The attendants even smiled and thanked them.

A weary and lost motorist from out of town wouldn’t find a cappuccino machine or souvenir rack, but a peek at an old-fashioned road map, a splash of engine coolant, or the best directions in town on where so-and-so lived were in good supply.

“It was a different world back then,” James said. “People weren’t in such a hurry. They took time, were polite and careful. That’s the way we came up, the way we did business.”

James shook his head. “Self-service stations changed everything,” he said.

Even Mississippi towns have changed, as small farms and mom-and-pop businesses have disappeared, but the Morrison kids held onto the idea of local ownership and full-service. Time waits for no one, though.

James put his hands on his knees.

“I reckon they’ll come take down the sign Monday,” he said, referring to the iconic, rusted Coca-Cola sign bearing the family’s name. The brothers and sisters will hang onto that.

Joyce and Patsy talked about how young people often want to leave their hometowns.

Once they realize what they had, they can’t wait to get back, the girls said. James said he’d seen a lot of the world while serving in the military, but Pontotoc was home.

“When I came back I thought it was the prettiest thing I’d ever seen,” James said. “The people here are different, in a good way. That’s the best I can say it. They’re family. That’s what’s made this town what it is, and this station what it is.”