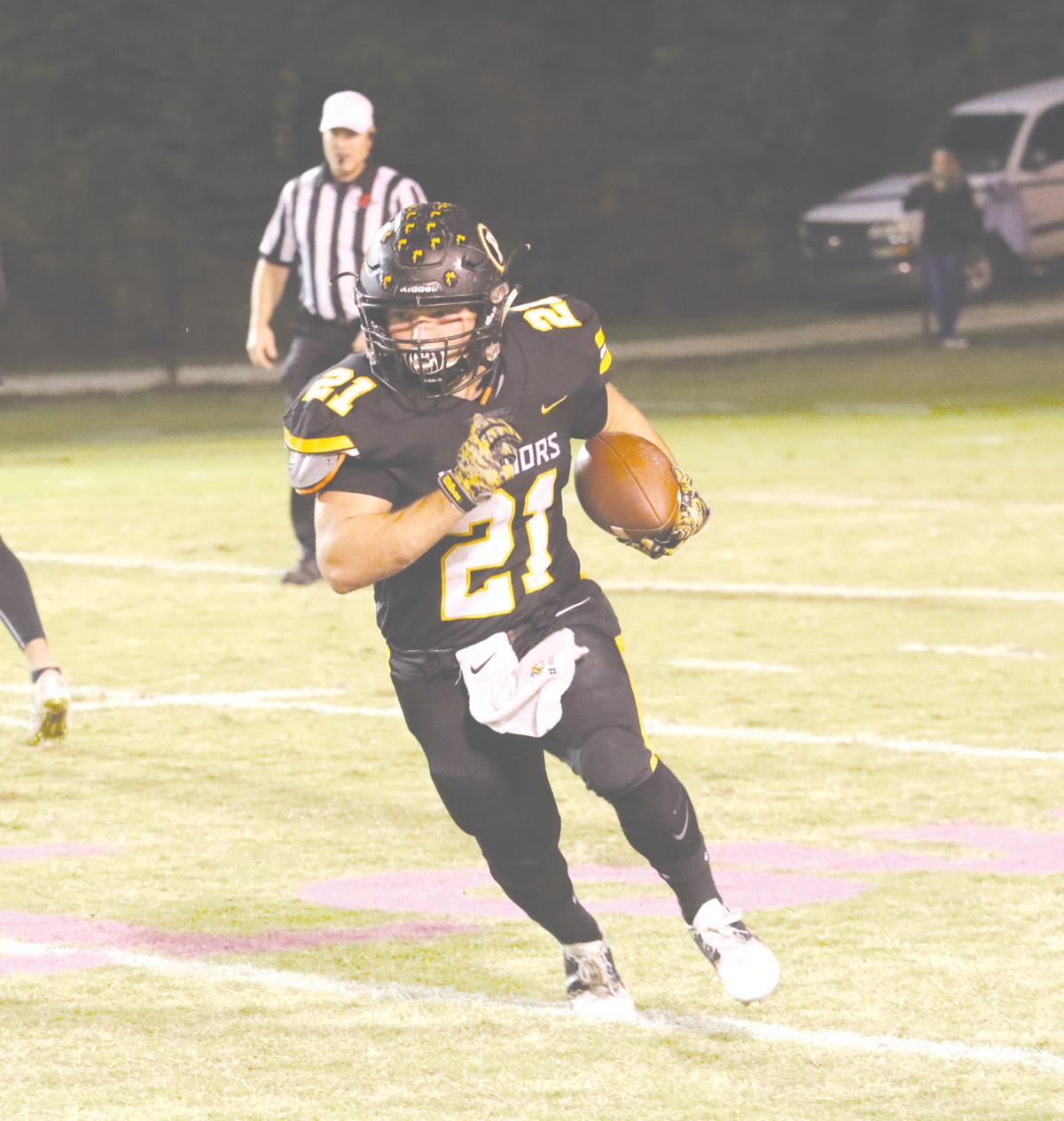 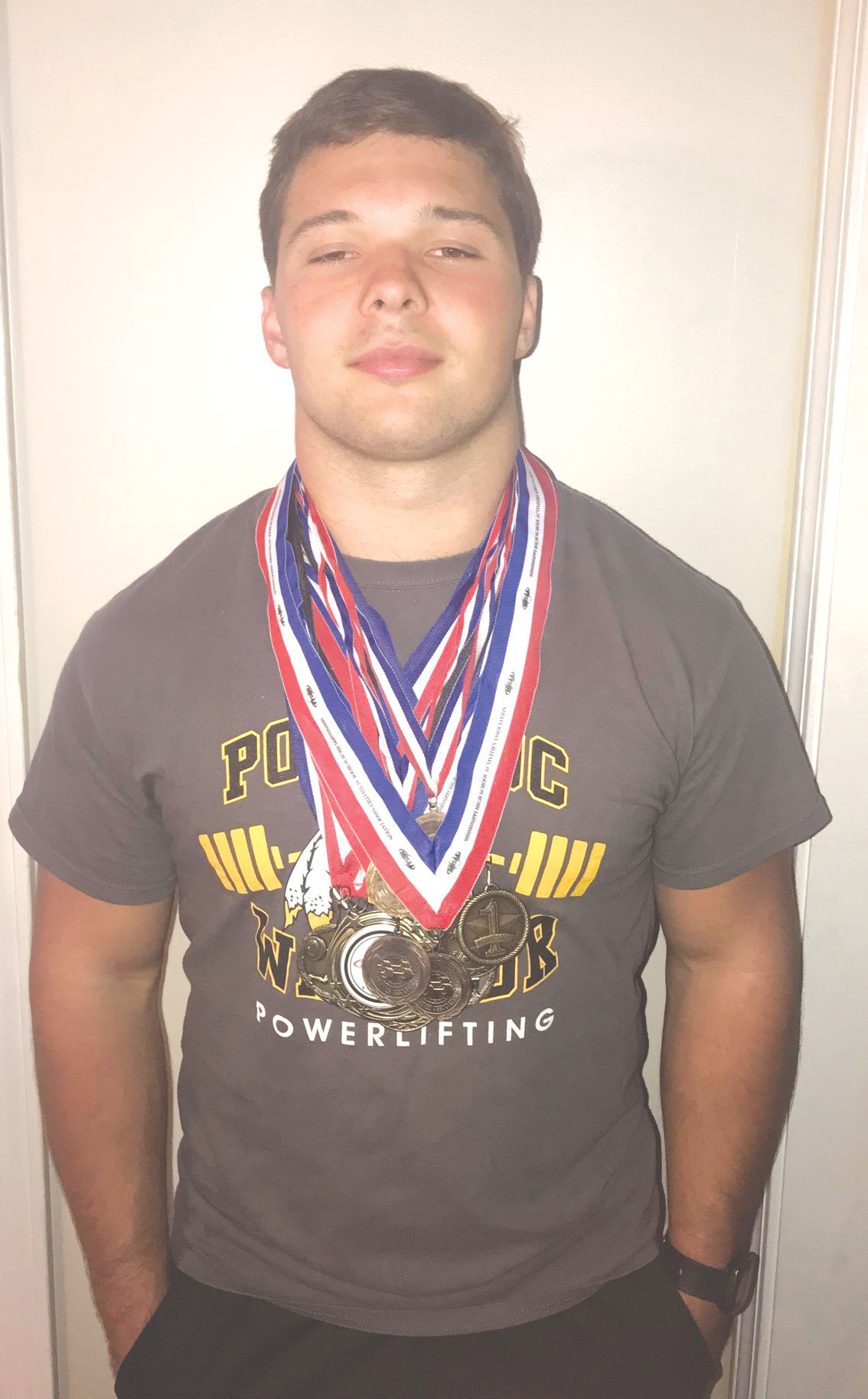 Harmon poses for a picture with his numerous powerlifting championship medals.

Harmon poses for a picture with his numerous powerlifting championship medals.

Gabe Harmon will be remembered as one of the most special athletes to come through Pontotoc High School.

Anyone who attended Warrior football games over the past four seasons is very familiar with Harmon, who was long recognized as one of the top tailbacks in the area.

In the Warriors' final game of the 2018 season against Louisville, Harmon, who was already the school's all-time leading rusher, surpassed the 5,000 mark in career rushing yardage.

Harmon wrapped up his career with 5,003 yards on 738 carries, an impressive 6.8 yards per tote. He averaged 104.2 yards per game and had 27 100-yard rushing performances. He recorded 57 touchdowns on the ground.

Harmon burst onto the scene as a freshman in 2015 with 823 yards on 133 carries. The following season his numbers exploded with 1,974 yards and 21 TDs on 285 carries. In 2017 he missed the team's first five games recovering from an injury but still amassed 637 yards on 96 carries, and last fall he finished out his prep career with 224 carries for 1,569 yards and 21 TDs. He also was an effective receiver out of the backfield, picking up key yards and first downs. He notched 64 career receptions for 528 yards.

Despite his 5'7 stature, Harmon ran with determination and relentlessness. Many times the crowd has roared as he plowed through, bounced off and spun past would-be tacklers.

"He was a tenacious runner," Warriors head football coach Jeff Carter said. "He got a lot of yards after first contact."

Harmon was also a great teammate and leader, as he played as big part in the program's recent revival that has seen the Warriors win 36 games over the past three seasons.

"On the field all he ever did was just do things the right way and do it by example," coach Carter said. "He was a very unselfish player. He put in the extra time. A lot of kids don't realize how much time you have to put in and he did. Gabe is a great kid, great attitude, tough- just the kind of kid you want to coach."

As impressive as his career on the gridiron was, his powerlifting resume is perhaps even more so. In April Harmon capped off his prep career by winning his fourth consecutive individual state championship at 2019 MHSAA State Powerlifting Championships. Harmon's four state titles came in three different weight classes. He set a state bench press record of 315 pounds as a freshman in the 165-pound class and another state bench press record of 335 pounds in the 181-pound class as a junior. He also has many championship medals from regional and North Half competition.

Harmon has been a big contributor to the Warriors' program-wide success, as he was a part of four Class 4A championship teams.

"I talked to a lot of guys around the state who have been doing this (coaching powerlifting) a long time and I was not able to find any record of anyone winning four in a row," Pontotoc head powerlifting coach Marty Warren said.

"He's a kid that came to work every day regardless of how he felt. The end goal was the important thing, and whatever it took to get there that was what he was going to do. He inspired his teammates to get better just through his work ethic. He is not a very vocal kid, but the example that he set and the intensity he approached his workouts with, it rubbed off on the other guys.

"That's what allowed him to be able to win four state championships in a row. He came in every day and wanted to do to know, 'Coach, what do I need to do? What do you think everybody else in the state is doing? What were the numbers from last year? We would set down and look at it and we would say, I think this is what you need to win.' And that is what he went out and got."