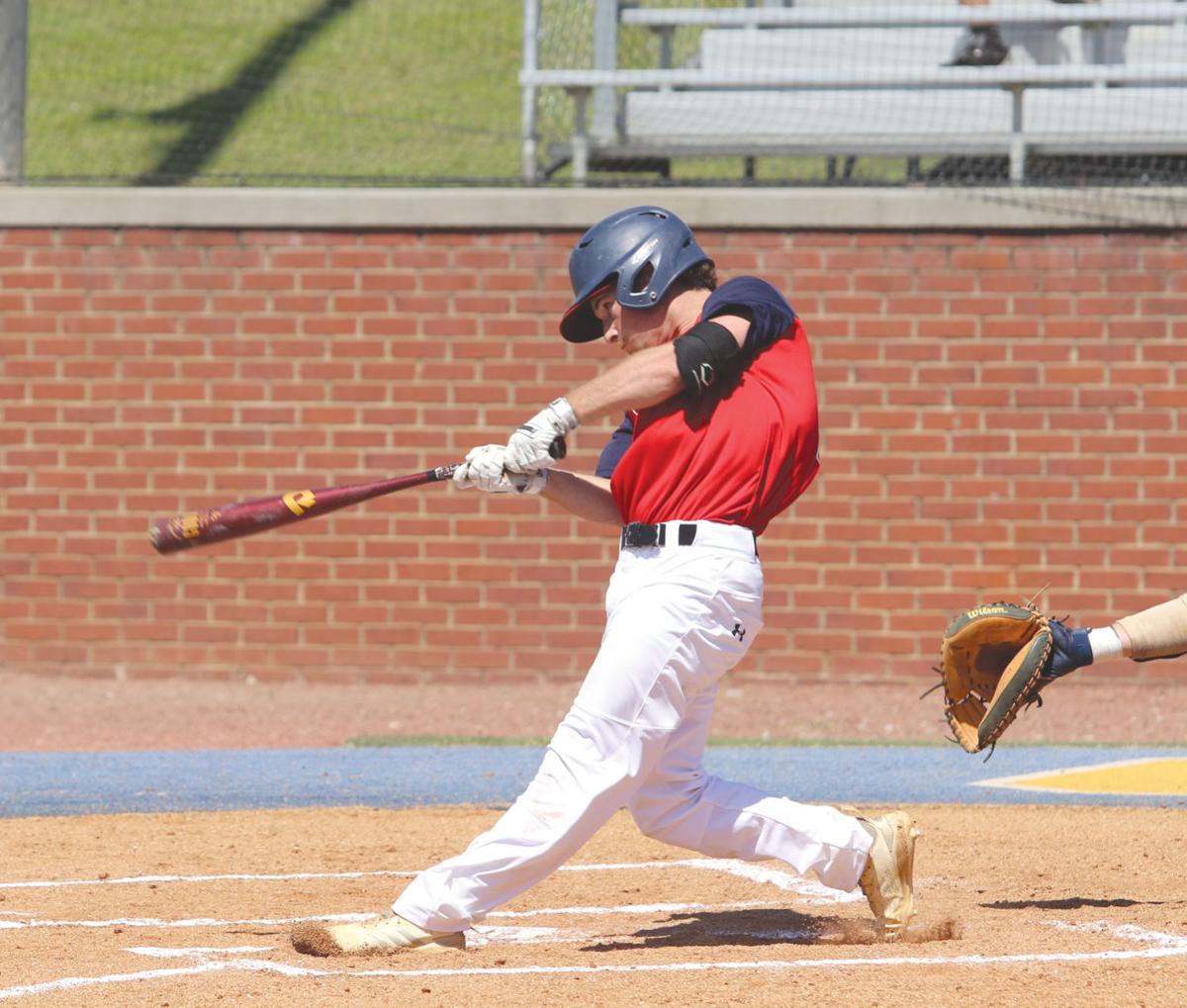 Sheffield Anthony had four hits in the North Mississippi Indians' two games Friday at the Tupelo Round Robin, including going 3-4 with two doubles and 2 RBI in an 11-10 win over the Tupelo 49ers. 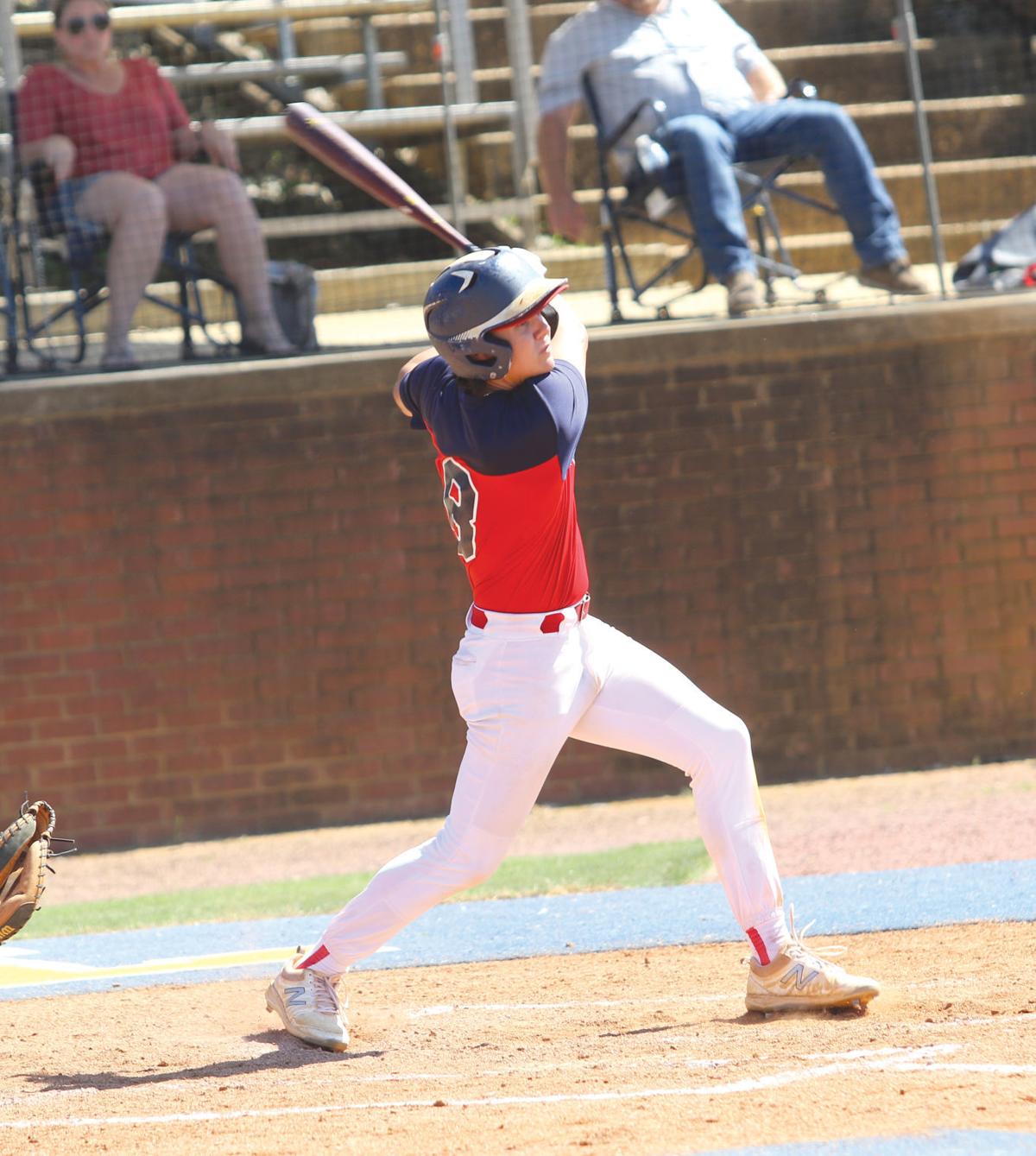 Ethan Carnes lines one of his two hits against Tuscaloosa last Friday. Carnes also drove in a run in a 2-1 Indians' win.

Sheffield Anthony had four hits in the North Mississippi Indians' two games Friday at the Tupelo Round Robin, including going 3-4 with two doubles and 2 RBI in an 11-10 win over the Tupelo 49ers.

Ethan Carnes lines one of his two hits against Tuscaloosa last Friday. Carnes also drove in a run in a 2-1 Indians' win.

TUPELO- The North Mississippi Indians had a good weekend at the Tupelo Round Robin, winning two of their three games.

On Friday afternoon they took on Tuscaloosa, Alabama and came away with a hard-fought 2-1 victory in eight innings.

Tuscaloosa got the lead off runner on base in the 1st inning, but Indians starter Jon Robert Carnes recorded three straight outs with a ground out, fielder's choice and strikeout.

Boo Robertson legged out an infield single in the bottom of the frame, advancing to third on a steal and subsequent error, but the Indians were unable to score.

There was no score until the 3rd. Lucas Cartwright led off the Indians' half of the inning with a single up the middle. He then advanced to second base on an errant pick off attempt and to third base on a wild pitch. Ethan Carnes (Pontotoc High School) then drove him home with a base hit to give the Indians a 1-0 lead. They ended up loading the bases on a pair of walks, but could not push any more runs across.

In the 4th the Indians' Adam Atkins dropped down a bunt single and Cartwright walked, ultimately getting to second and third on a double steal, but Tuscaloosa was able to escape with no further damage.

Luke Willard entered on the mound in the 5th. Carnes had worked four scoreless innings, allowing two hits and striking out five. Tuscaloosa got a runner on via a walk and got him to third base after a sacrifice bunt and a ground out, but Willard got a ground ball to end the threat.

Tuscaloosa finally did break onto the scoreboard in the top of the 6th with a one-out RBI single, but Willard stranded two additional base runners to keep the contest tied 1-1.

In the top of the 7th Tuscaloosa got a lead off single. Pitcher Ty Hester fielded a subsequent sacrifice bunt and tossed to Willard, now at first base, for the out, who fired a strike across the diamond to third for a double play. A ground out then ended the frame.

Cartwright had a infield single with one out in the bottom of the 7th. Ethan Carnes then drove a pitch into left-center for a double to put runners on second and third. The Indians looked to have a good chance at winning when pinch-hitter Chris Fleming (South Pontotoc) drove a fly ball to left field, but Cartwright was thrown out at the plate for an inning-ending double play.

Tuscaloosa got a pair of runners on in their half of the 8th, but a fielder's choice ground ball to third base ended the threat. Sheffield Anthony (North Pontotoc) singled to start things off for the Indians in the bottom of the 8th. Willard reached on a one-out walk to put the winning run in scoring position, and Gage Harrington delivered the walk-off 2-1 victory with a RBI base hit.

Later that night against Tupelo the Indians fell behind 2-0 in the 1st inning. They scored on a error in the 2nd. In the 3rd Anthony doubled and came home on a sacrifice fly by Harrington to tie the game 2-2. The 49ers went ahead 4-2 with a pair of runs in the bottom of the 3rd before the Indians answered again in the 4th. Cartwright singled and Carnes doubled before Kyle Church drove in Cartwright with a single. Anthony tied the game 4-4 with a base hit to plate Carnes, and Harrington gave the Indians a 5-4 lead with an RBI fielder's choice ground ball.

The contest continued to go back and forth, as Tupelo regained the lead 7-5 with a trio of runs in the bottom of the 4th. The Indians tied it again 7-7 in the 5th, scoring on a two-run double by Anthony. Tupelo plated a run in the 6th to take a 8-7 lead. The Indians took control with four runs in the top of the 7th. Robertson singled to bring home a run, with a second go-ahead run scoring on an error by the outfielder. Reed Scheley also had a two-run single to make it 11-8. The 49ers plated two in the bottom of the 7th and put the tying run at second base, but Cartwright, on the mound, got a ground out to close out the win.

On Saturday morning the Indians fell to the Pontotoc Red Sox 4-0.