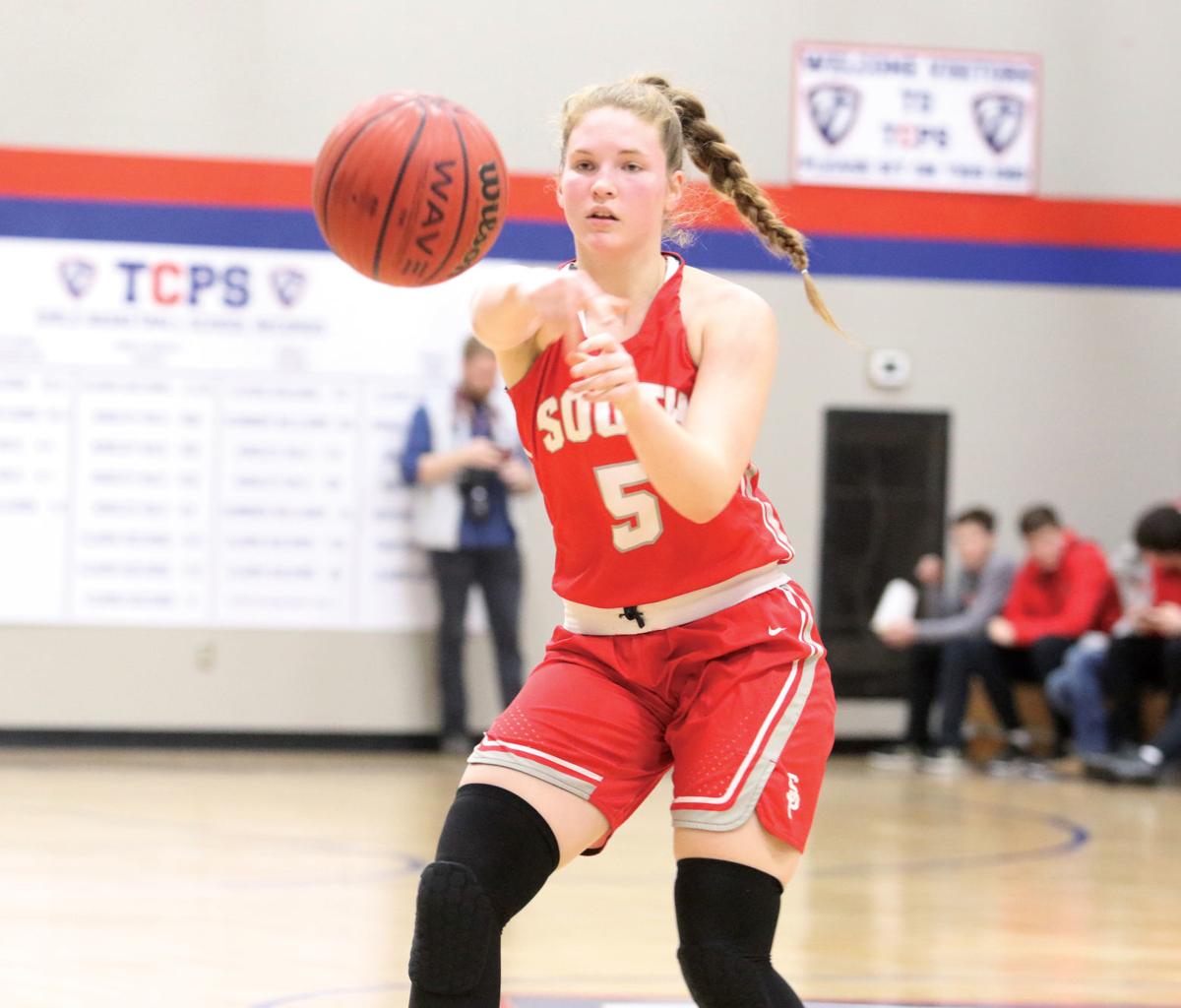 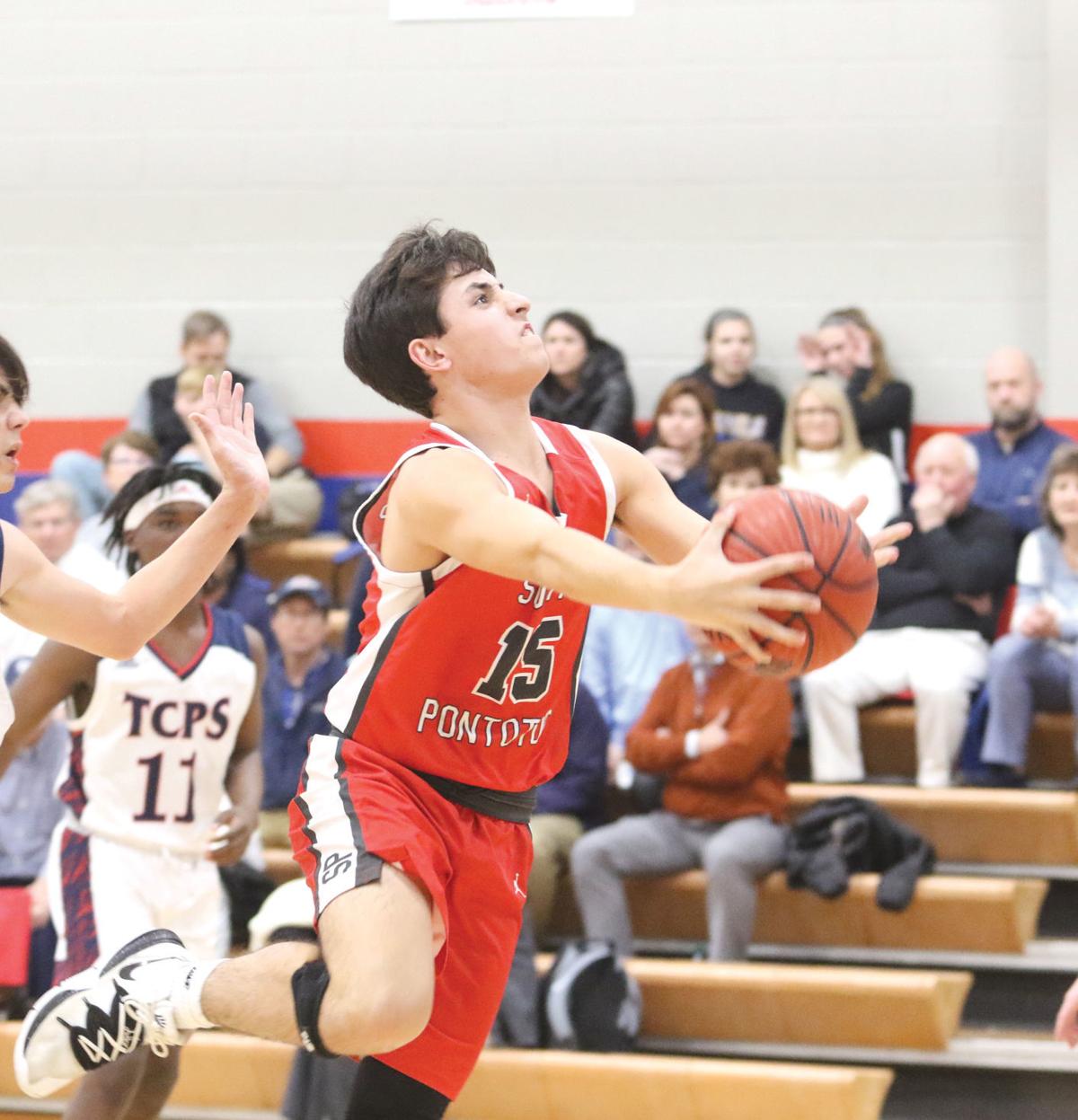 The Cougars' Trace Ash goes up for a layup on a drive against the Eagles.

The Cougars' Trace Ash goes up for a layup on a drive against the Eagles.

The Lady Eagles dug themselves a hole early, as South took a 10-5 lead into the second period.

TCPS’s Allison Hanby feed the ball into Ainsley Hale for a bucket early in the second to bring the Lady Eagles closer at 10-7.

South’s Sydney Brazil answered by getting the ball inside to Maisy Canerdy for a score, and Anna Catherine Roye nailed a 3-pointer. Rebekah Pilcher’s basket plus a foul shot gave the Lady Cougars a 20-14 halftime lead.

Lauren Graff put back an offensive rebound for a score midway through the third period, keeping TCPS close at 25-21.

Roye took a nice charge on a Lady Eagles scoring attempt near the end of the period, as South held their four-point advantage.

TCPS surged ahead in the fourth. Savannah Adair put back an offensive rebound, Millie Speed hit a 3-pointer to tie the game, and Hale put in a layup to push the Lady Eagles out front 28-26.

South prevailed down the stretch, as buckets from Canerdy and Brazil evened the score at 30. Clutch free throws from Pilcher and a feed from Brazil to Roye for a score iced the game.

The Cougar boys played hard but came up just short against the Eagles, falling 59-56.

A 3-pointer from Caden Wood helped TCPS open a 5-point lead to start the first period. Will Reeves then tied the game for South with consecutive scores.

Jackson Mills nailed a 3-pointer and followed with an offensive putback for the Eagles, but Trace Ash answered with a 3-pointer of his own to pull the Cougars to within 13-12 as the first period expired.

Mills scored to help the Eagles extend their lead early in the second, but the Cougars kept pace with buckets from Alex Collins, Reeves and Stroud Mills.

Jayden Hooker fed a nice pass in to Mickelle Dawson to keep South close, but a pair of scores from the Eagles’ Breenen Parker helped TCPS carry a 26-23 lead into halftime.

Crisp scoring from Wood helped TCPS surge to a 10-point lead in the third period. South’s Reeves answered with a pair of buckets, including an offensive putback. With a 3-pointer from Clayton Murphree and a basket from Mills the Cougars clawed their way to a tie at 38-all.

A nifty crossover dribble and basket from Mills, followed by a 3-pointer, and a coast-to-coast score from Collins gave South a 47-42 advantage going into the fourth.

After TCPS surged head again, a 3-pointer from Hooker and a late score by Reeves helped tie the game at 55-all. However, a pair of steals and layups by the Eagles’ JP Yates helped TCPS gain the win.