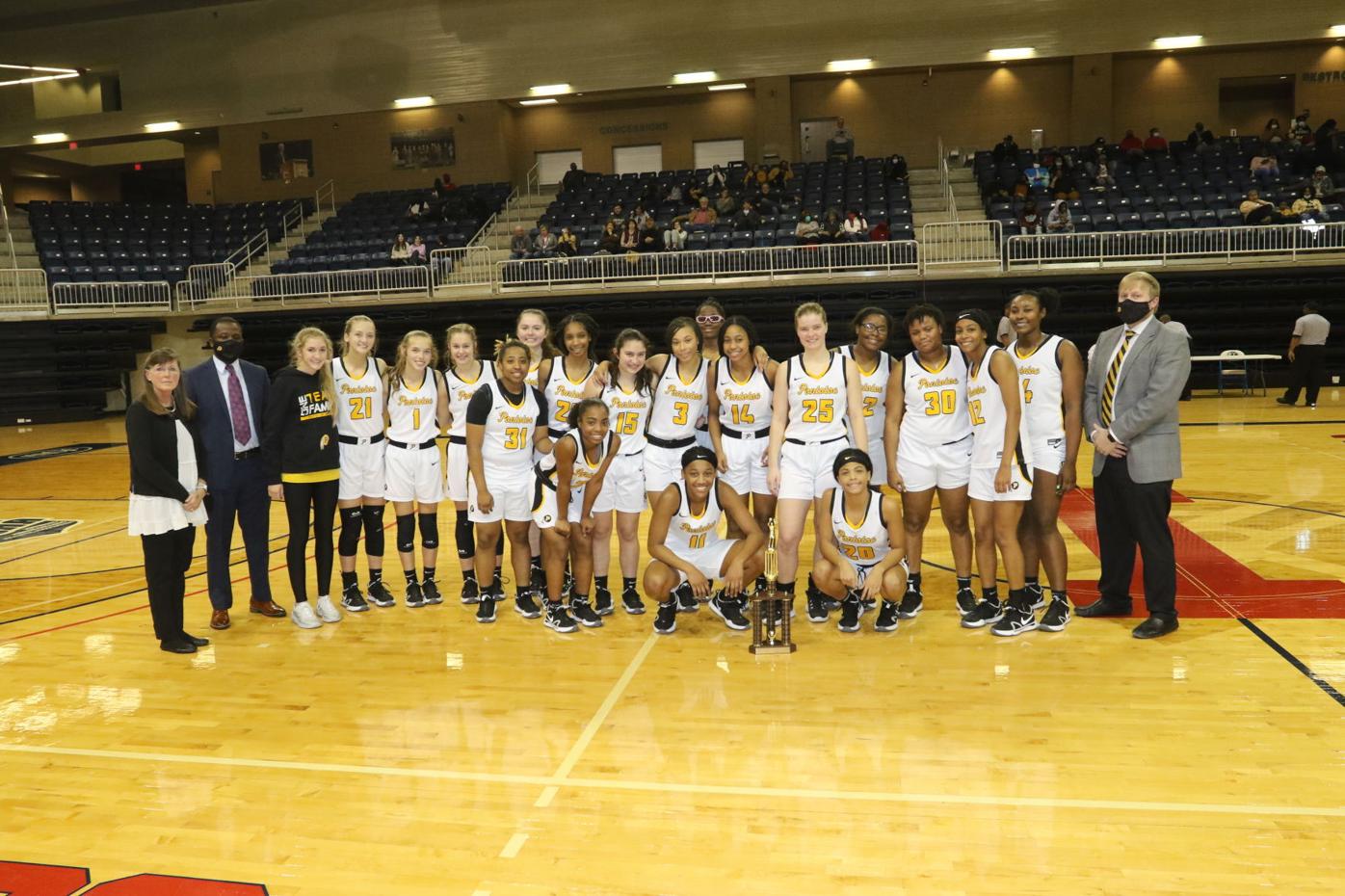 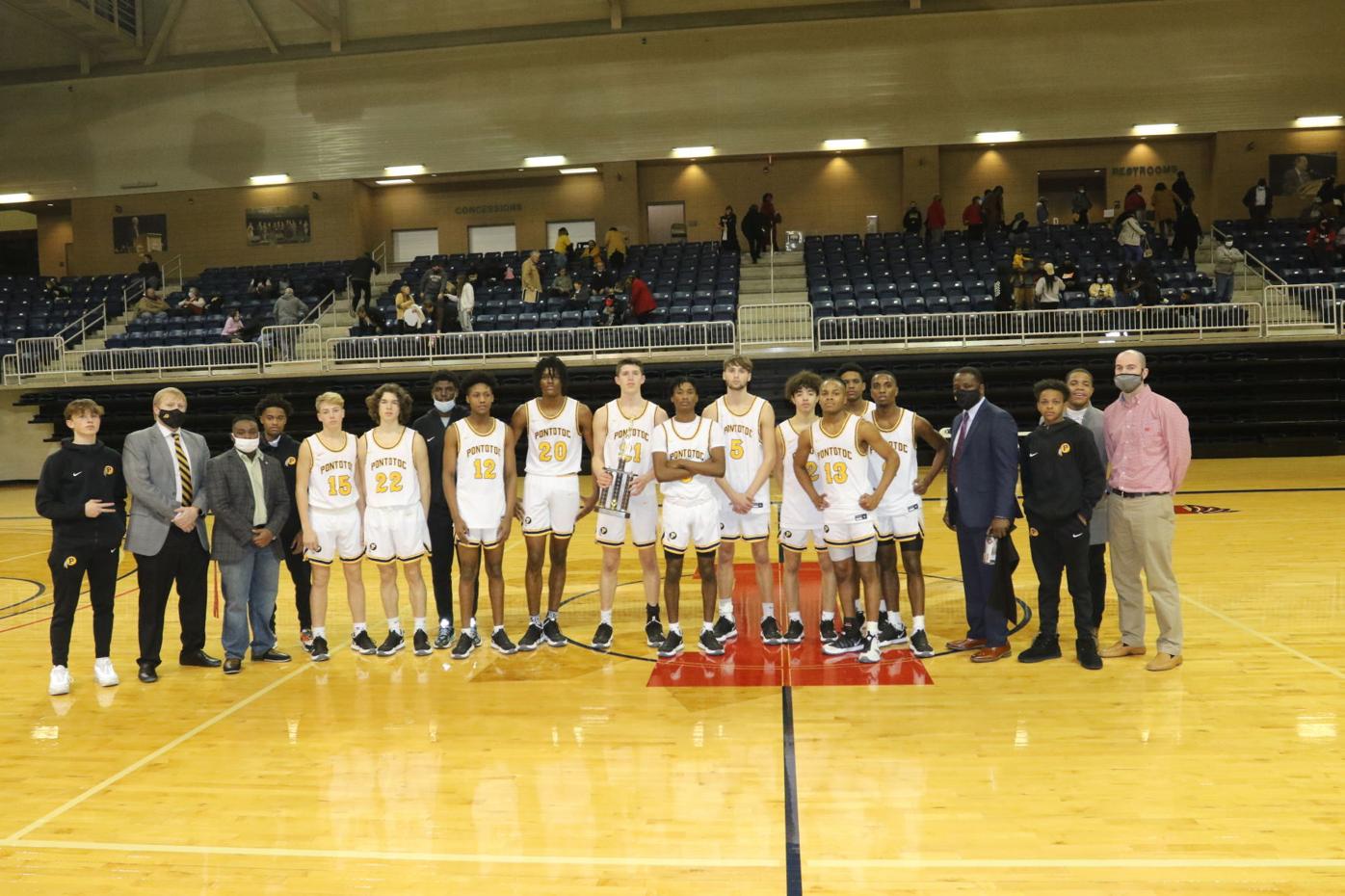 The Pontotoc boys basketball team celebrates after capturing the Division 2-4A Tournament title on Friday.

The Pontotoc boys basketball team celebrates after capturing the Division 2-4A Tournament title on Friday.

FULTON- The Pontotoc Lady Warriors (26-4) won their third straight Division 2-4A Tournament title on Friday with a 60-49 victory over Shannon.

PHS was finally able to get some separation over the Lady Raiders as the game wore on, leading by double digits almost the entire second half.

"Shannon did a good job of taking us out of some of the stuff we like to do, and they played us pretty physical," said Pontotoc girls head coach Kyle Heard. "At times we didn't respond well to that and we had a foul trouble early, but once we all got on the same page I thought we executed."

Allie Beckley hit a 3-pointer and Samya Brooks had a putback in the early going for Pontotoc before Shannon's Christani Johnson hit a 3-pointer. Soon after a Shannon backcourt turnover led to a good scoring chance, and Brooks crashed the offensive glass again for a bucket, drawing a foul and converting the 3-point play for an 8-5 Pontotoc advantage.

Sky Vaughn drove and dished to Brooks under the basket for a layup, and Brooks scored again on a pump fake move and short shot in the lane. Angela Middleton found Vaughn open for a layup on a fast break, and Brooks continued her strong quarter with another bucket for a 16-5 lead. The Lady Warriors led 16-8 at the end of one.

Vaughn and Beckley scored for Pontotoc early in the second, but the Lady Red Raiders went on a 10-2 run, with the Lady Warriors' lone basket coming from Riley Stanford, to cut it to 22-20 with 2:09 remaining in the half.

Shannon tied things up 22-22 with a layup from Aubrei Bogan, but Makayla Boyd answered with a 3-pointer for Pontotoc. Beckley drove the baseline and passed to Stanford for a layup with 25 seconds left. Beckley was fouled on a halfcourt shot at the buzzer, hitting two of three free throws for a 29-22 halftime lead.

The Lady Warriors began to open up a comfortable lead in the third quarter. Vaughn drove to the hoop and scored, drawing a foul and hitting the ensuing free throw to make it 38-26. Brooks grabbed a steal, leading to two Middleton free throws. A transition layup by Brooks extended the lead to 42-26. Shannon chipped away at the lead, pulling within 11 with a minute to go in the quarter. After a couple of PHS free throws, Vaughn scored on driving layup with three seconds to go to extend the lead to 50-35.

Shannon would get within 55-45 with 2:40 to go in the game, but Samya Brooks scored Pontotoc's final five points to close out the win.

Brooks paced the Lady Warriors with 20 points, while Vaughn finished with 17 points.

After a first-round bye Pontotoc advanced to the title game with a 64-22 victory over Mooreville last Wednesday.

Pontotoc will host Yazoo City in the first round of the 4A playoffs.

The Pontotoc boys (25-3) also claimed a 3-peat, as they gradually pulled away in the second half on their way to 70-53 victory over the Red Raiders in the Division 2-4A Tournament Boys Championship Game.

It was neck and neck the entire first half. Shannon kept a slight lead most of the first quarter, with the Warriors pulling ahead 11-10 on a transition layup by Jaylen Edwards in the closing seconds. Dajerious Scott, Joe Haze Austin, Rock Robinson and Gavin Brinker also had baskets for Pontotoc.

Robinson opened the second quarter with a 3-point play, but Shannon answered with an 8-0 run. Jackson Harris' jumper put the Red Raiders up 18-14 at the 5:08 mark. Brinker was fouled and made two free throws for the Warriors. After a Shannon turnover, Austin caught a long outlet and spun away from a defender for an easy layup to tie it up 18-18.

The Red Raiders answered again with a basket, and Scott drove to the rim for two for PHS. Devin Hodges rolled in a shot to put Shannon up 22-20 before the Warriors closed out the half with three straight baskets. After a missed 3-pointer, Robinson skied for a one-handed offensive rebound and went back up for two. Pontotoc continued to crash the offensive glass. Brinker scored on a putback to give the Warriors a 24-22 lead with 1:08 left in the half, and Robinson cleaned up another miss with a tip in at the buzzer to make it 26-22.

Scott hit four free throws to open the second half for Pontotoc, and they soon opened up a 10-point lead. Tyson Blanch scored on a layup for the Red Raiders before Robinson knocked down a pair of free throws for the Warriors. Pontotoc kept between an eight and 11-point lead until Hodges scored to cut it to 44-38 at the 1:15 mark of the third. Robinson rebounded his own miss and dished to Brinker for a layup, and after a Shannon bucket Brinker drove to the basket for two with six seconds remaining to make it 48-40.

Pontotoc kept a steady lead early in the fourth. Robinson drained a 3-pointer to put the Warriors up 53-44. The Red Raiders pulled within six after a 3-pointer by Harris with 5:08 to play, but the Warriors went on big run that started when J.J. Washington scored on a putback and drew a foul, converting the old-fashioned three at the charity stripe. Brinker drilled a tough 3-pointer that swelled the lead to 65-49 before Shannon's Hodges stopped the bleeding with a basket. Brinker made a free throw before adding another basket, and Washington scored a final time with 42 seconds left, extending the decisive run to 15-2.

"I believe just getting up and down the floor and bringing the tempo up on defense (in the second half) kind of tired them out a little, but they (Shannon) still fought till the end," said Pontotoc head coach Rolley Tipler.

"On the defensive glass we were sending four every single time, and I think that was kind of contagious and everybody started hitting the offensive glass the same way,” Tipler said.

After a first round bye, the Warriors advanced to the championship with a 86-38 victory over Caledonia on Wednesday.

Pontotoc now has a path to play at home until the state semifinals. They will take on Greenwood in the opening round of the 4A playoffs.

"If we just win now, we get three home games," coach Tipler said. "You can’t ask for anything better than that, especially when we haven’t lost a home game this year. I think that will take a little edge off of that playoff-pressure."

Ask the Master Gardener for Feb 24

Winter's last whiteness will turn into spring's thaw - I hope