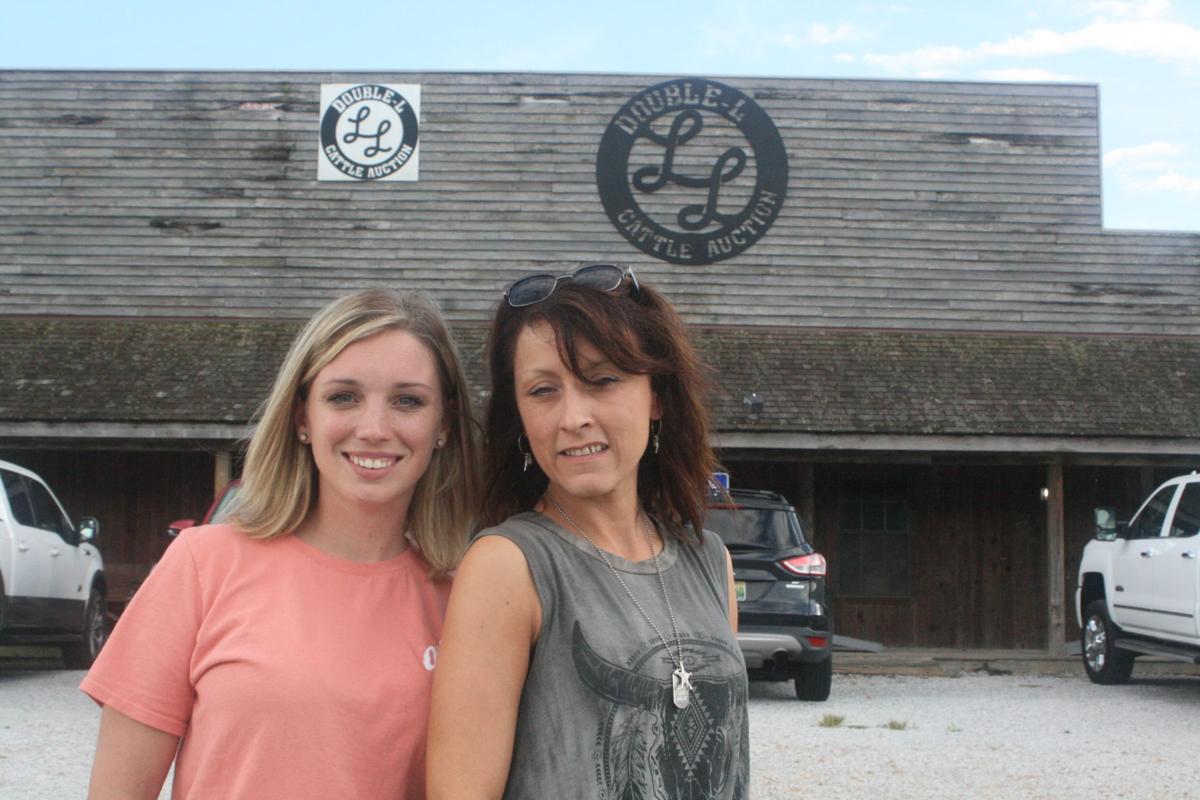 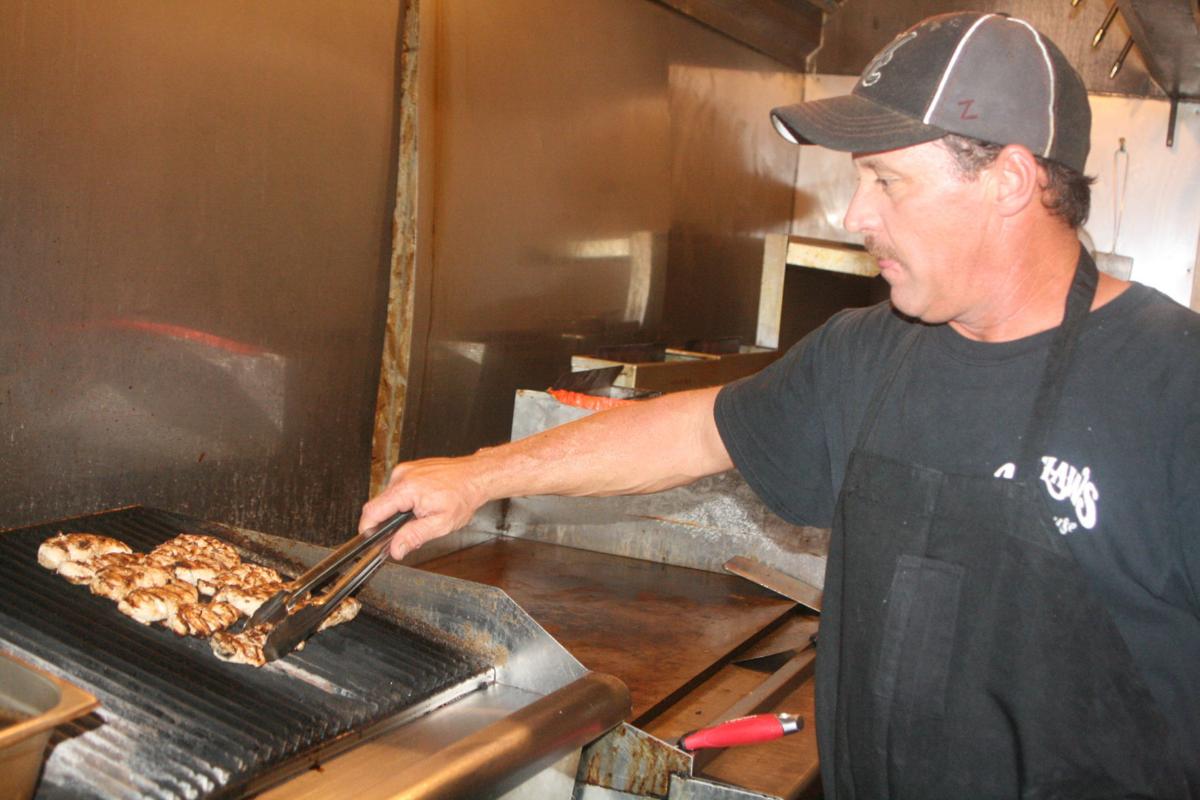 Flat-top cook and co-owner Jason Helzer turns sizzling chicken breasts at Outlaws Steakhouse at the beginning of the dinner rush. 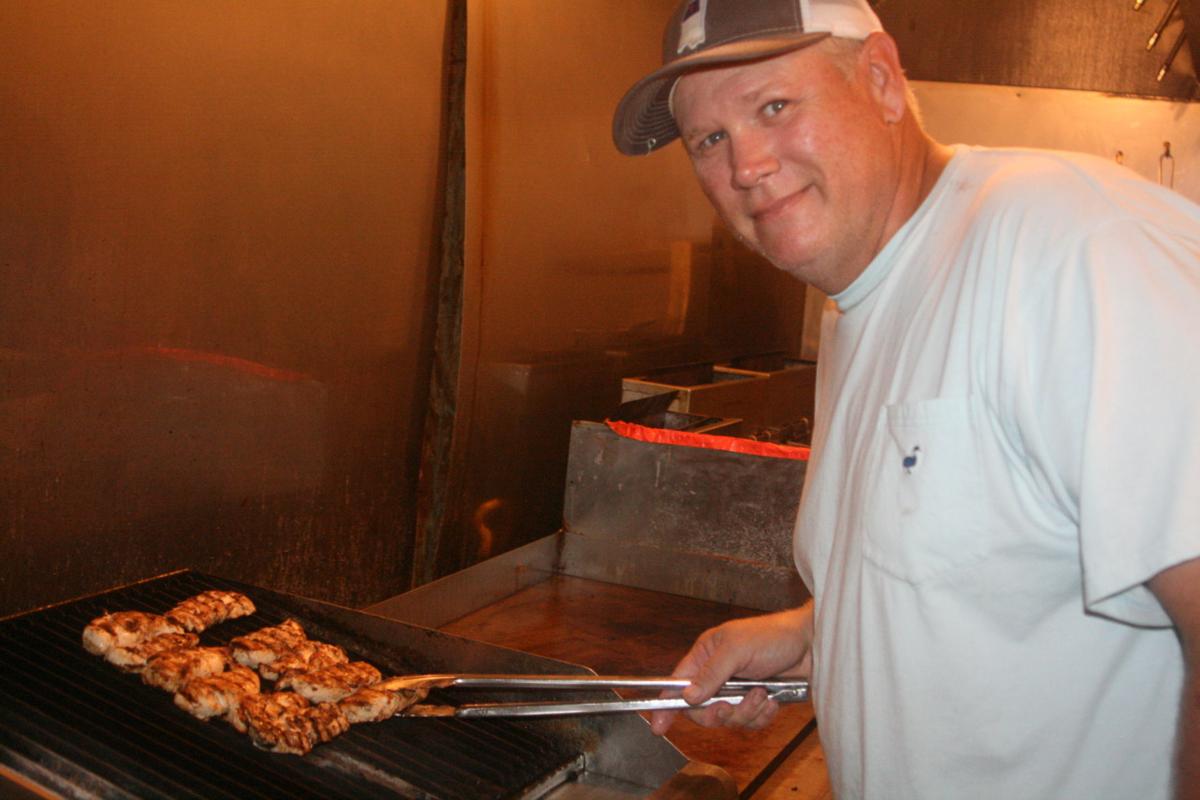 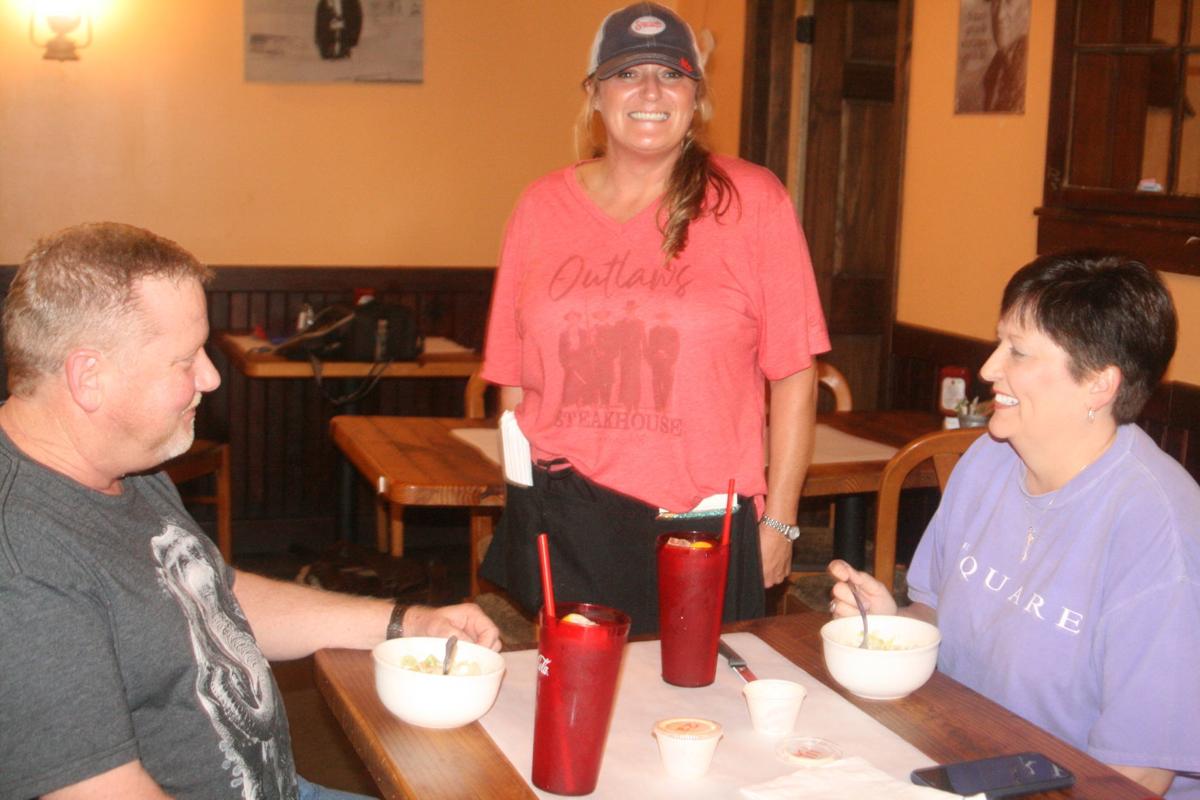 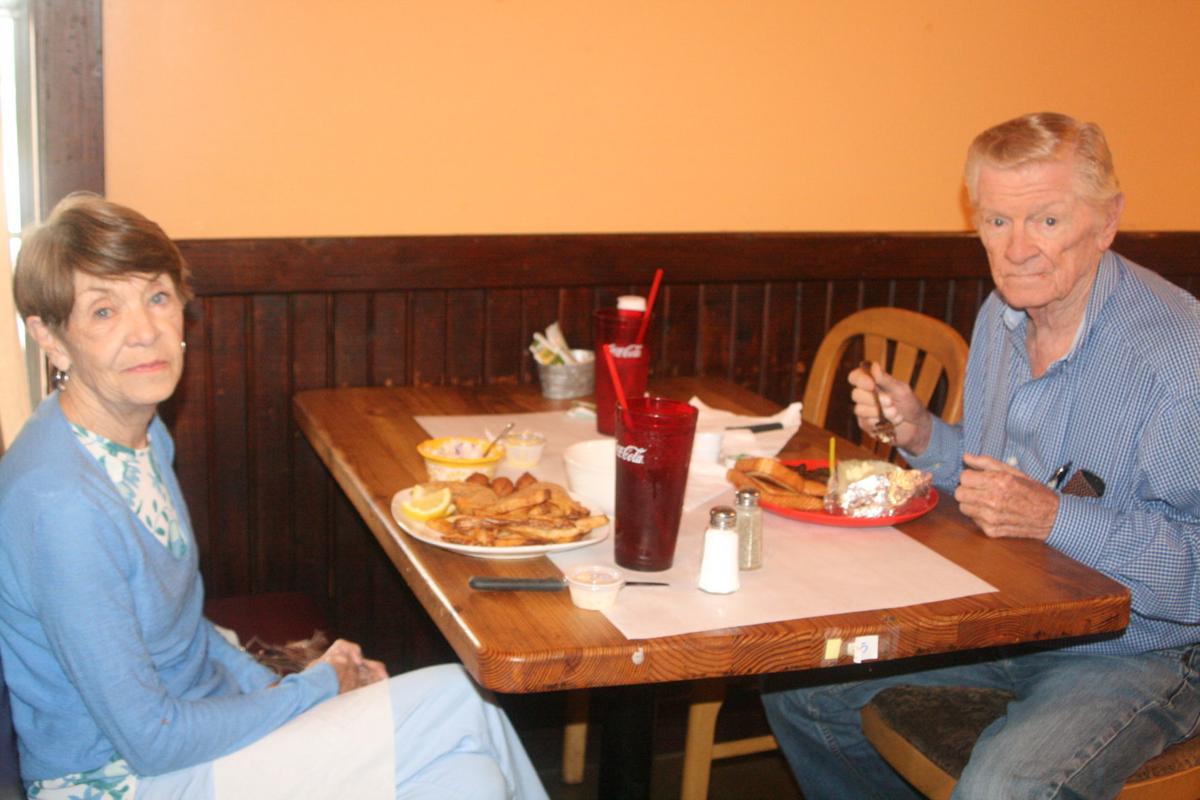 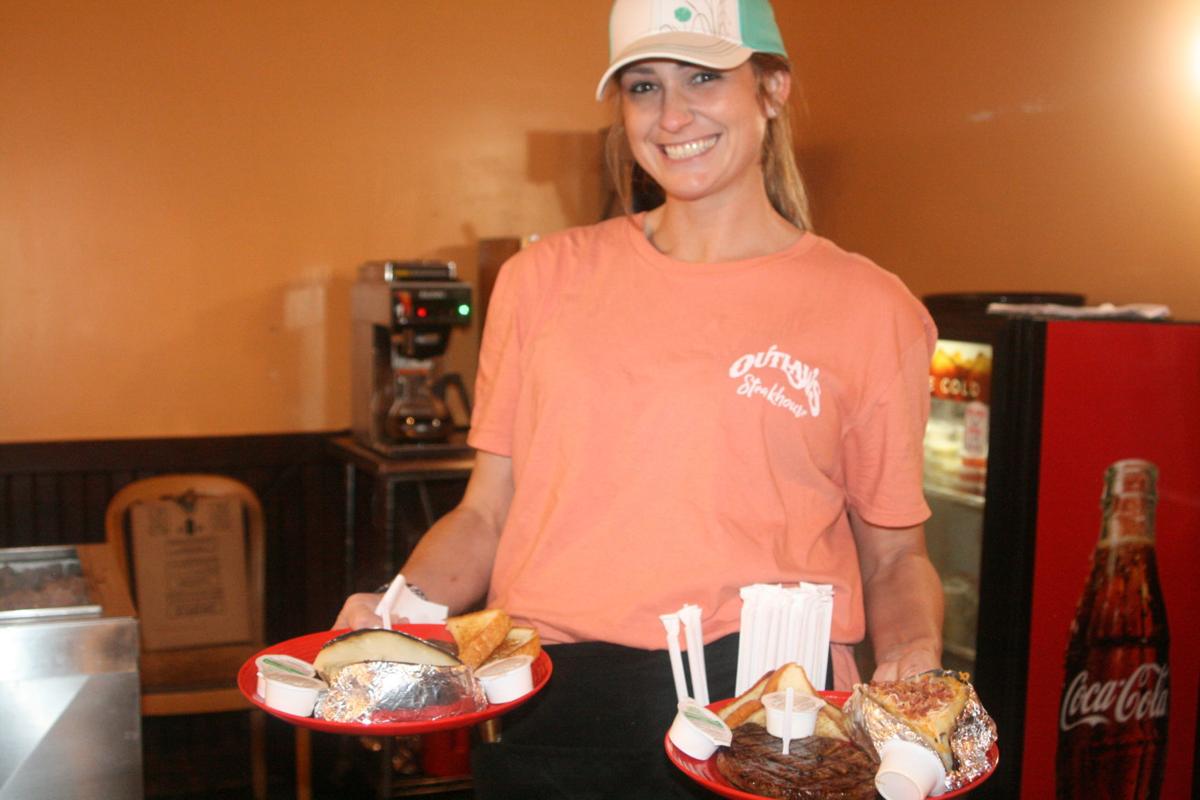 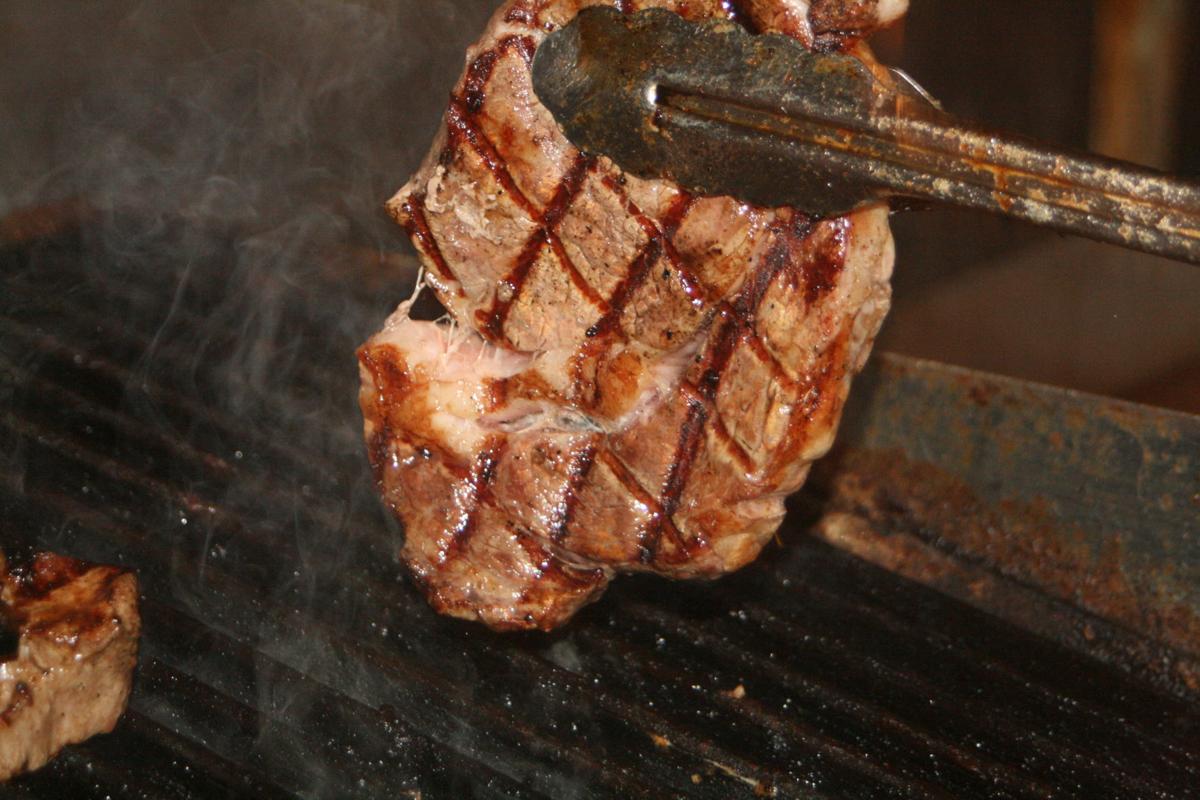 A 14-ounce ribeye has beutiful grill marks and sizzles on the screaming hot grill as Tommy Thweatt gives it a turn. 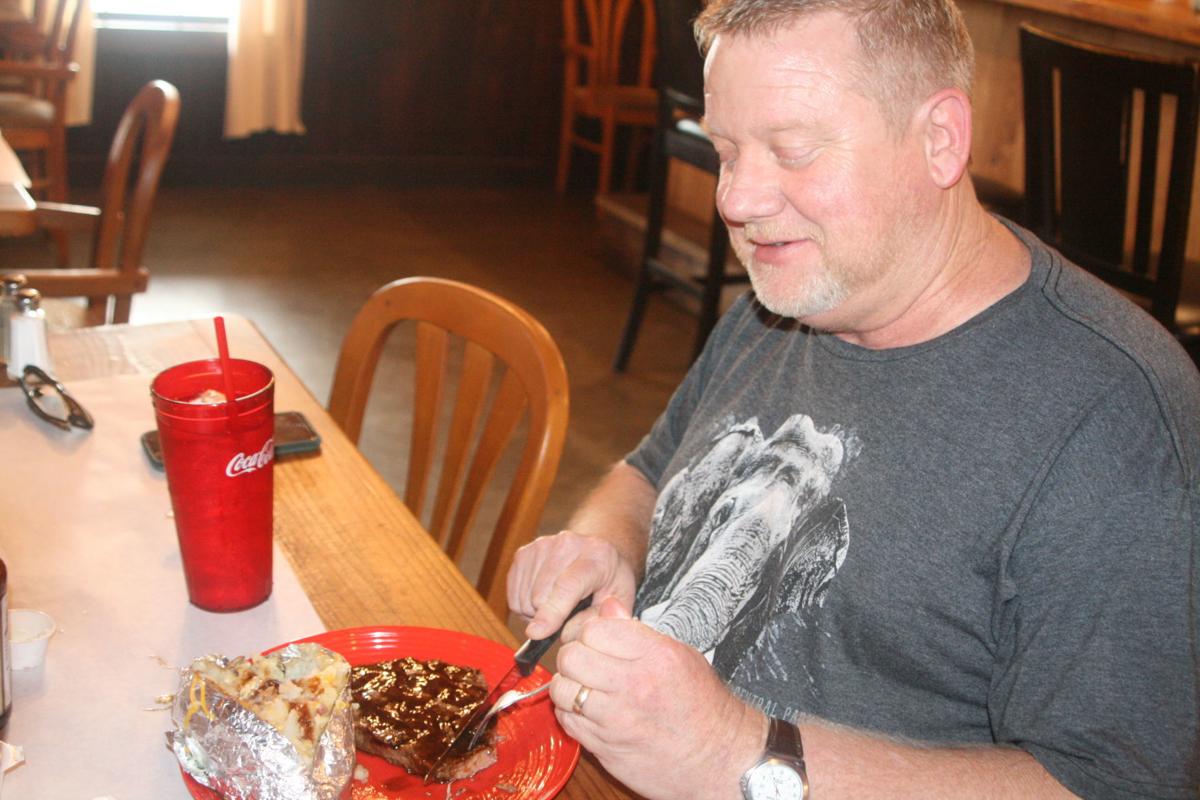 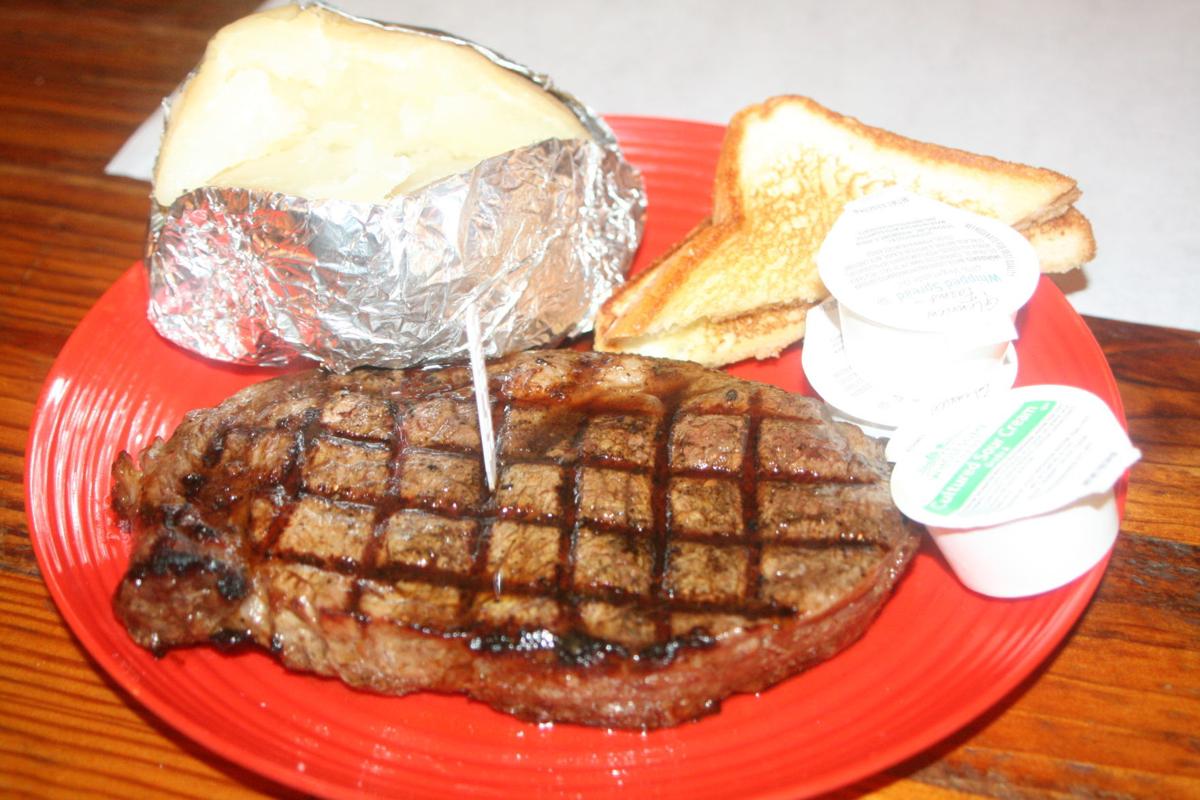 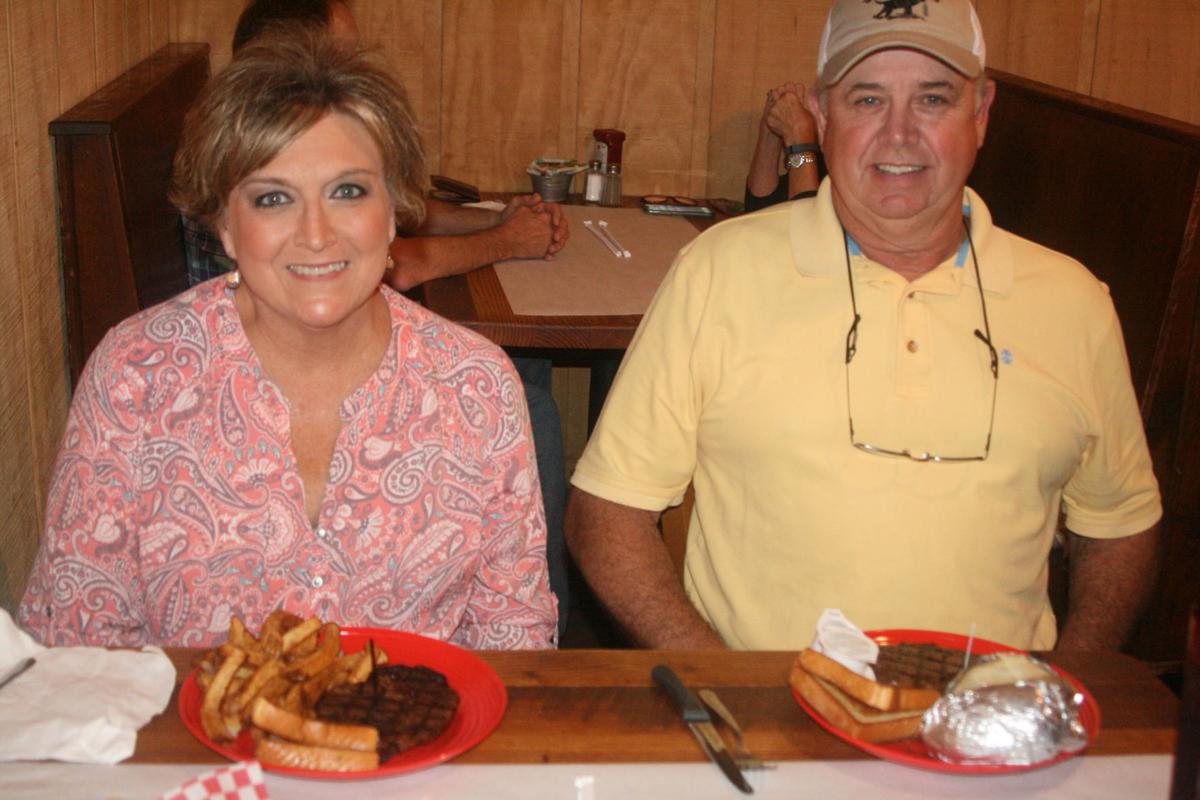 Harold and Bobbye Clark get ready to dig in on some grill-seared steaks at Outlaws.

Flat-top cook and co-owner Jason Helzer turns sizzling chicken breasts at Outlaws Steakhouse at the beginning of the dinner rush.

A 14-ounce ribeye has beutiful grill marks and sizzles on the screaming hot grill as Tommy Thweatt gives it a turn.

Harold and Bobbye Clark get ready to dig in on some grill-seared steaks at Outlaws.

The scorching heat from the gray-hot grill made the backsplash seem to undulate, rising in translucent waves, and the cool, raw steaks hissed and sizzled, giving off succulent, white smoke.

“We marinate our steaks, and cook them at a really high temperature, to sear in flavor,” said Tommy Thweatt, the head grill man at Outlaws Steakhouse. He lifted a cast-iron weight off beautifully grill-marked chicken breasts with his right hand, as he put on the steaks with his left.

The dinner rush was starting. Jonathan Hawkins dropped a basket of sweet-potato fries into the rolling-hot oil. Jason Helzer flipped a row of thick, brightly buttered Texas toast on the flattop.

Two of the first steaks out of the kitchen went to Frank and Karen Tuttle.

“We’ve had steaks from here to New York, and you can’t beat this place,” said Frank, as he cut into his medium, eight-ounce ribeye. “It’s cooked point-on perfect,” he said.

“This is our standing date, every Saturday night,” said Karen, who also had the eight-ounce, medium.

Outlaws co-owner Terra Collums worked the front of the house, greeting diners with a bright smile and asking if everything was ok. She touched Billy Rodgers on the shoulder as he raved about the food and the service.

“I’ll go ahead and say it, this place is better than any in Tupelo or anywhere close, you can quote me on that,” said Rodgers, as he dined with his wife, Rhonda.

Collums and co-owner Tonia Garner bought the restaurant, which used to be called The Auction Block, last year. As did many of the staff, Collums and Garner worked for the previous owners.

“We loved working here, loved the atmosphere, the location, the customers, the staff—we’re like family, here, and we couldn’t let it go,” said Garner, whose husband helps anchor the kitchen staff.

Several people advised Collums and Garner not to go into business together, warning it might ruin their friendship, but things are working out even better than they expected.

“It’s kind of like a marriage,” said Collums, smiling, as she nudged her partner with her shoulder, sitting in the office they share, behind the front register.

“She’s the sweet one, and I’m the bossy one,” said Garner, pretending to scowl at Collums.

As Garner put it, Collums usually serves as the face of the ownership team-- part maître d, part greeter, part server--and Garner makes sure the nuts-and-bolts stay well-oiled and everything runs smoothly behind the scenes.

That’s the way they both like it, Collums said, and it works.

The ambiance at Outlaws is rugged and cowboy. Pictures of John Wayne hang all around, and the walls are unpainted wood, evocative of a Wild West saloon.

“We got the name and theme from the Western movie Tombstone, which we both love,” said Collums.

About 45 minutes into the dinner rush, server Jessica Durdin emerged from the kitchen, carrying a plate of fried catfish and fixings in one hand, and a thick ribeye, with a pink, plastic marker, reading “medium rare,” in the other.

“I love the atmosphere, here,” said Durdin, who also makes many of the deserts on the menu, including strawberry and chocolate Ding-Dong cakes, as well as Italian cream, Oreo, and German chocolate. “It’s strictly casual here, not too fancy. I get to know a lot of people, and I love the girls I work with.”

“Folks love our fish almost as much as much as our steaks, and it comes from farms in the Mississippi Delta,” Collums said.

Whole fish, fillets, and shrimp are favorites for those who like a little surf with their turf.

Steakhouse staples, like onion rings, are good for starters, as are guilty pleasure appetizers like fried pickles and pepper jack cheese. Asian spring rolls—cabbage, carrots, and pork, wrapped in a crispy shell, and served with chili sauce—offer an exotic alternative to whet the appetite.

The ribeye comes in 8 and 14-ounces. The New York strip weighs in at a meaty 10 ounces, and the most tender, gold standard of steaks, the filet mignon, is six ounces of seared, luscious, cut-with-a-fork heaven.

“The service is great, and you get your food quickly,” said Bobbye. “We keep coming back because the food and service are just excellent.”

Brenda Lewis was dining with the Clarks. She had the New York strip, medium.

“I highly recommend this place, it’s just the best,” said Lewis, as she cut into her steak, and smiled.

Chicken and steak kabobs, beef tips and rice, and steak sandwiches frequently appear on the menu, but Mississippi, farm-raised fish, and thick, succulent steaks are the bread and butter at Outlaws.

“Food and family, that’s what we’re based on,” said Collums. She referenced Jeremiah 29: 11, which reads: “For I know the plans I have for you, declares the Lord. Plans to prosper and not to harm you. Plans to give you hope and a future.”

“We wanted to stand out, and be a little different,” said Collums. The atmosphere is laid back, we’re family owned, and we love good foot and good people.”