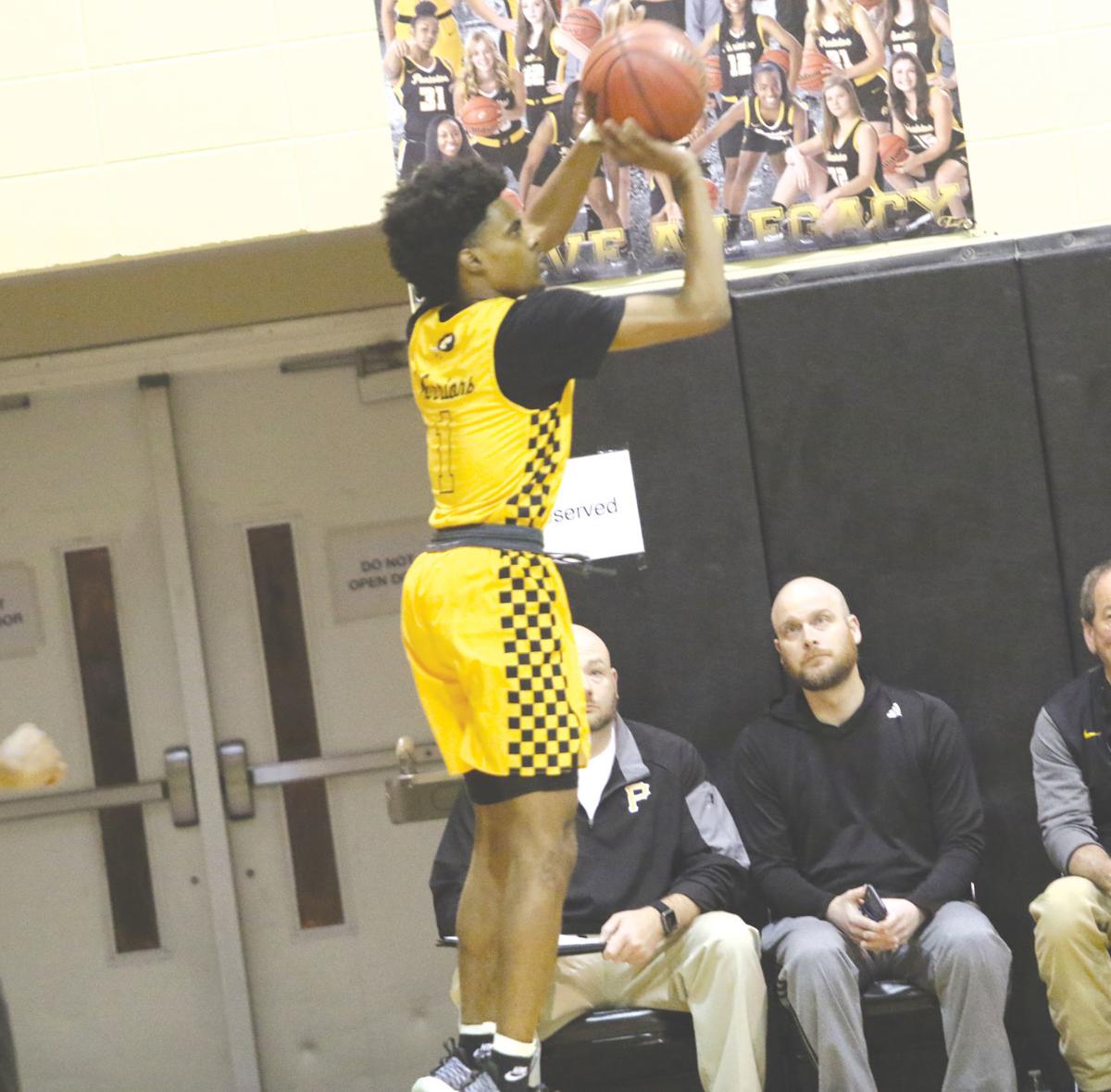 Pontotoc's Manoj Nickson puts up a 3-point attempt in the finale of Saturday's Tangle on the Trail shootout. Nickson and the Warriors came up just short against Holly Springs after a second half rally. 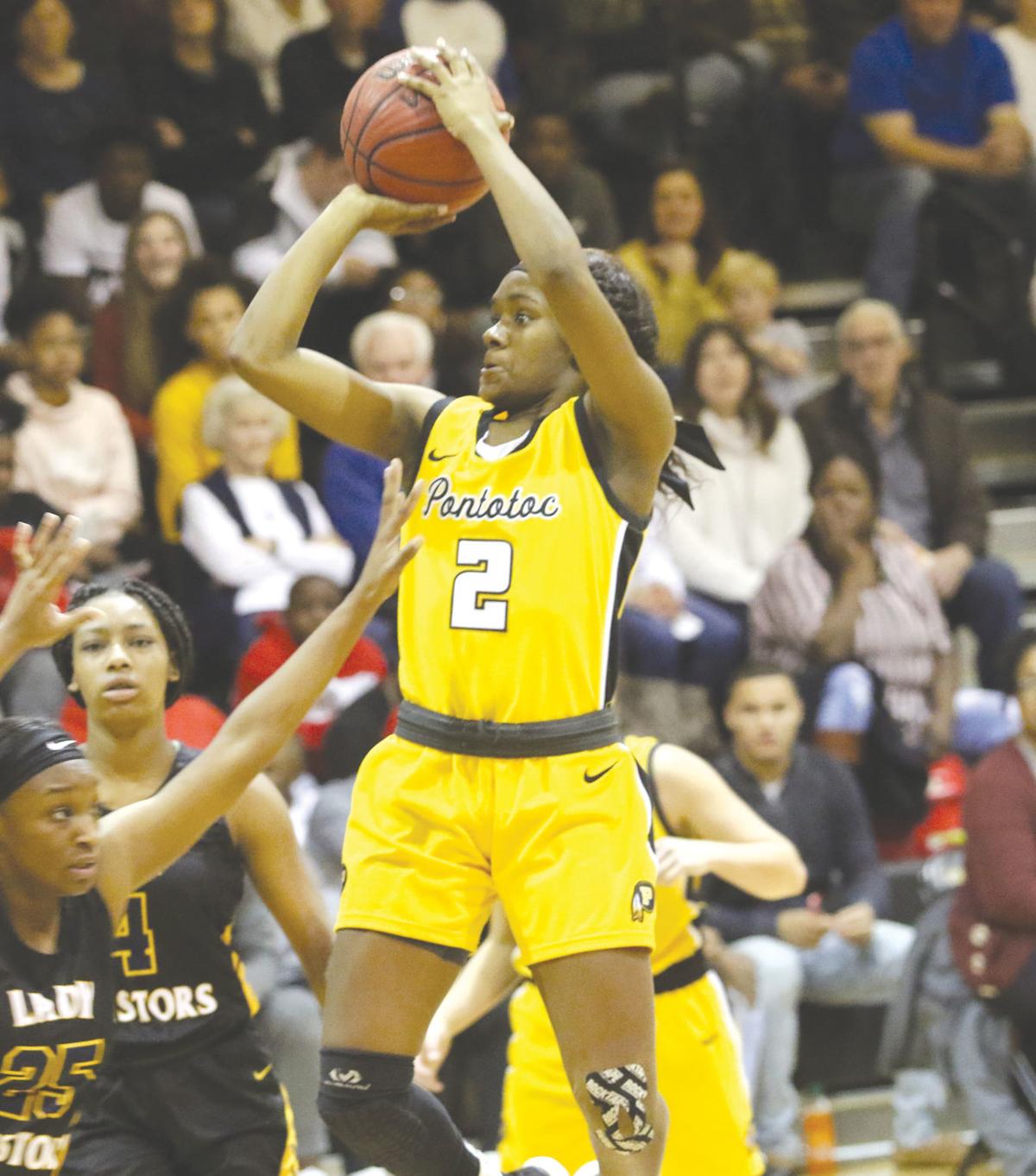 Pontotoc's Manoj Nickson puts up a 3-point attempt in the finale of Saturday's Tangle on the Trail shootout. Nickson and the Warriors came up just short against Holly Springs after a second half rally.

PONTOTOC- The Pontotoc Rotary Club put on another highly successful Tangle on the Trail basketball shootout on Saturday at Pontotoc High School.

The gym was packed to the gills all day, as top boys and girls hoops powers squared off in the 9-game slate.

The day started with the Belmont girls barely squeaking by three-time defending Class 1A champion Pine Grove and ended with the hometown Pontotoc Warrior boys facing off against Holly Springs.

Pontotoc (10-6)  faced a 14-point halftime deficit before rallying in the second half to put themselves in position to win against Holly Springs (13-4). After PHS tied the game up, Holly Springs' Ded'drick Faulkner knocked down a jump shot with 1.7 seconds left to put the Hawks up 52-50. Holly Springs added two free throws by Dylan King to hold on for a 54-50 victory.

It was a tight game at the end of the first quarter, with Holly Springs holding a slight 15-13 advantage after a layup by Derek Fountain in the final seconds. However, the second period was all Hawks. They outscored Pontotoc 17-5 to take a 32-18 lead into halftime.

Joe Haze Austin started the second half with a basket for Pontotoc. Austin Nickson and Caleb Hobson also scored to cut the deficit to 34-24. Holly Springs ran the lead back out to 14, 39-25, before the Warriors slowly gained some momentum in the final minutes of the third. Rock Robinson got a nice roll on a short turnaround. Hobson then added two points, and Gavin Brinker knocked down a runner. Brinker got to the free throw line and hit both shots, and Hobson got to the rim for a layup to make it 43-35 at the end of three quarters.

A bucket from Robinson and a putback and later a free throw from Hobson allowed the Warriors to cut the Holly Springs lead to 48-44. Hobson returned to the foul line and made both shots to make it 48-46. The Hawks responded with a basket from Tyhem Reaves, but a Holly Springs turnover led to an underhanded layup by Joe Haze Austin to pull Pontotoc within 50-48.

Holly Springs' Fountain missed the front end of a one-in-one with 38 seconds to play. Austin was then foul and connected with both free throws for the Warriors to tie the game at 50-50 with 14.4 seconds remaining. Holly Spring's Faulkner would hit the game-winner on the ensuing trip downcourt.

The Pontotoc Lady Warriors (13-3) faced off with the defending Class 5A champions in the final girls game of the day. PHS struggled to match offensive prowess with the visiting Lady Conquistadors, falling 58-43.

Early on Pontotoc’s Jadyn Spears drove the length of the floor and dished to Sky Vaughn for a deuce. Amber McCoy then snapped a pass to a driving DeeDee Shephard for two. Spears found Samya Brooks in the lane for another layup.

A jumper by Olive Branch’s Rhema Pegues, and a steal and layup by Endya Buford, put the Lady Conquistadors ahead 17-10 going into the second period.

A pair of free throws by Brooks, a nice drive and layup by Angela Middleton, and a bullseye 3-pointer by Sloan Sansing off an outlet pass from McCoy pulled the women of the tribe to within five points, 23-18, with just over four minutes to play before halftime.

Buckets from Olive Branch’s Nadia Gillespie, and Brynea Eason stretched the Lady Dors’ lead to 30-19 heading into the break.

Pontotoc found some offensive fire early in the third, with putbacks from Vaughn and Brooks, followed by 3-pointers from Sansing and Shephard, but strong play from Olive Branch’s Buford, and a 3-pointer from Crystianna Eason prevented the Lady Warriors from mounting a strong comeback.

Olive Branch led 50-32 at the end of three periods.

The Lady Warriors showed fight early in the fourth period. Shephard sank a 3-pointer, Allie Beckley drove and dished to Brooks for a score, and Vaughn excited the crowd with a steal and layup, but Olive Branch held on for the win.