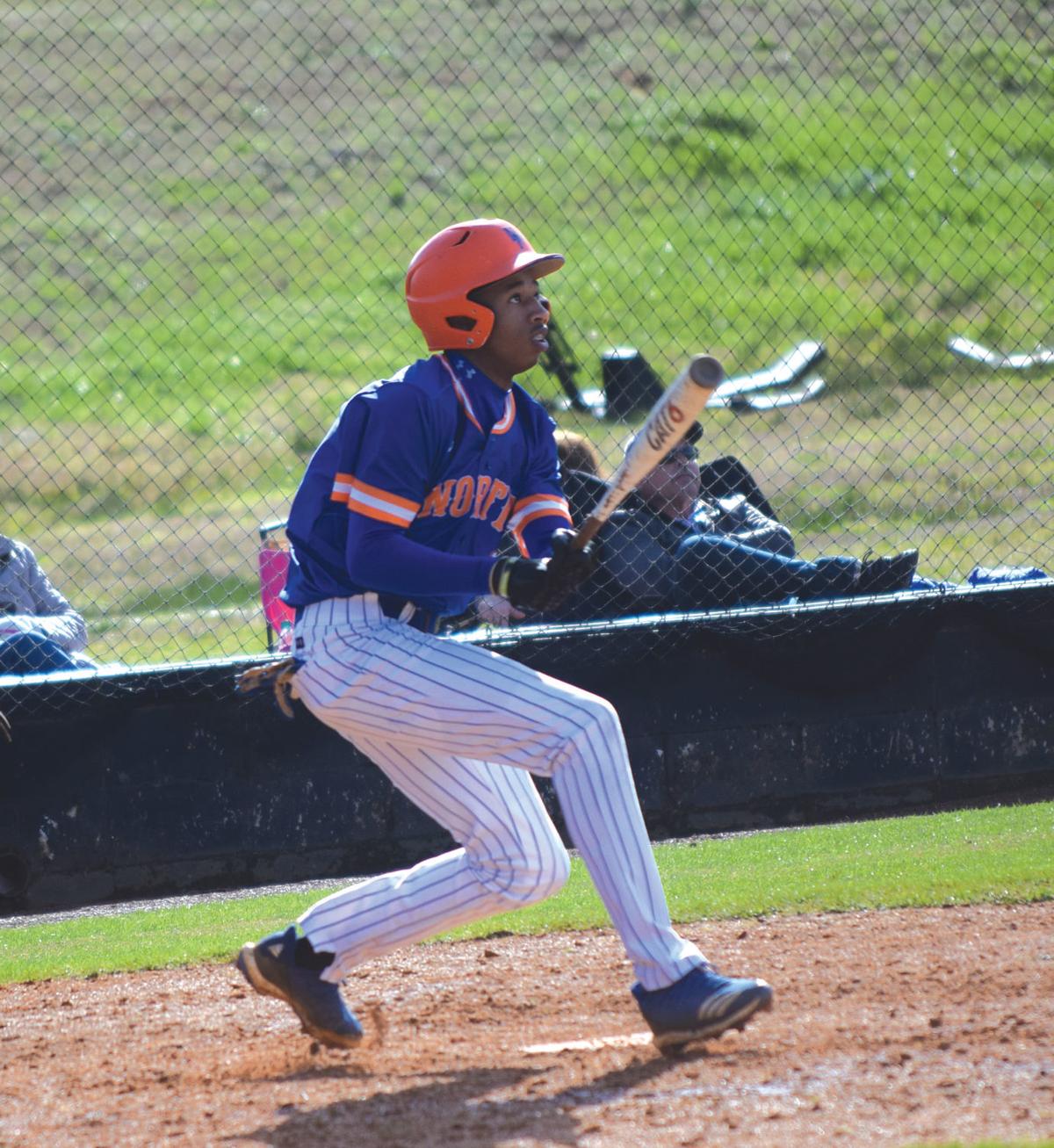 Ty Roberson watches his solo home run leave the yard in the sixth inning on Saturday. Roberson went 2-4 at the plate, while also pitching three innings of scoreless relief. 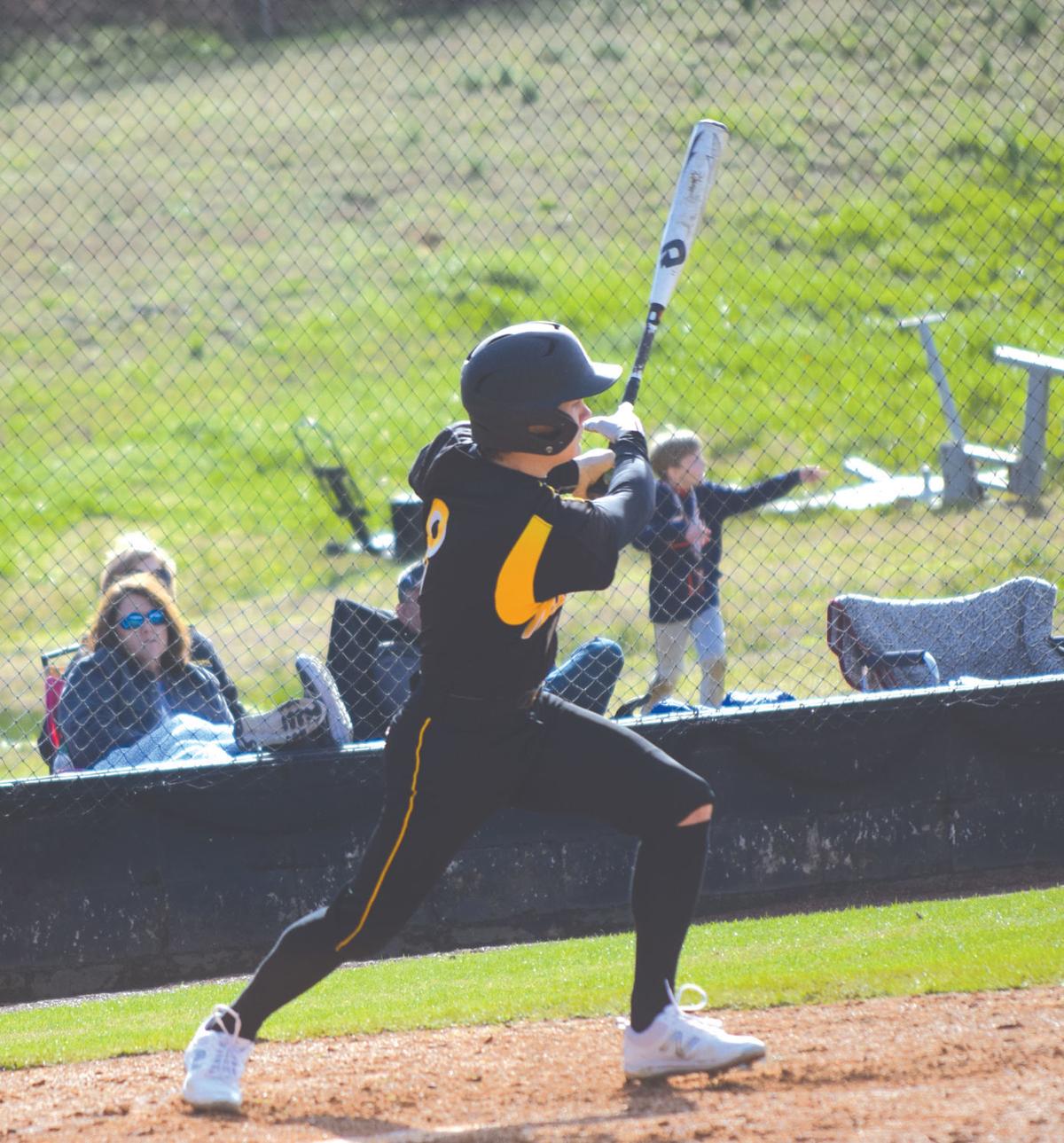 Ty Roberson watches his solo home run leave the yard in the sixth inning on Saturday. Roberson went 2-4 at the plate, while also pitching three innings of scoreless relief.

PONTOTOC- Pontotoc and North Pontotoc opened the 2020 season with a rivalry matchup in the Hollow on Saturday. In the end the Vikings, who won the 3A state championship in 2019, held off the Warriors for a 6-4 win.

"I'm just proud of the way our guys competed," said North head coach Chad Anthony. "We've got a lot of new guys at a bunch of new spots, but they have been playing, have been part of our program, and know how to compete. They just made plays, made some big pitches, made some routine plays, and we got a few hits when we needed to. We played well today for day one."

The Vikings got on the board in the top of the first. Kaden Wilson drew a lead-off walk and scored on a foul territory fly ball from Ty Roberson.

Reed Emison led off the bottom of the second with a double for Pontotoc. Emison moved to third on a single by Walt Garner and scored on a ground out by Ethan Carnes to tie things up 1-1.

North Pontotoc took control in the top of the 3rd with a 3-run inning. After two outs to open the frame, Bo Howell was hit by a pitch. Howell advanced to second on a wild pitch and scored on a base hit by Drake Steele. Wes Steele followed with a single, and a misplayed fly ball off the bat of West Sutton allowed Drake Steele to score. Hunter Miles made it 4-1 when he brought in Wes Steele with a single to left field.

The Vikings added another run to go up 5-1 when Roberson scored on a wild pitch with two outs in the top of the 4th.

North's Hunter Miles reached on a walk in the top of the 5th and advanced to third on a pair of ground outs, but Warrior pitcher Jon Robert Carnes, who entered in relief in the 4th inning, got a strikeout to keep the deficit at 4.

The Warriors climbed back in the game in the bottom of the 5th. Miles Galloway led off the frame with a walk, and Carsen Dallas followed with a single. Ross Mathews drew a walk to load the bases, and Peeko Townsend was hit by a pitch to bring in a run.

With the bases loaded and no outs, Roberson entered on the mound in relief of James Clay McGregor for North. A passed ball allowed Dallas to score from third to make it 5-3, and Roberson got the first out of the inning with a strikeout. Reed Emison drove in Mathews with an RBI ground out to put another run on the board for the Warriors, but Roberson preserved a 5-4 lead for the Vikings when he got a ground out to end the inning, stranding the tying run at third base.

Roberson then stepped up in a big way at the plate. Leading off the top of the sixth, he launched a solo home run that landed beside the scoreboard in right center field to extend the lead to 6-4.

Pontotoc threatened again in the bottom of the sixth. Ethan Carnes singled and Galloway walked to put two runners on with one out, but again Roberson made big pitches to escape damage. He recorded a strikeout and fly out to keep the 2-run lead intact.

After North was held scoreless in the top of the seventh, Pontotoc's Brice Deaton smacked a one-out double to left field in the bottom half of the inning. However, that was all the Warriors could get. Roberson induced a fly out before ending the game with a strikeout.

"They both did a great of job of number one throwing strikes and number two of mixing up their pitches," Anthony said. "They kept a good-hitting lineup off balance for the most part I thought."