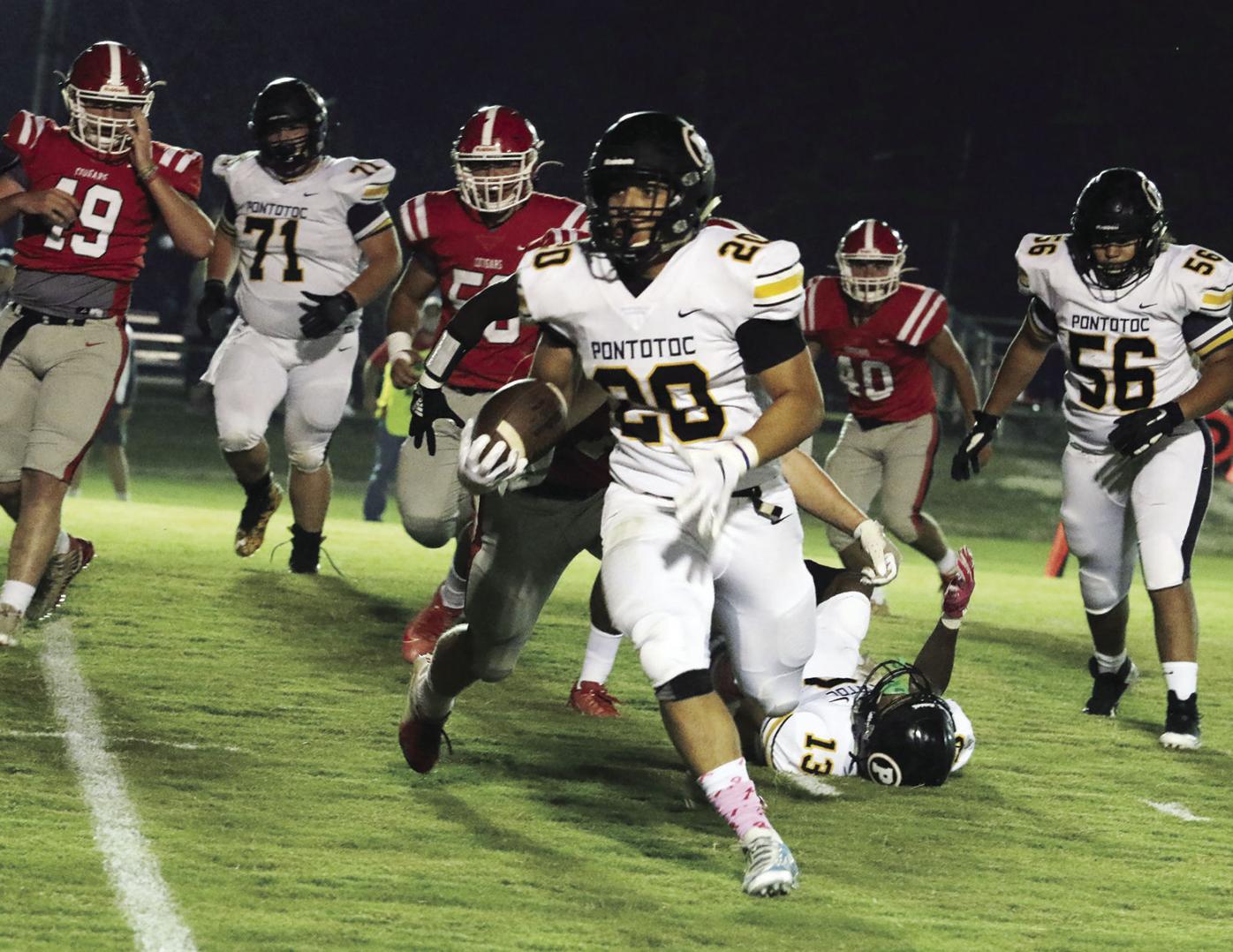 Warrior running back Jemarkus Whitfield carries the ball around the left edge for a big gain in Pontotoc's 36-29 win over county rival South Pontotoc on Friday. 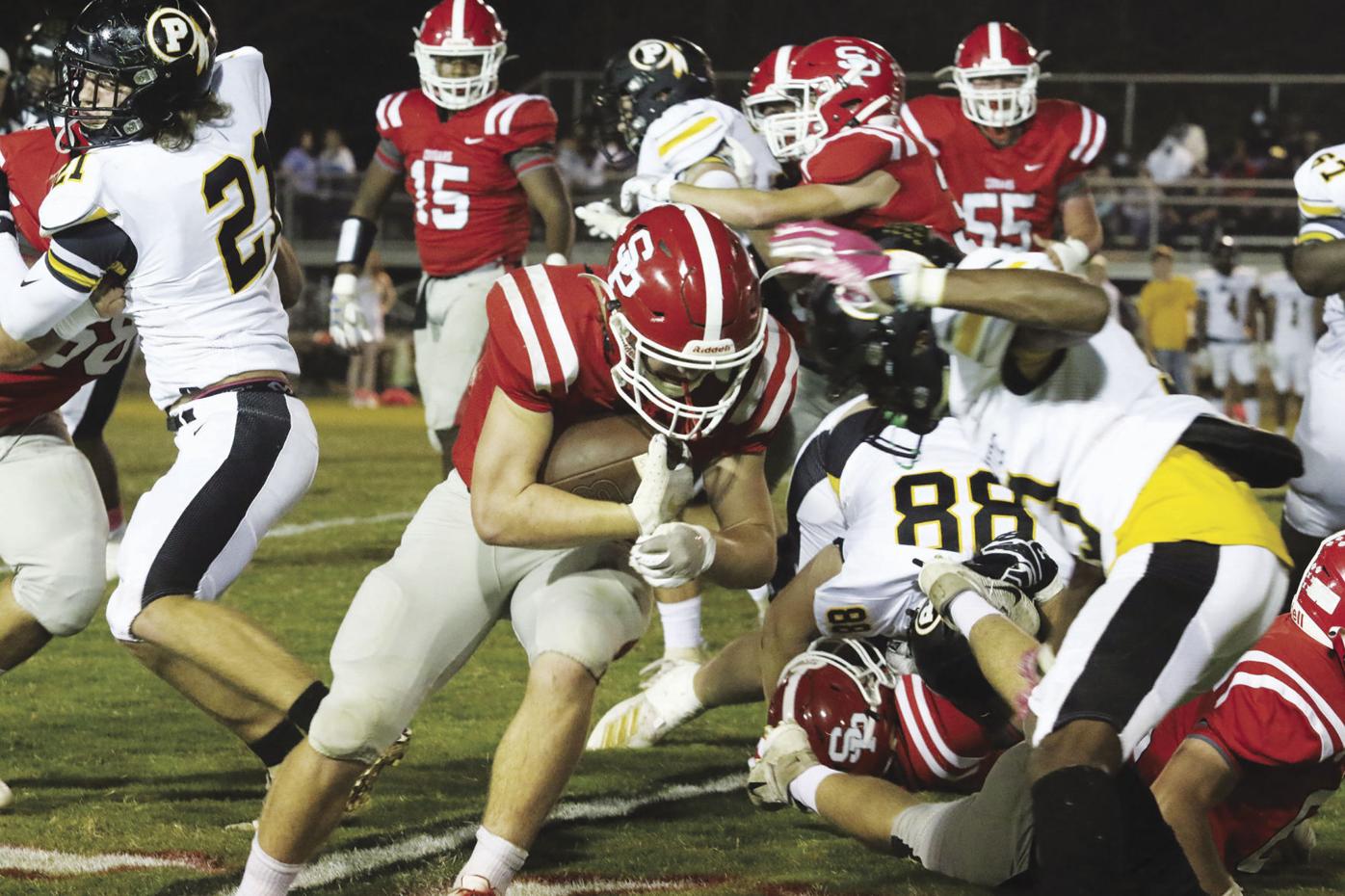 South Pontotoc running back Cody Stutsy lowers his shoulders for some tough yardage.

Warrior running back Jemarkus Whitfield carries the ball around the left edge for a big gain in Pontotoc's 36-29 win over county rival South Pontotoc on Friday.

South Pontotoc running back Cody Stutsy lowers his shoulders for some tough yardage.

SPRINGVILLE – It was a tale of two halves at the now annual Division 2-4A rivalry contest between the South Pontotoc Cougars and the visiting Pontotoc Warriors on Friday, and the Tribe hung on to outlast the Cats by seven, 36-29.

It was the best of times for the Warriors in the first half. Pontotoc put up 21 first-half points, headed by a surgical passing attack from Conner Armstrong, who went 11 for 20 for 204 yards and one TD on the evening, and strong running from Jemarkus Whitfield, who rushed for 165 yards and 4 touchdowns on 19 carries.

Pontotoc went on the war path early, returning the opening kickoff to the 35 yard line. Armstrong hit Kyleal McShan, who caught three passes for a team-leading 56 yards on the night, as the Tribe crossed midfield. Armstrong followed with a strike to Nic Townsend who rumbled to the Cougar 35 yard line. Whitfield took the handoff on a misdirection and scampered in for the Warriors’ first score.

The Warriors’ defense smothered South on the following possession and a miscue on the punt gave Pontotoc the ball at the Cougar 24. Pontotoc struck quickly, as Armstrong hit McShan on a post route for a score, and with the PAT the Warriors surged ahead 14-0 with eight minutes to play in the first quarter.

Early in the second quarter the Cougars rode strong running from Quay Scott and Cody Stutsy into Warrior territory. Pontotoc’s defense stiffened, however, as defensive back Jordan Ball leaped high and intercepted a Cougar pass along the home sideline.

The teams exchanged punts, and the Warriors took advantage of a short kick to strike again. The Tribe started their drive from the Cougars’ 40 yard line. Armstrong hit McShan with a crisp pass to the 27. Armstrong followed with another dart over the middle to Cade Armstrong to the six. A TD up the middle from Whitfield and a PAT later and the Tribe carried a 21-0 lead into halftime.

Flip the script and it was the best of times for the Cougars in the second half. The Cats roared out the locker room, returning the kickoff to the 19 yard line. Stutsy carried the ball off left tackle for nine yards. Right guard Brandon Flake and right tackle Colin Tallent pulled and laid crushing blocks for Quay Scott to rumble off the left side into Warrior territory, and with yardage added for a horse-collar tackle the Cougars were in business at the Warrior 19 yard-line.

Chase Foster cleared some room for Stutsy to carry the ball to the five yard line. Quarterback Eli Allen drew the Warrior defense offsides with a hard count, and Chase Long crashed into the end-zone behind a strong block from Wes Lindsey. Noah Fleming added the PAT, and with 8:53 to play in the third quarter the Cougars started clawing back into the contest at 21-7.

The Warriors answered. Damien Murphy and Carter Cleveland provided strong blocking, as Pontotoc marched down the field on the ensuing kickoff. Receiver L.J. Jones got a good block on the left edge to spring Whitfield, as he scampered into Cougar territory.

Eric Kuykendall was not fooled by a Warrior reverse and tackled the ball carrier for a loss back near midfield.

Conner Armstrong clipped off a sharp pass to Cade Armstrong, advancing to the Cougar 36 yard line. L.J. Jones snatched a pass from the air and lunged to the three.

South’s Kuykendall sacked Armstrong for a loss, but the Warrior offense punched back. Carter Cleveland and Colton Hillhouse led Whitfield into the end zone, and with the PAT Pontotoc took a 28-7 lead into the final frame.

Quay Scott and Chase Long carried the load for the Cougars, as they marched down the field late in the third quarter. On the first snap of the fourth quarter, Eli Allen rolled to his right and launched an arching sideline throw on a wheel route for Clayton Heatherly. Heatherly reeled it in and landed at the one foot line. Offensive lineman Brandon Flake lined up at fullback and muscled it in for the TD, and with the PAT the Cougars cut the Warriors’ lead in half at 28-14.

South’s Kuykendall shot through the Warrior offensive line and pounced on a fumbled snap from the shotgun formation, giving the Cougars the ball at Pontotoc’s 27 yard line. Allen dropped back and hit a diving Heatherly on the same wheel route to the end zone, and with the two-point conversion South pulled within a touchdown at 28-22 with 10:45 left in the game.

The Warriors wasted no time striking back, as Marty Reel returned the kickoff to the Cougar 46. Whitfield took a delayed handoff straight up the gut and rumbled for a touchdown, and after the two-point conversion Pontotoc led 36-22.

The Cougars relied on power football on their final scoring drive. Long ran for tough yardage to near midfield. Warrior defenders Kentrel Peters and Jon Robert Carnes combined on a tackle for no gain to slow the Cougars’ advance. The right side of the Cougar offensive line helped power South into the red zone. On first and goal from the four yard-line Mickelle Dawson surged over the goal line, and the PAT South trimmed the Warrior lead to 36-29.

The Warriors marched into scoring position on the ensuing drive, with offensive linemen Colton Hillhouse and Tyler McGregor clearing a path for Whitfield. As time expired Armstrong took a knee on three consecutive snaps to end the game.

Pontotoc will travel to Caledonia (2-3) on Friday, while South will host Shannon (3-3).