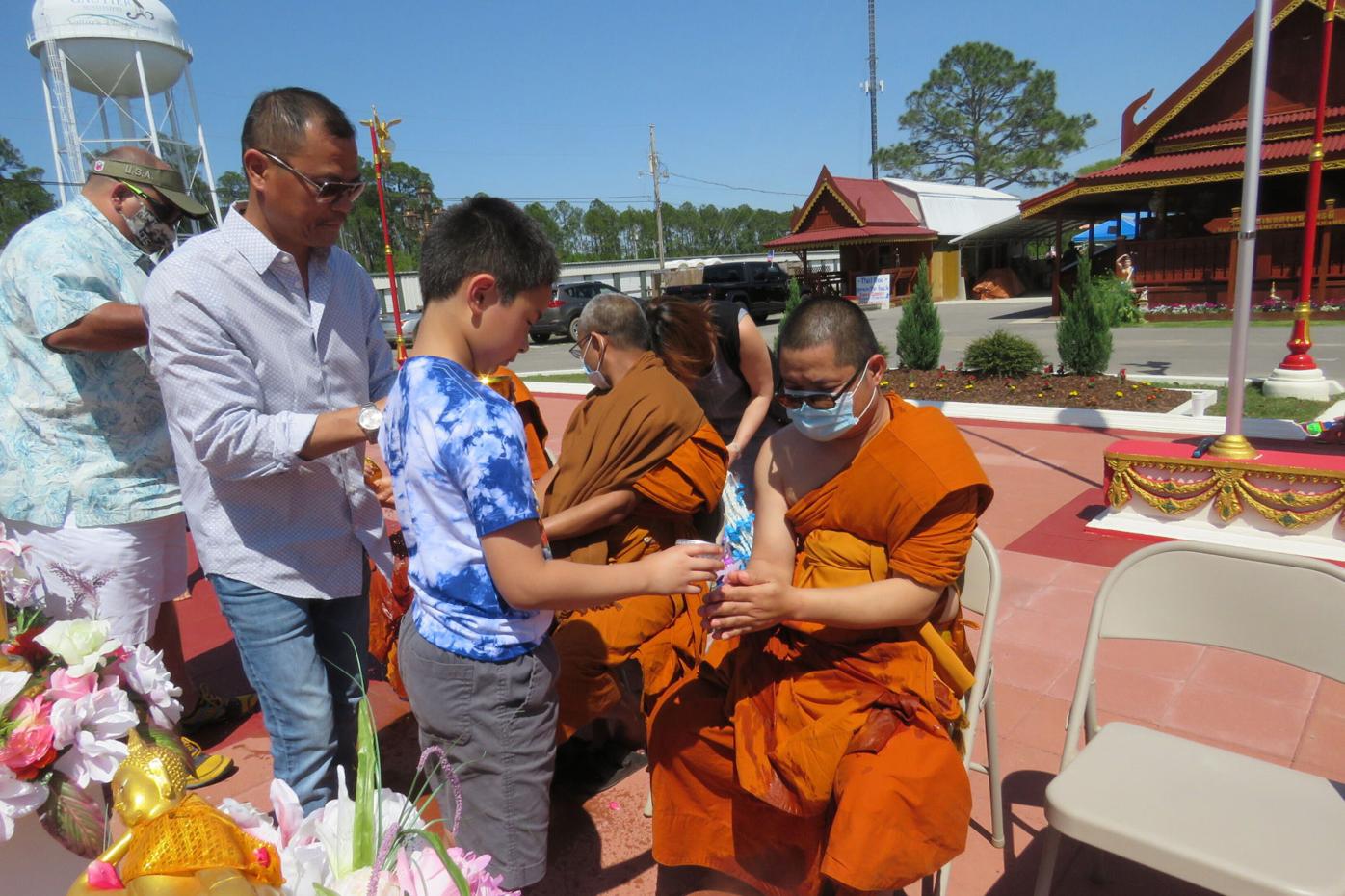 Festival attendees pour water on the monks at Wat Budhametta Mahabaramee in Gautier., on April 11. During Songkran, water symbolizes the washing away of wrongdoing and bad things from the past year. 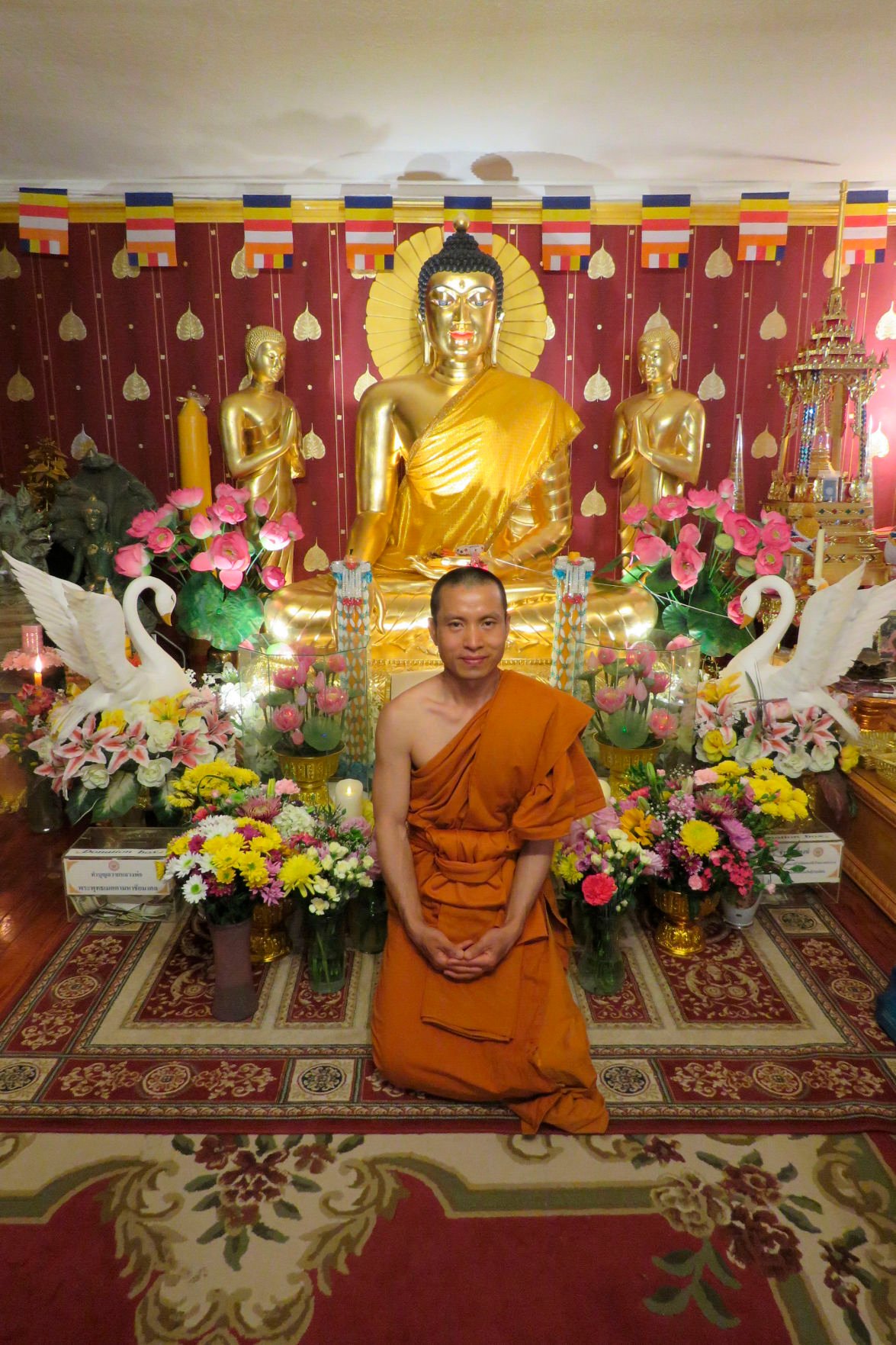 Pisit Opnititanit, a Buddhist monk from Thailand, at Wat Buddhametta Mahabaramee, in Gautier, Miss, as the temple community celebrated Songkran, the Thai New Year, on April 11. Since it’s beginning, he’s transformed a typical suburban-style house into a structure with many of the features of Thai temple architecture.

Festival attendees pour water on the monks at Wat Budhametta Mahabaramee in Gautier., on April 11. During Songkran, water symbolizes the washing away of wrongdoing and bad things from the past year.

Pisit Opnititanit, a Buddhist monk from Thailand, at Wat Buddhametta Mahabaramee, in Gautier, Miss, as the temple community celebrated Songkran, the Thai New Year, on April 11. Since it’s beginning, he’s transformed a typical suburban-style house into a structure with many of the features of Thai temple architecture.

BILOXI • Pisit Opnititanit left Thailand and eventually found his way to a few acres of land next to a cow pasture on Martin Bluff Road in Gautier.

The Buddhist monk could have stayed in his home country, where 95 percent of people practice Theravada Buddhism. Instead, his devotion led him to the Mississippi Gulf Coast by way of New Orleans.

Since Wat Buddhametta Mahabaramee opened in July 2016, Opnititanit and fellow monks and volunteers have transformed a typical suburban home, adding gabled tile roofs in the traditional style and an intricately carved wooden porch. A sign outside advertises the Sunday sales of Thai food, which is how most of Wat Buddhametta’s non-Buddhist neighbors get to know the place.

The temple is the only Therevada Buddhist temple in Mississippi and one of a handful on the Gulf Coast.

“It’s not just a religious place, it’s more like a community center, for gathering, eating good food, and enjoying life,” said Monsiri Jintasawang, whose mother has been involved with the temple since it opened.

Jintasawang lives in Las Vegas, but she drove her RV across the country to help out at the temple’s celebration of Songkran, the Thai New Year. The festival on Sunday brought people from Louisiana, Alabama, Mississippi, and Florida to the temple to pray, share food, and seek blessings for the new year.

Rita Ritano, who was born in Bangkok, came from New Orleans. Next week, a Thai temple there will hold a celebration. There’s also one in New Iberia, Louisiana and several around Irvington, Alabama, home to a Cambodian and Laotian community.

Because the temple communities all over the Gulf South are relatively small, the new year celebrations are staggered so people like Ritano and monks can attend all of them.

In Thailand, people mark the holiday by going to the temple to pray, make donations to the monks, and acknowledge wrongdoings during the last year.

“And then the community throws water at each other,” Ritano said. “It means you’re clean.”

Wirinda Rongdech, 24, was among the visitors to Wat Budhametta Mahabaramee on Sunday. Rongdech is from southern Thailand but has been studying and working in New Orleans. A Thailand-born colleague invited her to join their trip.

“I just wanted to see how a Thai temple in America looks,” she said.

It was different from Songkran in Thailand, where part of the festivities is huge water fights. The holiday falls during the hottest part of the year in Thailand, so the water is not only a symbol of ablution but also welcome relief from the heat.

In big cities like Bangkok, people arm themselves with water guns and buckets, and the water fights turn into huge street parties. As Rongdech put it, people “get drunk and get wet.”

The holiday falls on April 13 but is celebrated through the 15th, and everything shuts down so people can go home to be with their families.

“The most important thing, the key, is reunion,” said Joe Khotwong, a legal advisor to Wat Buddhametta Mahabaramee and head monk at Wat Wimuttayaram Buddhist Temple in New Orleans.

“When children leave their parents for work in the city, they come back for the New Year,” he said.

Theravada Buddhism In The Gulf South

Theravada Buddhism is also the dominant religion in Laos and Cambodia, and Wat Buddhametta Mahabaramee serves community members with roots in those countries, too. There are some Vietnamese attendees, too, but most Vietnamese Buddhists align with Mahayana Buddhism, and on the Coast, most Vietnamese Americans are Catholic.

The first Theravada Buddhists arrived in the Gulf South in the 1970s as refugees after the Vietnam War.

Some of them eventually made their way to the Gulf Coast. Cambodians arrived in Alabama around Bayou La Batre in 1975 and soon built their own temples. Laotians and Vietnamese came to work in the seafood industry there, too.

U.S. Census data breaks down national origin for some of Mississippi’s roughly 30,000 Asian residents, showing that about 7,000 Mississippians have roots in India and about 11,000 in Vietnam. But the census doesn’t have a separate box for Cambodians, Laotians and Thais to check. Instead, they are gathered with other nationalities under the umbrella “other Asian,” which encompasses about 2,000 people in the state.

Thai immigrants to the U.S. came mostly for economic reasons – Ritano arrived 40 years ago as a student. Some of the longest-standing members of the community in Mississippi are women who met their American husbands when they were serving in the Vietnam War.

Khotwong’s temple in New Orleans was established in 2009. Historically, Thai Buddhists in Mississippi have traveled to Louisiana or Alabama for festivals and events.

Finding a monk who could establish a temple in Mississippi was a challenge, he said.

Joe Khotwong is a legal advisor to Wat Buddhametta Mahabaramee in Gautier and head monk at Wat Wimuttayaram in New Orleans. He visited the Gautier temple for Songkran on April 11. Isabelle Taft

A Monk On A Mission

Then, Opnititanit, who had been at Khotwong’s New Orleans temple, decided to move to Gautier. The location was good, within a three-hour drive of small Thai communities in Florida, Alabama, Mississippi and Louisiana. And, to a missionary of Theravada Buddhism, setting up a temple where there was none held appeal.

In addition to regular prayers and participating in festivals, Opnititanit and his colleagues teach visitors, including non-Buddhists, about Buddhism and meditation.

He also oversees the physical expansion and remodeling of the temple. His construction skills are self-taught via YouTube and internet research.

Every week, volunteers cook and sell dishes like pad Thai and papaya salad to help raise money for the temple’s expansion.

The landscaping and decorations in front of the temple were all imported from Thailand, said Khotwong. The temple community is planning to build a multi-purpose center, and the monks will once again handle the construction.

“There is no money,” Khotwong said. “We devote our life to serve Buddhism. That’s our return, not money.”

Opnititanit spends many days working in front of the temple. It’s cheap, and it gives him a chance to meet people who might be wondering about the statues of the Buddha on Martin Bluff Road.

“Every day, people stop by,” he said. “The temple is for everyone in the world.”