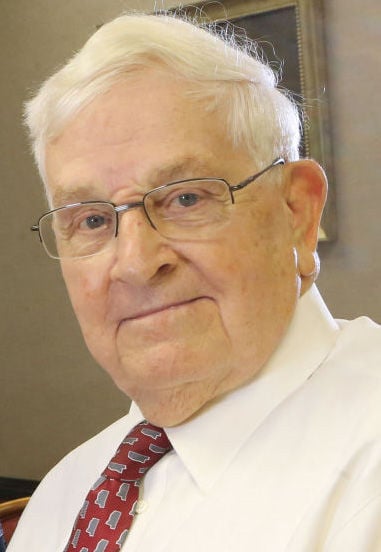 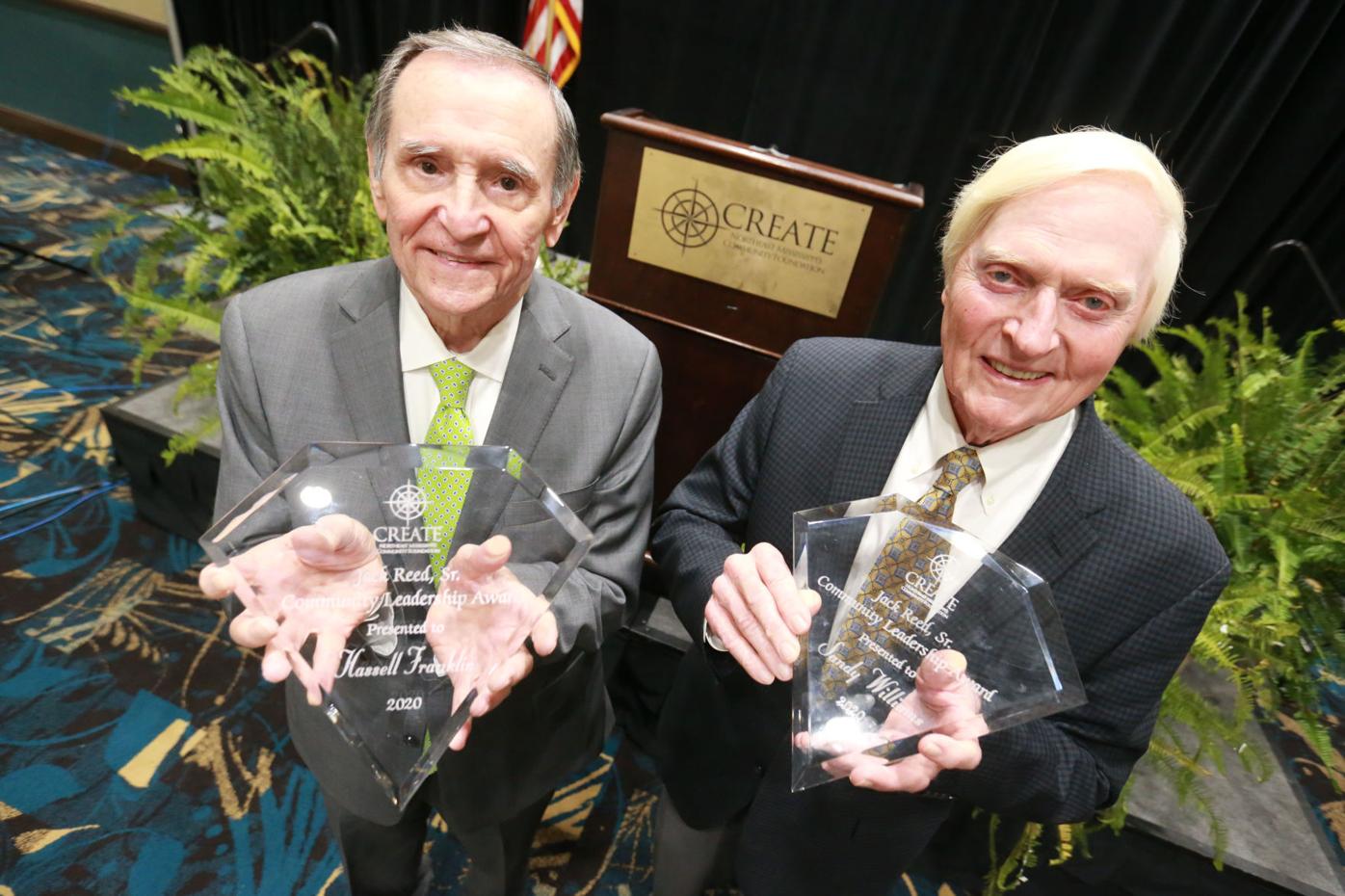 Hassell Franklin, left, and H.L. “Sandy” Williams were both presented with the Jack Reed Sr. Northeast Mississippi Community Leadership Award at the BancorpSouth Conference Center in Tupelo, Thursday. Aubrey Patterson of Tupelo and the late Bobby Martin of Ripley also won the award. 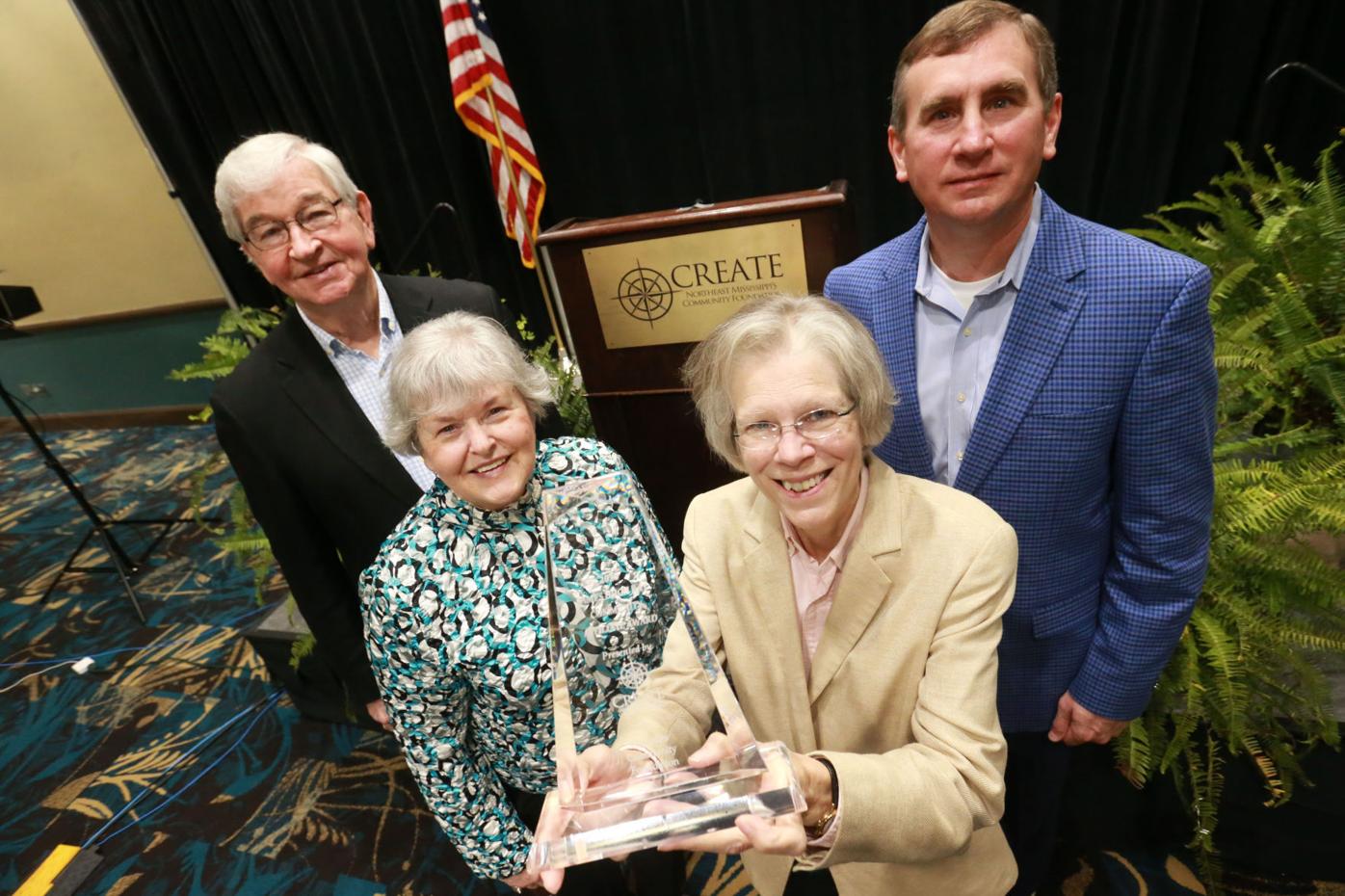 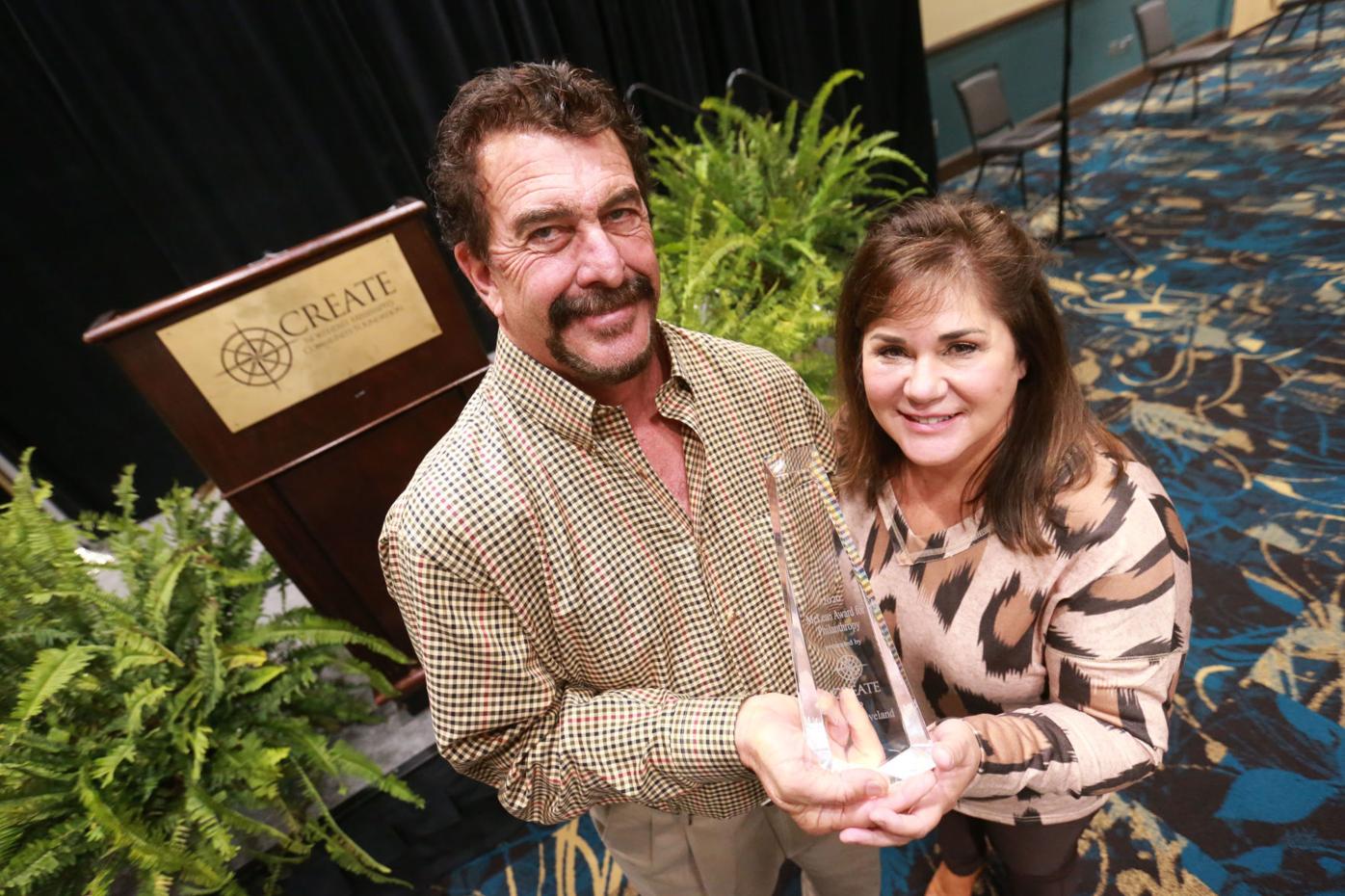 V.M Cleveland, left, and his wife, Melanie accept the 2020 McLean Award for Philanthropy. 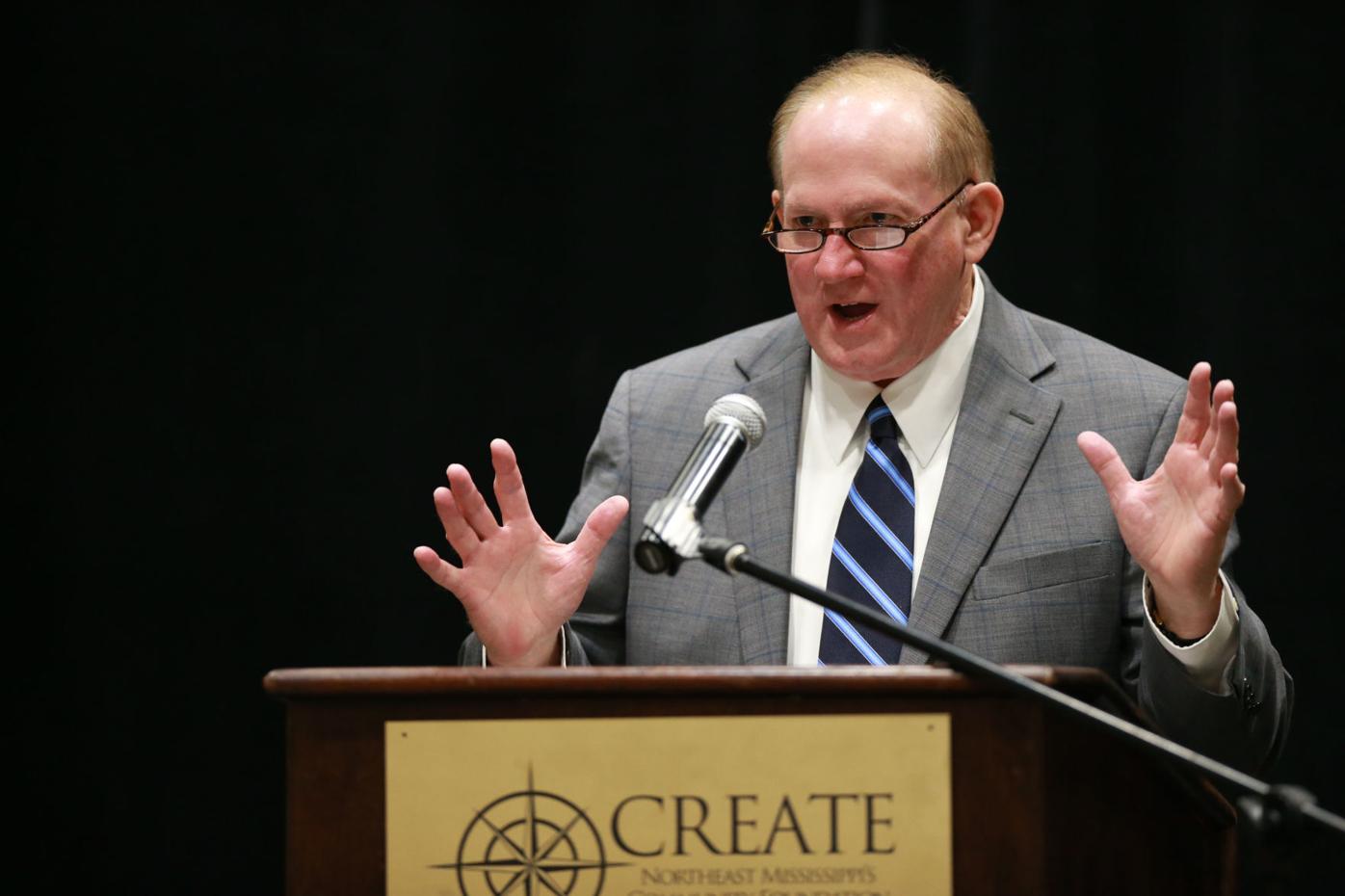 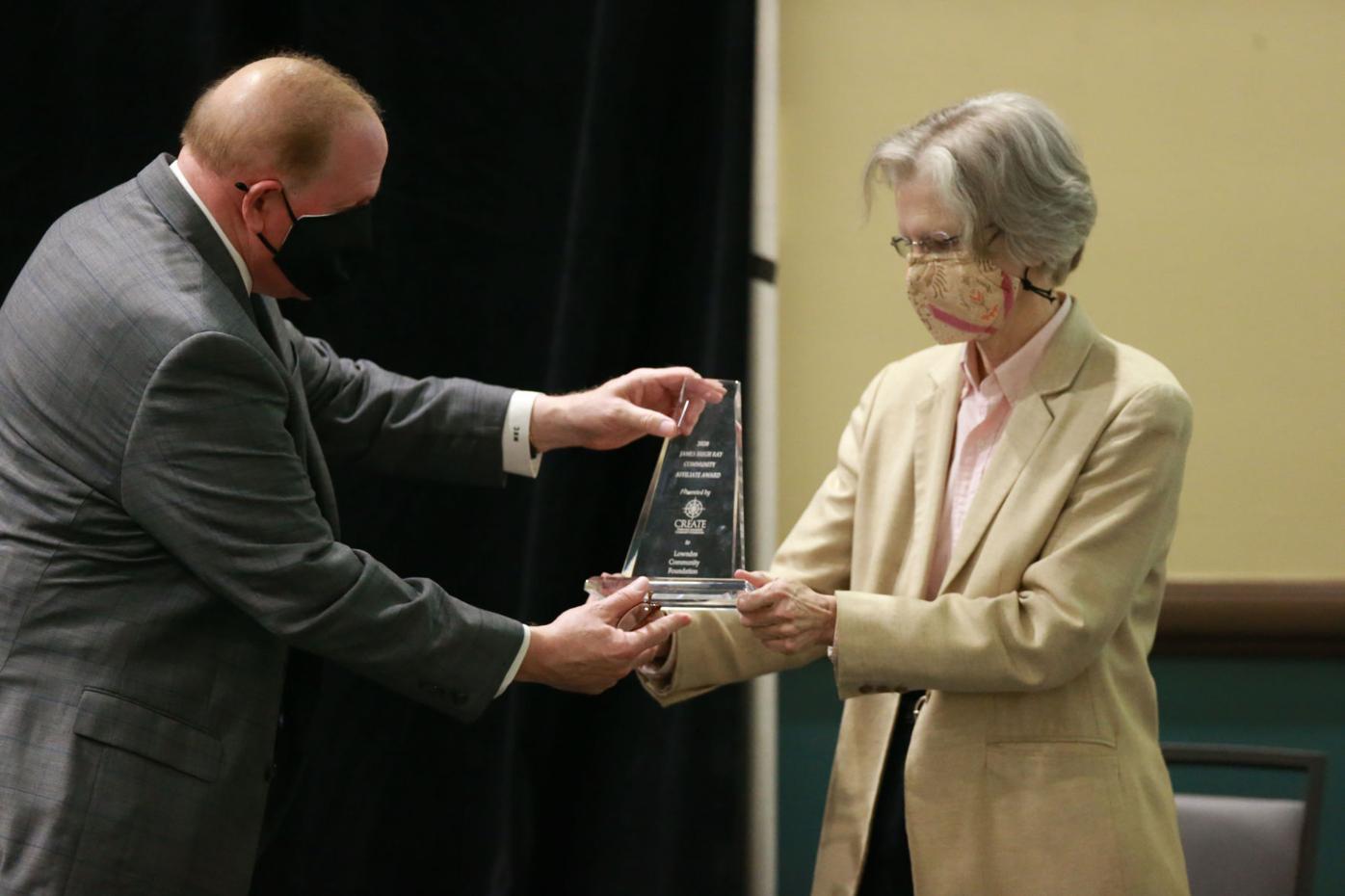 Mike Clayborne presents Jo Shumake, a member of the Lowndes Community Foundation, with the James Hugh Ray Award at Thursday’s annual meeting of the CREATE Foundation in Tupelo. 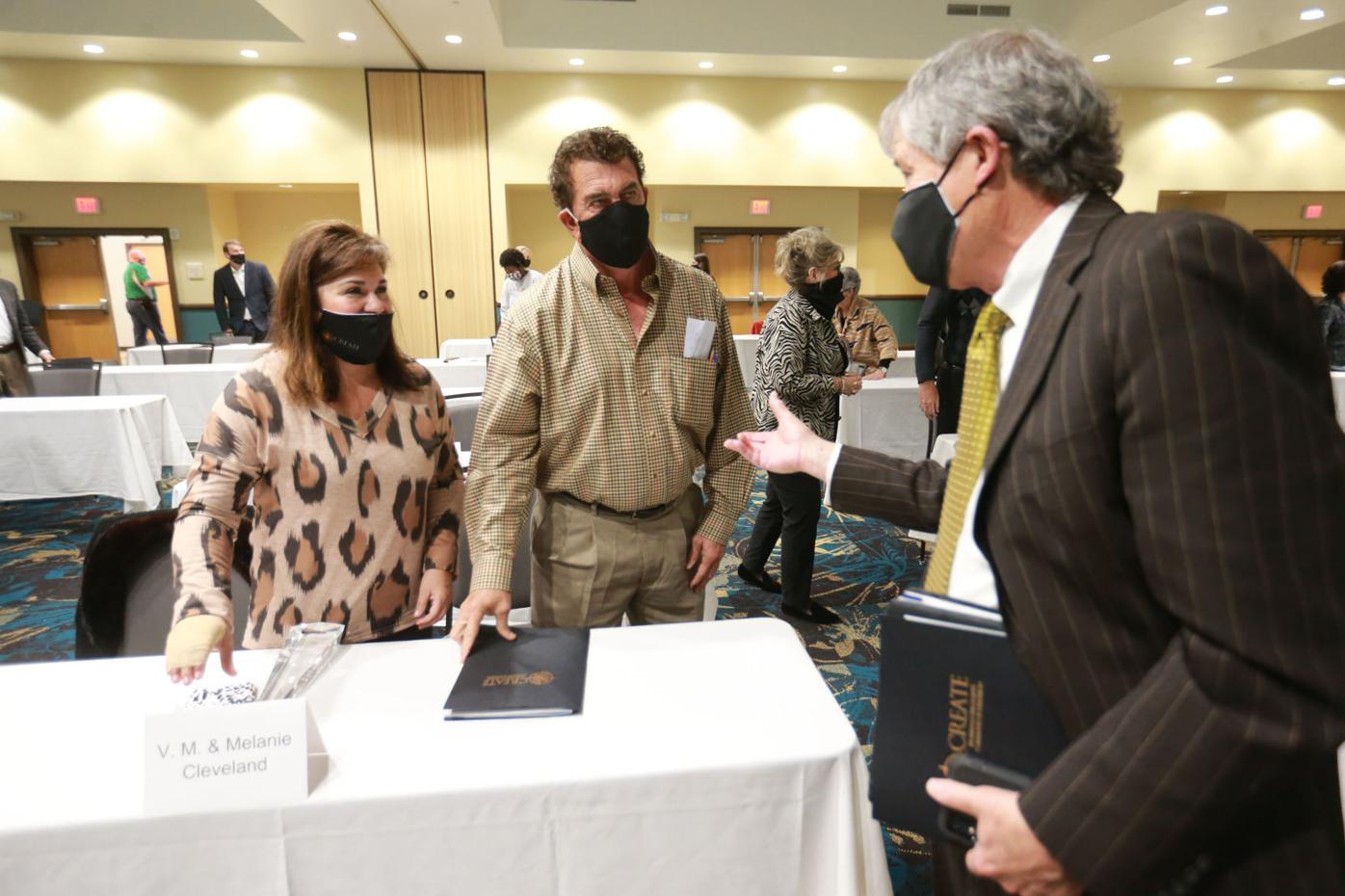 Hassell Franklin, left, and H.L. “Sandy” Williams were both presented with the Jack Reed Sr. Northeast Mississippi Community Leadership Award at the BancorpSouth Conference Center in Tupelo, Thursday. Aubrey Patterson of Tupelo and the late Bobby Martin of Ripley also won the award.

V.M Cleveland, left, and his wife, Melanie accept the 2020 McLean Award for Philanthropy.

Mike Clayborne presents Jo Shumake, a member of the Lowndes Community Foundation, with the James Hugh Ray Award at Thursday’s annual meeting of the CREATE Foundation in Tupelo.

TUPELO • Aubrey Patterson, Hassell Franklin, H.L. “Sandy” Williams and the late Bobby Martin exemplified how to give back and improve the community that helped shape them. Throughout their long careers, all four served as the chair of the CREATE Board, started CREATE affiliates, received numerous business and service honors, and served on the Commission on the Future of Northeast Mississippi Board.

They were honored as the 2020 recipients of the Jack Reed, Sr. Northeast Mississippi Community Leadership Award at the CREATE Foundation’s annual meeting, held at the BancorpSouth Conference Center Thursday.

Although Martin, longtime president and CEO of The Peoples Bank of Ripley, died Wednesday afternoon, his commitment to improving his native Tippah County left a legacy throughout the region.

“I can think of no one who better epitomized what we’re trying to do here at CREATE. Not only was Bobby a very generous man, he was a visionary when it came to promoting and supporting his community and the people around him,” said CREATE Chairman Bryan Wilson.

The legacy of both Martin and the award’s namesake left an impact among fellow recipients Hassell Franklin, chair and founder of the board for the Franklin Corporation in Houston, and Sandy Williams, chair of the board of Corinth Coca-Cola Bottling Works. Williams, who assisted in the founding of the Coca-Cola Scholars Foundation and helped spearhead the creation of the Corinth-Alcorn Reaching for Excellence foundation, said it was a joint honor bestowed upon all four recipients for their service, philanthropy and volunteerism throughout Northeast Mississippi.

“What’s coming up in my mind is reciprocal,” Williams said. “I have derived just as much pleasure and good out of my relationship with CREATE as I have hopefully done. I often think about the things that need to be done, that are not being done, and how can we get them done.”

Franklin awards the Franklin Corporation Scholarship annually and has been honored as the Alumnus of the Year with Itawamba Community College. Franklin grew up close to Tupelo, and grew up with Jack Reed, Sr. as his hero. He would later work and be friends with Reed, and said he couldn’t think of a higher honor.

Wilson described Patterson, former BancorpSouth CEO, as a leader who “moves in the shadows,” preferring silent philanthropy. He serves in various leadership roles at First Presbyterian Church Tupelo, was inducted into the Mississippi Business Hall of Fame and received the Silver Buffalo Award from Boy Scouts of America.

The CREATE Foundation also announced this year’s McLean Award recipient, VM Cleveland, Tupelo Furniture Market Chairman/CEO. His service and leadership on various boards and committees for the Salvation Army and Sanctuary Hospice, showed a commitment to contributing to the community.

“I certainly feel humbled and appreciative. Every time you do something for charities, you’re blessed in more ways that you give,” Cleveland said. “We love everything that we do and we just can’t do enough.”

The Lowndes Community Foundation received the James Hugh Ray Award, presented annually to one of CREATE’s 13 affiliates. The affiliate receives a $2,000 grant alongside the honor.

Co-chair Jo Shumake and Executive Director Jan Eastman gave most of the credit for the foundation’s success to the community, not just the board. The foundation has granted over $150,000 in grants to 43 organizations and allocated $30,000 in challenge grants, agreeing to match $10,000 with $5,000 (check).

A March 2018 community forum, which had over 200 community residents, allowed the community to prioritize five areas: education; proficiency; crime and addiction; community engagement, leadership and vision; and poverty. Eastman described their role as a facilitator, and Shumake said their community, rather than the board, are the ones leading the charge.

While COVID-19 has presented hurdles in their ability to meet with the community and have task forces report their progress since 2018, LCF remains happy and proud of their work so far and wants to keep doing it, Shumake and Eastman said. Shumake hopes the award will serve as an impetus to continue their work and do even more when the pandemic is over.

While this year’s annual meeting limited their usual 200 attendees to less than 50, Wilson was grateful to have the opportunity to recognize this year’s recipients and share CREATE’s accomplishments this year.

“Northeast Mississippi is not unlike a lot of areas in the country, but we also have a lot of challenges in our area, from everything from broadband internet to food security to education opportunities,” Wilson said. “CREATE Foundation works in all those areas to help make sure our youth have equal education opportunities, to make sure there’s food security … We just try to help out in any way we can to make the burden a little bit easier, particularly through this difficult time.”