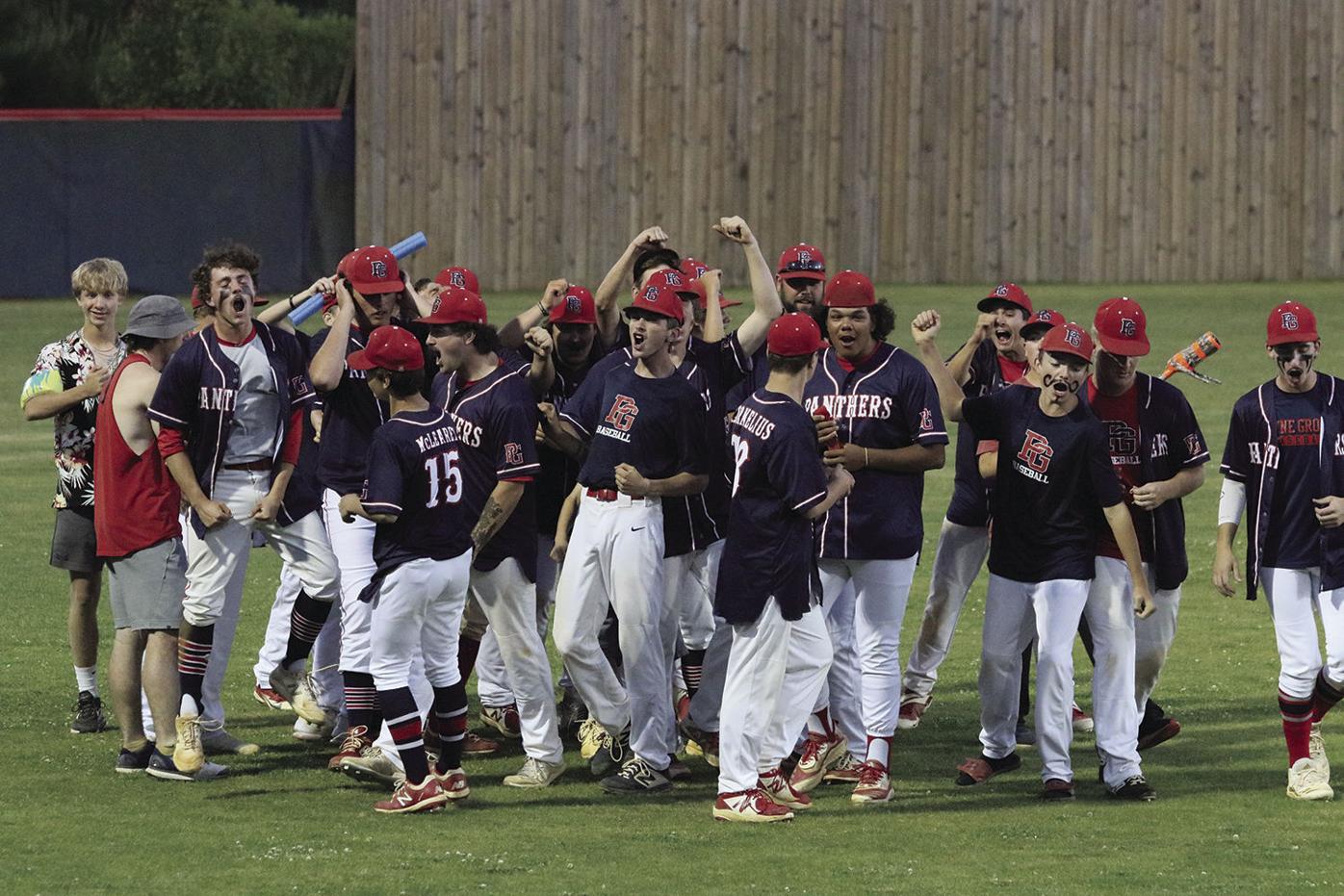 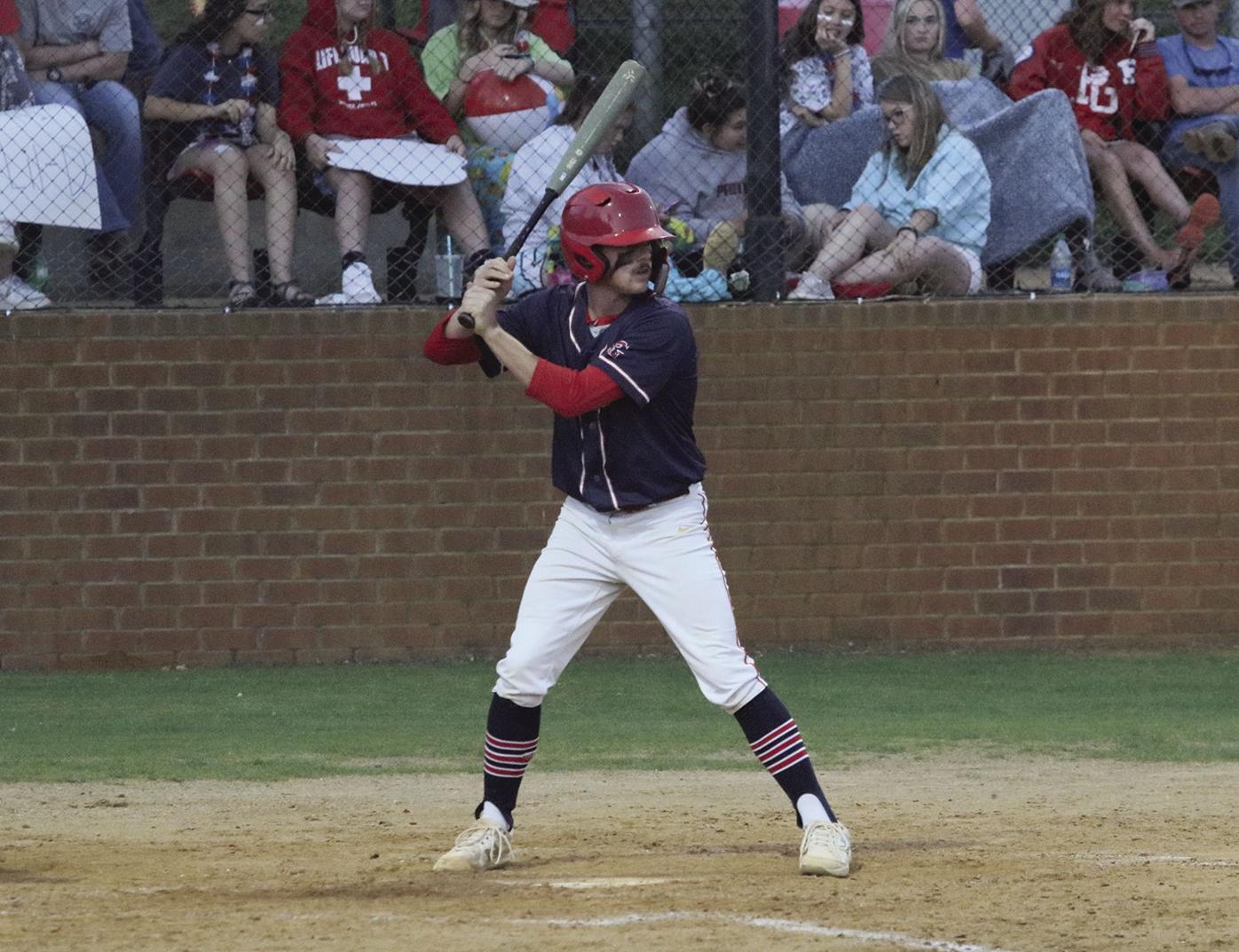 Cason Jones readies his swing in game two of the Panthers' series vs Hamilton. Jones picked up five hits in game one and made the game sealing advance home in game two.

Cason Jones readies his swing in game two of the Panthers' series vs Hamilton. Jones picked up five hits in game one and made the game sealing advance home in game two.

Pine Grove – The Pine Grove Panthers are headed to the 1A North Half Finals after defeating Hamilton in their third round playoff series 2-0. The Panthers took care of business in the sweep, defeating Hamilton 13-3 on the road before returning to Pine Grove the next night and securing the series win in walk off fashion in front of a full crowd of Panther faithful.

“I told those guys that I wouldn’t wanna go into it with any other group,” Coach Matt King said after game two. “They’re all competitors, they’re all fighters, and they’re gonna be ready to go next week.”

The Panthers will take on TCPS in the North Half finals, with game one at TCPS starting at six on Friday, game two at Pine Grove on Saturday at one, and, if necessary, game three at TCPS will be on Monday at six.

The Panthers began their third round series with Hamilton with a bang, jumping out to a 9-0 lead after three innings. This was in large part thanks to a seven run, five hit third inning that saw Carson Rowland, DJ Smith, Brice Lindley, and Cason Jones all drive in runs.

Jones got the start for the Panthers on the mound and racked up plenty of strikeouts, getting ten total in 4.2 innings of work while giving up three runs on three hits. The first of those runs came in the bottom of the third when Hamilton responded to Pine Grove’s seven-run inning with a Quinn Pounders double that brought a run across home plate.

Cooper Rinehart extended the Panthers’ lead to 10-1 in the top of the fifth with an RBI-single to right field, before Hamilton responded in the bottom of the inning by getting a pair of runs off of base-loaded walks. Pine Grove scored again in the top of the sixth when Rowland made it home off of a Hamilton fielding error, and put the finishing touches on the win in the top of the seventh when two more runs came across for the 13-3 game one victory.

Along with picking up double digit strikeouts, Jones picked up five hits in the batter’s box, along with an RBI. Rowland and Jacob Hopkins picked up three RBIs apiece while Rinehart finished with a pair of RBIs himself.

While game one may have been a blowout in Pine Grove’s favor, game two was anything but, as this game came down to the last at-bat.

Pine Grove struck first on the scoreboard in the bottom of the second, when a Jones double brought home a run, followed by a Rinehart fielder’s choice putting the Panthers up 2-0. Joshua West put Hamilton on the board with the first at-bat of the third inning, as a deep shot to center field brought him all the way around back home. A pair of RBI-singles by Grayson Cockerham and Sam Robinson gave Hamilton the 3-2 lead before Pine Grove responded with a Gunnar Kirkman RBI in the bottom of the third for the 3-3 tie.

Rowland came in relief in the top of the third and finished the game for Pine Grove, not allowing Hamilton to pick up another run in his 4.1 innings of work while striking out four. Pine Grove and Hamilton were deadlocked until the bottom of the seventh inning, when a Jones single and a Rinehart double set up Jones at third base. Jones managed to take home on a wild pitch, sealing the 4-3 walk-off win for the Panthers.

“I feel really good coming off of a sweep,” Jones said postgame. “It just feels good, we got that win early on the road and came back and got it done at home.”