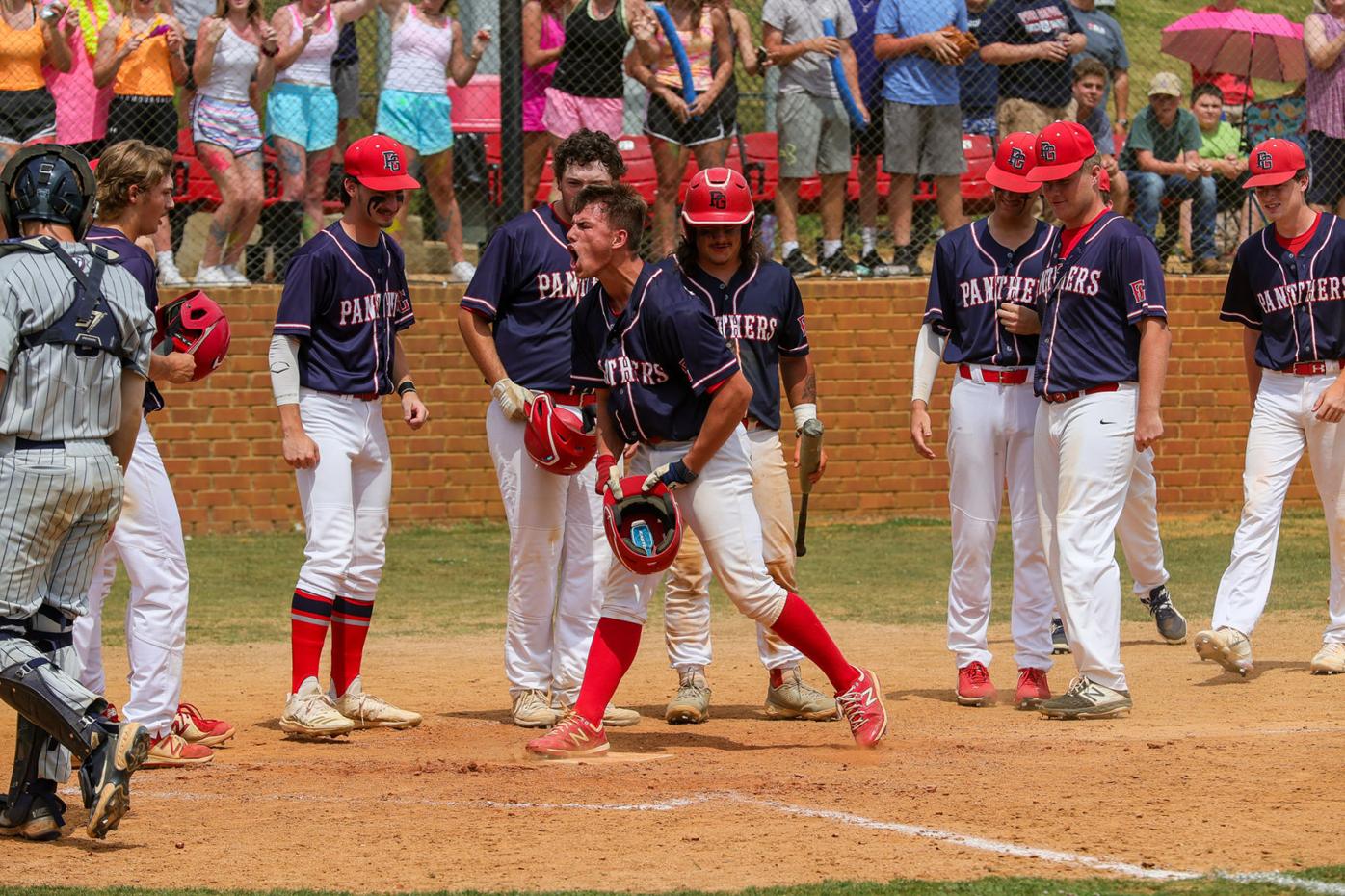 Pine Grove's Carson Rowland shows some emotion following his two-run home run in the bottom of the fourth on Saturday. Rowland hit two home runs in the game, giving him four homers in this postseason. 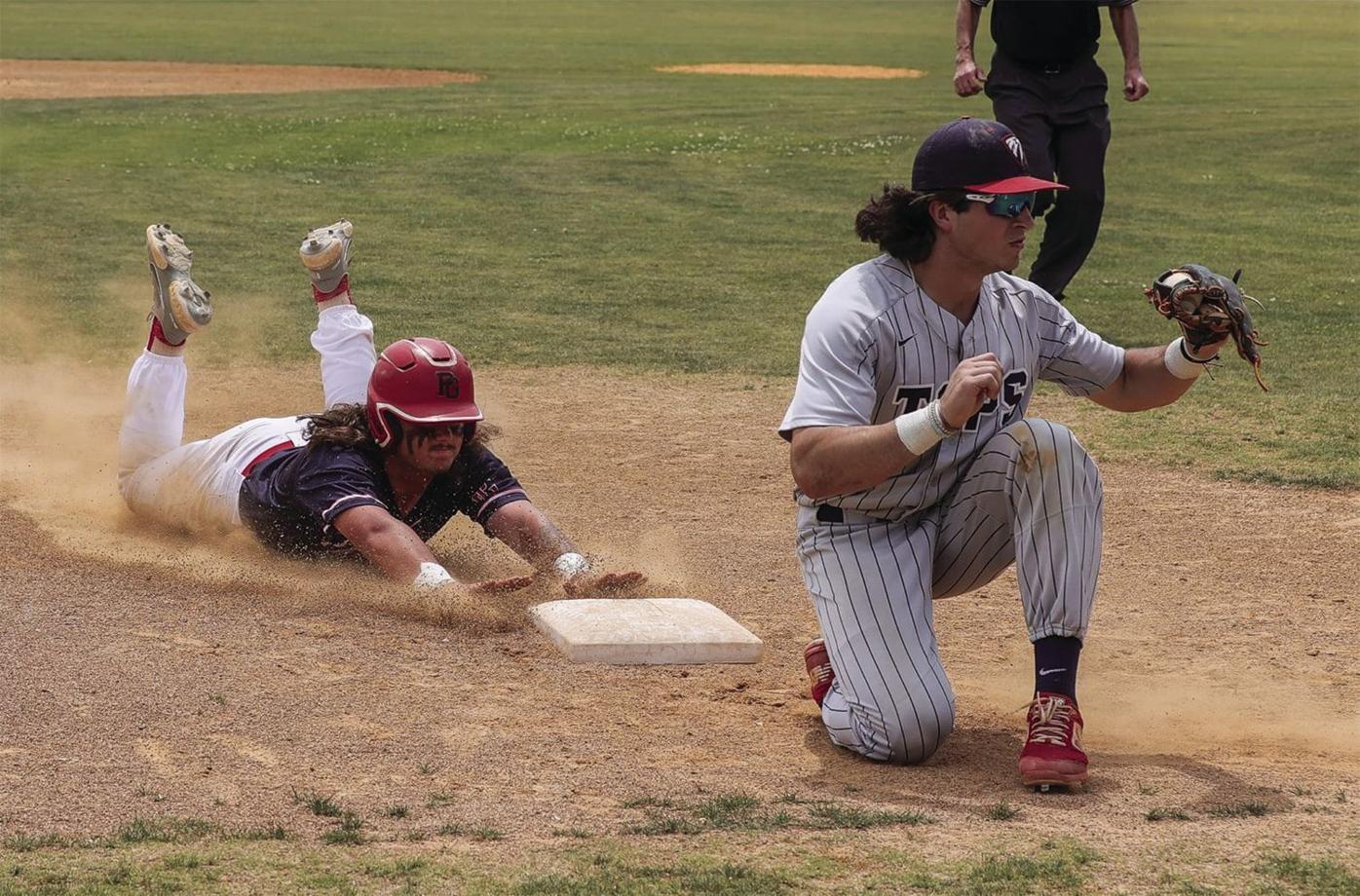 Pine Grove's Carson Rowland shows some emotion following his two-run home run in the bottom of the fourth on Saturday. Rowland hit two home runs in the game, giving him four homers in this postseason.

PINE GROVE • The Pine Grove Panthers’ 2021 season came to an end on Monday night, as the Panthers came up just short in their North Half Finals series against Tupelo Christian Prep. TCPS took game one 8-0, Pine Grove came back with a 16-11 win in game two, and in the series finale, TCPS edged out Pine Grove 7-5 to advance to the 1A State Championship Finals.

The Panthers struggled in game one of the series, as a dominate performance by TCPS starter Daniel Reddout and multiple home-runs by the Eagles gave them a 1-0 lead in the series.

Neither team got much momentum going until the bottom of the third inning, when Khi Holiday blasted a two-run homer over the left field wall to give TCPS a 2-0 lead. This gave way to a six-run bottom of the fourth for the Eagles, as a JP Yates three-run homer capped off the scoring run for the Eagles.

Jacob Hopkins came in relief, and pitched two innings without allowing a run on just one hit, but the damage had been done. Pine Grove only managed to pick up three hits for the game as Reddout and the TCPS defense, which did not commit an error in the game, mostly shut down Pine Grove’s lineup.

While game one may not have been the best offensive performance for Pine Grove, game two made up for lost time, as the Panthers put up 16 runs off of 13 hits to take game two in front of a crowd of Panther faithful.

TCPS struck first in the top of the second, as Holiday drove in a pair of runs off a double. A fielder’s choice and a sacrifice fly gave the Eagles two more runs in the next inning to go up 4-0. The Panthers responded in the bottom of the third, as Brice Lindley hit an RBI-single, and TCPS errored on a ball put in play by John Bullock to cut the Eagles’ lead to 4-3. TCPS responded by scoring a pair of runs off of a Pine Grove error in the top of the fourth to extend their lead to 6-3.

The bottom of the fourth is where the game turned around for Pine Grove, as a Carson Rowland two-run homer sparked a ten-run inning that saw five different Panthers pick up hits, capped off by a Gunnar Kirkman triple that drove in three runs.

The Eagles did not go away however, as a Noah Foster picked up a 3-RBI triple of his own the very next inning, cutting Pine Grove’s lead to 13-10. A DJ Smith solo shot to right field extended the Panthers’ lead in the bottom of the fifth, before solo shots by Kirkman and Rowland, his second of the day, put Pine Grove up for good.

The series came down to a pivotal game three at TCPS, and while the game went down to the wire, the Panthers ultimately came up just short, as TCPS took the game 7-5 and the series 2-1.

Rowland picked up right where he left off in game two, as he hit a two-run homer in the first inning to give him his third home-run of the series, and put Pine Grove up 2-0. TCPS quickly responded with a four-run bottom of the first, highlighted by a Noah Foster single that drove in a pair of runs.

Foster got the start for the Eagles and, while he gave up two early runs off of the Rowland homer, gave Pine Grove fits for the rest of the game, pitching all seven innings while striking out eight. Foster extended the Eagles’ lead in the bottom of the second with an RBI-single before Yates further put TCPS out in front with a sacrifice fly to give the Eagles a 6-2 lead.

Kirkman and Hopkins picked up an RBI apiece in the top of the sixth to cut the Eagles’ lead to 6-4. Controversy reared it’s head in the bottom of the sixth inning, as Foster hit another RBI-single. The TCPS runner that was at second came around and was called safe at home plate off of this hit, however this was an extremely close call that Pine Grove head coach Matt King argued and was eventually ejected from the game over.

The Panthers loaded the bases and cut the TCPS lead to 7-5 in the top of the seventh, however it was not enough, as a Foster strikeout ended the series and the season for the Panthers.