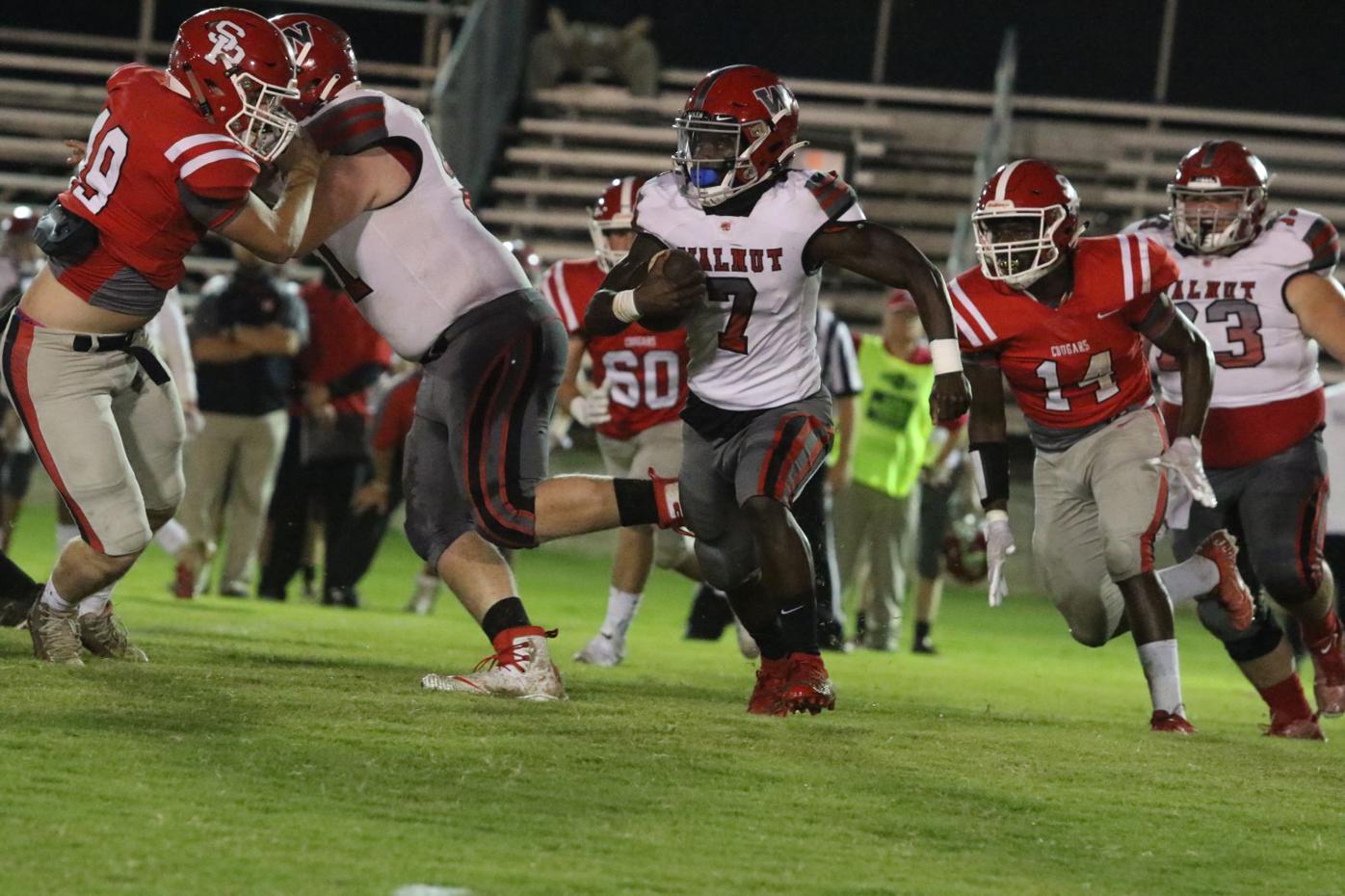 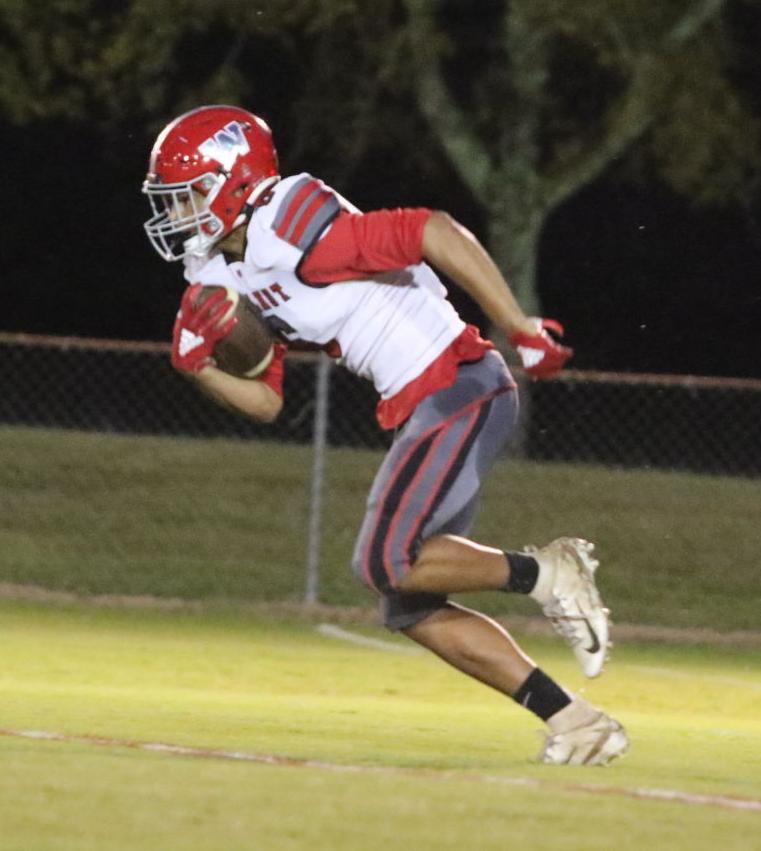 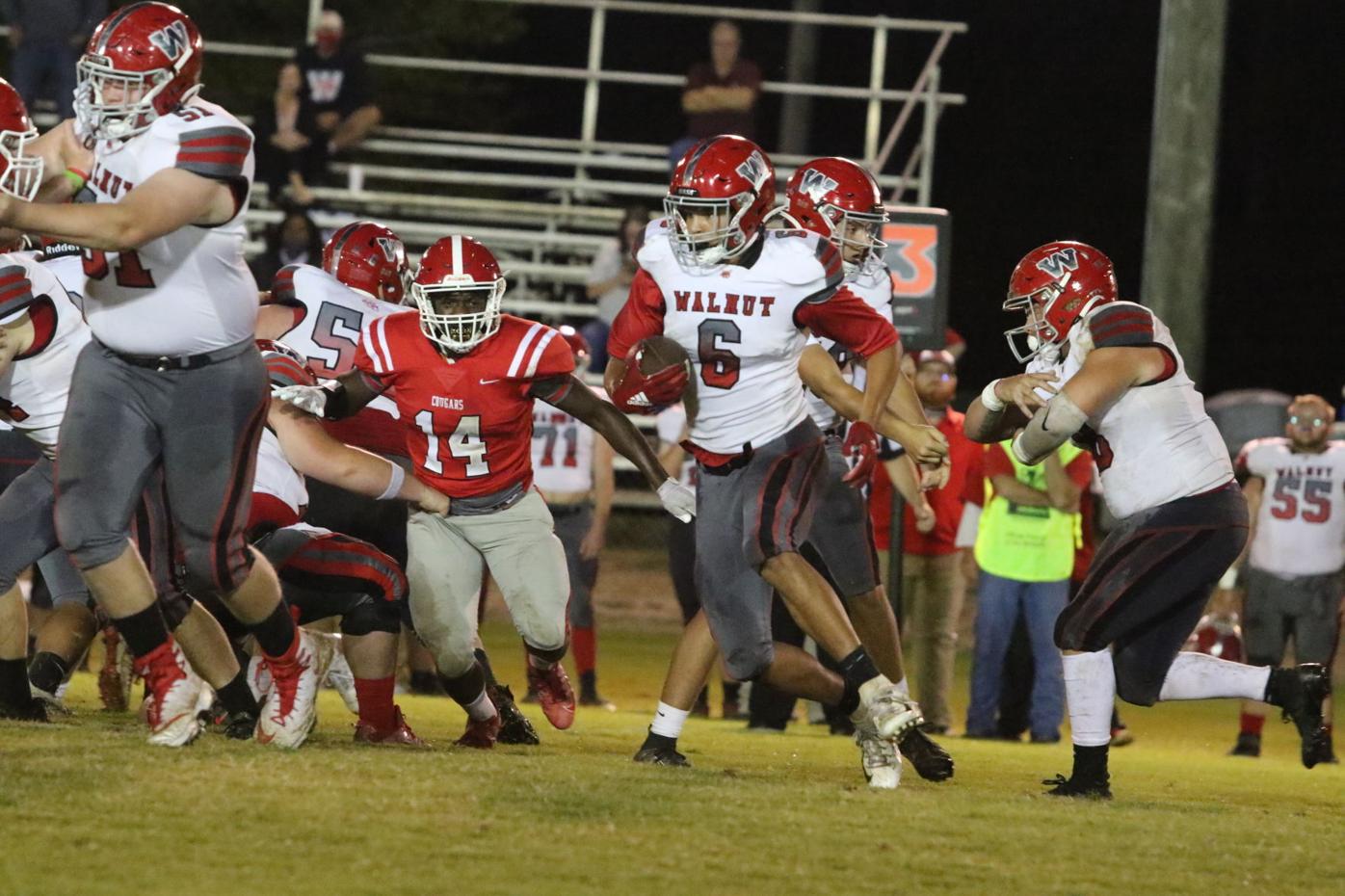 Walnut's T.J. Luellen takes the handoff looking for a hole to run through in last Friday's loss to South Pontotoc. 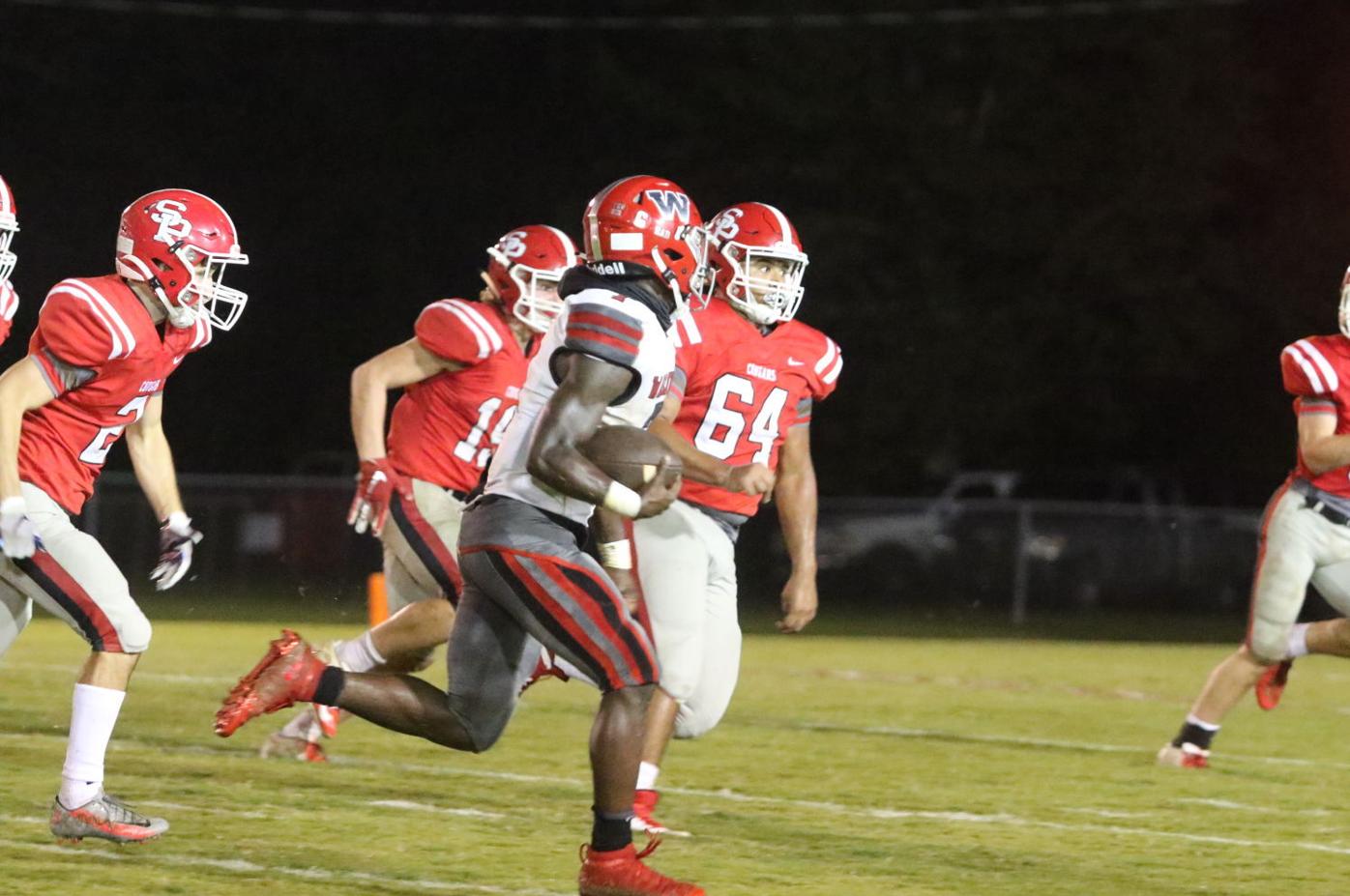 Walnut's T.J. Colom runs with the ball down the sideline as South Pontotoc defenders give chase. 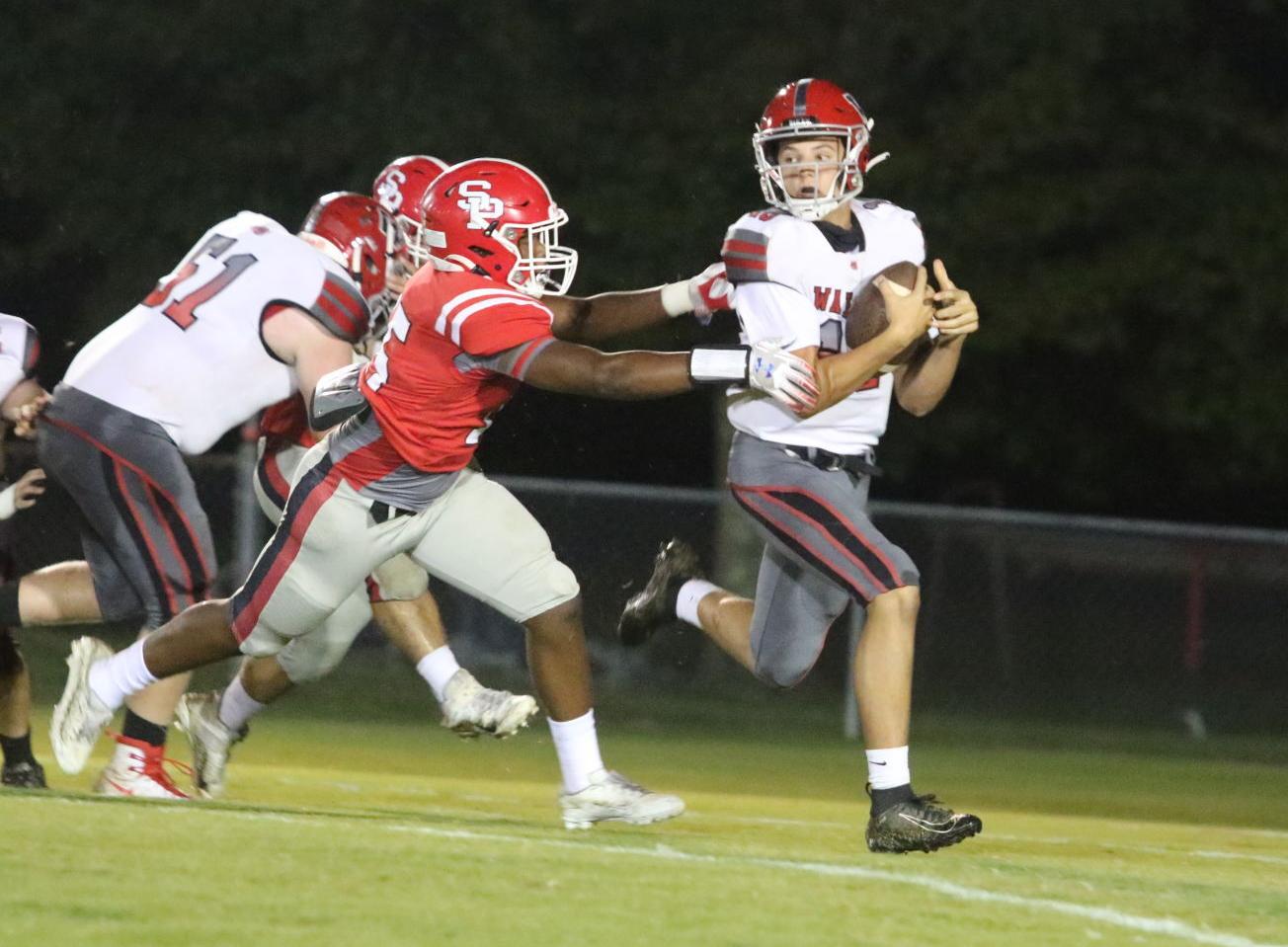 Walnut's T.J. Luellen takes the handoff looking for a hole to run through in last Friday's loss to South Pontotoc.

Walnut's T.J. Colom runs with the ball down the sideline as South Pontotoc defenders give chase.

SPRINGVILLE - The South Pontotoc Cougars gave up an early score but then slammed the door defensively on the visiting Wildcats from Walnut on Friday, taking a decisive home victory 38-7. It was the second straight win for the Cougars, who improved to 3-1 on the season.

Walnut returned the opening kickoff to the Cougars’ 35 yard-line. On the first play from scrimmage quarterback Cade Hunt hit T.J. Colom streaking down the visitors’ sideline on a go route for a touchdown. The extra point put the Wildcats up 7-0.

The Cougars caught the opening haymaker on the chin, but they steadied themselves and counterpunched.

Chase Long rumbled to the Wildcats’ 43 yard-line. He then picked up a first down running behind the left side of the Cougar offensive line. Cody Stutsy scampered for 18 yards and was wrestled down just short of the goal line. Mickelle Dawson pounded it in for a touchdown behind a strong block from Larkin Gillespie, and with Fleming’s PAT the Cats drew even at 7-all.

The Cougar defense got fired up and started a long night of hard hitting and hustling, as Chandler Coker stuffed a pitch wide from Walnut. Stutsy, Coker, and Eric Kuykendall swarmed the ball, forcing a Walnut punt.

The Cougars failed to score on their following possession. After the punt, Quay Scott chased the Walnut quarterback all the way back to the Wildcats’ own 4 yard-line for a sack, and the first quarter ticked away with both teams even.

Early in the second, Dawson rumbled around the left edge behind road-clearing blocks from Gillespie and Stutsy, moving the Cougars to the Walnut 12-yard line. Scott took a handoff and started left, then reversed field to his right and slashed into the end zone following solid blocks from Patrick Akers and John Lindsey. With the extra point, the Cougars pulled out front to stay at 14-7.

The Cougar defense continued thumping and generally harrying the Wildcats’ offense, as Kenneth Waters, Kuykendall, and Isaac Finley combined on a group tackle for no gain. Dawson got a strong rush on the Walnut quarterback to force an incompletion. Finley broke up a long Wildcat pass attempt, and Walnut turned the ball over on downs at South’s 14 yard line with 3:37 to play in the half.

South’s offense stalled, but the defense came through. After a Cougar punt, Bennett Mayo picked off a Wildcat pass and returned it to the Walnut 25 yard line. That set up Finley for a touchdown run, and with the extra point South went into halftime with a 21-7 lead.

South received the second half kickoff. Early in the drive Stutsy ran hard down to the Wildcats’ 37 yard-line. Quarterback Eli Allen drew the Walnut defense off sides with a hard count. Dawson ran for hard yards to get in position for a 33-yard field goal by Noah Fleming, putting the Cougars up 24-7.

Later in the quarter Brandon Flake recovered a Wildcat fumble that set up Stutsy for an 18-yard touchdown run, and with the point-after try, the Cougars took a 31-7 lead into the final frame.

South capped the game with Stutsy carrying the ball to the 1 yard-line. Flake then lined up as fullback and hammered it into the end-zone. The PAT put the Cats up 38-7.

Braxton Morphis put a big hit on a Wildcat receiver in the flat, holding him to no gain, and Finley picked off a Walnut pass as well.

Justify Your Existence, 10/21/20: What Kiffin said Wednesday + what to expect from Auburn

MSU safety Peters to miss remainder of season with injury