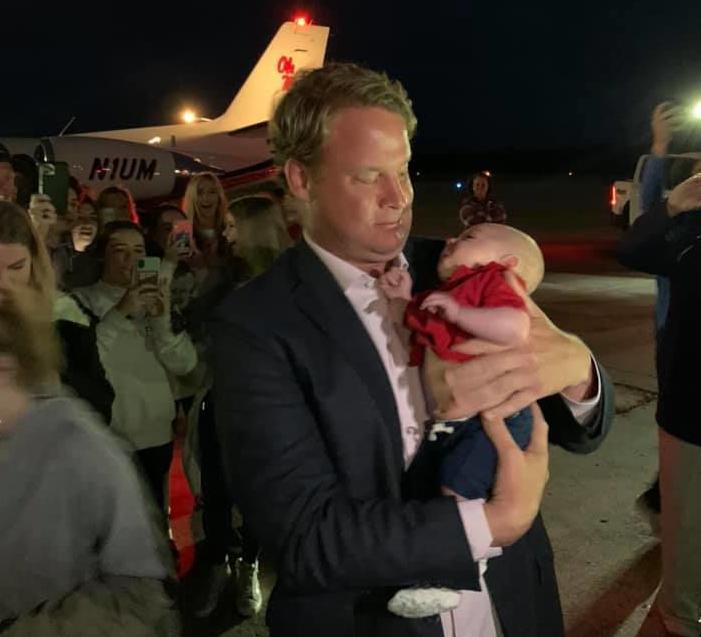 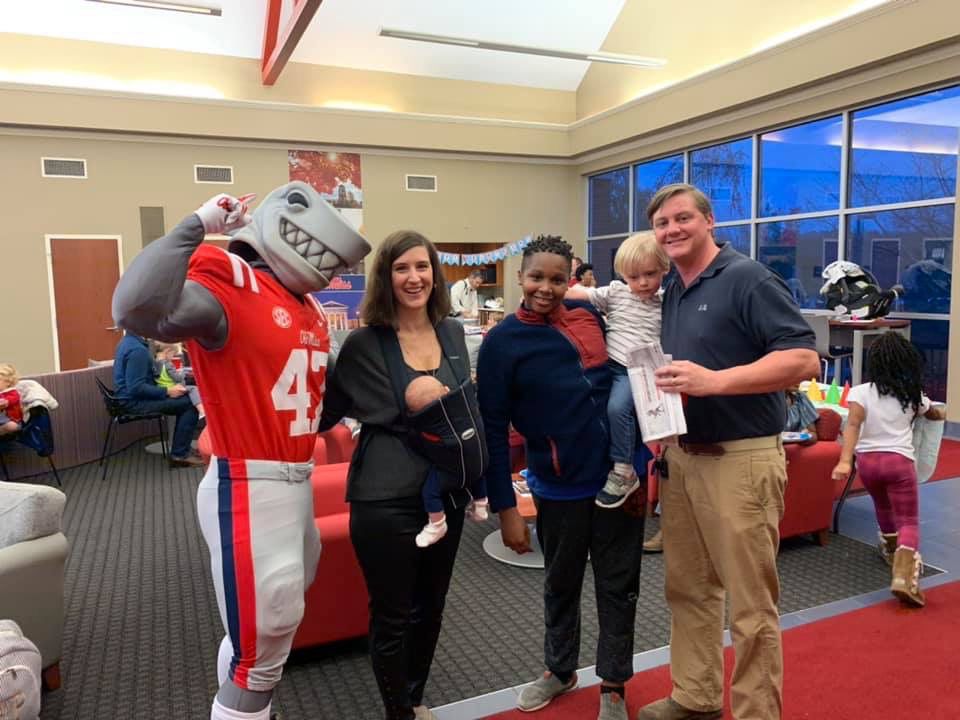 When reaction first began to roll in from the comment heard 'round the internet, Mills Hawkins and his wife wondered what kind of blow back they might receive at work.

Hawkins hadn't planned for new Ole Miss football coach Lane Kiffin to land in Oxford and crash his three-year-old son's birthday party, nor had he planned for his tongue-in-cheek line, "Get you a burner phone, alright?" to make the rounds it did on social media, national news media websites, and TV broadcasts.

But that's what happened when a plane carrying Kiffin landed at Oxford-University Airport while Hawkins, along with friends and family, were enjoying his son Ben's birthday party. Hawkins joined a couple hundred Rebel fans on the tarmac to greet their new football coach, and the Oxford resident famously handed his two-month-old baby, Harrison, over to Kiffin for a photo.

You probably know the story by now, as Kiffin handed the child back to Hawkins delivered a line inspired by the turmoil that plagued Hugh Freeze's tenure in Oxford. It's a statement Hawkins says has drawn not only praise, but also anger and even parenting advice.

Luckily, Hawkins nor his wife received any trouble from their bosses. In fact, it's a move the sales representative for Magnolia Brick in Oxford says has been a positive for his career.

"I've been able to talk to clients that I've been trying to get in touch with that normally don't do business with me," he explained.

"That was the first time I've been brought up as a meme on the internet. I always make the joke that now I'm such an A-lister on par with like Snooky and Honey Boo-Boo and the guy from the Cannon commercial."

Although, Hawkins's fame might not last as long as the run of Honey Boo-Boo, his comment was featured on ESPN, CNN, Fox, the Paul Finebaum Show, and even in Golf Digest. In fact, it even made the news in Croatia, where his brother happened to be visiting and saw him mentioned on a local news broadcast.

"He saw the clip on some local news channel while he was sitting in a bar," Hawkins noted. "He didn't understand any of what was being said, so he had no idea about the burner phone comment until he got back."

In the days following the incident, Hawkins reached out to a friend that works for the university and expressed a desire to apologize to Kiffin. That has morphed into hopes of turning this one-time incident into a chance to make more memories alongside his children.

"Initially, I wanted to apologize to Kiffin, but I wanted to meet the guy, actually. I hope at some point I get to," Hawkins stated.

A meeting hasn't happened or been discussed just yet, but Hawkins has been able to put together a "heckuva" scrapbook for his son Harrison, with pictures of his meeting with Kiffin. And if Kiffin's tenure goes the way Ole Miss football fans are hoping, the legend of this tale will only grow more entertaining for Hawkins and his family.

As for a bump from Kiffin, Hawkins feels that Oxford is already seeing the effects of bringing in the former NFL and big-time college football head coach. It started with reaction at the Rebels basketball game against Cal-State Bakersfield on Saturday, Dec. 7, when FAU's bowl game was shown on the screen for fans, ultimately two days before Kiffin was announced as the school's new coach.

"You heard a pop from the crowd like Hulk Hogan was entering the arena. People just went crazy. I texted my wife, 'that was the sound of a re-energized fan base,'" he said.

Furthermore, Hawkins rents out his family home each fall during football weekend through Airbnb, but the demand for it has been steadily declining since the fallout from the Hugh Freeze firing.

But through contractors that he works with on a regular basis, he's heard the real estate market could be in line for an uptick.

"In my client base right now, I'm hearing chatter of people coming in and contacting developers that I deal with saying 'hey, we're either going to buy a house, looking for a realtor or we want to build,'" Hawkins said. "It was kind of leveling off towards the end of the year. Everything had kind of died down, but I feel like it's about to pick up."