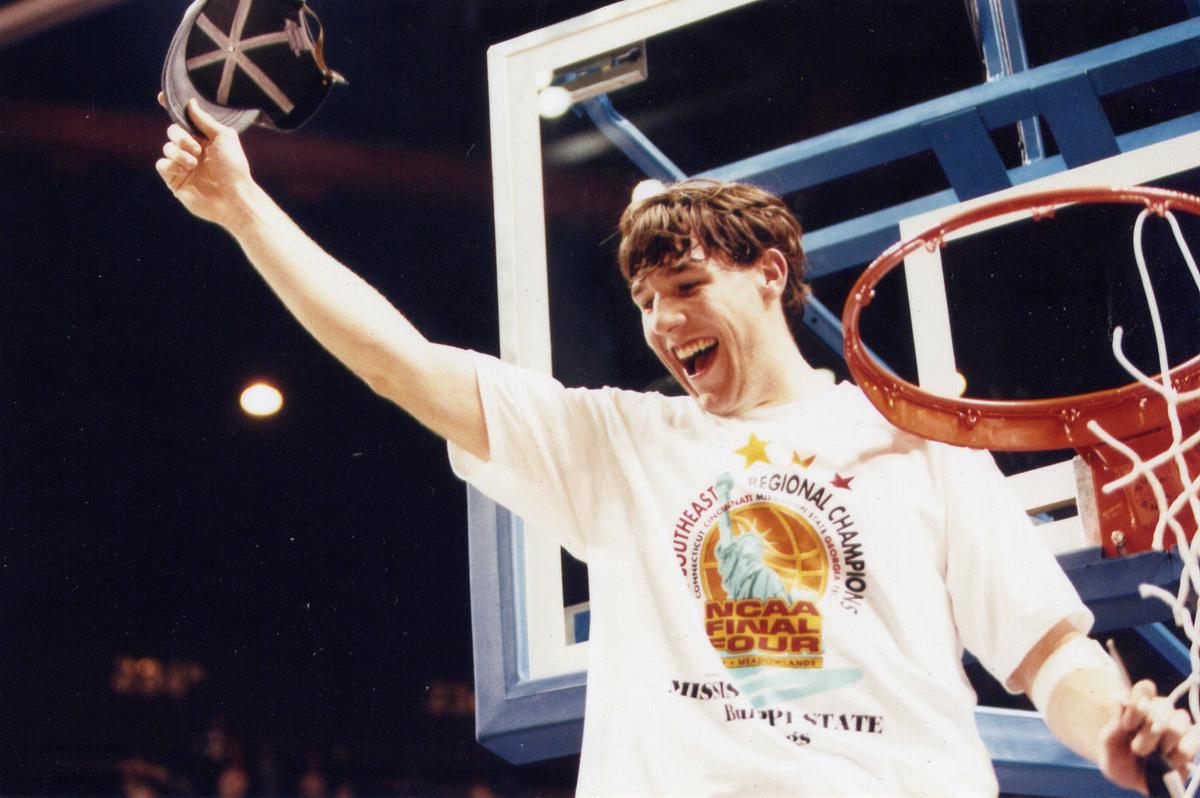 Mississippi State sixth man Whit Hughes celebrates after the Bulldogs’ victory over No. 7 Cincinnati to win the 1996 NCAA Southeast Regional – sending MSU to the Final Four. 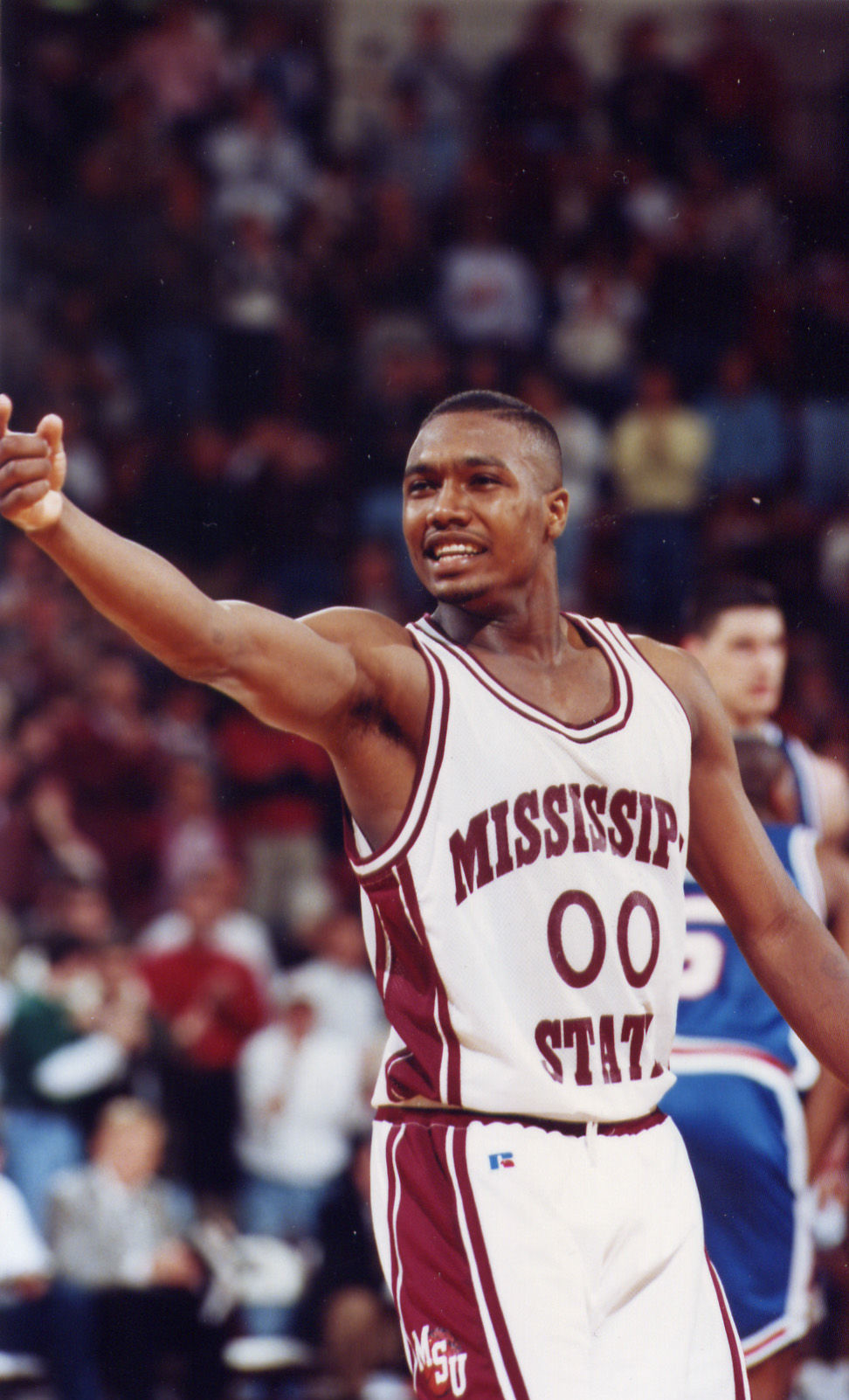 Mississippi State sixth man Whit Hughes celebrates after the Bulldogs’ victory over No. 7 Cincinnati to win the 1996 NCAA Southeast Regional – sending MSU to the Final Four.

The Golden Triangle Regional Airport was the place to be Sunday night, March 24, 1996, for Mississippi State fans.

They came in droves from nearby Columbus, Starkville and other communities in the region to welcome home their Bulldogs, who just hours before had defeated favored Cincinnati to win the NCAA Southeast Regional basketball championship at Rupp Arena in Lexington, Kentucky.

The victory clinched the program its first berth in the Final Four.

All that the State players and staff – including head coach Richard Williams – could see from their seats on the Delta charter jet were hundreds of lights.

“It was like that scene from ‘Field of Dreams,’” said former player Whit Hughes, now a businessman living in Madison. “You could see headlights for as far as you could see on the horizon, people wanting to get to the airport and celebrate.”

As the team’s jet taxied toward the terminal, the State traveling party witnessed an enormous crowd of fans cheering and ringing cowbells to welcome home their conquering heroes.

“It was a madhouse. I’ve never seen an environment like that,” added Hughes.

The back-to-back regional wins by the No. 19-ranked (Associated Press) Bulldogs over the No. 3 Huskies and No. 7 Bearcats has to be considered the greatest back-to-back victories in the program’s history.

“When you beat two of the top teams in America on that stage, it doesn’t get any better,” said former player Dontae’ Jones. “Without those two wins, we don’t make history, we don’t go to the Final Four.”

State’s journey to the Final Four in New York/New Jersey started the season before, when the Bulldogs upset No. 4-ranked Kentucky in Lexington during the regular season.

The 1994-95 team would make its own history, advancing to the program’s first Sweet Sixteen. The Bulldogs would lose to eventual national champion UCLA in the regional semifinals in Oakland, but for State fans there was reason for optimism going forward.

“We felt we were pretty darn good,” said Wilson, now boys basketball coach at Itawamba AHS. “We needed the right recruit to come in and help us. That was Dontae’ Jones.”

Hughes believes the Final Four road can actually be traced back to his redshirt freshman year (1993-94), when State won 18 games, but was overlooked by the NCAA. That team lost in the first round of the NIT.

“Those players had a chip on their shoulder moving forward,” he said.

One could even trace State’s success back to Williams’ 1990-91 team that won a share of the SEC regular-season championship and was awarded an NCAA tournament bid. Prior to that season, the Bulldogs’ lone visit to the NCAA’s postseason had been in 1963, when coach Babe McCarthy’s team had to sneak out of state to play a racially integrated Loyola-Chicago team.

The 1995-96 team’s season opened with Midnight Madness practice on ESPN, included a dismal 3-4 start in SEC play, and ended with an SEC Tournament championship against eventual national champion Kentucky and the berth in the Final Four.

“That season we were so geared to beating people with defense and rebounding,” Hughes said. “It came down to leadership. You had Darryl Wilson and Jay Walton, who were the heart and soul of that team.”

He added, “You never had to question whether anybody on that team was willing to do whatever it took for the team to be successful. We were a bunch of Mississippi and Alabama boys, except for Dontae’, who was from Nashville. None of us were high-profile recruits. And for a period of time, we were playing the best basketball in the country.”

Rupp Arena, the site of the State’s upset win against Kentucky the year before, became the facility where the program would achieve all-time greatness.

“When a regional is hosted in a facility (Rupp) where you can draw on positive memories and experiences, those are the small things that can be very helpful establishing the momentum you need to go on a postseason run,” Hughes said.

The confident Bulldogs, behind Wilson’s deadly perimeter shooting, would knock off the region’s top-seeded UConn Huskies, 60-55, to reach the Elite Eight.

Wilson connected on 7 of 11 3-pointers and scored a team-high 27 points.

“It was like Darryl was shooting through a hula hoop,” said Jones, now the director of Nashville’s youth basketball program.

Wilson knew right away he was going to have a good night shooting. He connected on his first five shot attempts. By the time he missed an attempt – with 4:02 left in the first half – State was leading 35-19.

“I hit that first shot, then the second and third shot,” he said. “I was on fire. I was getting good shots, shots I’d taken for three years.”

“Marcus Bullard defended Ray Allen,” Hughes said. “He limited him in ways the UConn coaching staff and their players didn’t expect. That was a high-powered offensive team and they made runs, but we answered every time.”

Sunday’s regional final against No. 2 seed Cincinnati was more of a home game for the Bearcats – whose home arena was 82 miles from Rupp.

State’s players, who heard all about the Bearcats’ physical strength from reporters in a pregame press conference, were primed for battle.

“I remember Erick Dampier saying, ‘We lift weight at Mississippi State, too,’ ’’ Hughes said. “Our offseason conditioning program with Richard Akins was crucial. We always had an advantage. We were always bigger, stronger and in better condition than virtually everybody we played against.”

Added Wilson, “We weren’t afraid of anybody. We were tough guys who didn’t want to lose.”

Jones, who would win the regional’s MVP honors, scored on six of his first seven shot attempts to help State take a 23-13 lead on its way to a historic 73-63 victory. Dontae’ finished with 23 points, 13 rebounds and two blocked shots.

“I was a post player most of my career before junior college and college,” Jones said. “I wasn’t afraid to take a shot inside the post. Coach Williams’ system gave me the opportunity to get in spots that were comfortable for me. In that game, I was fortunate to get some good looks.

“Coach Williams was a stickler about me not shooting on my first touch. I would always make the rotation pass, then get myself in position – if the ball rotated to me again – to score.”

The first was Wilson’s lone 3-pointer, which came with 4:25 remaining to give the Bulldogs a 63-47 lead. He banked in the NBA-range bomb from the top of the key.

Next, with Cincinnati racing down the court on a 3-on-1 break, Hughes took a charge at the free-throw line from the Bearcats’ 6-9 center Art Long. Wilson was so excited, he jumped on top of his smiling teammate to congratulate him.

Williams would say years later Hughes’ play – and Wilson’s reaction to it – was the “epitome” of the team.

“Darryl and I had a season-long contest to see who could draw the most charges,” Hughes said. “Darryl got in my face and said, ‘I love ya, but I’m still going to end up with more charges than you.’’’

As the final horn sounded, freshman point guard Bart Hyche fired the ball into the air before being tackled by an enthusiastic Hughes.

“This team had a high basketball IQ. The coaching staff had good game plans,” Hughes said. “We had a bunch of guys on that team who didn’t want to go home.”

When the amazing three-day, two-game run by the Bulldogs ended that Sunday afternoon in Lexington, the great Bailey Howell, an All-American at MSU and NBA All-Star with the Boston Celtics, was standing courtside watching the celebration.

“They are the greatest team to ever walk on a basketball court at Mississippi State,” he said.

Syracuse, coached by the legendary Jim Boeheim, took advantage of 21 State turnovers and used its match-up zone defense to neutralize the Bulldogs’ shooting in an eventual 76-69 win in the national semifinals at Continental Airlines Arena in East Rutherford, N.J.

“If you don’t put the ball in the hole, you’re not going to win,” said Wilson, who led State with 20 points and six 3-pointers. “We also had way too many turnovers.”

Added Jones, “It just wasn’t our night. If we played nine more times, I think we’d beat them nine times.

Hughes looks back at the Syracuse loss as a missed opportunity.

“We were prepared as we could possibly be,” he said. “Syracuse defends you with the match-up zone, something you don’t see often. It just wasn’t our night. We didn’t take care of the basketball in the second half. We pressed a little on our shot selection.”

Wilson, who was inducted in 2019 into State’s athletics Hall of Fame, put a positive spin on the Final Four trip.

Hughes said there was definitely no lack of confidence by the team in the Final Four, especially after its magical run in Lexington.

“In a one-game setting, I would have put our team against any in the country at that time,” he said. “Coach Williams told us this experience will be part of our identity the rest of our lives. That is so true.”