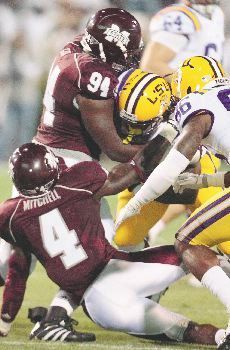 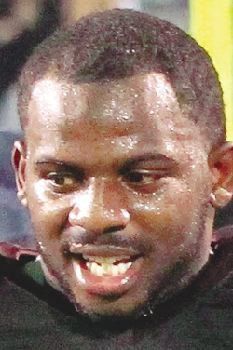 Mississippi State's junior defensive lineman has collected a lot of accolades this season, but none mean as much to him as the one he earned Monday: Pro Football Weekly named Cox a first-team All-American.

It was a lifelong goal fulfilled.

"I always wanted to be an All-American once I got to college," Cox said following Monday's practice. "I made it, and I'm happy. Another goal achieved."

Cox is the first MSU defensive lineman in 20 years to be named All-American - Nate Williams was a third-team pick by Football News in 1991.

According to its news release, Pro Football Weekly "puts an extra premium on true talent and draft value in the selection process." Cox has said he'll return for his senior year.

A change for Robinson

Damien Robinson knew how much work he had to do upon arriving at State, and he's tackled it head on. Now the redshirt freshman is taking on a position change.

Robinson, a backup right guard who saw only a few snaps this season, is working at right tackle this week. It could become a permanent change as coaches seek a replacement for senior Addison Lawrence.

"Damien's worked hard," MSU head coach Dan Mullen said. "He's a freshman right now, and as a freshman you expect him to be at a certain level, and he's starting to understand the game and understand the offense and improve daily as a player."

Robinson (6-foot-6, 310 pounds) has been taking notes from Lawrence and senior Quentin Saulsberry, who took over at right guard after Tobias Smith was injured. Robinson came in from Olive Branch very willing to learn, even though he was a four-star prospect and one of the top recruits in Mississippi.

He's done that thanks to offensive line coach John Hevesy and strength coach Matt Balis. Robinson is in good position to battle guys like Blaine Clausell, Archie Muniz and Daniel Knox for the starting job at right tackle.

MSU received its 23rd commitment of the 2012 class on Monday. Justin Senior, an offensive lineman from Hargrave (Va.) Military Academy, committed to the Bulldogs, according to several scouting service websites.

Senior (6-6, 305), who originally hails from Montreal, will reportedly enroll at MSU in January.