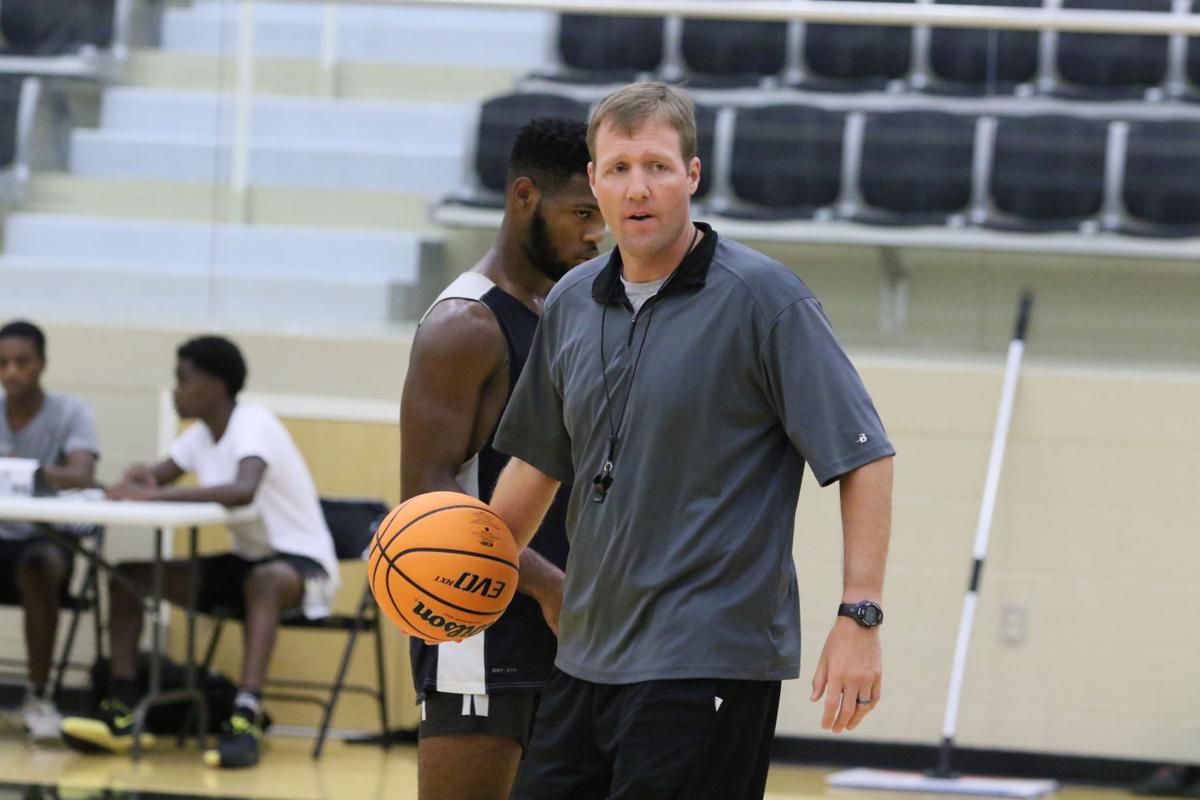 Adam Kirk is entering his sixth season as the head coach of Ripley. Over the last five seasons, his Tigers have accumulated a 127-26 record and two 4A semifinals apperances. 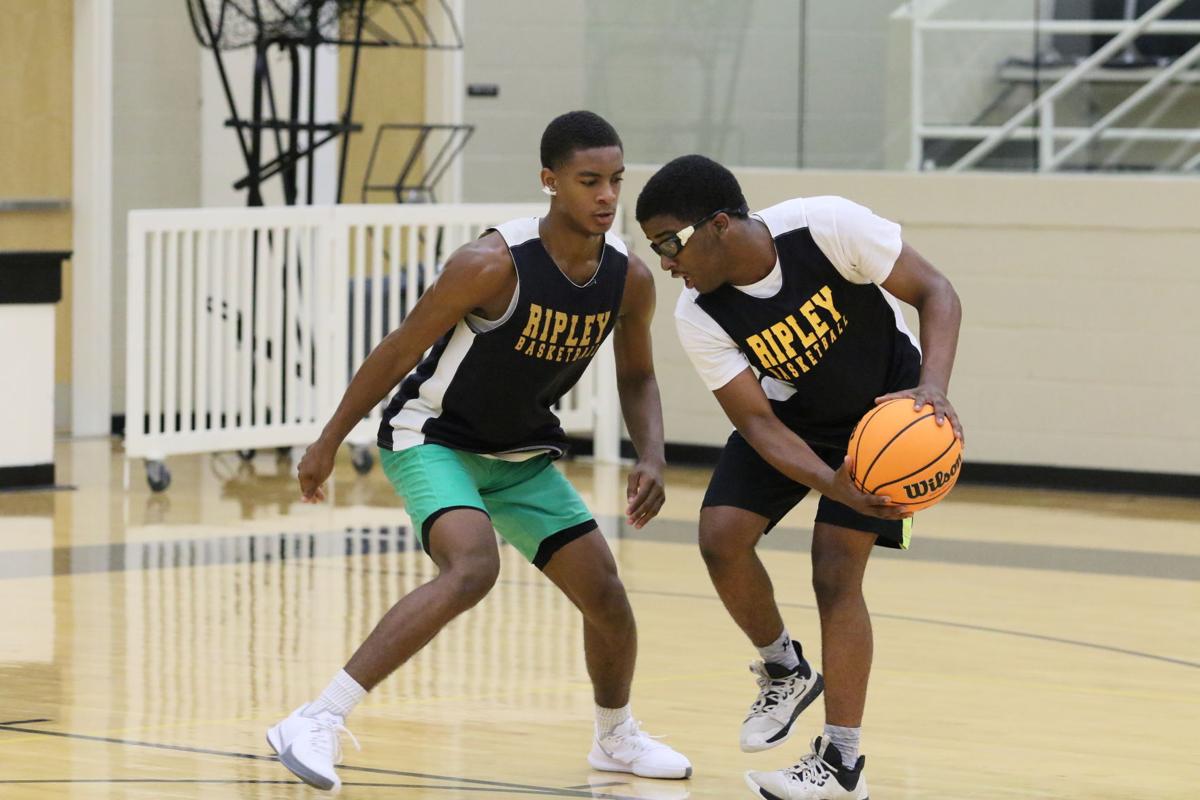 New Albany transfer Albert McDonald (left) works on defense against Kyree Hamer. McDonald will be a junior next season. 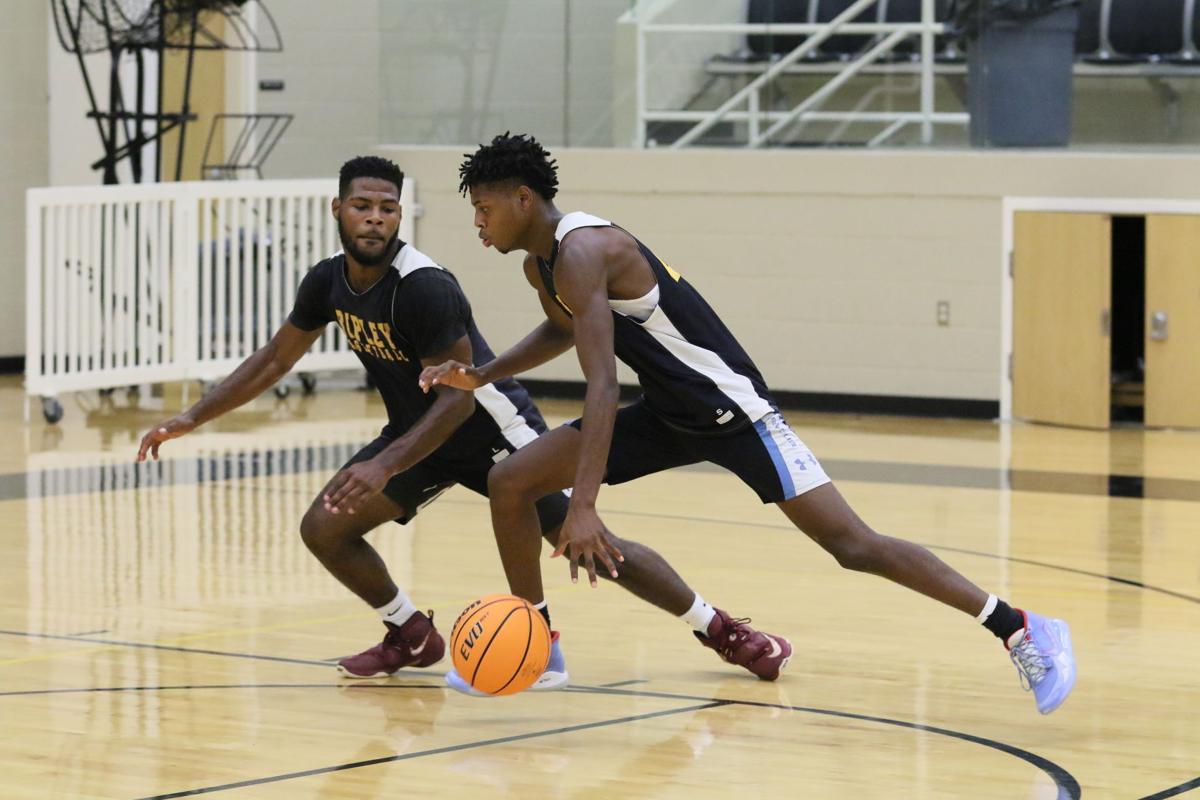 Rising junior LaTrell Vance attempts to drive past his brother, LaBron Vance, during a drill in practice. Both brothers are called upon by their head coach Adam Kirk as players he needs to step up next season. 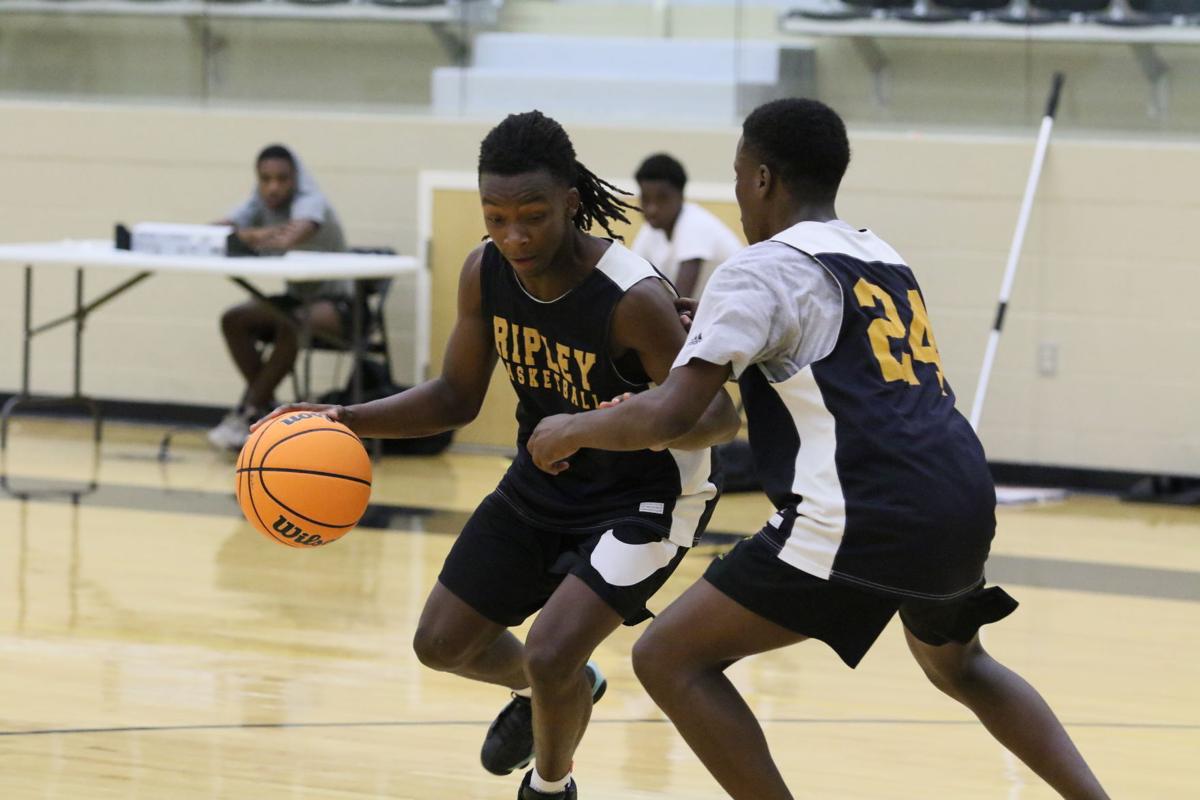 Sentavius Hunt, a senior, works in the paint as Chazton Crudup defends him. Hunt returns with the most experience of any of his teammates.

Adam Kirk is entering his sixth season as the head coach of Ripley. Over the last five seasons, his Tigers have accumulated a 127-26 record and two 4A semifinals apperances.

New Albany transfer Albert McDonald (left) works on defense against Kyree Hamer. McDonald will be a junior next season.

Rising junior LaTrell Vance attempts to drive past his brother, LaBron Vance, during a drill in practice. Both brothers are called upon by their head coach Adam Kirk as players he needs to step up next season.

Sentavius Hunt, a senior, works in the paint as Chazton Crudup defends him. Hunt returns with the most experience of any of his teammates.

RIPLEY • Adam Kirk is going back to the basics this summer as he prepares his team for the 2020-2021 basketball season.

The Tigers got back on the floor June 1, working on getting back into basketball shape as well as finding out a little more about themselves.

“Our workouts have been good,” said Kirk. “We've had good attendance. I think the kids were wanting to get out and do stuff so they've shown up and worked hard. Even when we couldn't do very much and we worked with just one ball for each individual, they worked at it. You can tell which guys had worked out during quarantine and which ones had not. It was pretty obvious within the first day of workouts.”

The Tigers lost eight seniors from last season's team that went 28-4 and reached the Class 4A semifinals in Jackson. Replacing those eight has been a focal point of the summer for Kirk.

Kirk's teams at Ripley, including last year's successful unit, is widely known for their defensive prowess but with such a young, inexperienced group returning, his says his summer practices have been split 50-50 on working on both sides of the court.

“Well, we've been trying to go half and half,” said Kirk. “That's probably pretty normal for us. We might have done a little more defense. But I've started over. We've lost so many guys off of last year's team that our first day we could workout as a team, we went back to the same practice I did the first time I practiced at Ripley. I just assumed that nobody knew anything. So we've been working from the ground up again. We've tried to break it half and half and I guess my mentality is that we just need to compete. Whether it's an offensive drill or a defensive drill, the competitive kids are going to step up and I want to play with competitive kids. I just want five to nine kids that want to compete and I think if we can find that, we will be alright but we are still searching.”

Kirk mentioned that a negative stemming from the COVID-19 pandemic is that his team is not able to compete in cross-member competition to limit exposure of the virus between multiple teams so the only looks he is able to get of his team is in practice between themselves.

The lack of summer games places more urgency within Kirk to figure out how to replace not only the production of the eight seniors lost, but their leadership as well.

“For us, most importantly, is trying to figure out who is our leader,” claimed Kirk. “When you lose a lot of points and rebounds and game experience, now it's who's going to step up and hold the team accountable? I think we are still a work in progress. I think we will be a work in progress for a while. I do think there are some guys that are capable. Sentavius (Hunt) has played a lot of minutes. He's a guy that we will look to as a senior and we expect a lot out of him as a defender. Some other guys are going to have to step up and go from a JV mentality to a significant contributor mentality. One of those guys will be LaTrell Vance, who played quite a bit last year but now he will go to a focal point on both ends of the floor and I think he's going to have to be ready to play. I think you look at guys like Chaz Crudup, that has played a lot of minutes and been around in JV, him and Seth Thomas, LaBron Vance and Kyree (Hamer), those guys have got to step up now. They've been around me and they know what's expected. Can they take it and put it on a varsity court? That will be determined.”

One duo that could help the Tigers as they look to fill some major roles is a couple of transfers from New Albany, brothers Albert and A'Quan McDonald. Albert, the oldest of the two, is heading into his junior season as A'Quan will be a sophomore. Both have been with the Tigers since the June 1 start back and have been impressive in the short time they have been under Kirk's guidance.

“Albert and A'Quan are both athletes that are quick but Albert in particular has gotten playing time. He has experience,” said Kirk. “We don't return a lot so him and Sentavius are probably our most experienced guys because he played some at New Albany. So he's been in tough games. Both kids fit with what we like to do. They both are quick and athletic and they will get down and guard. Obviously, us and New Albany are two different styles so it's been an adjustment for them but it's a good problem to have. I think both of them can help us at some point, especially rebounding and scoring around the basket and defending.”

With question marks surrounding his team, some of the options Kirk can turn to are not what he is typically used to but is certainly not scared to try. Ripley's basketball program received an influx of talented freshman that within the first month and a half of practices, have proven that they belong.

The group has shades of Jesus Ruedas, Asa Howard and others that were seniors last year but saw playing time as freshman themselves back in 2016-2017.

“All summer we've have split into two groups, one reason based off COVID restrictions and the other based off age and kind of where they are at,” said Kirk. “In a way, it was a way for guys to get equal opportunity and get reps for me to evaluate them because we had so many guys leave, I want the best eight. I don't care if they are ninth graders or seniors, the most competitive kids will find a way to get on to that court. So that's what I've tried to encourage them with. Not only are you competing for a jersey but you're competing for playing time. And I think there is a couple in that ninth grade group that if they can get stronger, they can play. I'm not scared to play ninth graders. If they can help us, then I will throw them out there, especially if they fit what we do. If they will guard, if they will play hard, if they will compete, I have no problems with sticking them out there.”