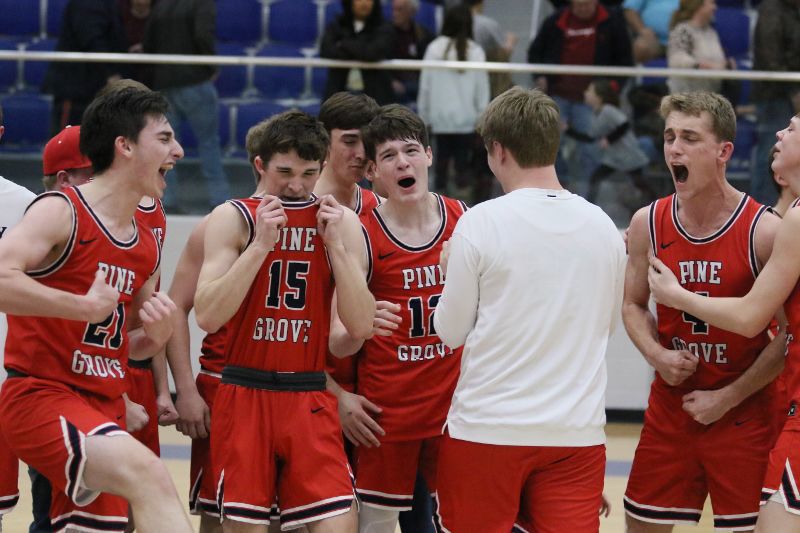 Pine Grove players celebrate following a 52-48 win over Biggersville on Friday night for the Div. 1-1A championship. 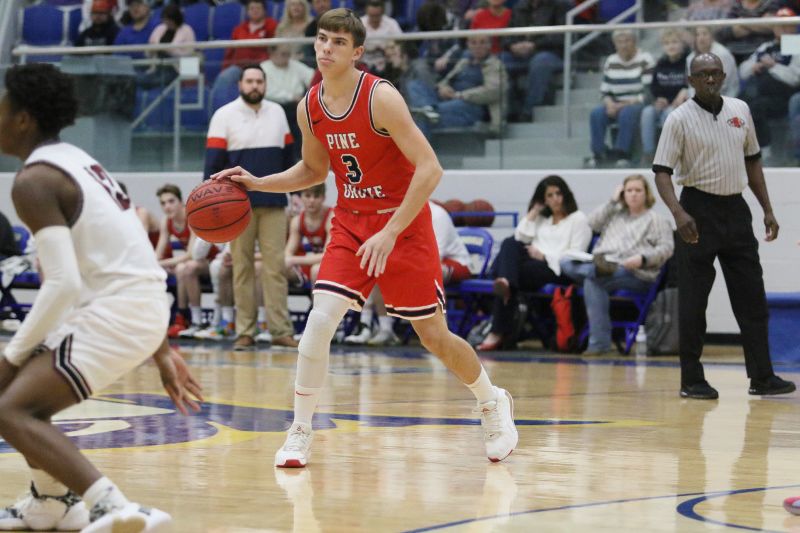 Pine Grove's Carson Rowland poured in a game-high 22 points, including 16 points in the second half to guide the Panthers to a 52-48 win over Biggersville in the Div. 1-1A championship game.

Pine Grove players celebrate following a 52-48 win over Biggersville on Friday night for the Div. 1-1A championship.

Pine Grove's Carson Rowland poured in a game-high 22 points, including 16 points in the second half to guide the Panthers to a 52-48 win over Biggersville in the Div. 1-1A championship game.

BOONEVILLE • Pine Grove put all of Class 1A on notice last Friday night with a thrilling 52-48 win over Biggersville in the Div. 1-1A championship game.

The Panthers led for nearly the entire first half but fought back from a 10-point deficit in the second half to claim the No. 1 seed entering the Class 1A playoffs.

"This is amazing for these kids," said Pine Grove head coach Jake Walker. "They fought hard last year and we didn't have the outcome we wanted. We had some kids in some difficult situations that I just kept preaching that we can get through this and it's going to pay off. Biggersville is an amazing team. They are physical. They are fast. They have eight guys that know exactly what they need to do. This win is just huge our guys."

Pine Grove's leading scorer Carson Rowland scored the first six points for the Panthers as they held a 6-3 lead early in the first. Rowland picked up his second foul at the 3:50 mark of the first quarter and sat the rest of the first half.

With Rowland's absence, Biggersville came back to take a 9-8 lead into the second quarter. But to open the second, senior Cade Wilder and freshman Jack Hudson connected on back-to-back 3-pointers on the first two possessions. Keaton Wilkerson came away with a steal near mid-court and raced to the other end for the easy layup for an 8-0 run and the 16-9 lead.

The Lions battled back to tie it 18-18 before Wilder scored a basket plus the foul with 2:03 left for his eighth point of the quarter and the final basket of the first half for Pine Grove, who took a 21-20 lead into the locker room.

"That was huge," claimed Walker. "We've battled it. We practice it. We understand how good Carson is and how much of a focal point he is. He's not going to be able to do it by himself and we've continued from day one to get those guys better. And for him to be on the bench and those guys step up and follow our game plan once he went out, we went into the half up a point."

Biggersville came out in the third quarter with a little more intensity and pieced together a 11-0 run to start the second half, building a 10-point lead, the largest for either team in the game. With a double digit deficit, Pine Grove turned to their star in Rowland and senior Mason Bullock to guide them back. Rowland ended the run with a layup but was quickly answered on the other end by Biggersville's Telick Barnett. Rowland then gathered his own miss for a putback and assisted to corner 3-pointers to Bullock for an 8-0 run to pull the score to 33-31. Hunter Stacy scored on an old-fashioned three-point play late in the first but Rowland responded with a 3-pointer to send the Panthers to the fourth quarter down 36-34.

The Lions scored four quick points to start the fourth for a six-point lead. Rowland and Wilder combined for a 7-0 run, including another Rowland trey for their first lead of the second half at 41-40 with 5:27 to play.

"Even when he was sitting out, he was up and probably talking to them as much as I was," said Walker on Rowland. "He was encouraging. He is a smart basketball player. He's worked and worked on his outside shot and it has paid of big time for him this year. He's hit some big threes for us. He knows where the open guys are and does a great job of finding his teammates."

The two teams traded the lead back-and-forth before Rowland went 4-for-4 from the charity stripe for the 47-44 lead. Pine Grove held on to that lead the rest of the game with a layup and two free throws from John Bullock down the stretch and with Rowland picking up his fifth foul. Wilder sealed the game, splitting a pair of free throws with two second left.

Rowland finished with a game-high 22 points in only about 18 minutes of game time. Wilder added 13 points in the win.

The Panthers (25-5) will host Coldwater on Tuesday in the first round of the playoffs. Walker hopes that a monumental win like their win over the Lions (24-2) on Friday night can carry over into this upcoming playoff run.

"It is a different opportunity than we are used to, being able to play at home," Walker stated. "I'll be honest, they know me, I'm a grumpy old guy. We celebrated pretty good for about five minutes there. This was a part of it. This was a part of our goal but we if we let up and fall asleep on Tuesday then nobody is even going to remember it. We have bigger plans. They are young but man, they are some tough kids. They want it. They are hungry for more and I've got to do a good job of getting them ready for Tuesday."