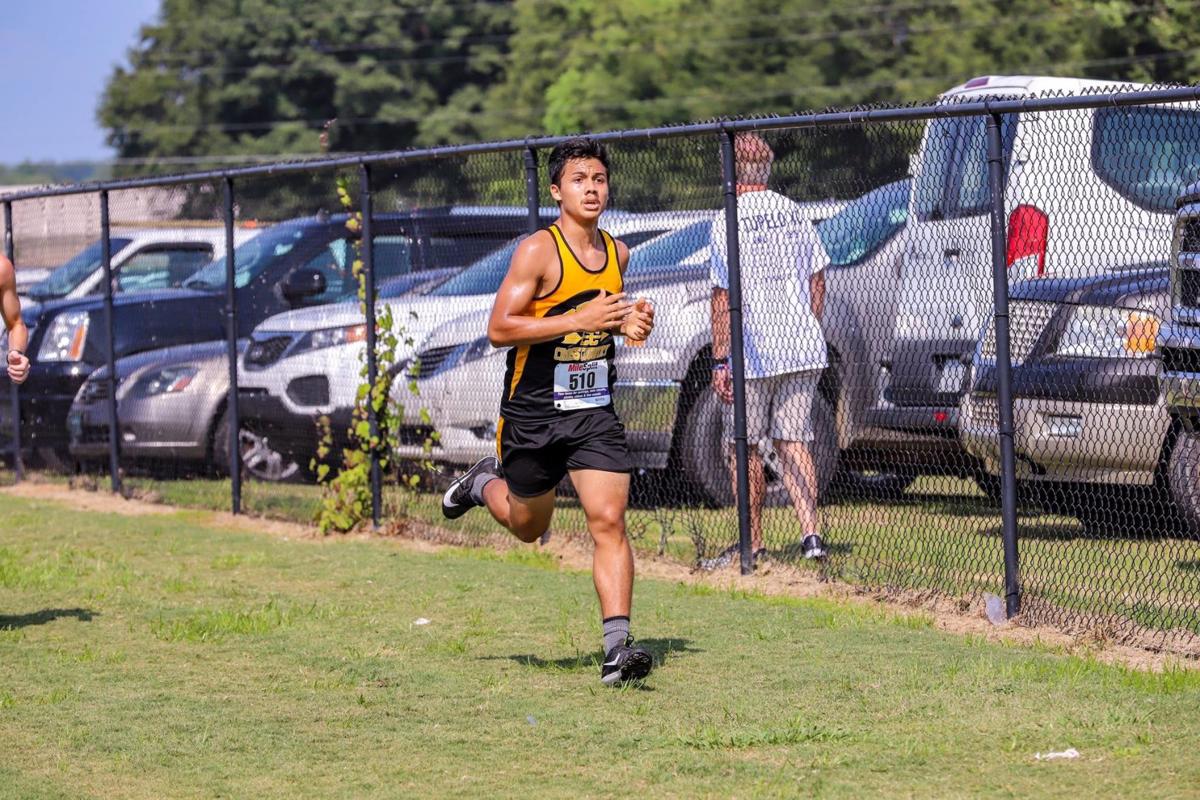 Jesus Ruedas was named to the Class 4A All-State Cross Country team after placing 13th at the state championship meets in Clinton. 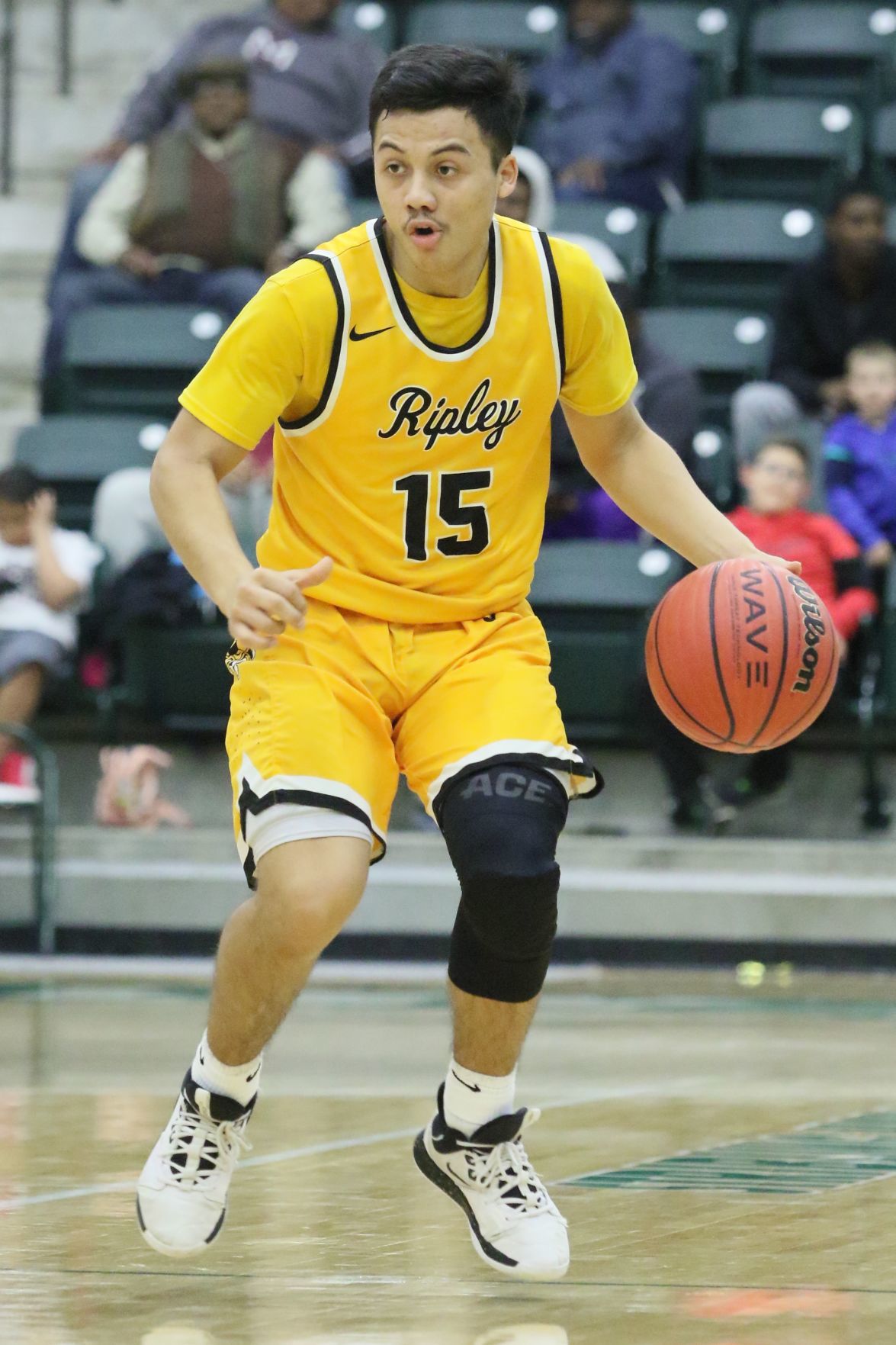 Jesus Ruedas averaged 13 points per game in his senior season, leading the Tigers to a 28-4 record and a Class 4A semifinals appearance.

Jesus Ruedas was named to the Class 4A All-State Cross Country team after placing 13th at the state championship meets in Clinton.

Jesus Ruedas averaged 13 points per game in his senior season, leading the Tigers to a 28-4 record and a Class 4A semifinals appearance.

RIPLEY • When the name "Jesus Ruedas," is mentioned in Tippah County, it's hard not to picture him with a bright gold jersey with the No. 15 on it, running around a basketball court, helping Ripley to another win.

But what many don't associate with Ruedas is his success as a runner in cross country. The 2020 graduate helped guide the Ripley boys cross country team to a fourth place finish in the Class 4A meet this past season as he placed in 13th individually with a time of 18:19.33, earning All-State honors.

His success in the fall as a runner was only topped by his success on the hardwood as a senior. Ruedas averaged 13 points, three rebounds, four assists and three steals per game to lead the Tigers to a 28-4 record and a Class 4A semifinals appearance at the Mississippi Coliseum.

Ruedas' dominant display didn't go unnoticed by college basketball coaches either. As the season ended, he picked up several junior college offers, setting the table for a decision to be made.

His decision was to leave the basketball court behind and chase a bachelor's degree at Blue Mountain College as a cross country runner.

“It was a hard decision, I'm not going to lie,” said Ruedas. I had maybe eight or nine JUCO basketball offers but one day I was laying down after a game and I started thinking that this wasn't going to be for me forever. Junior college is only for two years and I'm trying to get my degree so I called Coach (Heather Duley) and told her that I was interested in running. Then towards the end of the season, I started thinking about if I had an injury in basketball and I wouldn't get to finish out my degree. That was one of the biggest reasons why, because I can do this for four years and I won't have to pay anything.”

His choice of sport didn't come as a surprise to either Adam Kirk or his wife, Emory. Adam served as Ruedas' basketball coach the last four years and Emory coached him in cross country the past four seasons as well.

"I wasn't completely shocked by his decision to run cross country," said Adam Kirk. "Jesus is a very appreciative person. If you go out of your way to help him, he will always be loyal to you. Coach Duley at BMC made Jesus a priority in the recruiting process and dedicated a lot of time in preparing him to take the ACT. She made an impression. Plus, Jesus has had a job since I came to Ripley. Just from that standpoint, I think his decision to focus on cross country showed a lot of maturity. His basketball options were all junior college and he said if I take that route then in two years I am back looking for options to pay for school. BMC made him a priority and made a commitment to give him a scholarship for the duration of his running career. The long term investment decision is not one a typical 17 or 18 year old can make. To me, that just shows his maturity."

"Jesus was for sure a stand out in basketball and I am sure it came to a shock to a lot of his fans that followed him and cheered for him at games that he choose cross country. The choice didn’t shock me at all," Emory added. "When I became the cross country coach for Ripley, one of my goals was to share my love of running with my runners. Jesus has that love for running and those that watch him got to see that passion in him. Just like everything he does his hard work at practices, his extra miles he would put in behind the scenes, and his leadership is what makes him successful. I am so excited to see what he does for BMC Cross Country, especially because he will get to put all his focus into a sport that he loves."

Ruedas' basketball career is one to marvel at. In four seasons, he has helped the Tigers to two semifinals appearances in 4A and has helped accumulate a 104-19 record over that span.

One thing he has always had to overcome in basketball was his appearance. When Ruedas took the floor for pre-game warm ups, it wasn't hard to notice that he didn't look like the rest of the players on the floor. At 5-foot-8, Jesus was at a size disadvantage from the start. Add in the fact that he is of Mexican descent, he always stood out. But he says those factors motivated him to not only play his best but to be an inspiration to others.

“I was so blessed with all those offers but I wasn't very blessed with height,” Ruedas said with a laugh. “If I had some more height it would be a different story. But God gave me this height for a reason. I want to say it's inspirational in a way because a lot of kids now days think you have to be 6-foot or 6-foot-1 to be good but you don't have to be that tall to be good. I always tried to show that.

"And I always wanted to inspire other Mexicans to play all over Mississippi. There wasn't a lot of Hispanics out there playing and for me to perform at a high level was very inspirational, especially for my parents because they were like the only Hispanics in the stands besides my friends so I wanted to be an example for others one day."

Ruedas' dream of attending college was reached when he signed last Thursday. Blue Mountain College brought in seven signees in a ceremony to celebrate the occasion. That moment was something he said he won't forget.

“I was anxious a little bit. I didn't know as much as my other teammates knew about running. I didn't know about the diet, the pace or anything like that so I was just nervous because I know I'm going into a different level of running," said Ruedas. "But at the same time, I'm ready to work. When I was signing, I couldn't help but think that I was the first in my family to go to college. My family is so happy for me, knowing if everything works out, I'll get my degree. It was really special.”

Ruedas said he hopes his years of hard work both on the trails and in the gym pays off when he gets to BMC in the fall. He thinks being a multi-sport athlete in high school has prepared him to help his future teammates, mainly in an area where he has always excelled—mental toughness.

“I know I can run fast. I can run for a long time,” said Ruedas on what he can bring to the table. “I think a lot of cross country runners think that basketball is just what it is but you have to really work like I've been doing since I was 12. That's what has helped me the most in cross country because I felt like I took in more pain than any other player because I worked so hard and I knew how far my body could go. I know that I can help my teammates at Blue Mountain College and they can push me and work on being more mentally tough. I feel like I was always more mentally prepared than any other player or runner that I competed against.”

His toughness and determination is a big reason why Ruedas will long be remembered as one of the greats in Ripley basketball history.

"I think people will talk about Jesus for years to come," said Adam Kirk. "People see all the success and accolades from the past two years but it wasn't always easy. His first year he practiced against Dewayne (Cox) and Iverson (Smith) everyday. There were plenty of really, really ugly days for him and he rarely ever played but he stuck with it and didn't quit. He and several members of this senior class represent what we are all about—we play hard and compete. We aren't the biggest or most athletic but we try to compete for 32 minutes. Whether Jesus was in the gym, running a 5K, or in class at Ripley, he competed. To me, that is one attribute that he will carry with him at BMC and into adulthood. I couldn't be more proud of him as a person."