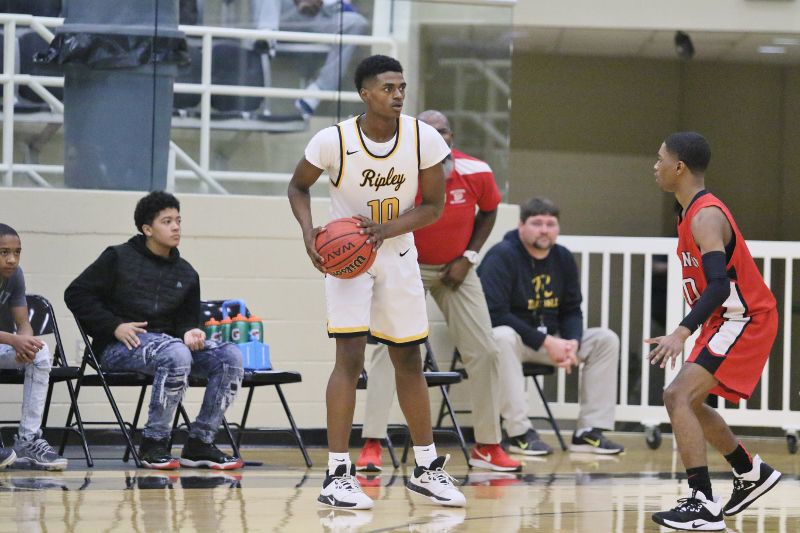 Ripley's Asa Howard scans the floor for the pass. Howard dropped 17 points in the Tigers' win over Shannon last Thursday. 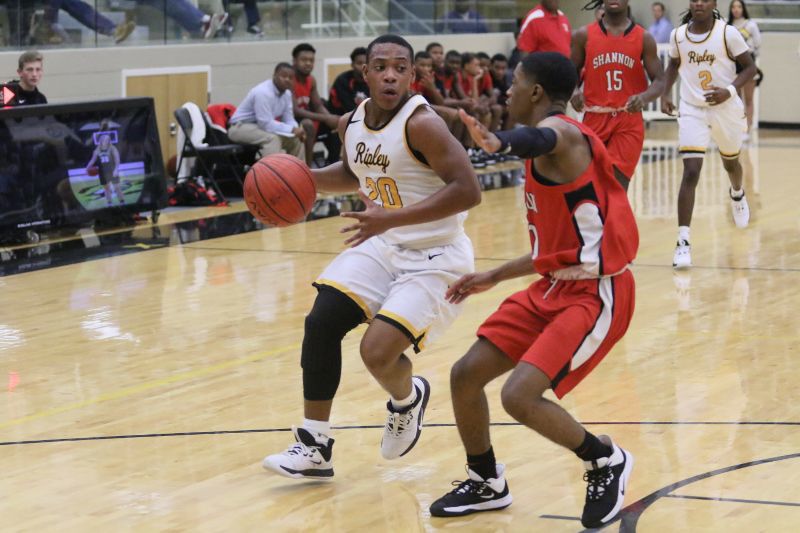 Ripley's Cam Rucker goes up for the layup with the Shannon defender guarding him. Rucker led all scorers with 20 points on four three-pointers against the Raiders.

Ripley's Asa Howard scans the floor for the pass. Howard dropped 17 points in the Tigers' win over Shannon last Thursday.

Ripley's Cam Rucker goes up for the layup with the Shannon defender guarding him. Rucker led all scorers with 20 points on four three-pointers against the Raiders.

RIPLEY • The Ripley Tigers picked up their fourth win of the season last Thursday in a tightly-contested game against Shannon. The Tigers used an 8-0 run to begin the final quarter to pull away with the 53-46 win over the Raiders.

Ripley led 41-37 at the end of the third quarter after a three-pointer from Cam Rucker. The three-point line was the Tigers' companion in their run to start the fourth. Sophomore LaTrell Vance buried a triple to open the scoring in the fourth and then split a pair of free throws for four quick points. Asa Howard followed that with a three-ball of his own with Rucker adding a free throw to cap the 8-0 run, building a 12-point lead with 4:23 remaining in the game.

That 12-point lead was needed as Shannon made things interesting down the stretch. The Raider ripped off a 9-0 run spanning over three minutes, going 6-of-8 from the free throw line and senior Kobe George nailed the Raider's only field goal of the quarter with a three-pointer with 28 seconds left to pull within three of the Tigers. Rucker held off the Raiders' comeback attempt with a pair of clutch free throws and a layup at the buzzer.

Rucker finished the game with 20 points to lead all scorers. Rucker shot 4-of-6 from beyond the arc and grabbed seven rebounds in the winning effort.

The senior guard was instrumental for the Tigers in the first quarter. Rucker scored six points in the first as Ripley took a 14-10 lead into the second quarter.

Shannon opened the second on a 6-0 run to regain the lead with 6:47 left, prompting a Ripley timeout. Following the break, Howard knocked down a three-pointer and a floater in the lane for a 19-16 Ripley lead. Later in the quarter, Howard's basket plus the foul gave the Tigers a 25-24 lead. Before the quarter's end, the Raiders found themselves back on top before Rucker connected on his second triple of the night with 19 seconds left to give Ripley a 28-27 halftime advantage.

Five quick points on a layup from Jesus Ruedas and a three-pointer by Howard extended the Tigers lead to six early in the third quarter. Shannon battled back to within one before Rucker's huge three gave the Tigers a four-point lead going into the fourth.

Howard finished the game with 17 points and seven rebounds. The Tigers (4-1) struggled with 18 turnovers on the night, allowing the Raiders easy opportunities in transition.  Ripley shot just 36.1 percent from the field but held Shannon to just 31.8 percent shooting and forced 15 Raider turnovers. Ruedas led the Tigers with three steals and added five assists on a tough shooting night.